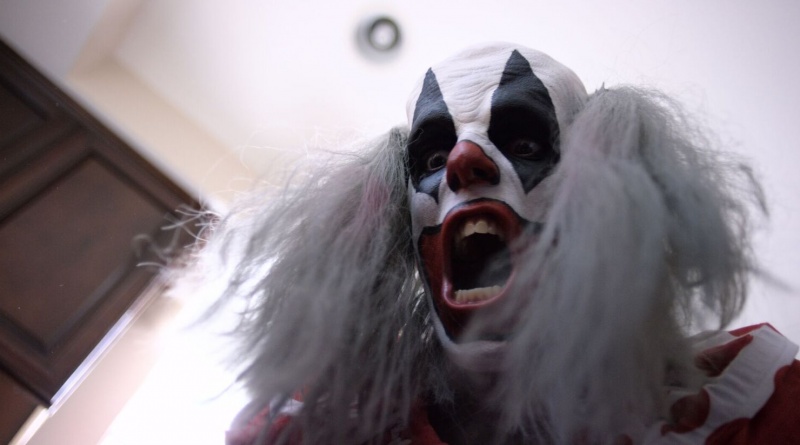 A creepy clown with a knack for leaving balloons as his calling card? Clowntergeist won’t win any originality awards, but at least it’s getting in on the thriller clown gimmick while it’s hot. Unlike It, Clowntergeist probably won’t force viewers to leave a nightlight on.

Pennywise was a straight up nightmare. Ribcage (Eric Corbin), the terrifying clown hardly works up legit uneasiness or dread. A lot of the fault there lies with the traditional horror movie setup with the only gimmick being the psycho is a clown.

Director/Screenwriter Aaron Mirtes largely keeps his film’s antagonist in shadows, rarely showing him in full view. That may work with the average horror movie boogeyman, but it comes off silly here. Close up shots of clown shoes and gloves are weak, fake scares. Ribcage also suffers from a generic design. It also doesn’t help that Ribcage lacks a personality and just speaks in zombie murmurs as he stalks his victims.

College student Emma (Brittany Belland) starts getting balloons with ominous messages. Emma just so happens to be deathly terrified of clowns. After the usual teases and blow-offs of the threat, Emma starts taking the random incidents seriously.

Emma doesn’t have to go it alone though with her best friend, Heather (the engaging Monica Baker), and potential love interest, Jonah (Sean Patrick Murray), having her back. Of the trio, Monica seems the far most competent. And the eccentric Mr. Randal (Burt Culver) has some risky ideas on stopping Ribcage, but he needs Emma’s help to basically play bait. 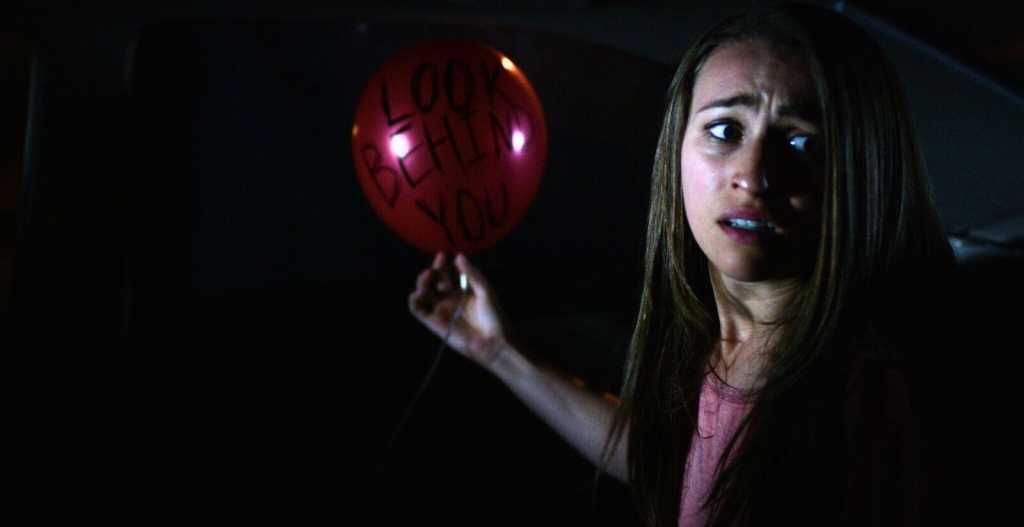 Mirtes’ script doesn’t do the characters a lot of favors as they have no plan beyond not get killed. That complete lack of survival instincts is the film’s biggest cheat. When Ribcage lumbers into the kitchen, they try a game of hide and seek instead of just ambushing him and politely let him grab one without helping their pals. There’s no attempt at all to fight back. Having such an impotent protagonists makes for a frustrating experience,

Clowntergeist is even more annoying as it appears to reset its few established rules just for the sake of a silly, unnecessary twist. Mirtes probably needed to give some of the extras larger roles to avoid having the same four characters getting clown stalked. Acting is around the expected B-movie level, but Belland and Baker play off each other fine, but are badly in need of better material.

There was reason to be optimistic early on as the first scene, featuring Randal’s daughter, suggests Mirtes knew the best lane for the film. A low budget standard horror movie with clowns. Cinematographer Chaz Olivier sets up some nice lighting in particular one hallway scene and the final encounter. 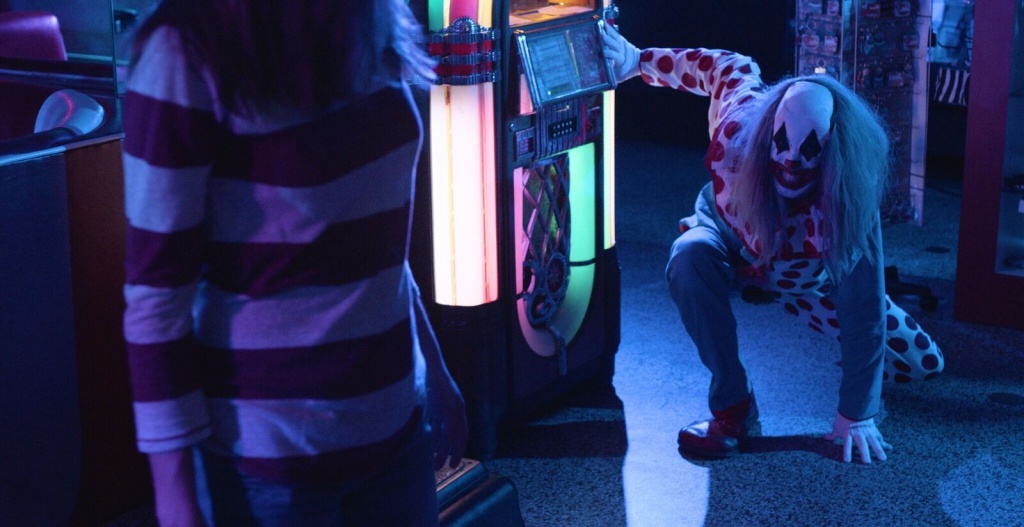 The film’s best gimmick is borrowed from another horror franchise, The Ring, with a time and date death declaration. This again makes the characters’ lack of self preservation irritating. Even when battling Death, the Final Destination characters at least tried to cheat death.

Thrillers may be the most challenging genre. Audiences want to be scared, but cynically don’t want to fully buy in. Mirtes sticks to a heavy diet of jump scares, which quickly reach the point of diminishing returns. Clowntergeist has some decent ideas, but nothing truly comes together to make for an effective thriller.