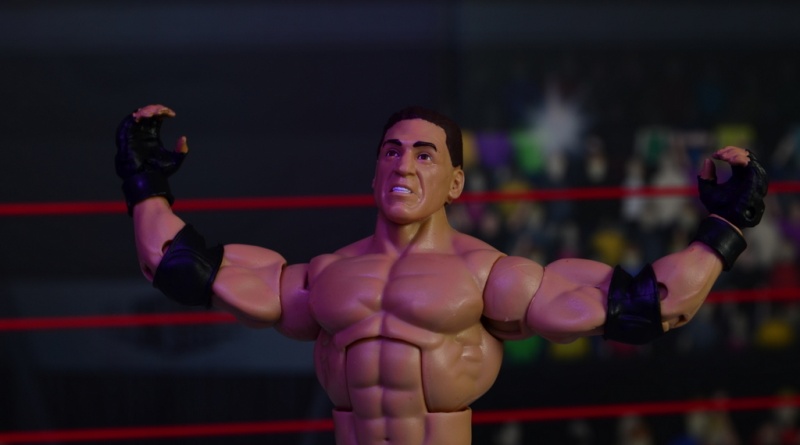 Ken Shamrock was one of my favorites in the early days of The Attitude Era. He had a ferocity and intensity few could match. I was pretty loyal to The Hart Foundation and later the Nation of Domination, but Shamrock stood out despite not being as charismatic as say a Stone Cold Steve Austin.

It’s surprising it took Mattel so long to finally get to making a Shamrock figure. Not only is he one of the more prominent guys left, but Ken knocks out another member of The Corporation — one of my favorite WWF/WWE stables. Time to knuckle up for this review.

Packaging: I doubt many people are going to be as happy as me when Mattel switches up the regular Elite line packaging. Or more specifically, ditches the red-heavy color scheme. 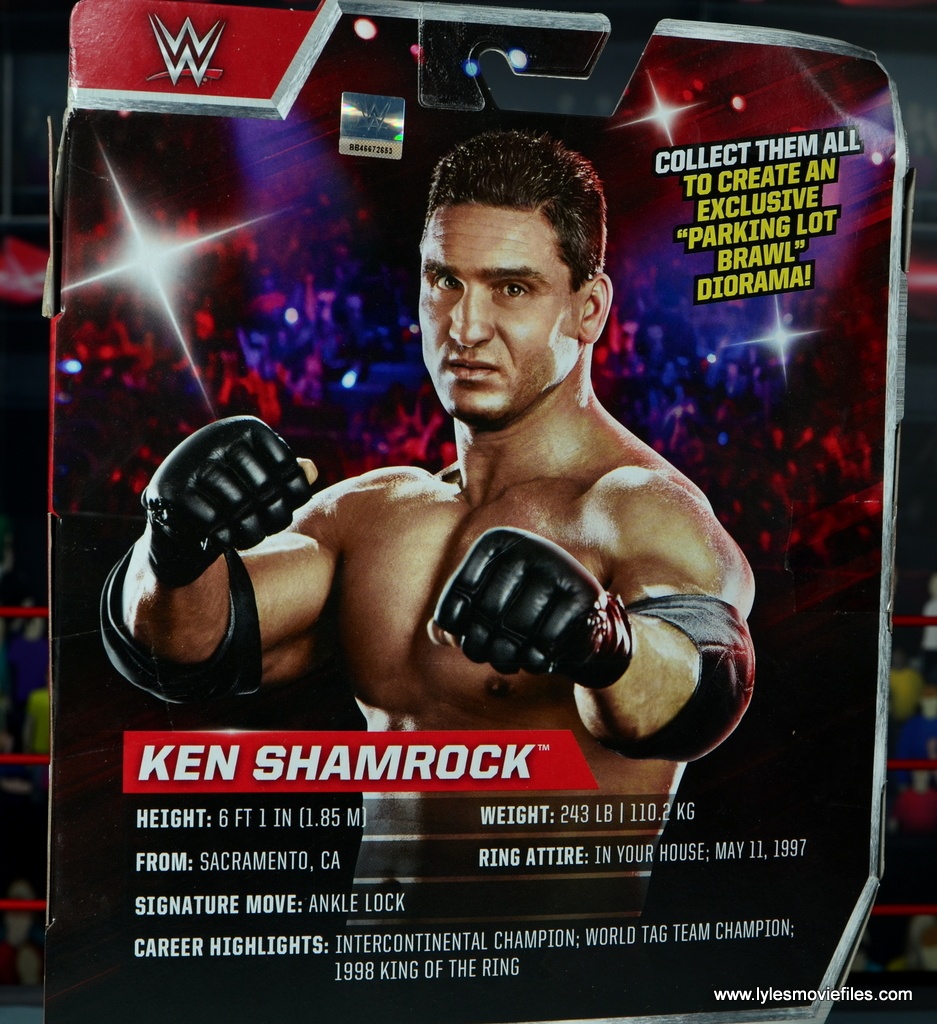 Unlike a lot of Legends/Flashbacks, Shamrock has the scratch logo, with no different accent color. Since he won several titles and accolades, Shamrock’s bio is reasonably well filled out. 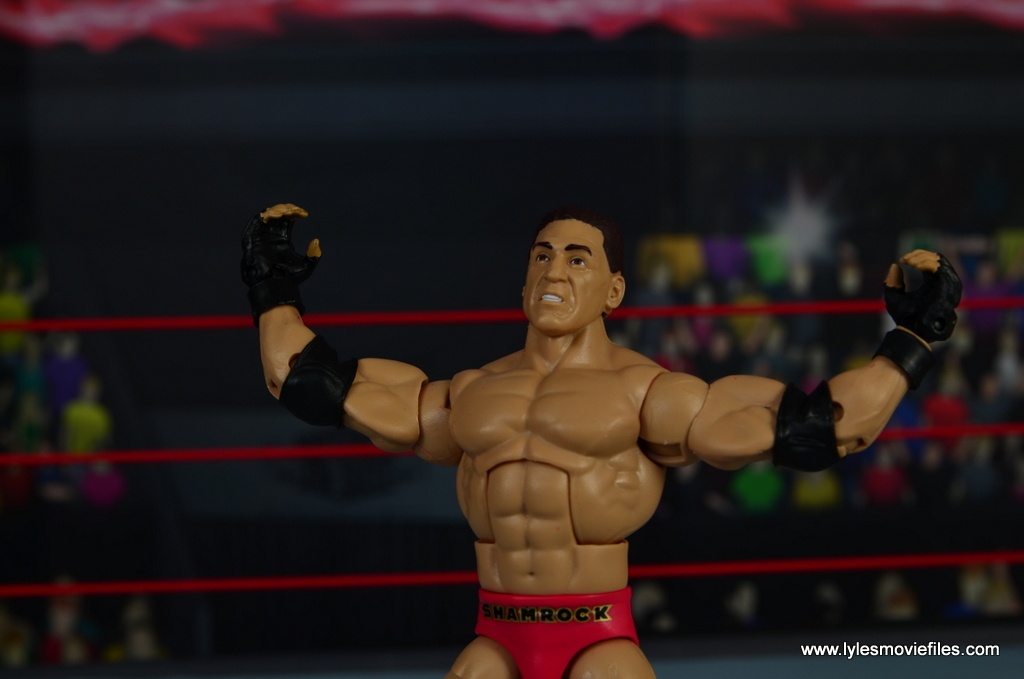 Likeness:  One of the cool things about Shamrock was how he had this ticking time bomb demeanor. It was more a matter of when, not ‘if’ he’d go off on somebody. The head sculpt captures him in explosion mode so he’s got a snarling face as if warning everyone to get out of his way. It looks like Shamrock, but I think I’d rather have that more calm face as it’s more threatening.

I’ll give Mattel credit for getting Shamrock’s MMA gloves right although the wrist cuff can slide down occasionally. That’s welcome extra effort we don’t always get from Mattel. Shamrock has an appropriately muscular torso. 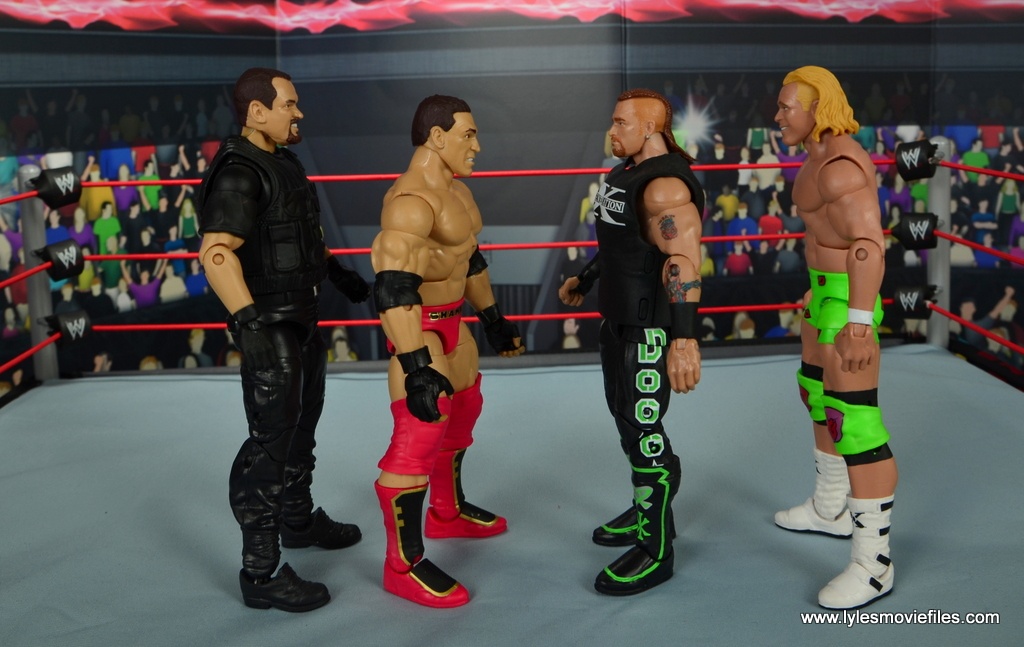 Scale:  Shamrock was 6’1” noticeably shorter than the 6’5” The Rock, 6’6” Big Boss Man and 7’ Kane. The figure is nice and shorter than the others, which I love. This kind of attention to scale is what got me into this line in the first place. 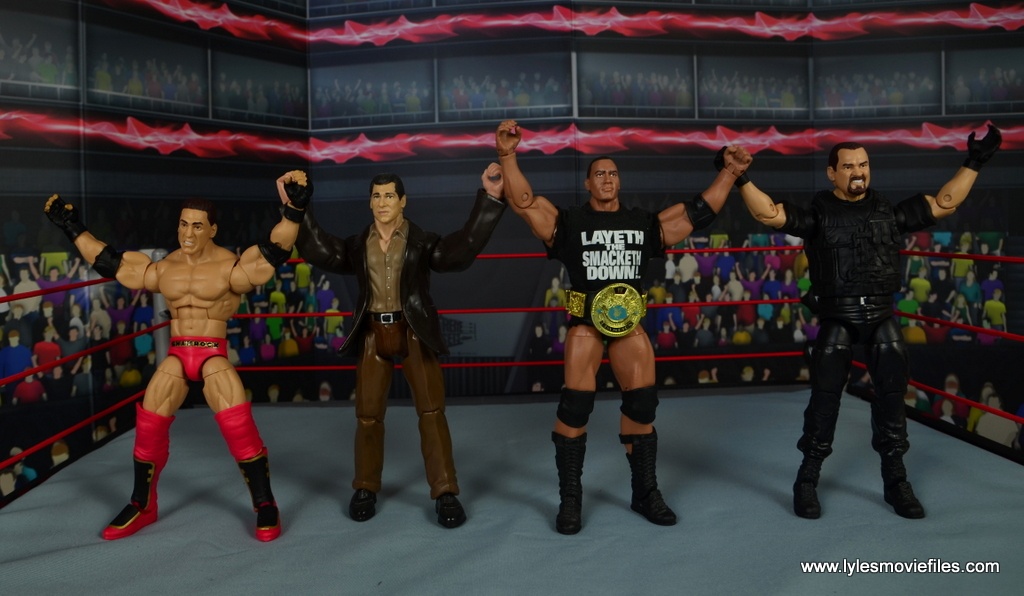 Paint:  This is a matter of preference, but I was a little annoyed Mattel went with old faithful red for Shamrock as opposed to blue. That’s the safest color choice, but blue would have popped better IMO.

A more annoying problem though is the red is not consistent throughout. Only the boots really have the correct shade of red. The tights and kneepads almost have a distracting touch of pink in them making them look a little off. The paint that is here with the lettering and black and gold kick pads is sharp. 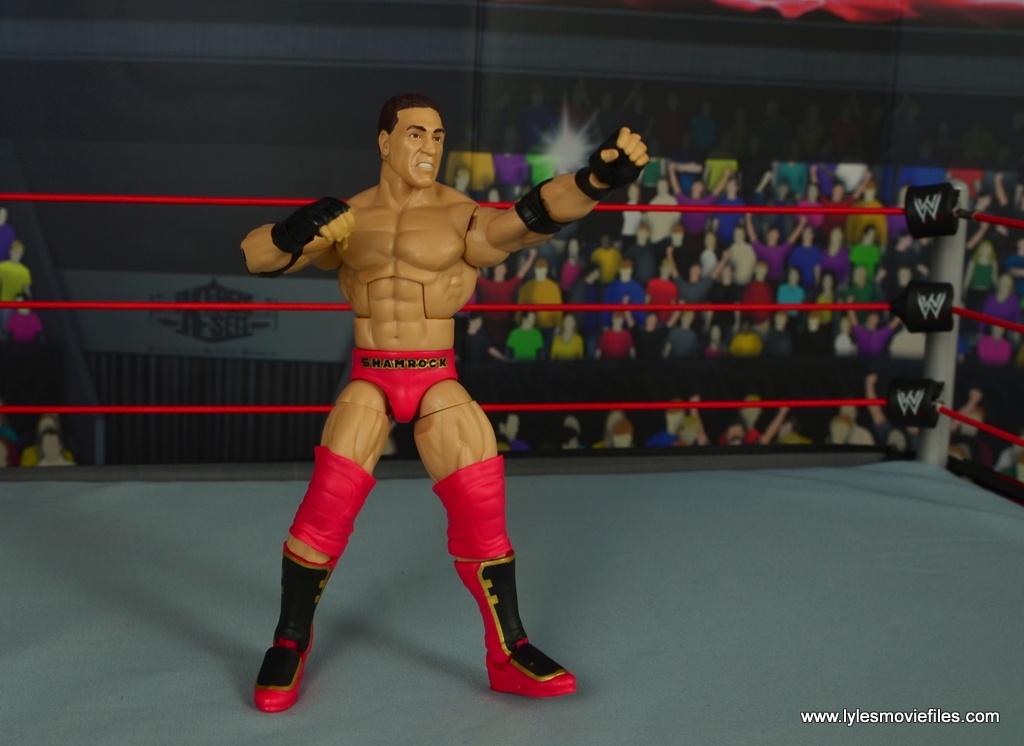 Articulation:  Shamrock was a quick study into wrestling and had a deep arsenal including hurricaranas. Most satisfying of course is being able to nail the ankle lock. Soon we’ll be able to do that Dream Match of Shamrock vs. Kurt Angle. 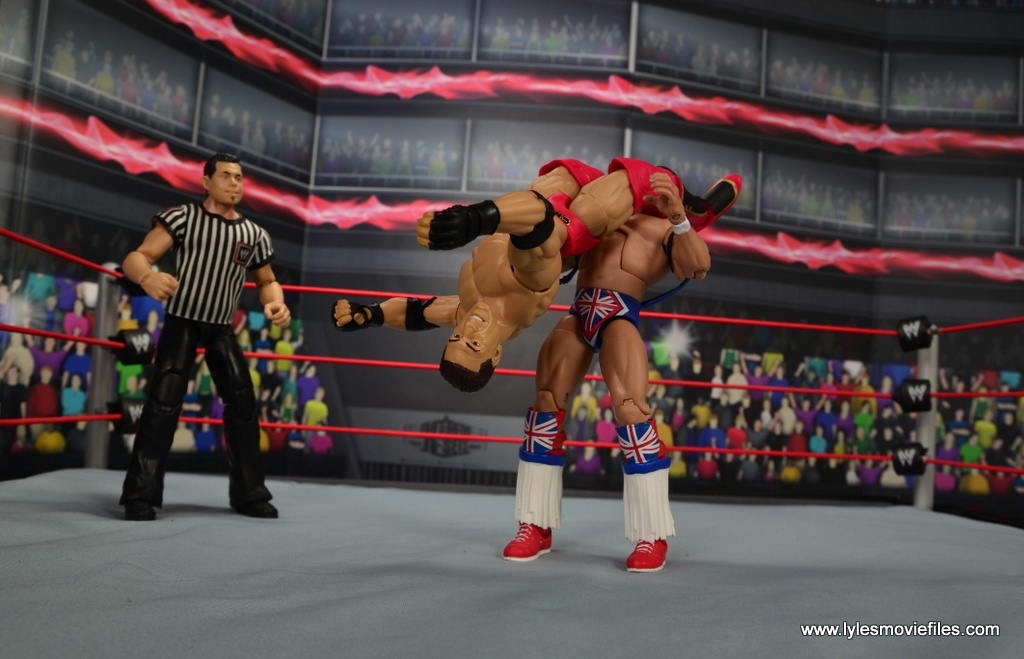 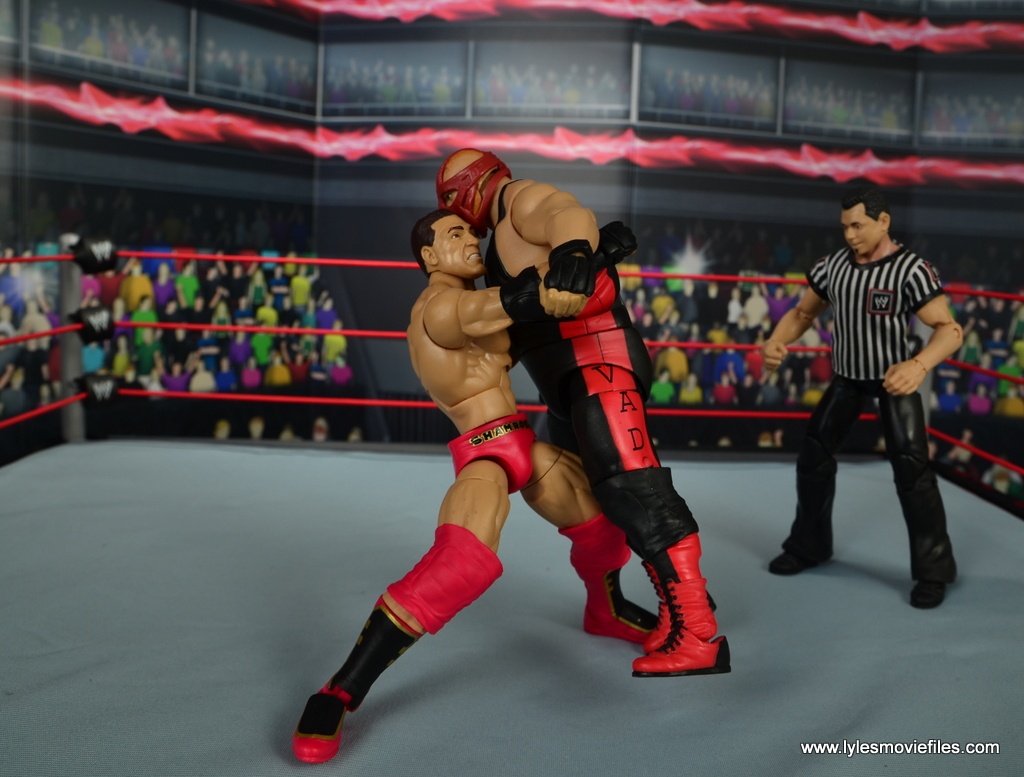 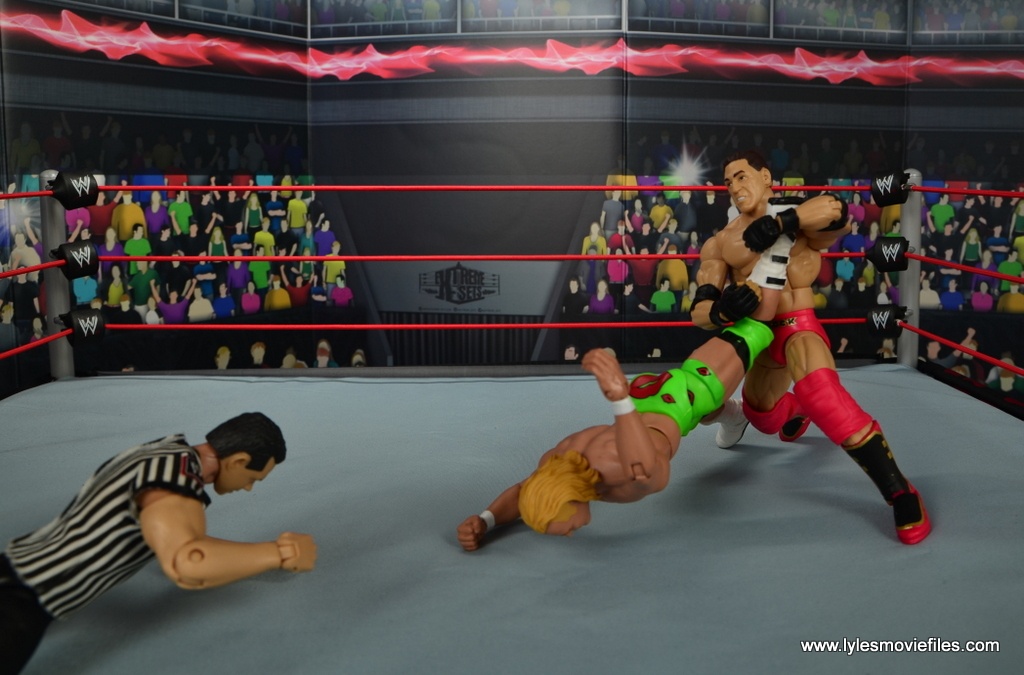 Accessories:  Mattel did right by Shamrock and gave him a cloth robe. It wasn’t that flashy so it made sense to go with cloth. It hangs on his shoulders fine and doesn’t look too oversized.

An Intercontinental title would have been a welcome additional accessory, but he gets a section for the parking low brawl diorama.

If Mattel had to go with red I wish they got the shade right. My preference aside, this is a pretty sweet figure. 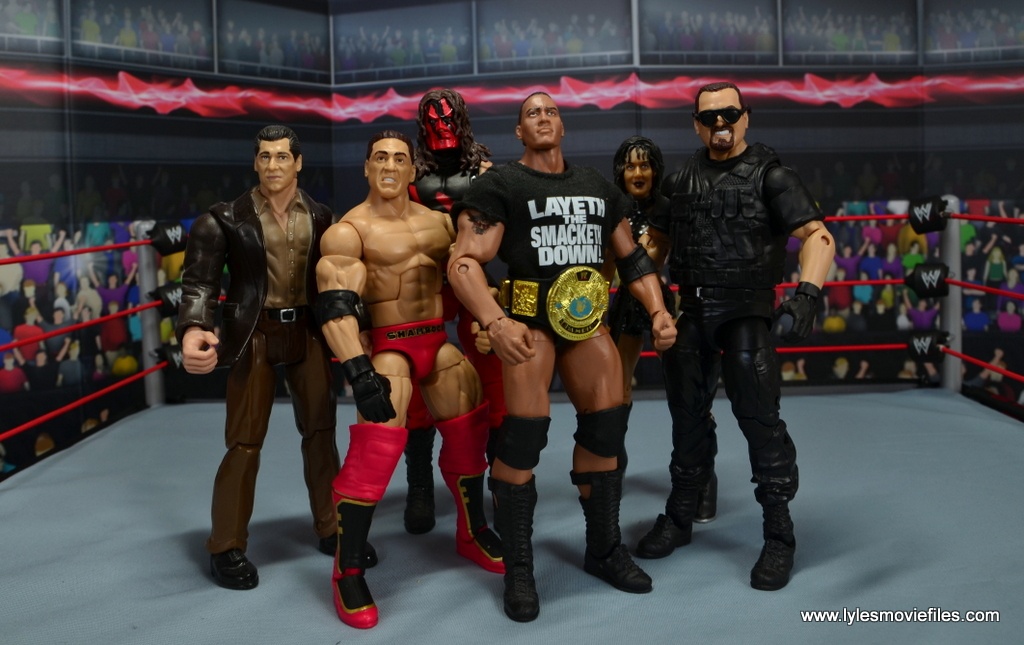 Where to get it?  Amazon.com just got Wave 52 in stock as competitors like Toys R Us, Target and Wal-Mart are fully stocked with Wave 51. You can order him now from Amazon, but don’t forget every purchase probably means a lot for Toys R Us these days.