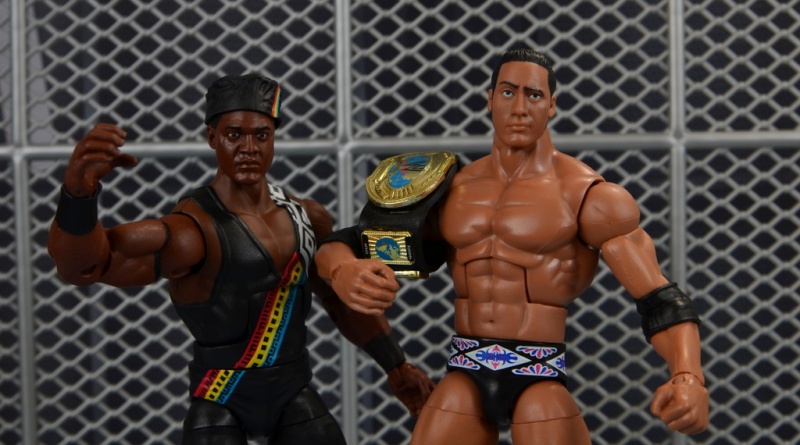 I’ve only been really upset a few times when factions are disbanded. The Dangerous Alliance; Edge, Christian & Angle and The Nation of Domination. The Nation represented a rarity in wrestling — a stable of all African-American wrestlers. And later Owen Hart. That was obviously cool to me and I loved the various personalities in the group.

Mattel has been exploring various ways to deliver Flashback product to collectors and kicked off a two-pack series featuring the two leaders of the Nation — Farooq and The Rock. I’m very hopeful SDCC sees at least Nation versions of Kama and Mark Henry. D-Lo Brown is one of my top wants from the Attitude Era but I know the other two are under Legends contracts with Mattel. For now, let’s see how the leaders turned out.

Packaging:  This is an extended version of the standard Elite packaging right down to the out of place New Generation Era logo. So as not to confuse people with the star of the set, The Rock stands in front of Farooq in the side. 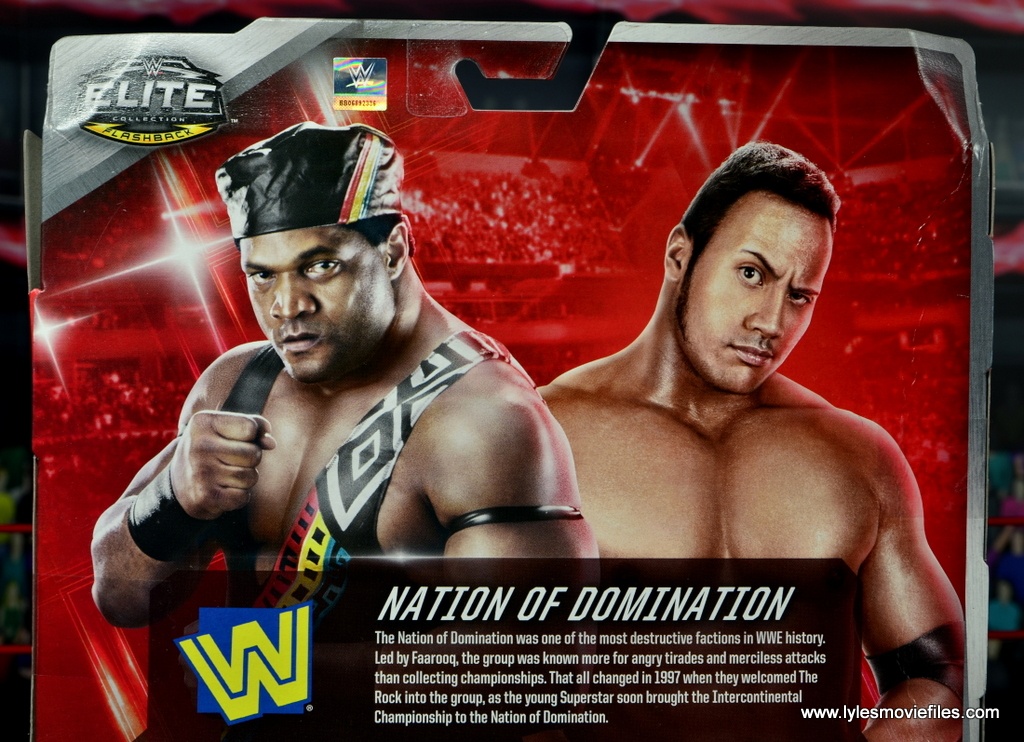 Like most non regular Elite sets, the Nation set has a great bio explaining this pairing. 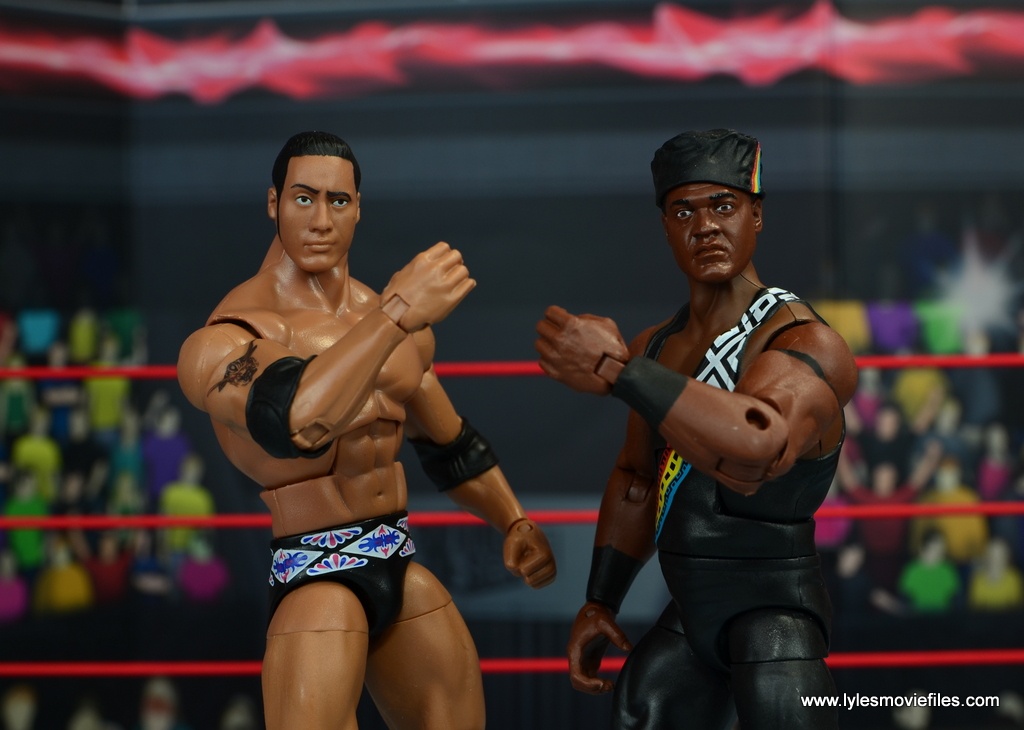 Likeness:  I prefer this younger Rock head sculpt to the 2000-2002 era Rock head sculpt we got with the original Legends figure. It conveys his cocky demeanor perfectly and the People’s Eyebrow embodies all that arrogance with one expression. This is one of my favorite of the Mattel head sculpts.

Mattel is being a bit generous with the ripped torso choice for The Rock, who wasn’t nearly as chiseled during this time period. I appreciate Mattel taking the extra time to get Rock’s open back boots although there’s some weird bunching up on these boots.

Farooq’s head sculpt is an improvement over his APA figure. He has that ‘boy if you don’t get back in line!’ look Farooq constantly had during Rock’s takeover. He’s on a stocky body and looks appropriately beefy.

I can’t believe Mattel didn’t give Farooq or Rock fists though. The raised fist was the Nation’s group gesture and going with open hands was an odd choice when it’s the first thing most fans would want to do with the figures.

Paint:  I’ve come to the conclusion Mattel just can’t get Ron Simmons/Farooq’s skin tone right. The APA figure was far too dark. I wasn’t expecting a correction on this figure, but it seems slightly lighter. That’s still no excuse for completely botching Farooq’s skin tone.

It’s a ridiculous mistake to make twice and really impacts the overall likeness. That issue aside, Farooq’s complex attire was executed really well with the outfit print lined up with no problem.

Rock has a more intricate belt-like pattern along his tights and kneepads. This marked his transition from blue-chipper face celebrating his Samoan heritage to one of the two flagship stars during the Attitude Era. 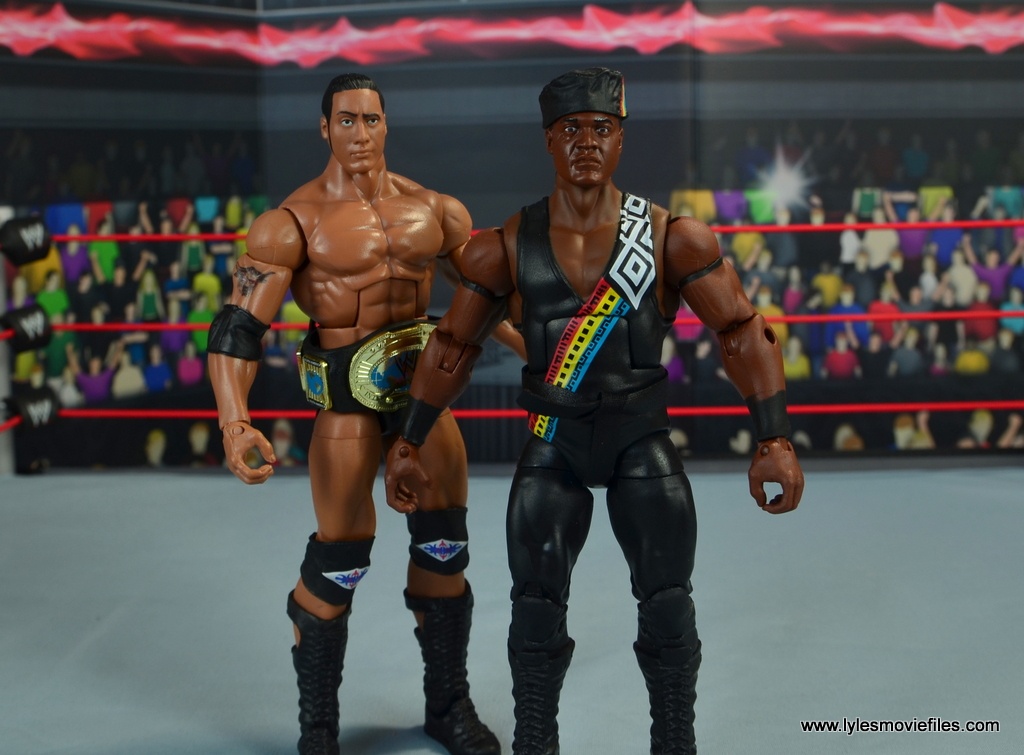 Scale:  Farooq was 6’2” while The Rock was 6’5” They match up to their respective heights pretty well although Farooq might be a smidge too tall. 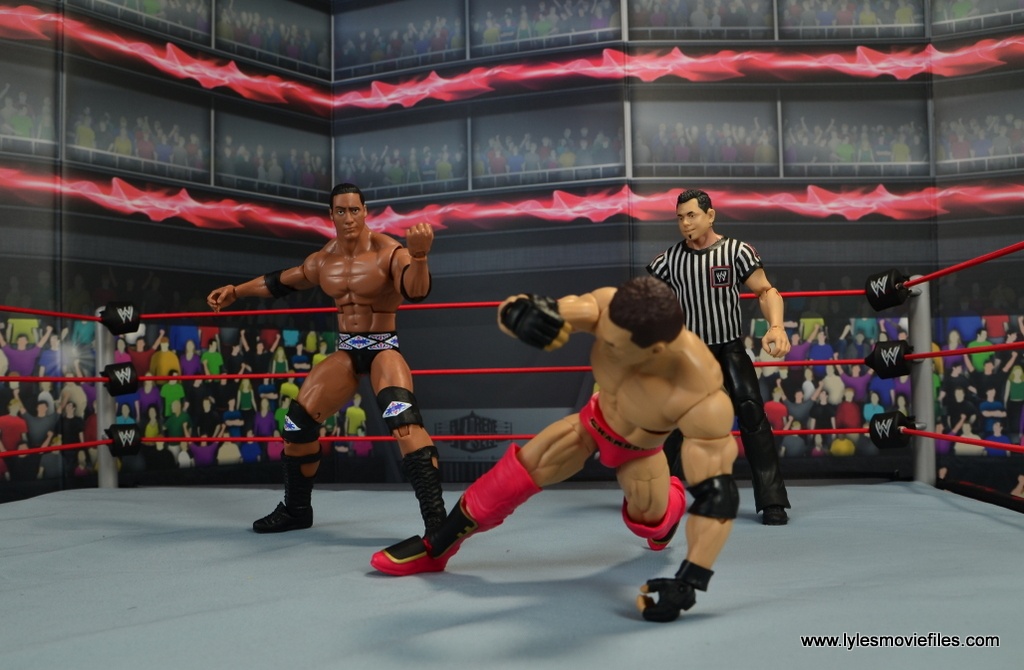 Articulation:  Both figures are Elite so you know what to expect — superior articulation and ease of executing moves. I didn’t have any problems executing any of their moves although posing Farooq with the Dominator and getting Rock in mid-People’s Elbow proved tricky for this review. 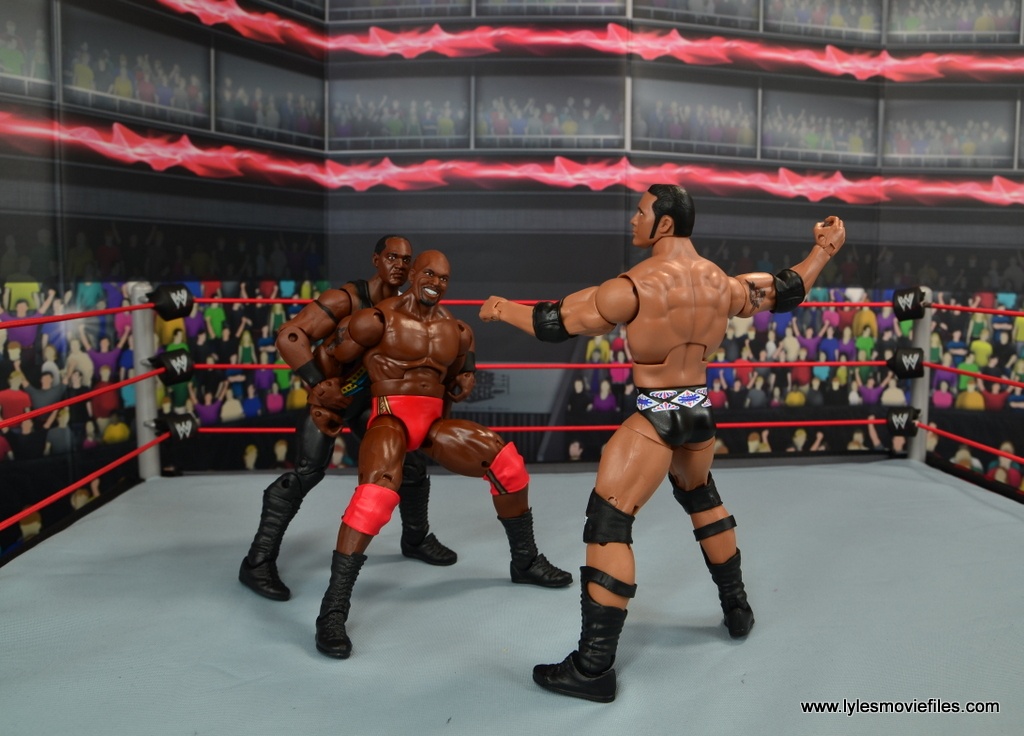 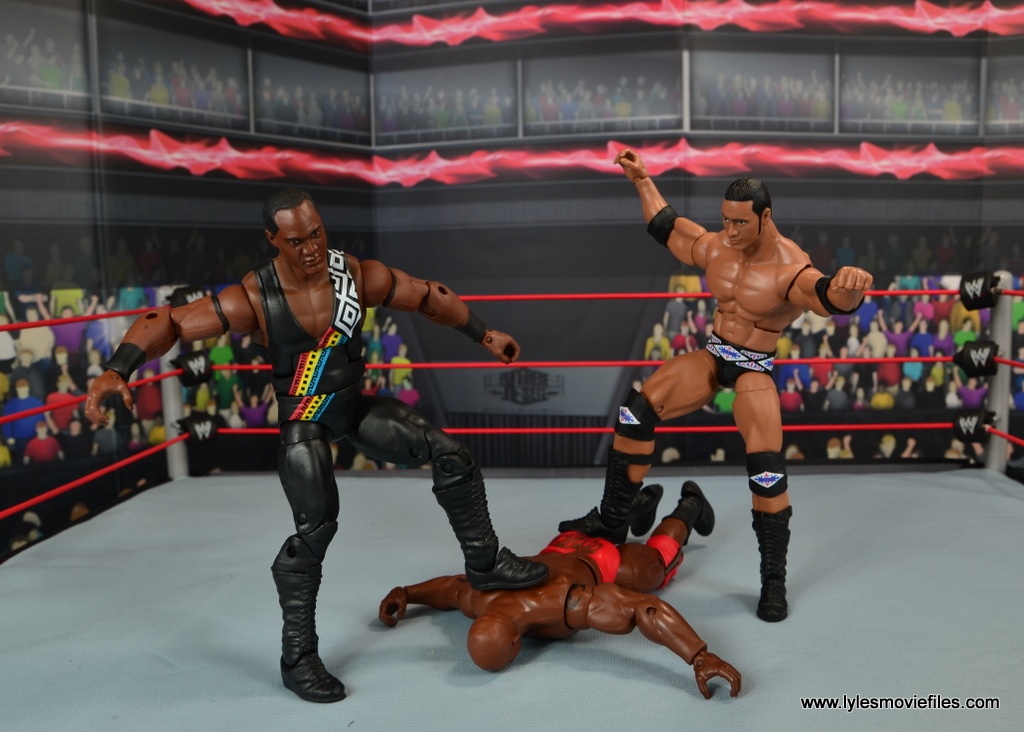 Farooq and Rock have: 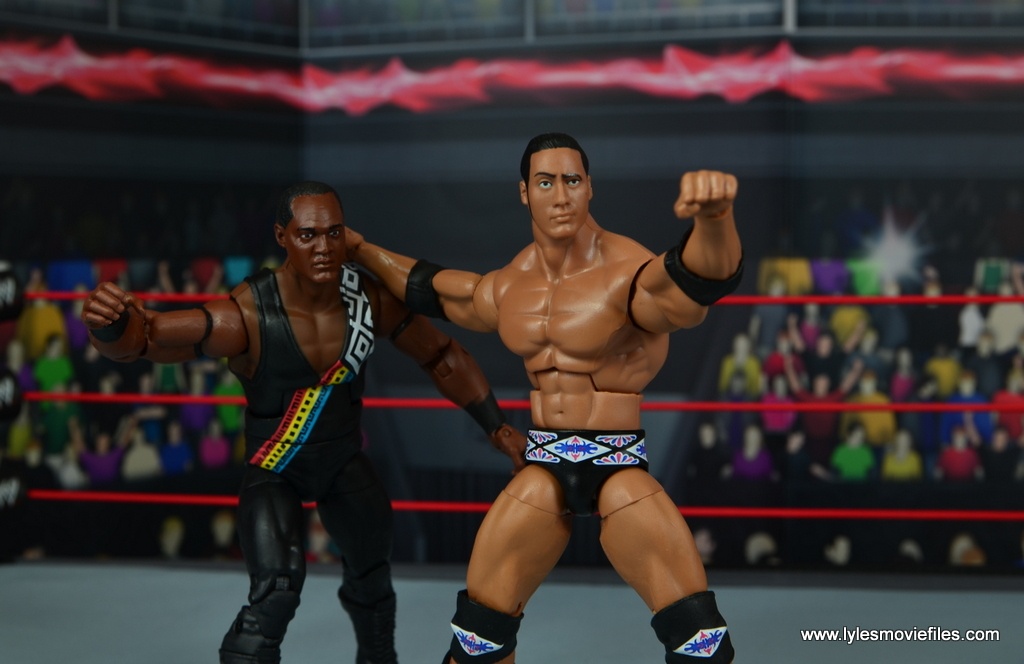 Accessories:  The accessories are a bit slimmer than what we’d typically find in most Elite solo releases.  Ordinarily that would be a slight gyp since there was no savings for customers. Rock comes with the Attitude Era Intercontinental Title. This a title that hasn’t been regularly featured from Mattel so this was a welcome accessory. 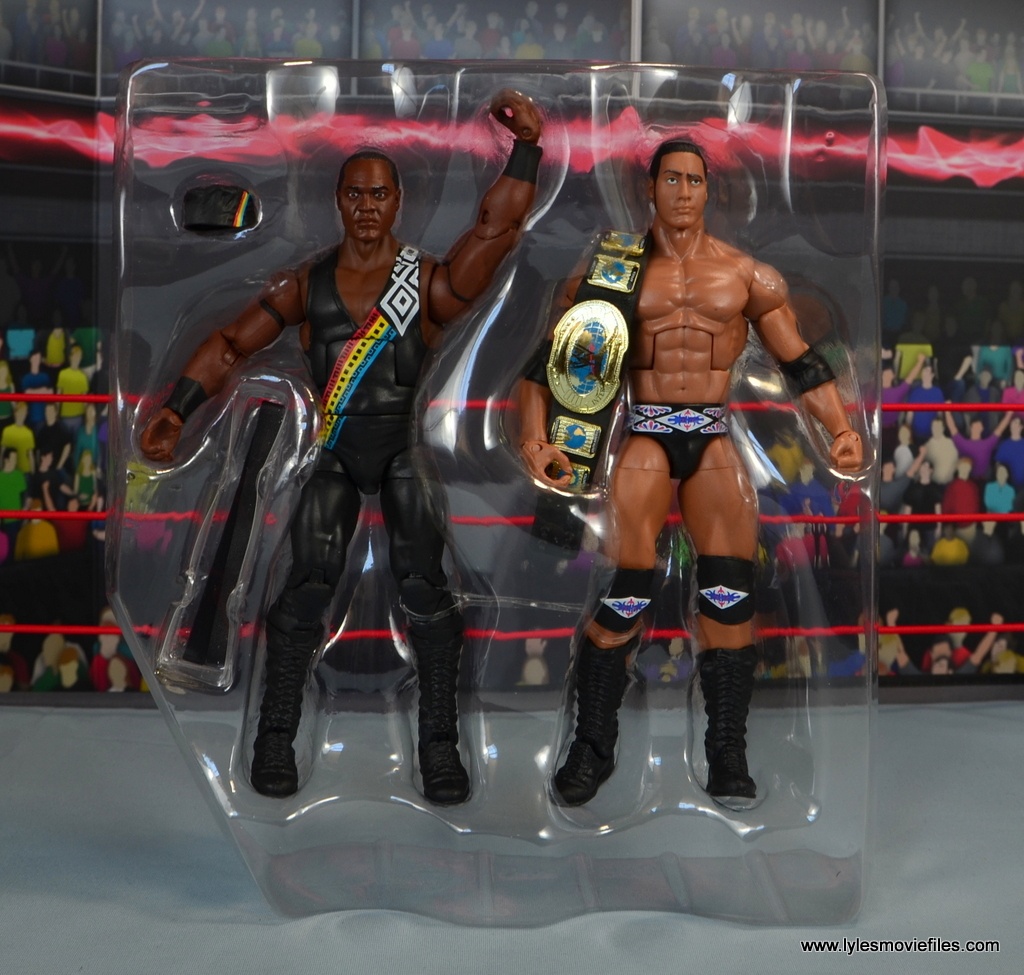 Farooq comes with his hat and the belt he’d use to whip anyone who crossed him. As this is likely Farooq’s only Nation figure I would have loved if he came packed with his leather jacket from his early Nation leader days, but his main accessories are covered.

Where to get it?  The set was exclusive to K-Mart and some online retailers, but really Amazon is the way to go with that current killer price.

If Mattel hadn’t completely screwed up Farooq’s skin tone this set would be pretty much perfect. This is the kind of mistake they shouldn’t be making at this point with the line. 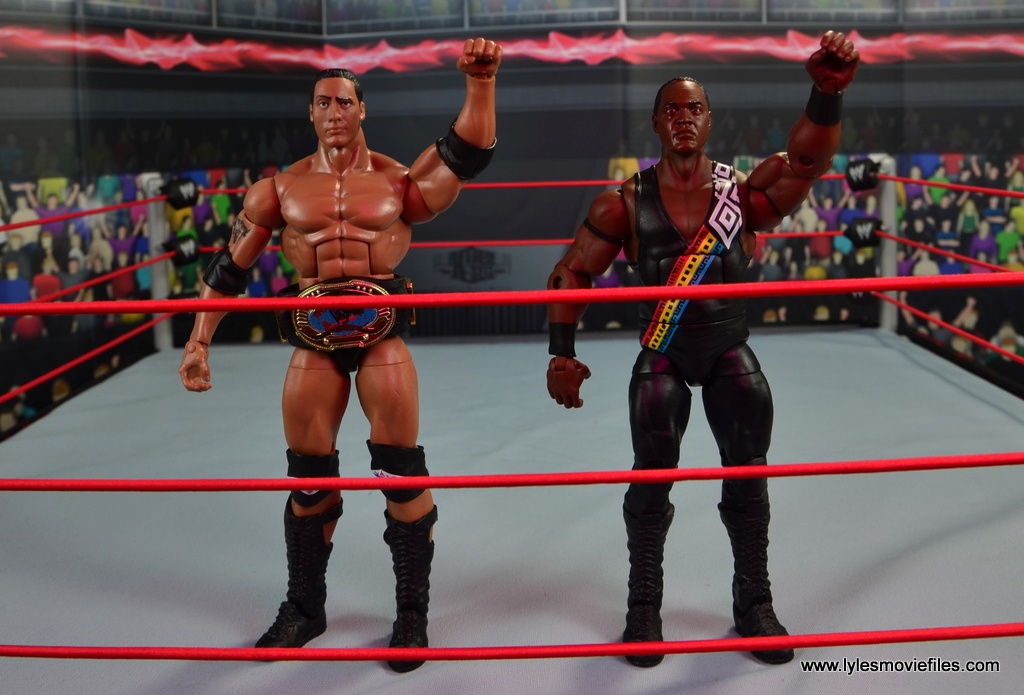 Farooq was a pretty significant player in the early Attitude Era battling most of the top stars. Obviously he becomes more important if Mattel releases a Kama, Mark Henry, D-Lo Brown or Nation versions of Crush and Savio Vega. At the current price now you’re pretty much getting a figure for free.