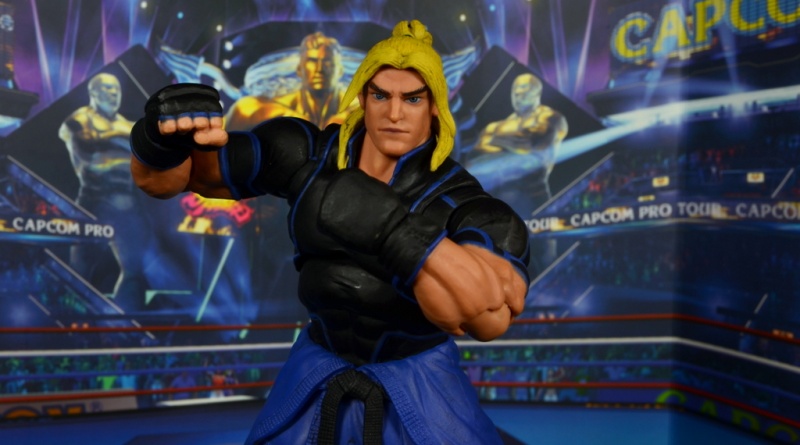 I’m a creature of habit. Whenever I play Street Fighter, I start off with Ryu and win or lose, I’m using Ken for my second round. My SOTA Collectibles Street Fighter line is one of the few lines I’d mostly consider complete. That’s made me very reluctant to get into any other companies making Street Fighter figures. But with Storm Collectibles getting practically every fighting game license, I figured it was time for an update.

And Storm Collectibles’ Street Fighter V based figures were different enough I didn’t feel like I was buying the same figure over again. Naturally, I had to get Ry first and Ken second. I got the blue variant Ryu and was thrilled when Storm Collectibles announced a blue variant for Ken. Even better as a Toys R Us exclusive for New York Comic Con. My figured arrived over the weekend and I couldn’t wait to break him out and see how far down this Storm Collectibles rabbit hole I’ll be going.

Packaging:  The packaging is really eye catching. I remember seeing a Ryu in store and stopping to check it out because of the appealing nature of the packaging. It’s wide and colorful. 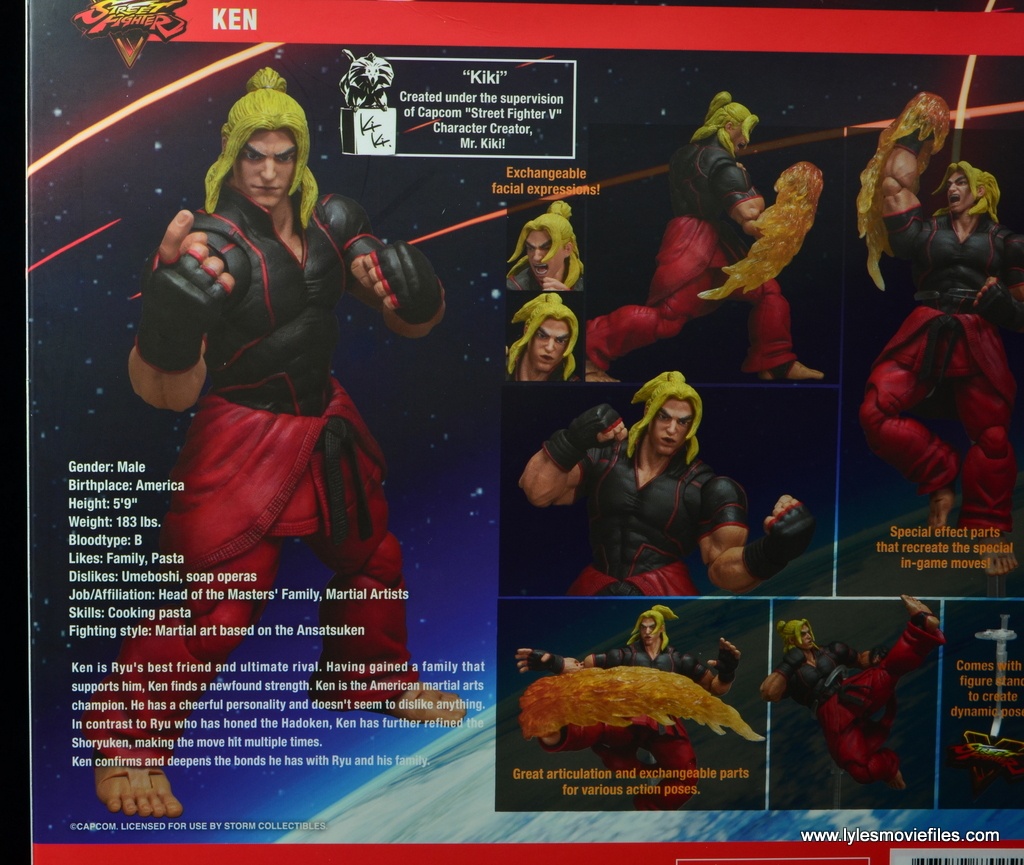 The various plastic portions make it harder to actually see the figure inside to get a glimpse of important details like paint flaws, but all the accessories are visible. There’s a terrific bio that is far more comprehensive than the norm. That always earns extra credit for me. 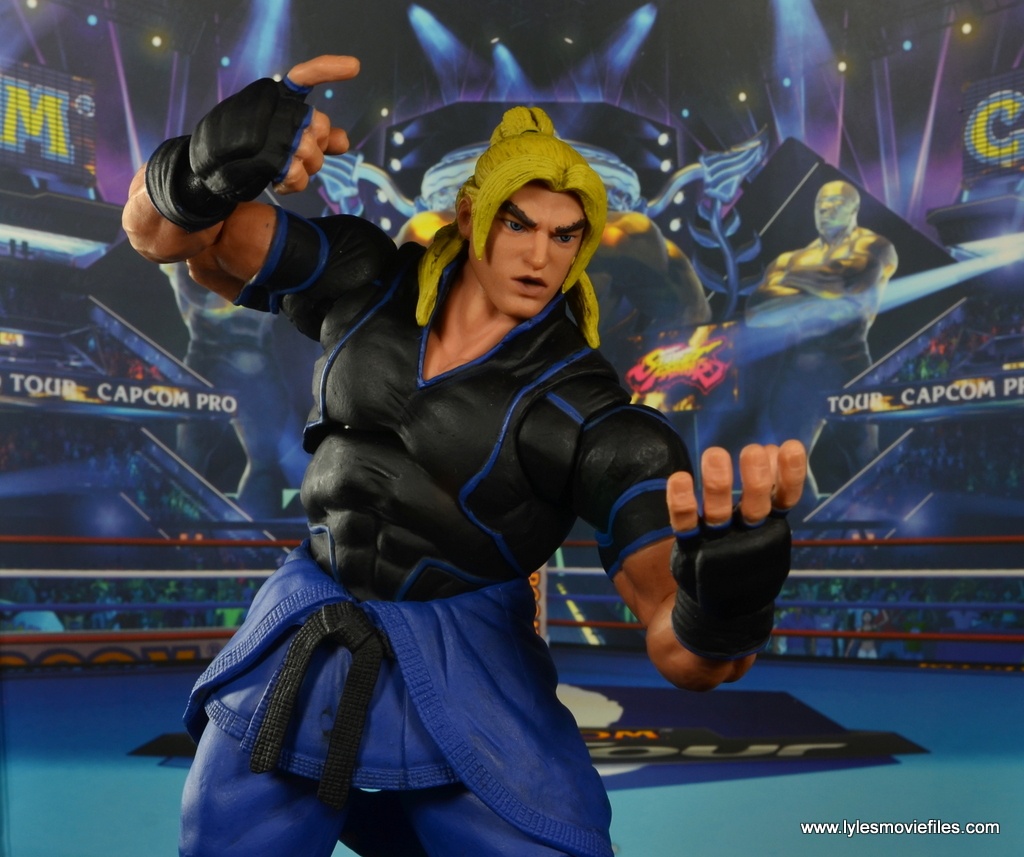 Likeness: Capcom went with bulkier, broader designs for Street Fighter V. SC captures that style nicely and it really works well for the figures as it allows for better detail. Having the top portion of his gi down so he could fight with just his Under Armor-esque shirt seemed like a Ken kinda thing to do. 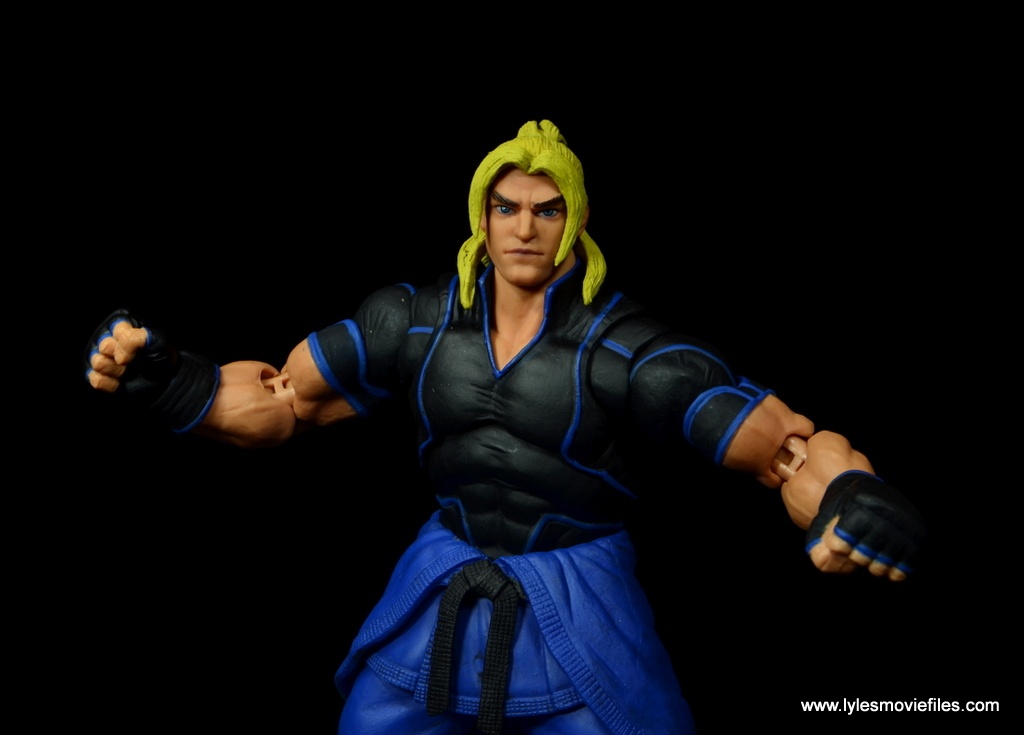 I love the base expression as it captures Ken in his mature, but still slightly cocky demeanor.

Paint:  If you have the regular version there’s no big difference here. Ken is the same figure just with the vibrant blue paint scheme. 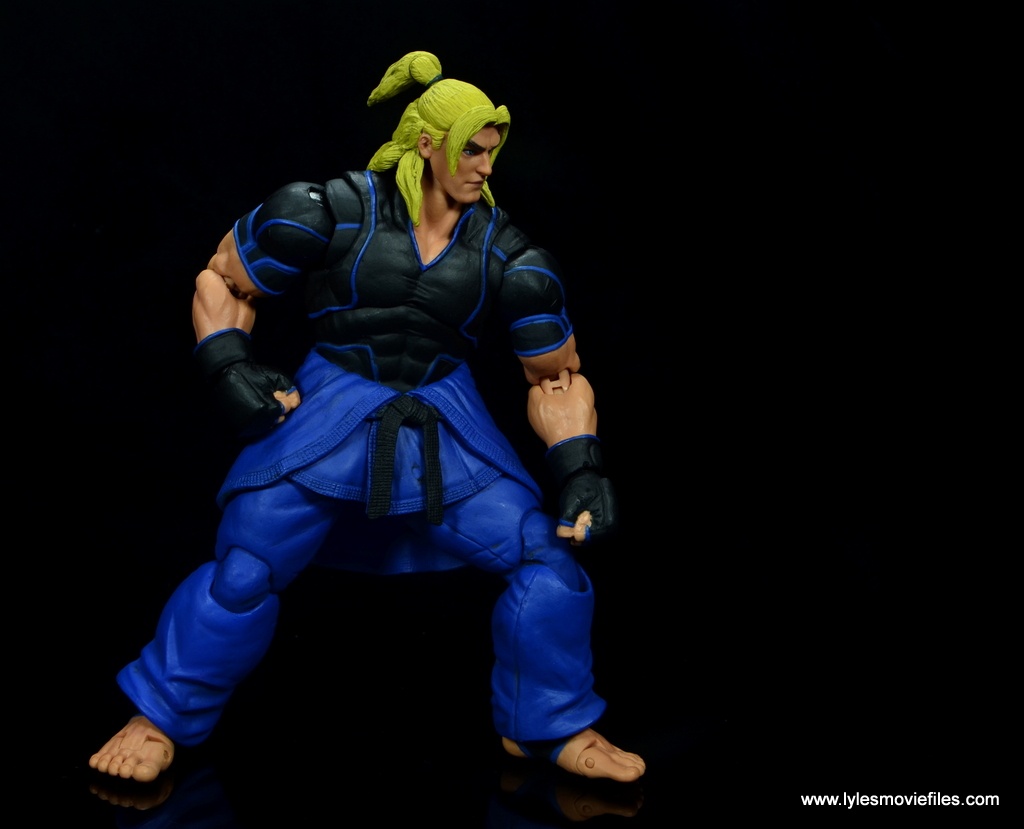 Articulation: The key for Street Fighter figures is major articulation. You want them to be able to simulate all of their moves. Ken has some of the more dynamic moves. The makeshift gi doesn’t restrict movement so Storm C didn’t sacrifice movement for aesthetic.

Accessories:  Ken comes with two additional face plates. One looking like he’s recovering after taking a punch to the gut and the other like he’s preparing for a Dragon Punch. Adding a bit more versatility, there’s two other front hair pieces with windswept and wind blown. That’s a crazy level of detail. Ken also has three additional sets of hands.

Since Ken is the more fiery of the two, he trades out his fireball for two fire attachments. One for his foot for starting and in full flaming hurricane kick and the other for his flaming Dragon Punch. Ken also gets a flaming fireball. That takes some patience to position correctly with the gripping hands. Once you get the sweet spot, it will stay in place without any need to worry about it falling off. 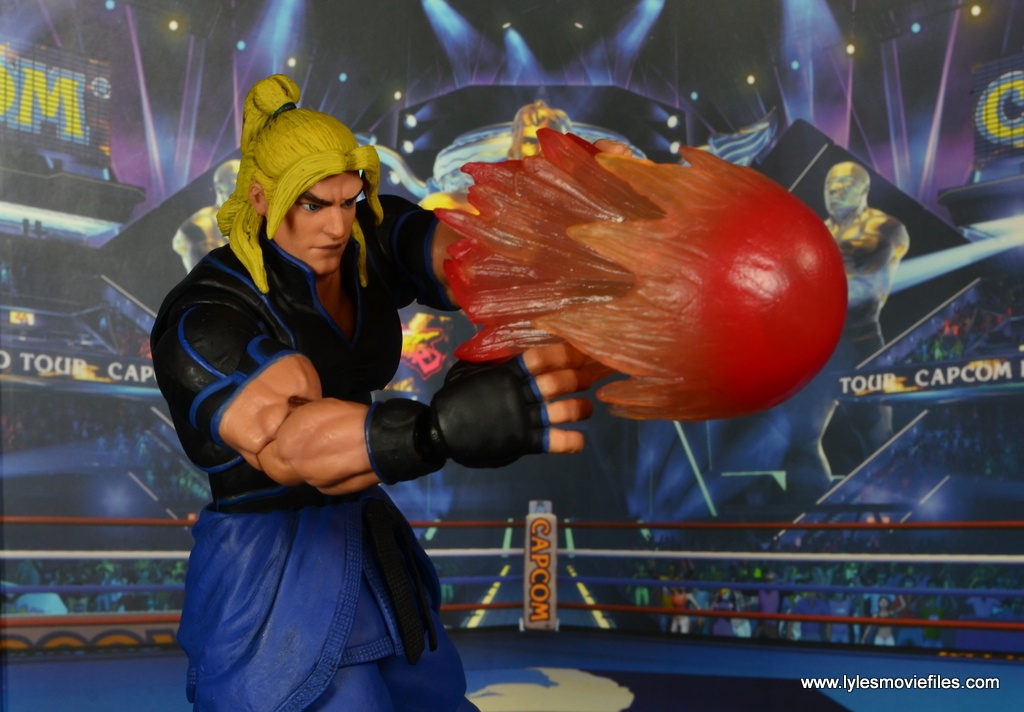 To help accommodate some of the more dynamic poses, Storm included a stand to attach to the Street Fighter V base.

Finally, and maybe more importantly for an instant battle scene, Ken comes with a backdrop from the game. It’s not massive or to scale based off this setting so Ken looks taller than he should against the objects in it, but it’s a helpful and useful accessory. 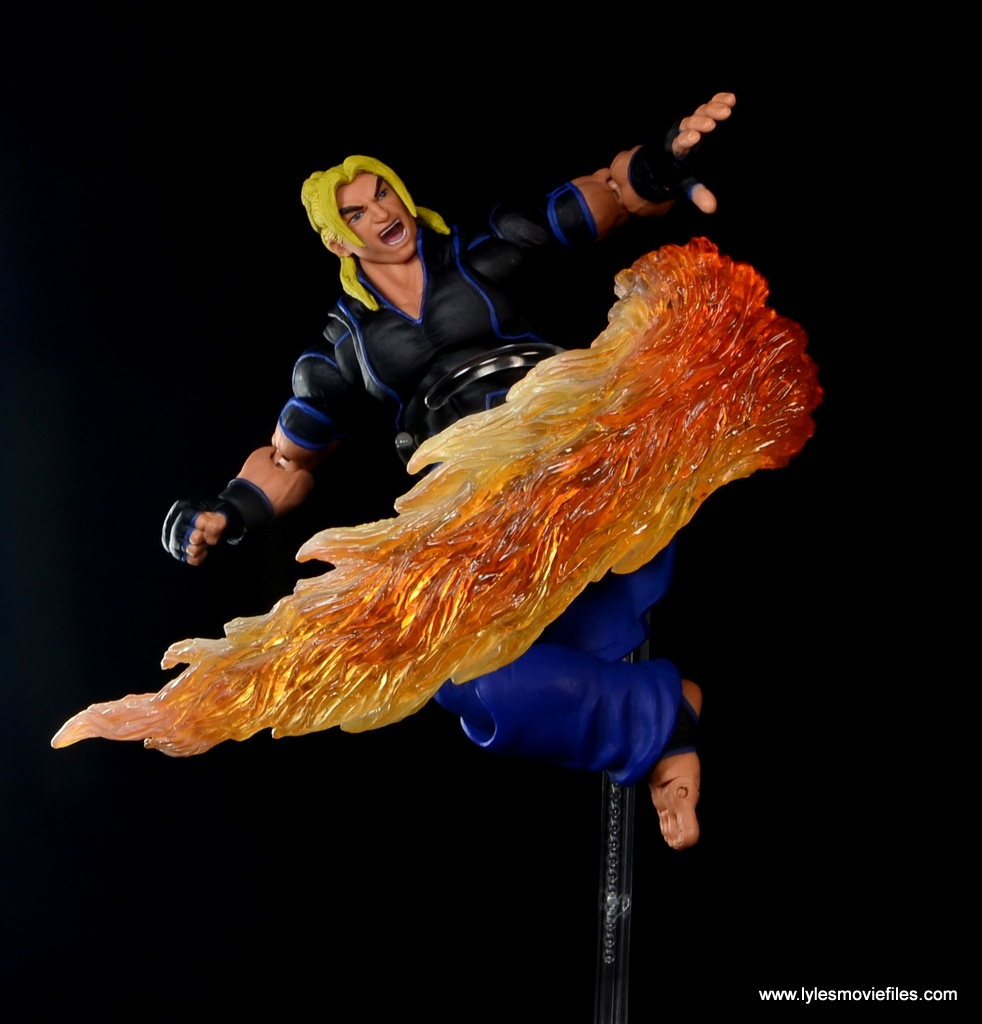 Worth it?  At $60, Ken runs three times as much as the typical 6” figure without extras like a Build-A-Figure piece. The accessories and smaller distribution run balances out some of those costs though. Ideally, he’d be about $10 cheaper, but I don’t feel ripped off.

Where to get it?  This special blue edition is a Toys R Us exclusive. Sure you could pay more on the secondary market or on Amazon.com, but there’s no need while it’s still in stock at Toysrus.com. Prefer the red attire? Grab it from Entertainment Earth or Amazon.