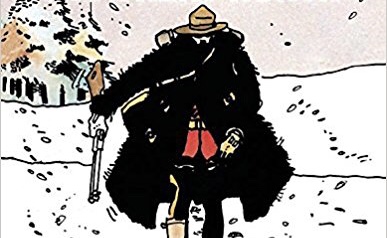 IDW Publishing is releasing Hugo Pratt’s classic, The Man From the Great North, which will feature for the first time an English translation.

Set in the snowy wastelands of Canada around 1912, this provocative story deals with complex moral choices. Jesuit Joe, the protagonist, is of French-Canadian and Mohawk descent and is embarked on an obsessive religious search for the Absolute. His actions reflect a disturbed personality with an unorthodox ethical code. He kills with terrible ease and reveals an unmatched cruelty and ferocity, yet when his mood suddenly shifts, he is capable of unexpected acts of kindness and compassion.

He wears the red serge jacket of the Canadian Mounties that he found in a hut—which gives rise to a series of misunderstandings when he is mistaken for a member of the Canadian Mounted Police—and is tracked by his nemesis, Sergeant Fox, whose mission is to capture Jesuit Joe and bring him to justice.

In addition to the 1980 main story, the collection features additional scenes Pratt created as storyboards for a live-action film adaptation. This sounds like it would make for a terrific premise for a film. The collection also contains an unfinished second story that follows the events from the first adventure.

You can get the collection now at specialty comics stores, including Third Eye Comics, and everywhere else on Nov. 21. Retail price for the 112 page collection is $24.99.

Want a tease? Check out this eight-page preview.