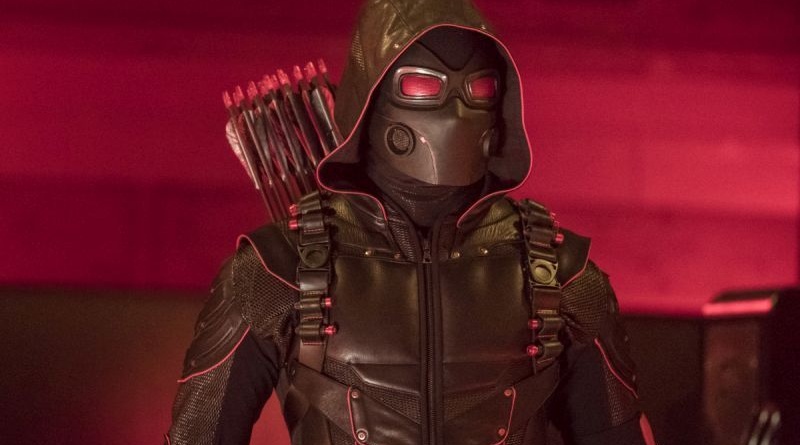 By Part 2 (or really Chapter 1) of the Invasion crossover, there was more than enough reason to be excited for the first major team-up of the CW shows. Crisis on Earth-X Part 2 advanced the main point and explained why the Nazis have come to Earth-1, but the same problems that dinged the first chapter affected this installment too.

Once again, the first part was really strong as the captive Prometheus revealed himself as Tommy. And that’s why it pays not to actively seek out spoilers. I had just enough of a break between the first episode to think how cool it would be if Tommy was Prometheus. Too bad he killed himself after threatening Oliver his crew would crush Earth-1. That seemed like a real waste of two of the more popular Arrow characters. 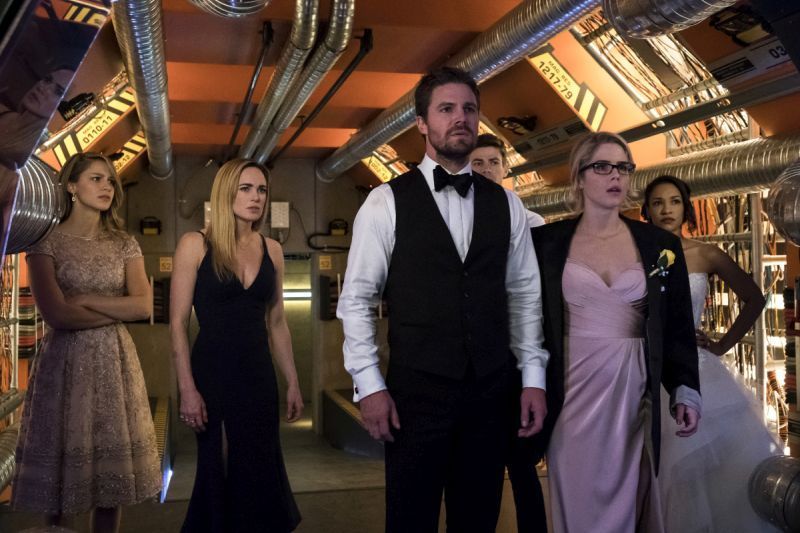 Good thing all that time with Oliver sorting through his feelings about Tommy doppelganger were better used with Oliver pleading with Felicity to get married. That’s such a CW hero move to pester his girlfriend about getting married. It’s moments like this that make some of the fan base hate Felicity as she turns Oliver into this emotional puddle while she’s blowing him off.

And there’s more Sara/Alex awkwardness. It seems like these scenes with Sara were the only reason Alex got to tag along this time. It’s such an incredible waste of one of Supergirl’s best characters. Now we’ve got to devote some time to Alex second guessing breaking things off with Maggie. Alex, make up your mind!

On one hand, I appreciate the crossover dutifully maintaining the current events in the other shows, but it seems like stopping the Nazis should be the only priority. Not second chance proposals, one-night stand drama or super power swapping. Let’s just punch Nazis, gang!

Appropriately, HR knew about Earth-X. That makes sense seeing as how he’s a Multiverse aficionado. I kinda wish Wells mentioned a quick reference about the Freedom Fighters to tease that they do exist in the Arrowverse — even if The Ray is the only one we’ll see here. It’s just too bad Kara and Alex don’t know a telepath who can help track down the Nazis. I really wish these crossovers would stop going out of the way to keep Martian Manhunter away from the fun. 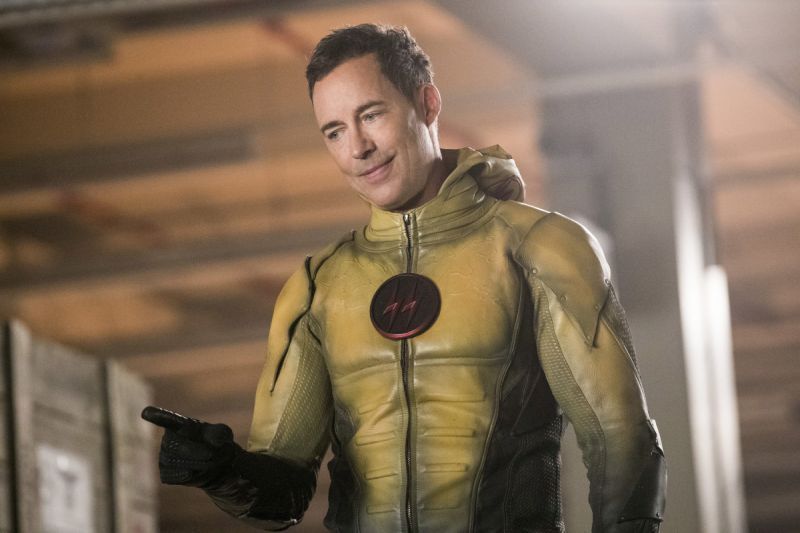 Jax is reconsidering breaking up the Firestorm team. I’d be happy with both of them leaving Legends to open up the possibility of them randomly guest appearing on The Flash. Legends can have Wally (and his hair) and we’ll call it an even trade.

Part 2 picked up when it focused on the action. There was a fun Crime Syndicate moment when Overgirl, Red Green Arrow and Reverse Flash. Hopefully there’s some reason why Thawne reverted to his Wells face and teamed with the Nazis besides he was bored. And shouldn’t the Legends have told Barry that Thawne was still around? You know, back when he dropped off their wedding invitation?

The effects crew seemed taxed with the Big Three vs The Evil Three fight, particularly whenever Supergirl or Overgirl got knocked back. Arrow having a Kryptonite arrow was such a Batman move. Not that it was especially effective. Maybe he needs Kryptonite gas and a spear, too? 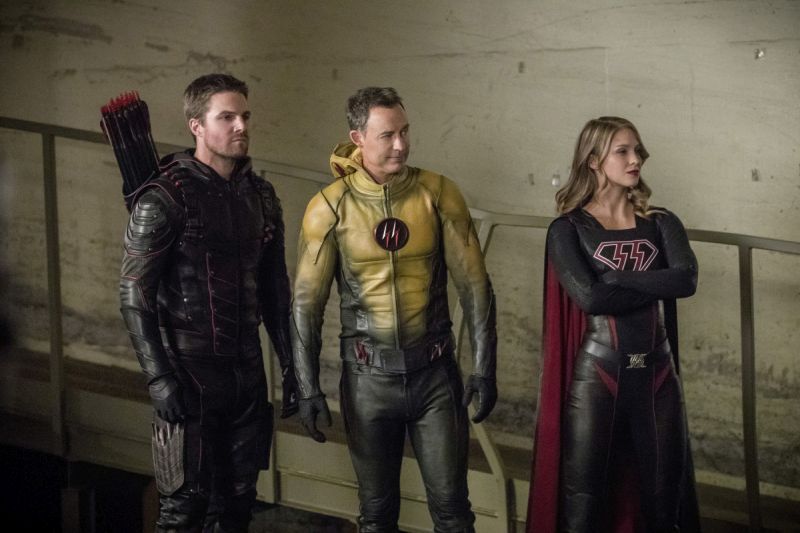 After the first draw, the rematch proved just as visually fun. The Flash always gets shortchanged in these fights as he’s just a red lightning blur, but it makes for a cool backdrop to the others battling. Sara going toe to toe with Overgirl even for a second was pure ridiculous.

X-Arrow once again reminded Team Flash putting locks on the STAR Labs doors is not just smart, but a way to not get killed. Just a thought. I loved how Team Arrow’s flashy entrance just led to an impressive beat down by X-Arrow. Killer Frost and Mick seemed like they would have put up a better fight though. Somehow Felicity and Iris managed to evade the Nazi soldiers at STAR Labs.

To further stack the odds, the Earth-X crew has Metallo waiting as backup. This was a fun villain choice. I’m curious to see what other X-villains we’ll see. I wasn’t as fond of Overgirl slowly dying and the possible conflict of interest for X-Arrow. I’m not the New York Times so I have little use for Nazi sympathizing. The writers don’t need to humanize them at all. 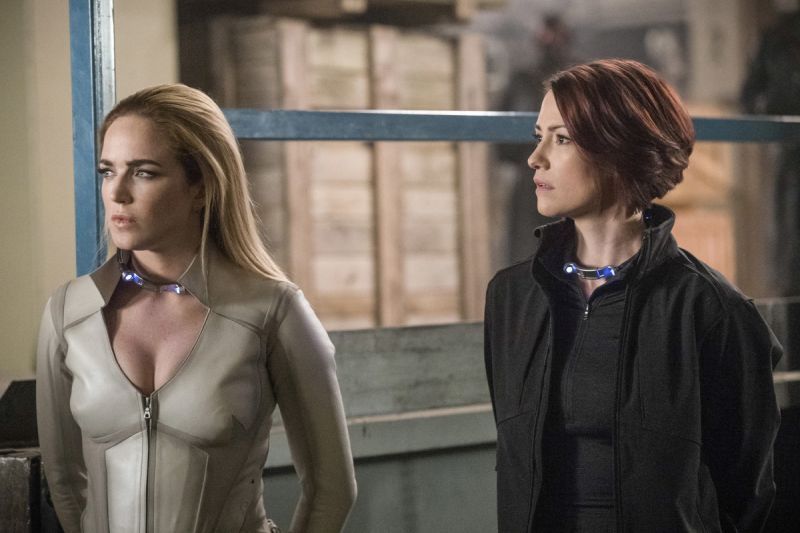 This provided some rationale for the attack, but why in the world wouldn’t the X-League wait until Kara was back on her Earth? For all of X-Arrow’s strategy, there’s way less heroes to worry about there unless they’re worried about Superman? They shouldn’t though since Supergirl is stronger than him anyway. Kara’s heart is the key and to help convince her to go along with the transplant, everyone’s coming to Earth-X!

Crisis on Earth-X Part 2 had some nagging issues that held it back. With the gang on Earth-X, I’m hopeful some of those problems will be resolved. Right now this crossover is lacking that sense of urgency and creativity that made Invasion work so well.