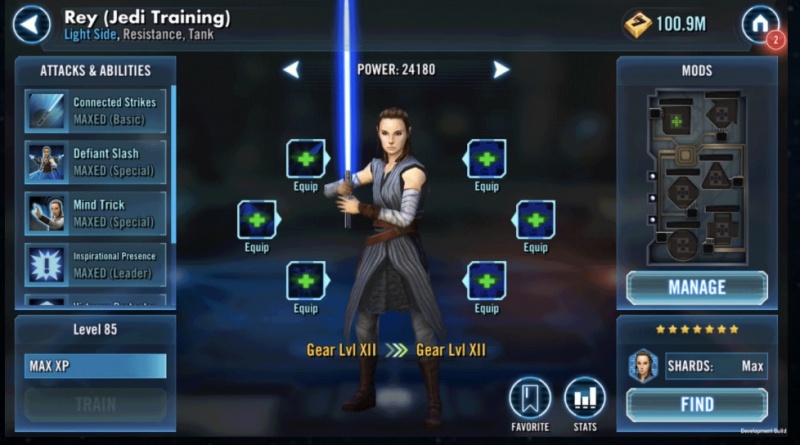 By now I’m sure most people have seen Episode 8: The Last Jedi and chosen a side. Not like light or dark side, but if they loved it or hated it. One thing Star Wars fans can probably agree on is Star Wars: Galaxy of Heroes is a fun mobile game. The latest update, Rey’s Hero’s Journey, further explores the adventures of the Sequel Trilogy’s main character.

Jump into the most successful Star Wars mobile game, Star Wars: Galaxy of Heroes and battle for control of the galaxy from the palm of your hand, now featuring Rey’s Hero’s Journey event based on the movie.

The limited event, Rey’s Hero’s Journey, introduces The Last Jedi incarnation of Rey (Jedi Training), where she assumes the role of a potent protector for the Resistance faction. While the faction has been known to feature strong attackers and support characters, Rey will be the first who takes the role of keeping others healthy by granting allies Foresight to evade attacks and keeping allies cleansed of debuffs.

But keeping the Resistance healthy is only part of Rey’s unique abilities in-game. Rey (Jedi Training) will wreak havoc on enemies by inflicting multiple debuffs and assisting in heavy target damage. The Last Jedi incarnation of Rey, also comes with a Leadership ability, offering players an alternative to Finn’s Leadership ability for more varied gameplay options.

As always with Galaxy of Heroes timed events, there’s a limited window to maximize Rey. EA says players will need to have seven star versions of these characters to fully complete Rey’s Hero’s Journey event:

Completing the event will unlock Jedi Training Rey at seven stars for players.