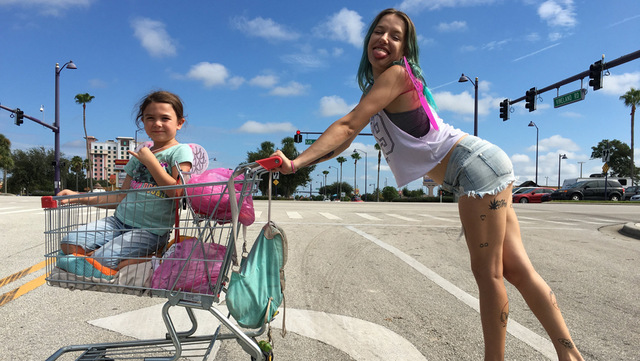 The Florida Project is one of the year’s most riveting, beautifully shot and well-acted films. It’s a heartfelt and touching look at the lives of the downtrodden even if it’s not always the most pleasant viewing experience.

The title is literal as it’s about the projects in Florida. Director/co-writer Sean Baker and co-writer Chris Bergoch show the other side of life in Florida on the outskirts of Disney’s Magic Kingdom. There’s no magic castles, immaculate backdrops and characters ready to break into song every half hour.

Moonee (a fantastic Brooklynn Prince) is a six-year-old going on 26. She’s rebellious, mouthy and chock full of imaginative bad ideas like spitting on cars or playing in abandoned houses.

It takes five minutes to realize Moonee’s behavior is a direct reflection on the loosely defined parenting of her mother Halley (Bria Vinaite). Content to chill at their hotel apartment, Halley lacks ambition despite multiple scenes showcasing her ingenuity in making money from selling perfume to hawking Disney World tickets. Halley relies on her best friend and fellow hotel dweller Ashley (Mela Murder) for food from her waffle house gig while watching TV constantly.

Moonee’s poverty is a state of mind as her imagination takes her to safaris and appreciating little things like sharing an ice cream cone three ways.

Watching all the mayhem unfold is complex manager Bobby (Willem Dafoe, John Wick). Bobby has long given up on trying to encourage Halley to be a better parent and instead tries to keep an eye and patient attitude as Moonee and her friends (Valeria Cotto, Christopher Rivera and Aiden Malik) use the complex as their playground. 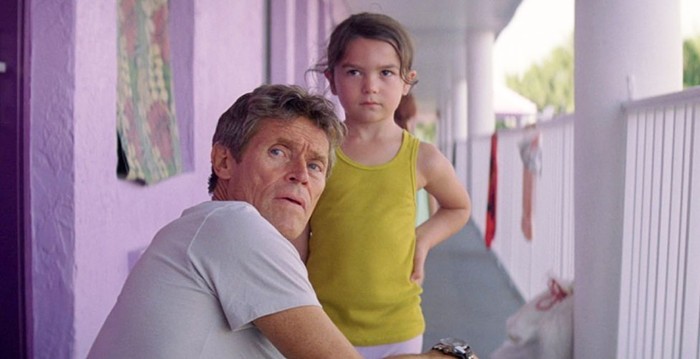 Dafoe easily gives one of his best performances. It’s a thoughtful performance that constantly left me wondering what he’s thinking as he furrows his brow and grimaces. Dafoe gets a couple of award highlight reel scenes including one when he runs off a suspected pedophile in a great moment.

Florida Project is stacked with terrific and authentic performances.  Most of the cast, including Vinaite, Murder, Rivera and Cotto make their feature film debuts here and already carry themselves like veteran actors. I’m very intrigued to see what Vinaite will do next to see if she has another great performance in her.

This is the depressed reality of a post Great Recession world outside of the most magical place on Earth. The cinematography is beautiful with frequently overcast weather accentuating the garish buildings in bright orange and purple. Baker frames the shots to make the gaudy hotels and businesses larger than life just like an amusement park for Moonee and her pals. Baker uses long tracking shots to convey that for Moonee this isn’t a small world after all.

The biggest challenge is determining the point of the film. At just under two hours, Florida Project feels longer because the point was made within the first 40 minutes. There’s no end game or lofty goal beyond scrounging up enough money to pay next week’s rent. It’s clear this isn’t going to be a magical happy ending for anyone. It’s tough to root for Halley when she’s such a terrible person and slowly influencing her daughter to lead the same kind of corrosive lifestyle.

Baker and Bergoch suggest Halley merits  sympathy for her plight and the thought of her losing Moonee. They make a more effective case as to why Halley is an unfit parent desperately in need of a wake-up call. And for all his bluster, Bobby continually enables her as if to make up for mistakes with his son (Caleb Jones). It’s an interesting dynamic I wish were explored more. 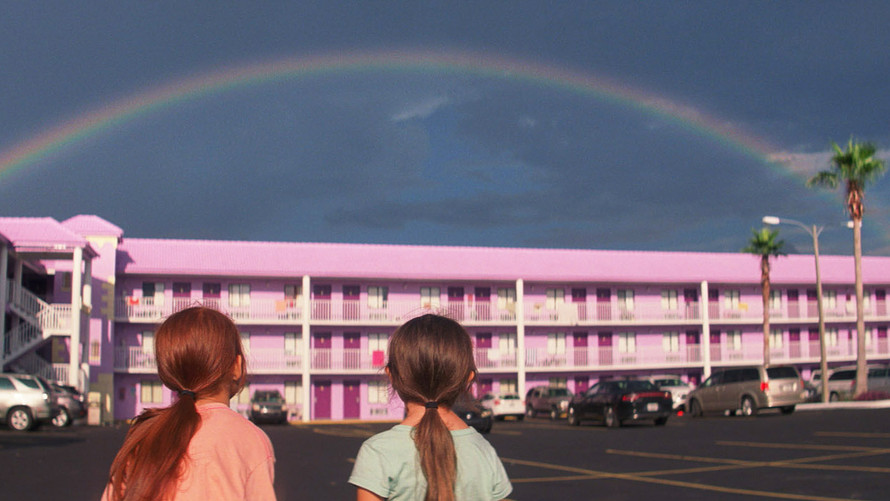 Moonee is the closest the film comes to a sympathetic character as her bratty behavior is explainable. The final act breaks down her bravado and for the first time the girl who has nothing is afraid of losing everything. I wish more of the film explored this concept instead of the day to day moments with little payoff.

The Florida Project is tough to watch at times given the hopelessness of the characters with no easy answers. Maybe that’s the point of a movie that stuck with me a lot longer than I expected.