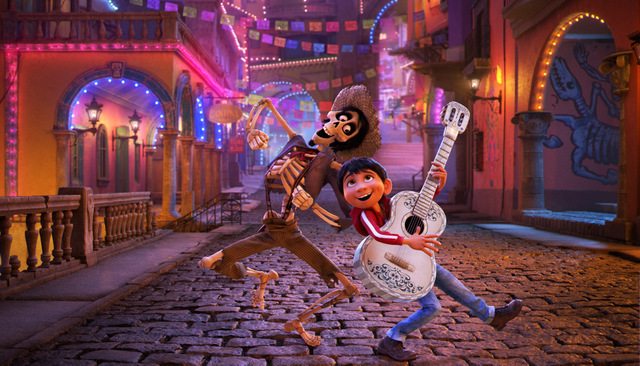 With one of its most inspired concepts, astonishing graphics and a great message on family, Coco is another Pixar masterpiece. It sits comfortably with Toy Story 3, Finding Dory and Inside Out as one of the best Pixar films this decade.

Miguel (Anthony Gonzalez) dreams of being a musician like his idol, the late Ernesto de la Cruz (Benjamin Bratt). Only catch is his family has forbidden any trace of music in the household after Miguel’s great, great-grandfather left his wife and daughter to pursue his singing career.

For Miguel, honoring his family’s wishes means ignoring his passion and he refuses to let his moment pass by. A freak occurrence whisks Miguel away to the Land of the Dead. This is one of Pixar’s most ingenious and gorgeous creations and it seems destined to be a major Disney World attraction. The colors leap out from the screen even without the benefit of 3D. 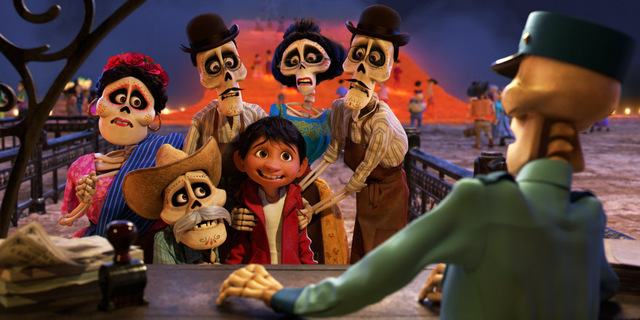 In the Land of the Dead, Miguel meets his ancestors who he recognizes despite their literal skeletal appearance. Coco’s character designs are amazing and the skeletons allow for some terrific moments of physical comedy.

With his ancestors upholding the music ban, Miguel has few options. He partners with Hector (Gael Garcia Bernal), a friendly loner who wants to visit the Land of the Living to see his family. Hector promises to take Miguel to meet Ernesto if he takes Miguel’s photograph back home. In the Land of the Dead, once families and friends forget someone they fade away forever. Miguel also has a time crunch as the longer he stays in the Land of the Dead, the more he becomes one of them.

Like all the best Pixar efforts, Coco is a truly complete film that takes viewers through a gamut of emotions — sometimes in the same scene. One moment will have you bursting out laughing while the next will leave you choked up. That speaks well of the script by Adrian Molina and Matthew Aldrich. Their screenplay honors all the various elements of love and passion and they find multiple avenues to convey a deep appreciation of family.

Pixar has always been inclusive with their films, but Coco is the first to be truly diverse. The cast is entirely made up of Latino characters, which feels incredibly groundbreaking in 2017. It’s obvious the amount of research and care Pixar put into creating an authentic Mexican experience in every aspect from architecture, clothing and tone. There’s even some cameos by legendary Mexican figures Frida and El Santo. Hiring Latino technical consultants to make sure Coco was respectful of the culture was another savvy move to get the film right.

Hopefully this is the start of a major shift in the mindset at Pixar with future films prominently featuring minorities. I could only imagine what the talent at Pixar could do on films with black, Asian or Middle Eastern characters.

Pixar has always struck the right balance with songs in their films. They rarely go the old school Walt Disney route and pack 5-10 songs in a movie, but in Coco the songs are an essential element and very heartfelt. Not surprisingly the best of the bunch, Remember Me, was written by the Frozen duo Kristen Anderson-Lopez and Robert Lopez.

Coco is a special experience and proves that for as great as the franchises are, Pixar’s true magic frequently results from original projects. Easily one of 2017’s best films, Coco warrants a standing ovation.