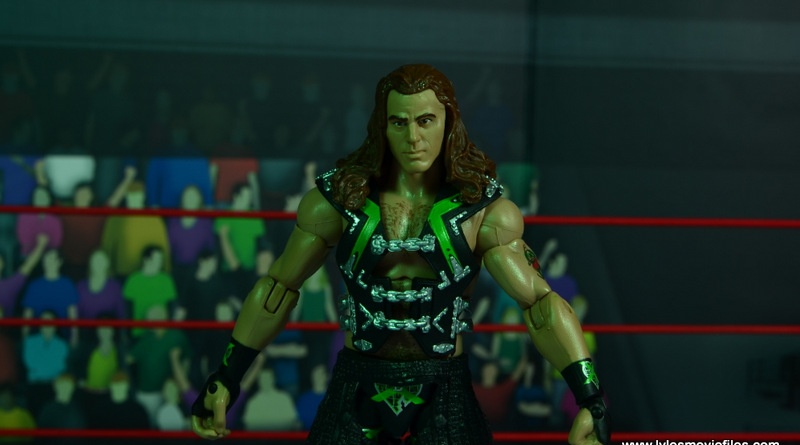 By 1997, I was fully smartened up to wrestling and knew it was much about backstage politics than on-camera prowess. Despite my insider knowledge, there was one guy earned my hatred like back in my childhood — Shawn Michaels. After screwing over Bret Hart for the title in Montreal at the infamous Survivor Series 1997, I HATED him. Every time he came on screen I wanted someone to shut his mouth. I’d say that made him the greatest heel I’ve ever seen.

Alongside Triple H, Chyna and Rick Rude, Michaels became even more obnoxious as the leader of Degeneration X. Fully riding Michaels’ hot streak, the WWF named its December In Your House in DX’s honor. Among the many HBK attires, the In Your House: Degeneration X gear has always been near the top. It’s one of Michael’s most iconic looks. Finally, after a long delay we get an IYH DX version of Shawn Michaels. Are you ready for this review?

Packaging:  From the moment I first saw the new packaging, I knew I was going to be a big fan. The box is far more streamlined and less edgy like the more recent packaging. I like the grey/white backdrop with the DX green accents. I also like the authentic picture instead of a drawing. 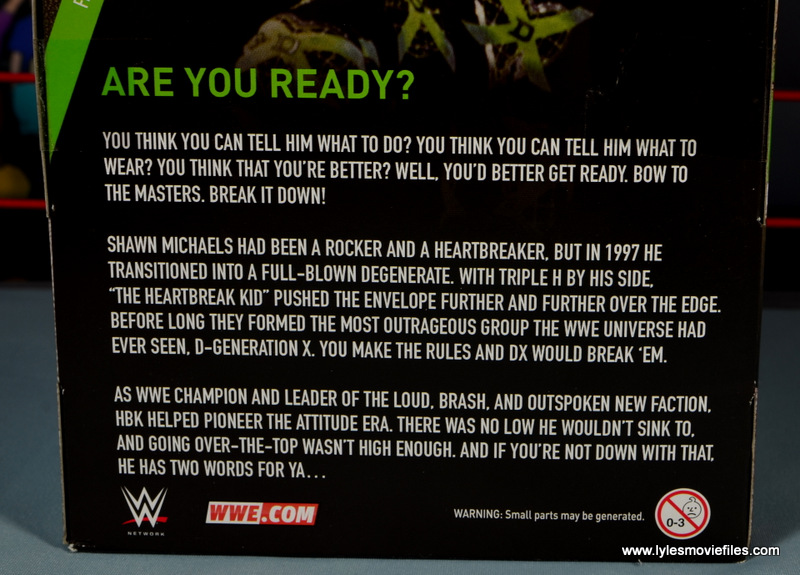 The stat placement is better as well and it allows Mattel to use the majority of the rear package for a write-up. This is exactly what I’d like to see from every figure in 2018 from Mattel. 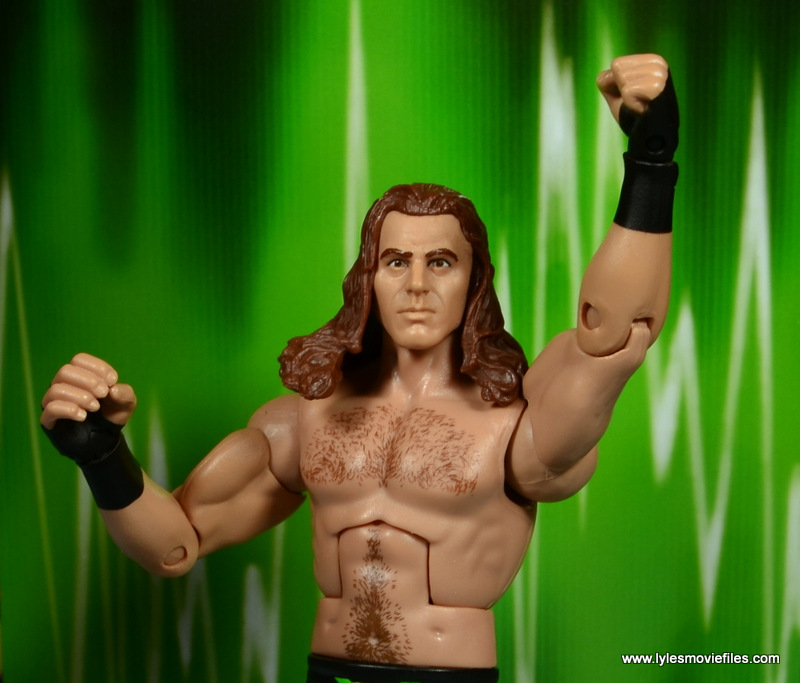 Likeness:  I’ve gotten seven Shawn Michaels figures without really trying. Mattel has generally captured his look well enough, but this is easily the most disappointing. For starters, this was the era where Shawn wore his hair in an intricate, braided ponytail and he sported a scruffy light beard at this time. This was a visual departure from his long hair pretty boy days as a top face from 95-97. 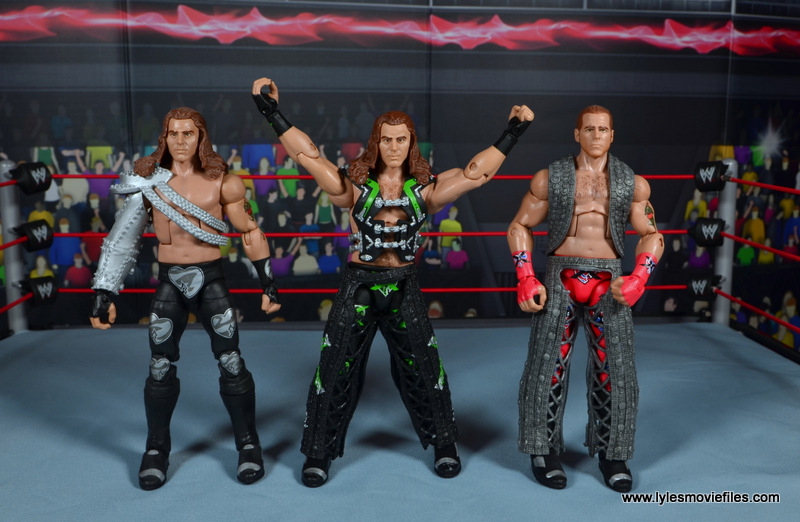 So naturally, Mattel goes with the Elite 19 head sculpt, which is not even remotely accurate to this look. Thanks to the braided ponytail, Michaels’ head never fell down and it stayed that way throughout the match. It’s especially lazy considering Mattel could have just recycled the WM 14 head sculpt. While not entirely accurate, it would have worked instead of a completely incorrect head choice. This would sorta be like Mattel releasing a 2000 Invasion era Stone Cold Steve Austin with the Ringmaster head sculpt. 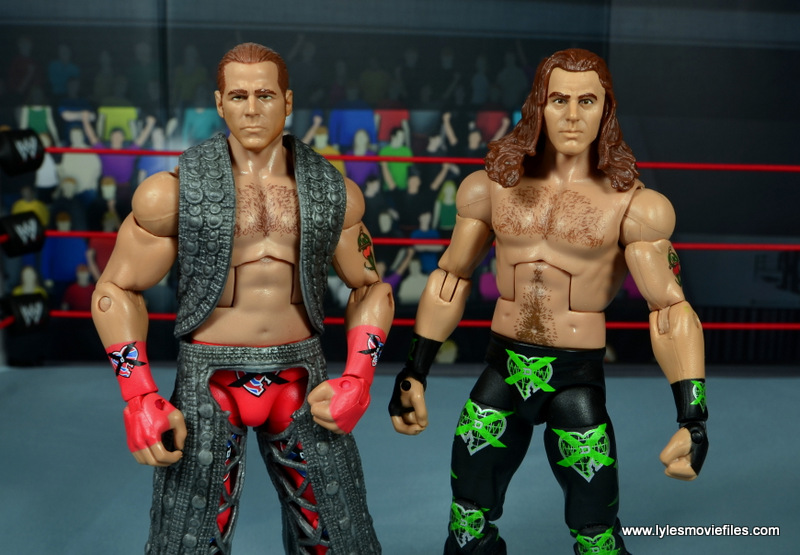 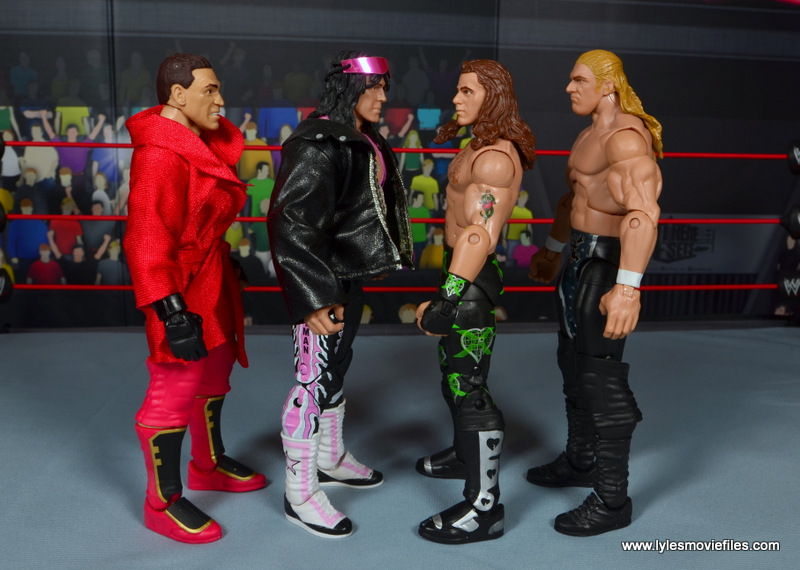 Scale:  HBK stands at 6’1”, shorter than the 6’4” Triple H and taller than the 6’ Bret Hart. The scale is perfect to HHH, but just a fraction off from Hart, which I won’t be that picky over. It’s close enough. 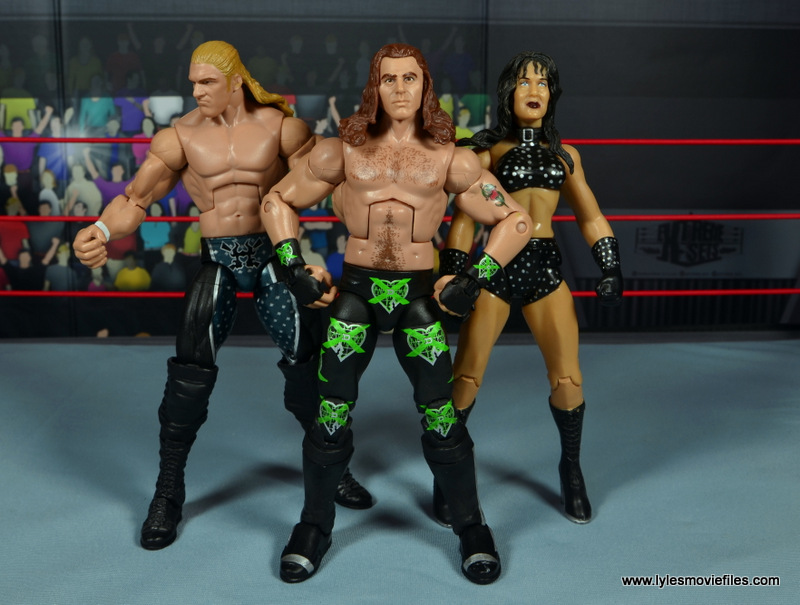 Paint:  Once again, Mattel takes some annoying shortcuts. One of the cooler aspects of this attire was the gradient paintjob on the X. It was mostly green, but also included a blue gradient on the tips. This gave the outfit a more unique look. The figure has the standard HBK heart logo with the DX on top and grid interior. Besides the omission of the gradient, this looks pretty good.

I know Mattel didn’t really care about being accurate with the head, but it would have been nice for them to at least paint the beard. 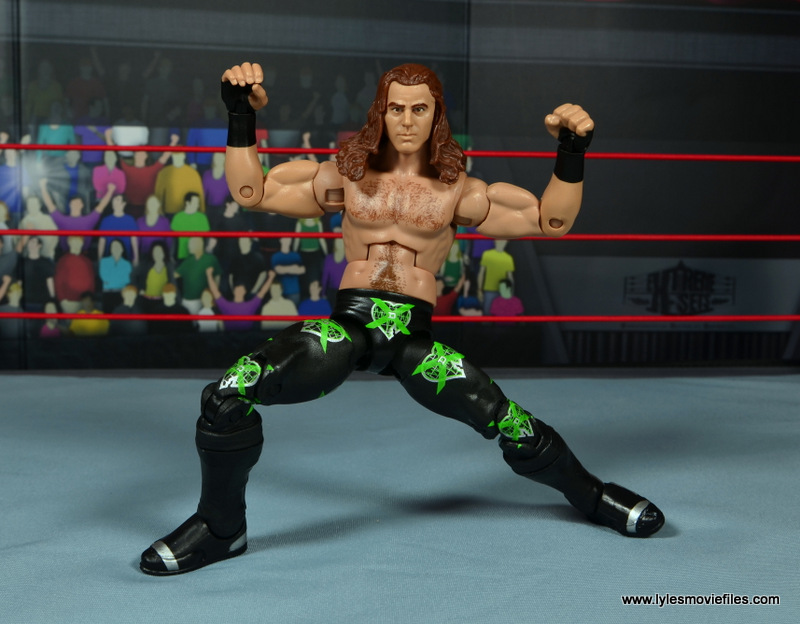 Articulation:  Shawn Michaels is arguably the best wrestler in history. Thankfully, the Elite articulation makes it a breeze to faithfully re-enact all of his moves including an unassisted Sweet Chin Music. 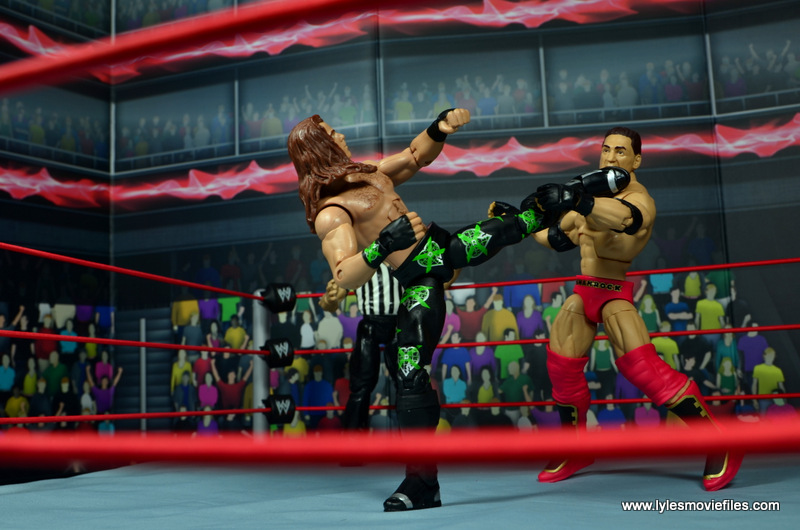 Accessories:  HBK comes out better on this end. The signature vest he wore to the event is faithfully captured. It’s clear this is where the bulk of the attention went as it features all the intricate sculpt work, the chain connections and proper design. It really looks great. 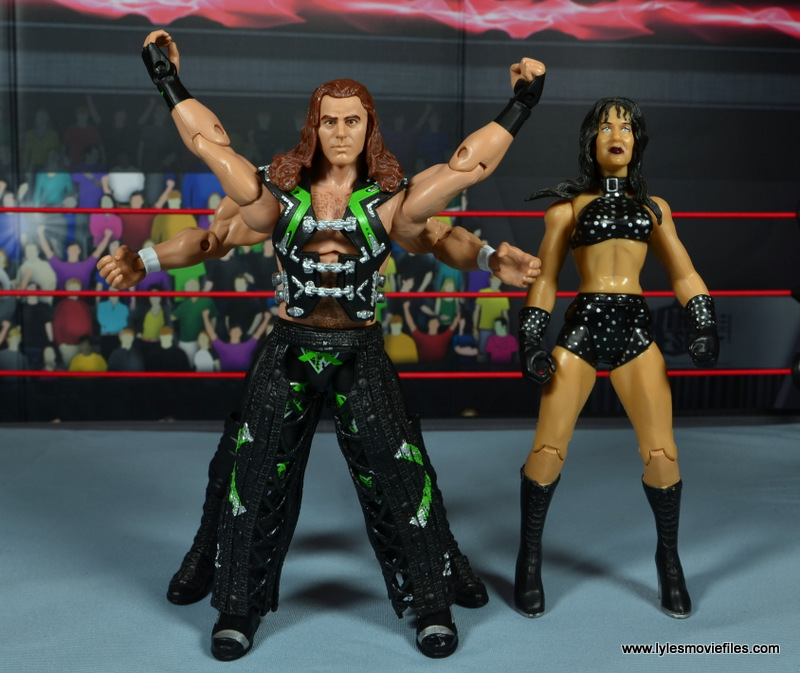 The legs aren’t correct though as Shawn wore simple leather chaps. Mattel reused the WM 14 chaps, which feature more details. It looks a little weird, but I get the reuse here since there’s not a lot of potential to put them with other figures. An old school WWF title would have been nice here, but I’ve got a ton of them at this point.

This is a barebones effort on this considering other Ringside Collectibles come with a lot more on the accessories front.

Worth it?  I managed to get HBK for $22, slightly more than the standard Elite figure, but not an awful price for an exclusive. 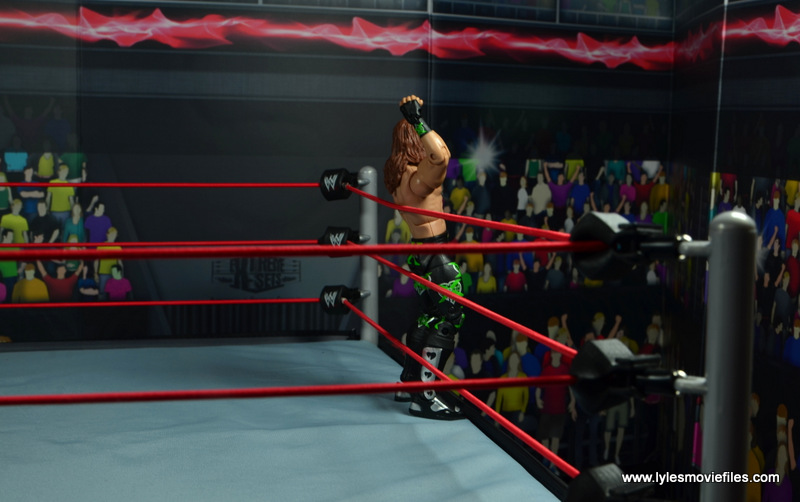 If this was a regular release figure, I’d be more forgiving, but I expect online exclusives to feature superior effort, not less. I’m not looking forward to tracking down a WM14 head and painting the gradient on. 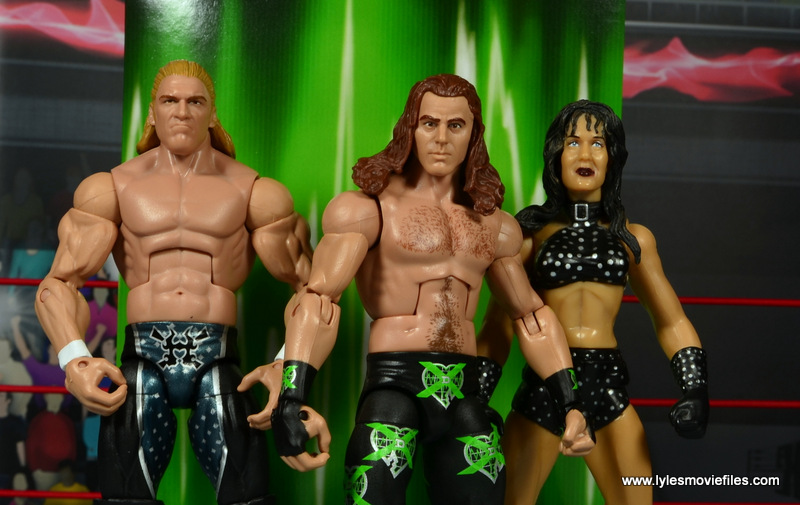 Where to get it?  This is a Ringside Collectibles exclusive so that’s the only place to go. If that’s not an option, check out Amazon, which has a slight markup.