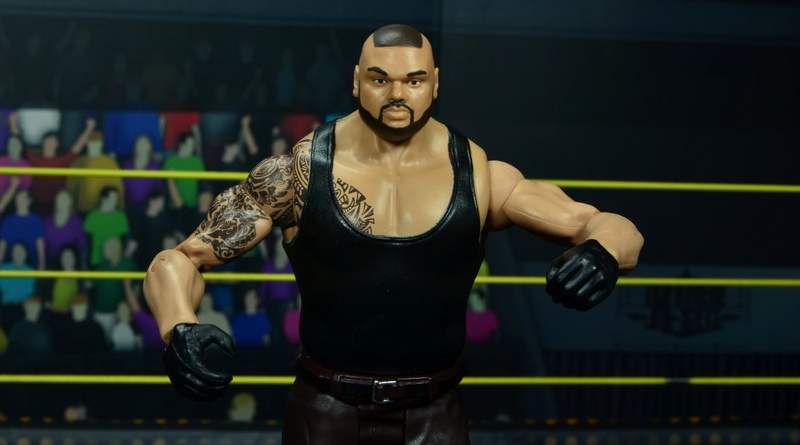 I rarely buy figures with the purpose of just using them for customs. I don’t have the time to make them look as nice as I’d like. Other times, it’s just too easy not to. That’s the case with the NXT TakeOver Basic Akam figure. I dig the Authors of Pain enough to hold out for Elite versions, but there was a custom project where a ton of articulation wasn’t necessary. I’ll reveal the custom a bit later, but for now let’s look at one half of the Authors of Pain.

Packaging:  Mattel is switching up the packaging across the lines for 2018. NXT has the least changes, which was fine since their packaging was so good to start. The white, yellow and black color scheme really catches the eye and the Topps collector card button takes me back to the 90s. The back is simple enough with a big portrait of Akam — the same used for the front with a breakdown of the various figures you’ll need to Build the Table. 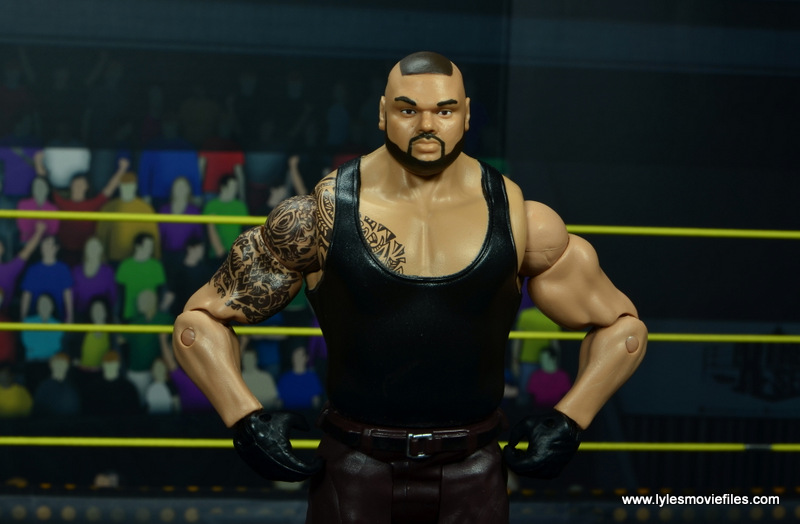 Likeness:  Sculpt wise, this is pretty close to Akam. Mattel used a great stocky torso to capture his girth and his arms look big, but not overly developed. The pants lack the typical detailing of pockets and knee pads, which hopefully will be included on the Elite version.

Scale:  Wrestling in NXT helps Akam look like a giant, but he’s “only” 6’2”. That’s good enough to look down on the 5’10” Revival, but they’re actually shorter than the 6’4” Dean Ambrose.

Paint:  Mattel finally seems to have a better handle on skin tones. Akam has the proper shading and isn’t overly tan or dark. That’s a big accomplishment for Mattel. The detail work on the tattoos is very impressive and since he doesn’t have any color in his, the Basic level tattoo color isn’t an issue.

But the one catch, cause you knew one was coming is the hair. The Mohawk is too sharply defined where Akam has his hair more like a fade with the sides shaved. The goatee is OK, but is a little too neat. There’s an usual high amount of slop around the shirt. 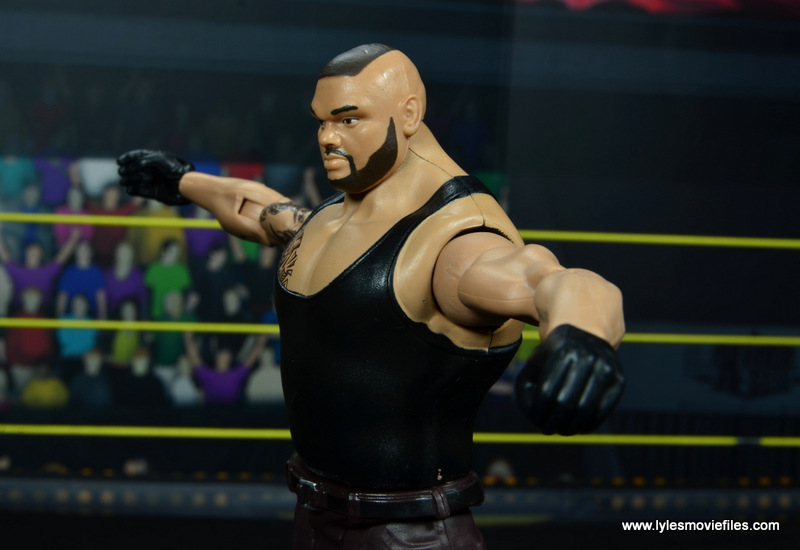 The combination manages to throw off the likeness a little until you look at the figure closer. I’m also not loving the brown pants. Rezar’s figure has black pants, which is the typical AOP color so I’m confused why Mattel went with mismatched look for a tag team. 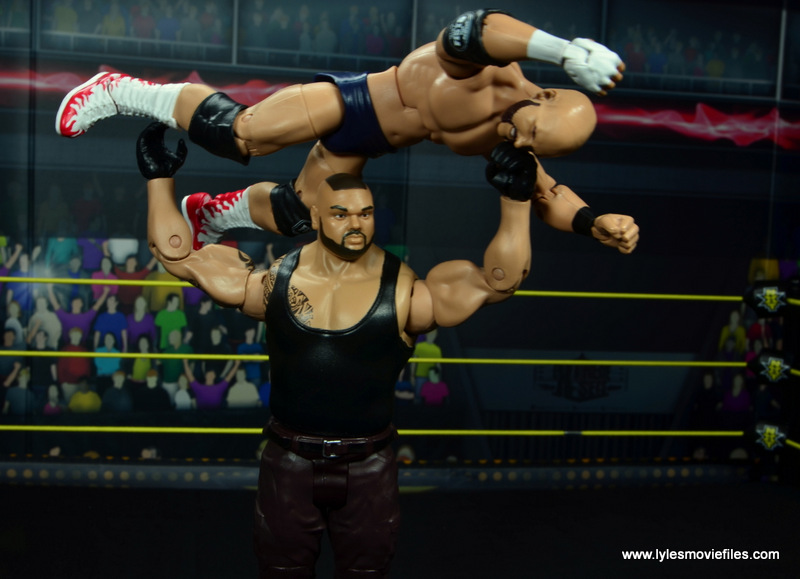 Articulation:  This is a Basic figure so no complaining about the missing articulation. For big burly brawlers like AOP, the limited range of the hips is the only issue as it restricts some power moves. But if you prefer Akam in full no-sell mode, this figure’s articulation is fine. 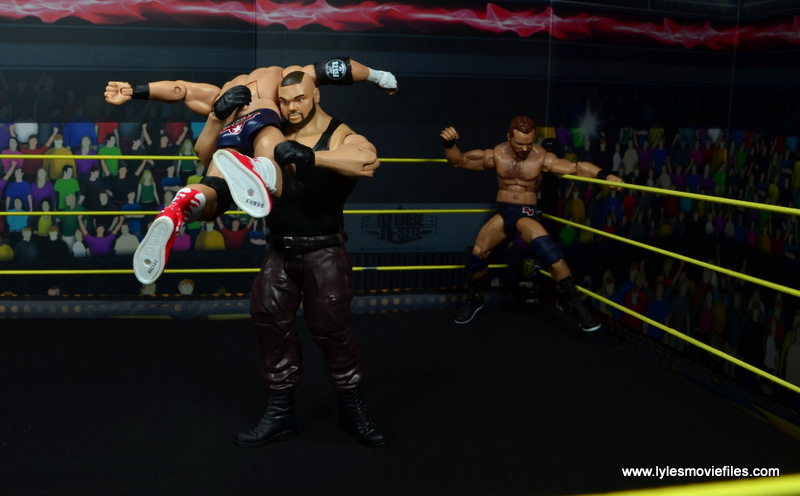 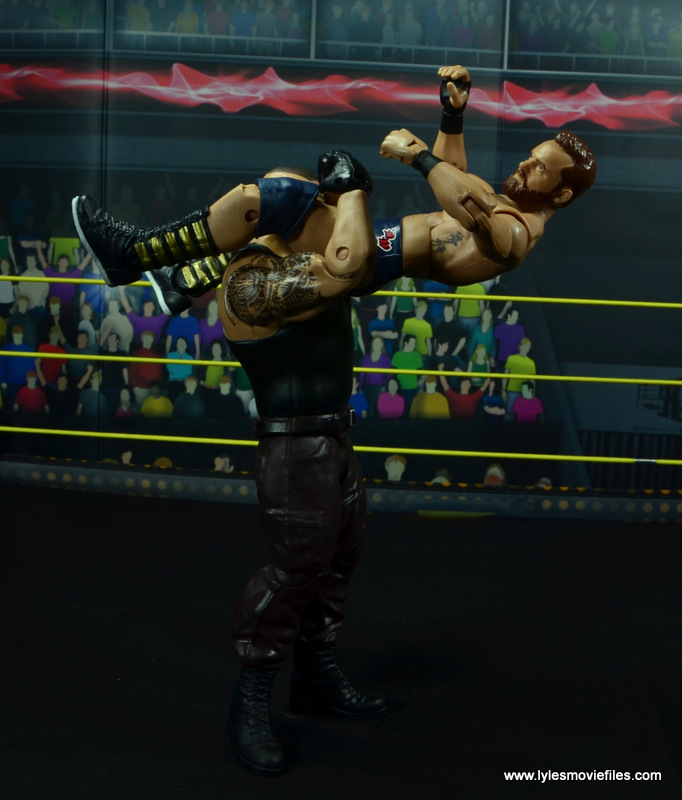 Accessories:  With the new Build a Piece component, Mattel is adding some accessories to Basic figures. Unfortunately, a commentator table is probably the most boring possible choice. And it’s not really that big a selling point if people can just buy a table without tracking down four figures.

Akam has a side of the table and a monitor to gently remove before demolishing his opponents through the table. And if you’re a card collector, there’s a Akam card included. 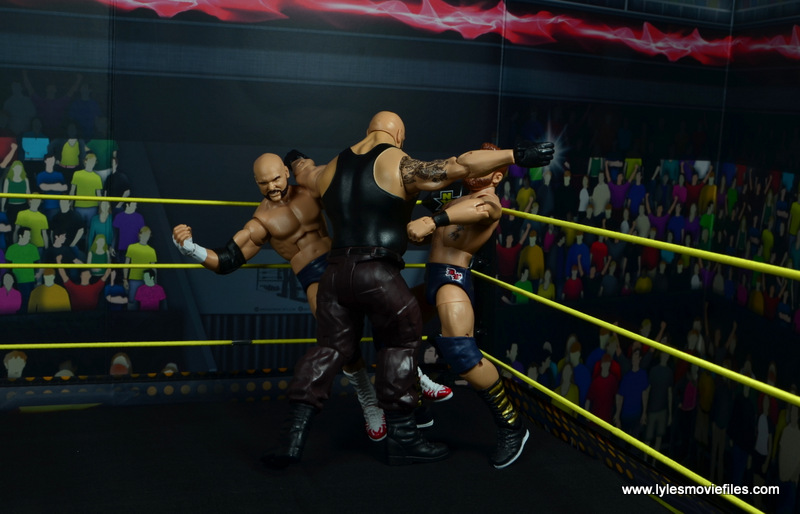 Worth it?  The standard Basic figure price is $11.99. That $2 price hike is for the card and Build a Table piece. In this case, that’s not worth it and I’d suggest just waiting until the next sale for a better deal. 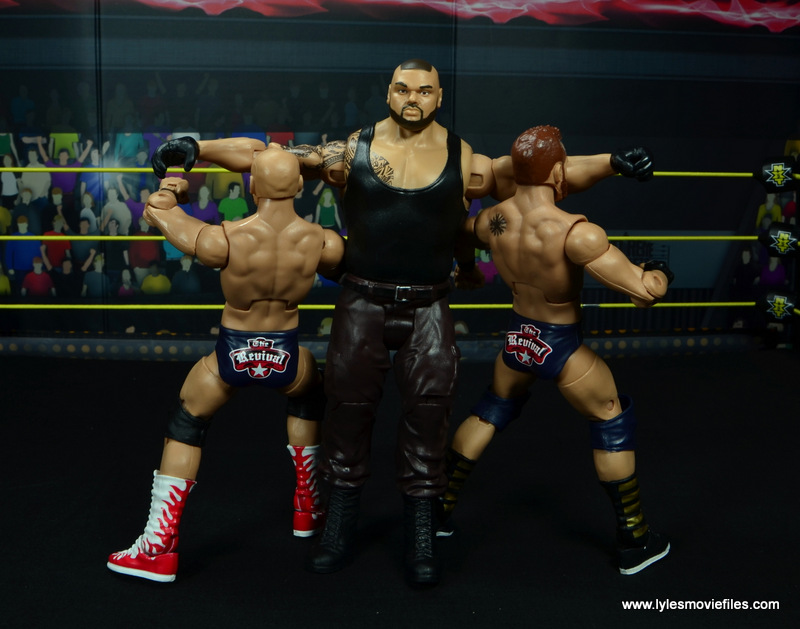 Where to get it?  The NXT line is exclusive to Target. Go there and avoid all the hassle of trying to get Akam from secondary retailers like Amazon unless you’re in an area without any nearby Targets.’

Get Akam from Target.com