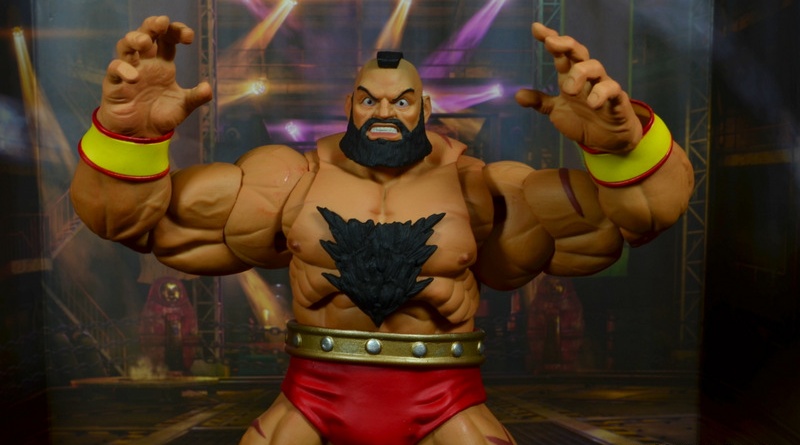 In playing through the Street Fighter V story mode, it wasn’t Ryu, Chun-Li or even Nash who stole the show. It was The Russian Bear himself, Zangief. I’ve been slowly diving in to Storm Collectibles fighting series line and Zangief was the one that pushed me over to a full-fledged commitment. And the big guy does not disappoint.

Package:  It won’t take long to notice Zangief is a big boy. The package takes up a lot more space than the regular figures. The front has a nice portrait from the game while the back showcases the accessories and the excellent bio. 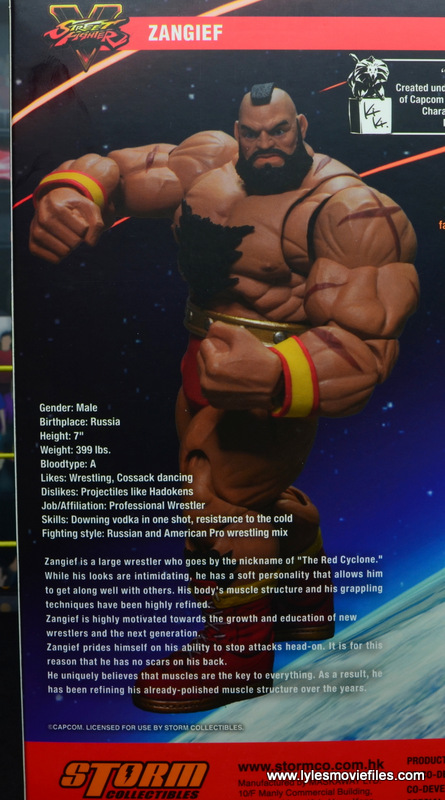 There’s layers to the package so be careful that the big guy doesn’t fall out and break your foot. As usual, the final layer has an included backdrop. I appreciate those since they provide immediate dioramas. 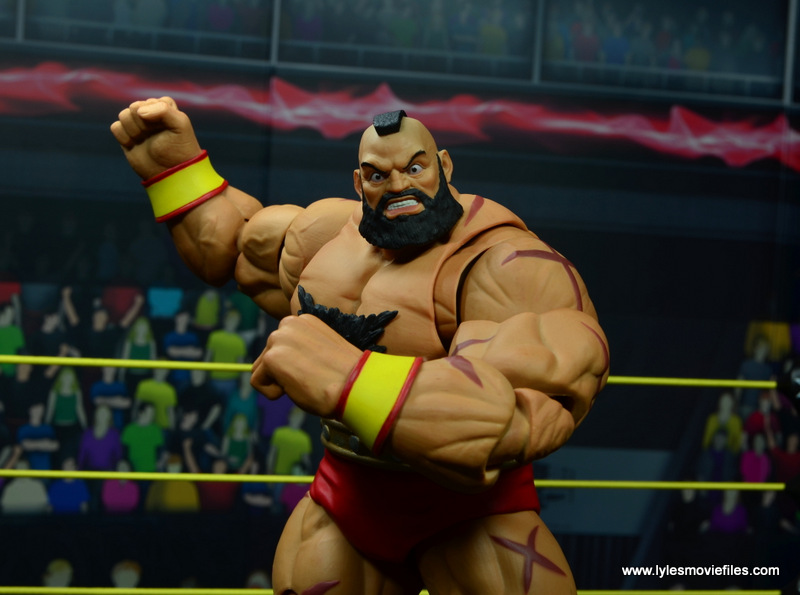 Likeness:  Unlike some of the other SFV characters, Zangief’s look is largely unchanged and he didn’t get an exaggerated build. He was already huge. Zangief looks like a wrestler and all the signature elements like the laced boots, trunks and belt look terrific.

There’s great sculpting with the muscular right down to the veins, scars and hair on his chest and shins. Zangief’s default head sculpt has him focused and serious. Depending on how comedic and boisterous you prefer Zangief, this probably will be your least favorite, but it’s a great portrait. 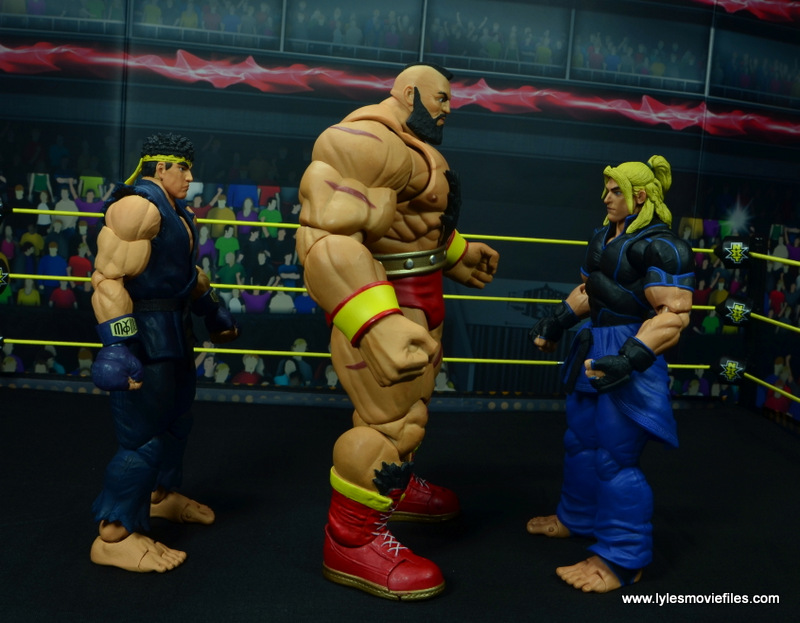 Scale:  Zangief is not a shrimp. He’s massive in the game and this figure doesn’t disappoint. He towers over everyone. I love that SC didn’t compromise on his scale to get him to fit easier in their line. 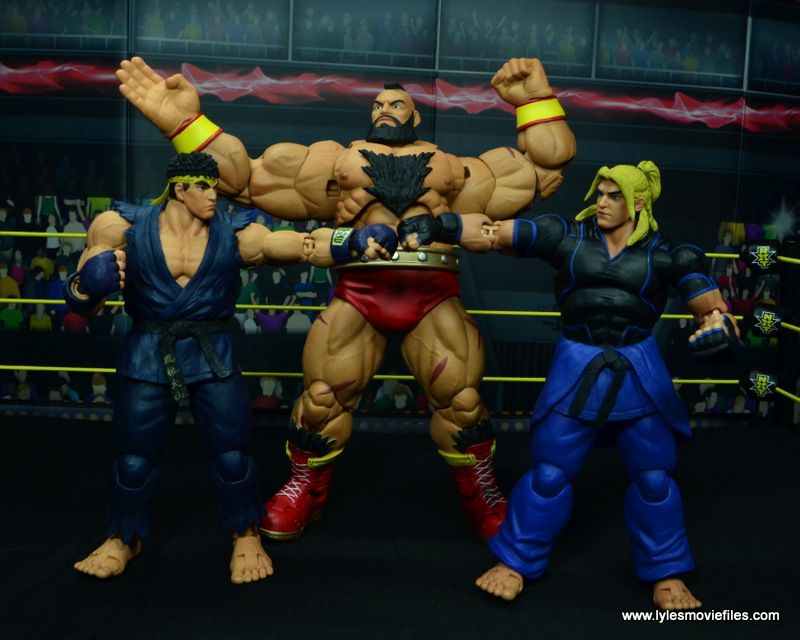 Paint:  There’s not an overwhelming amount of paint elements here, but there’s some fine detail work like the scars, the two-tone armbands and the boots. I haven’t seen a Storm Collectibles figure with bad paint applications yet and it’s nice to see a younger line already proving so reliable. 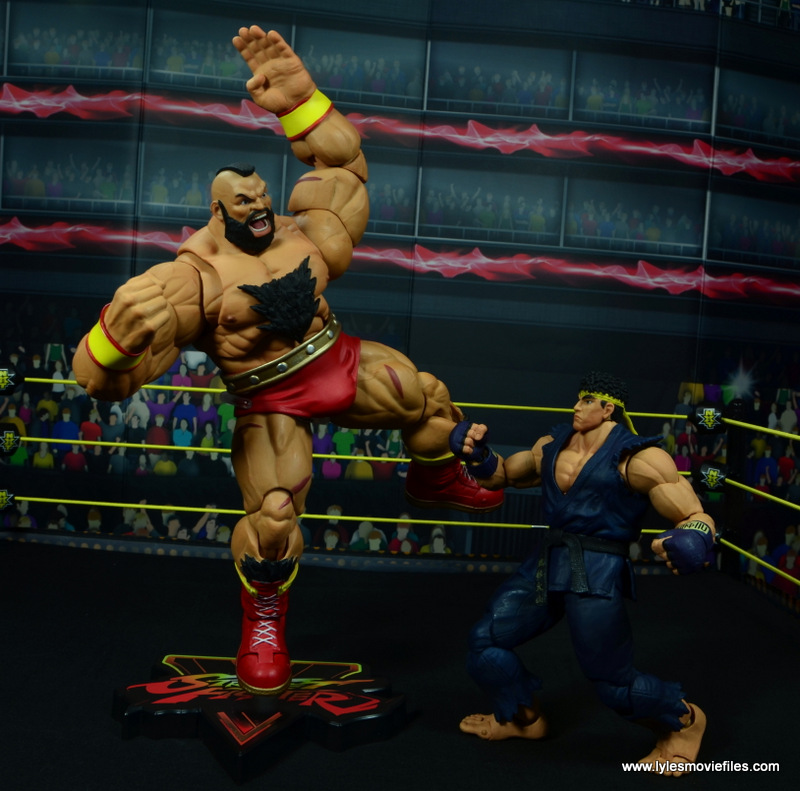 Articulation:  Zangief is a towering, lumbering character in the game who has quick strike ability. The key with his figure is getting that perfect crouching position as he closes in on other figures. The articulation here is incredible. I could pull off suplexes and all kinds of various wrestling moves. Piledriver was the one tricky one, but I was amazed at how easy and smooth SC handled his articulation. 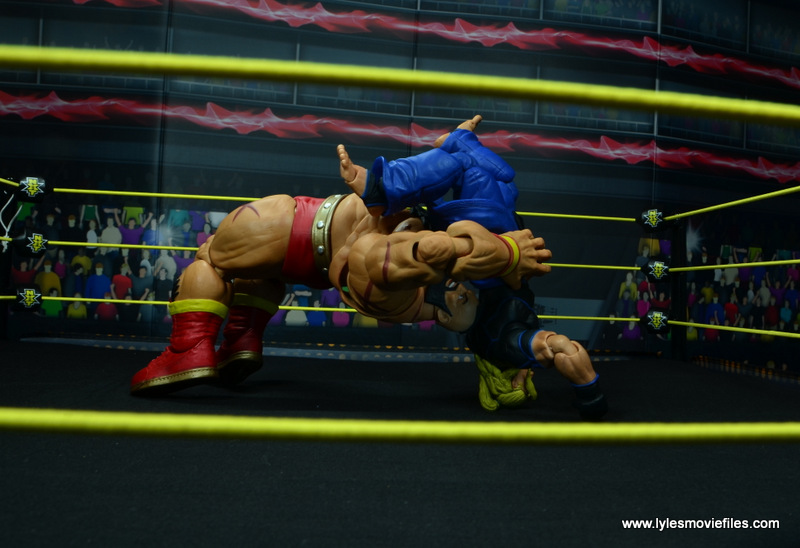 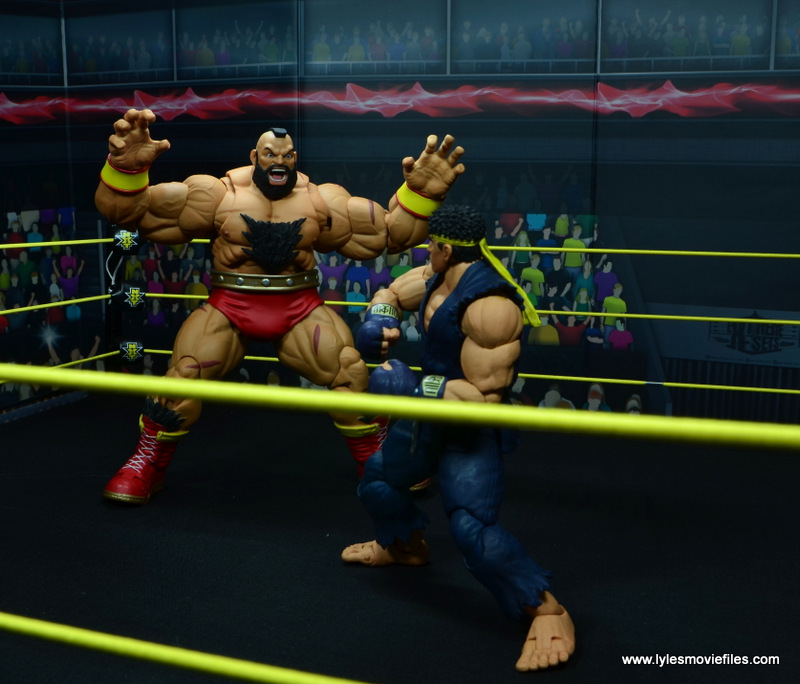 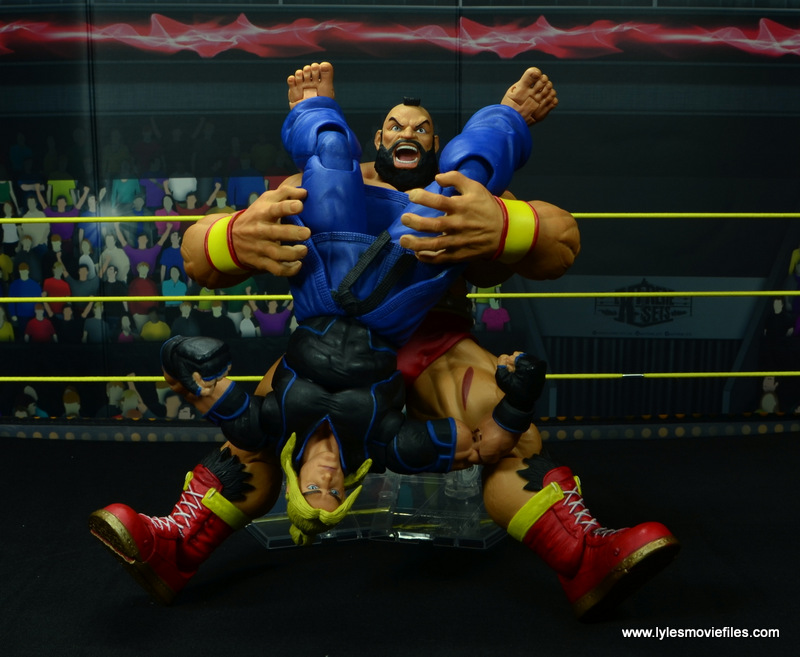 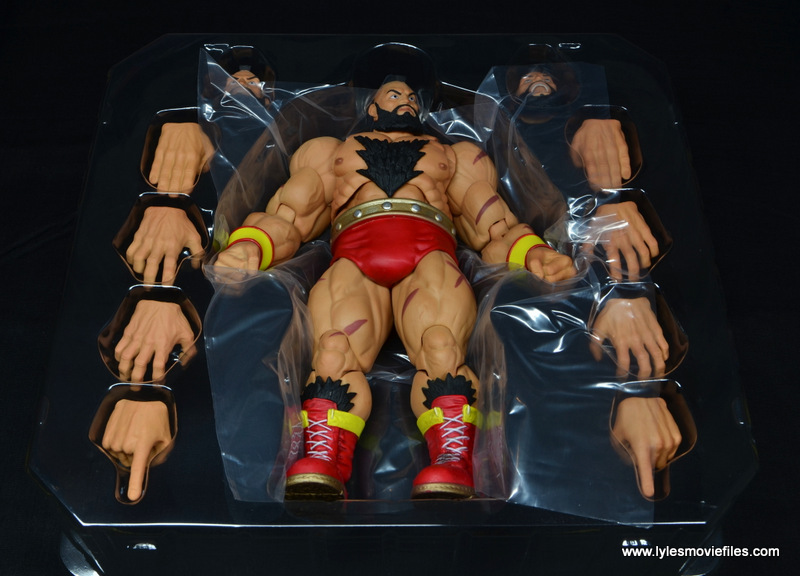 Zangief has two alternate head sculpts. One is a slightly irritated, teeth gritted expression and the other is a full open-mouth version. I like how SC gave us different enough expressions to convey his mood as a fight progresses. That adds a tremendous amount of versatility.

There’s four other sets of hands: a gripping, index fingers up, open palm and crushing. Basically every kind of possible Zangief pose you can imagine is possible with these hand options. They swap in and out with no problem. I wish more companies made this an easier process (cough Figuarts cough). 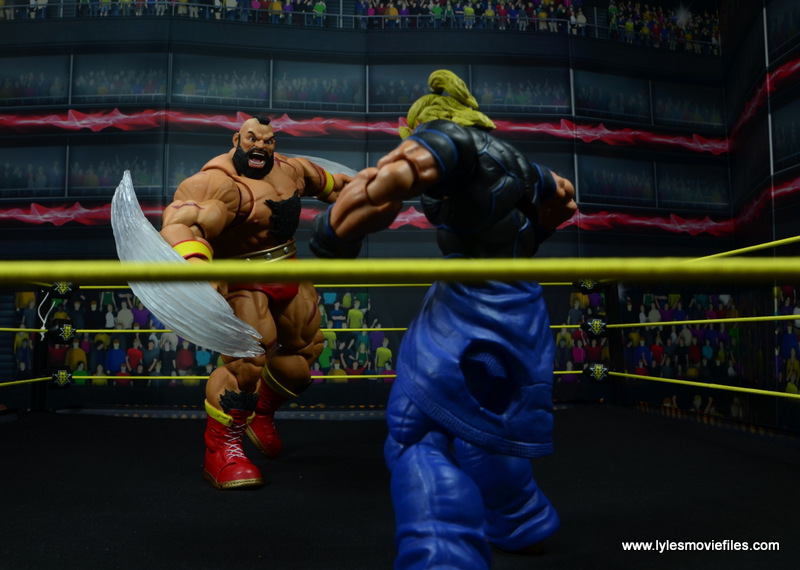 One of the cooler accessories are the hand wind gusts from his whirling cyclone move. Clearly SC couldn’t toss in a full cyclone effect, but this gets the job done and is a great touch. 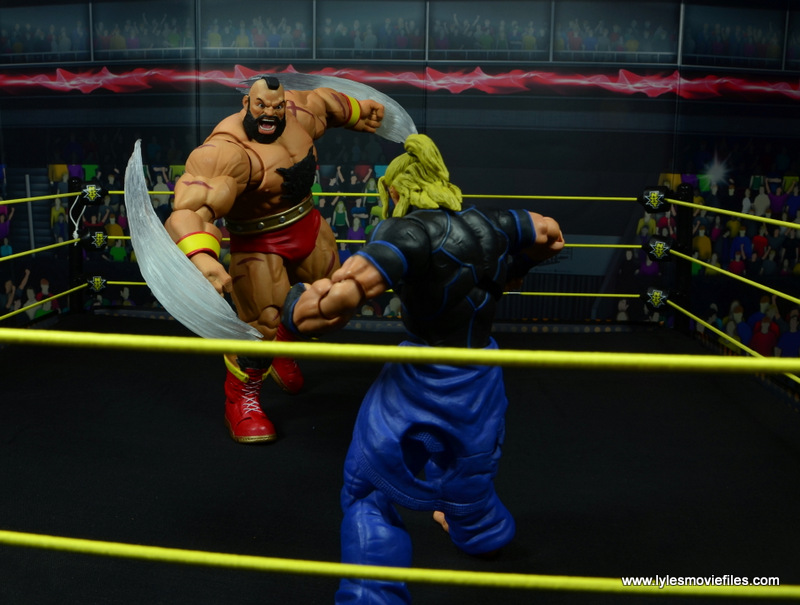 SC also provided a stand to accomplish some of those trickier poses. And Zangief has a stage appropriate backdrop. It’s a little small to get much use out of it, but the thought is appreciated. 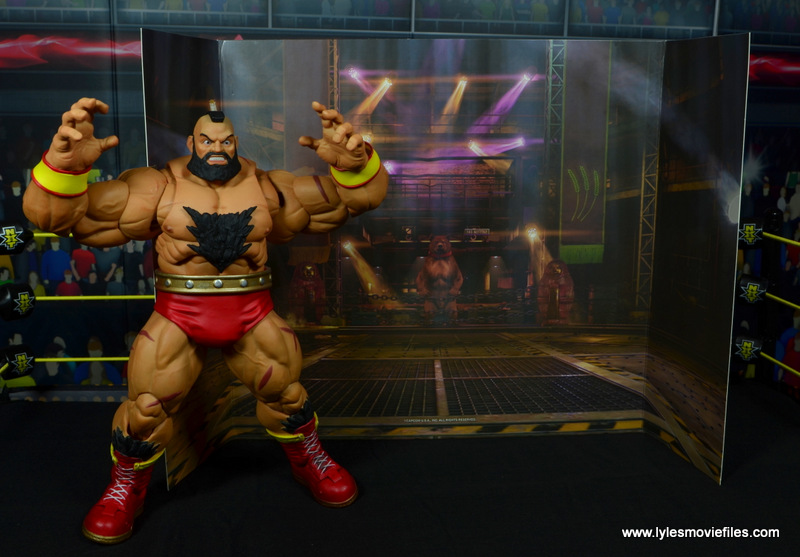 Worth it?  Zangief clocks in around the $95-$100 range. While that’s not cheap, with his bulk, mass and range of accessories that doesn’t seem like an unfair price.

So far this Storm Collectibles line hasn’t missed yet. Zangief is such an impressive massive figure and his articulation puts him over the top as another winner. 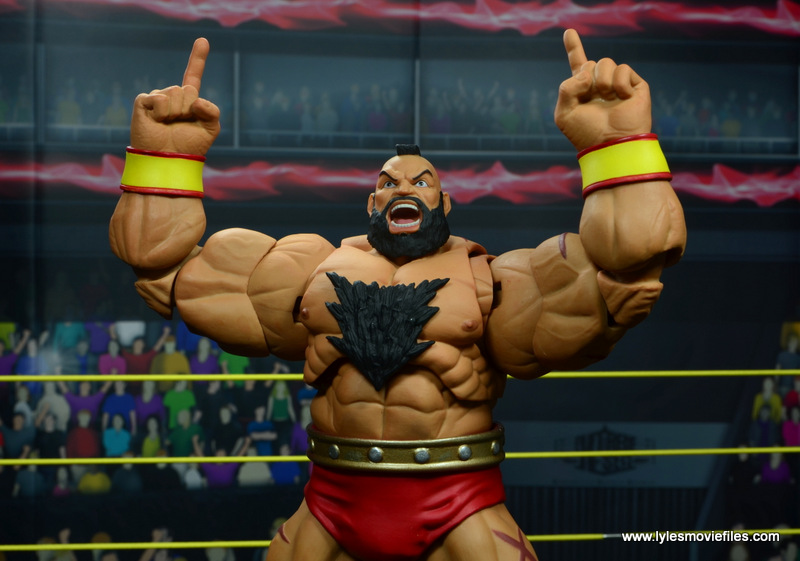 Where to Get It? Start off with Entertainment Earth or Big Bad Toy Store first. Then give Amazon.com a shot or hopefully you’ll get lucky and find him for a deal on eBay.