Yes, I’m one of the folks who thinks it’s absurd that Kane is still prominently featured as a main event star on WWE these days. I blame my figure OCD for feeling the need to get this latest Kane figure. After getting the classic and inverse color flashback, I wasn’t anticipating buying another Kane. But then, I realized he would fill in some holes like my Survivor Series team series and add another team for the March Bashness 2018. So let’s take a look and see if Mattel burned me with this latest version of Kane.

Package:  There’s no real change from the standard Elite presentation here, but the accessory actually helps it stand out more than the norm. 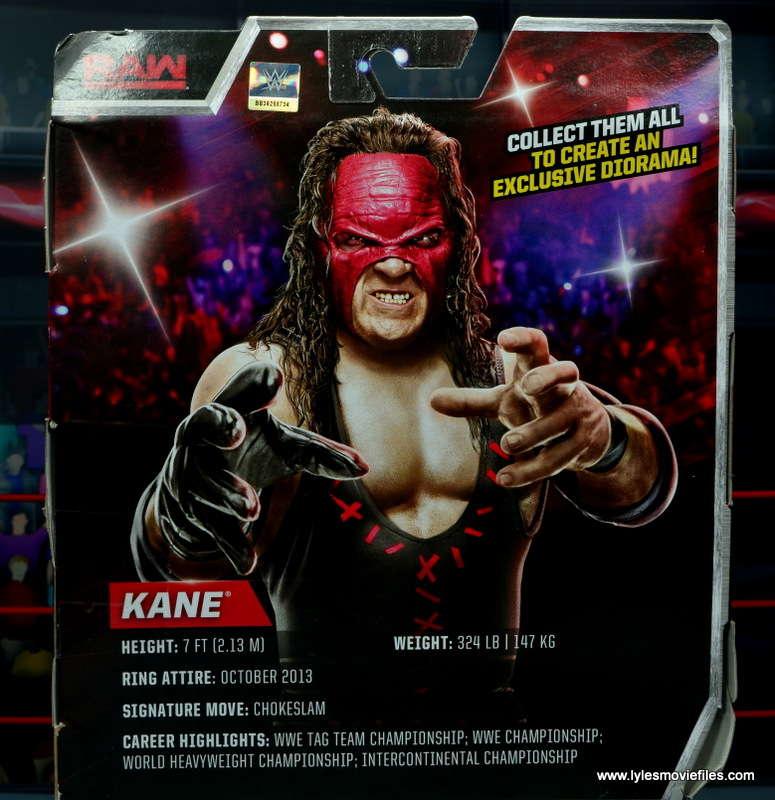 As for the rest, it’s the same tired red and silver color scheme that’s ready for retirement. I can’t tell you how thrilled I am to be wrapping this packaging up. Just a few more figures left to go now. 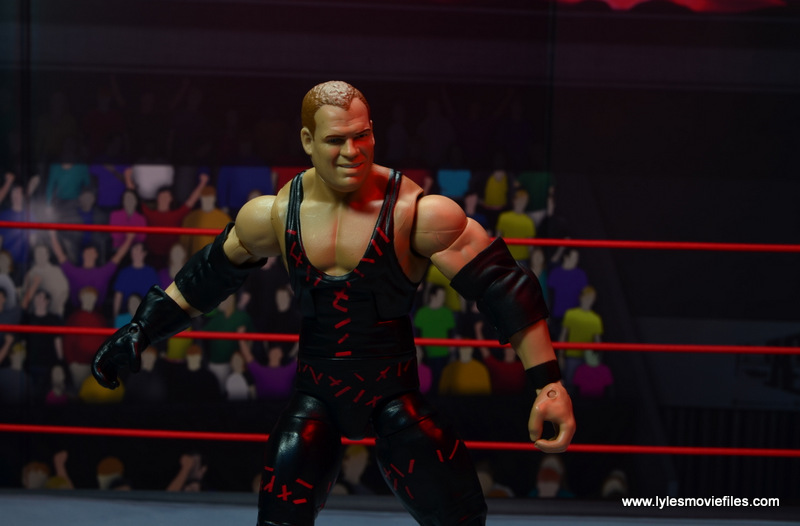 Likeness:  Kane is a monster and this figure does a great job of capturing that with a broad, slightly defined body. I’m hate the smiling headsculpt as Kane rarely seemed this happy. I’d prefer an expression similar to the Elite 31 figure. It’d be one thing if it was the creepy sinister smile, but this is like an all is right in the world of Kane kind of smile. Maybe that does make it creepy now that I think about it… 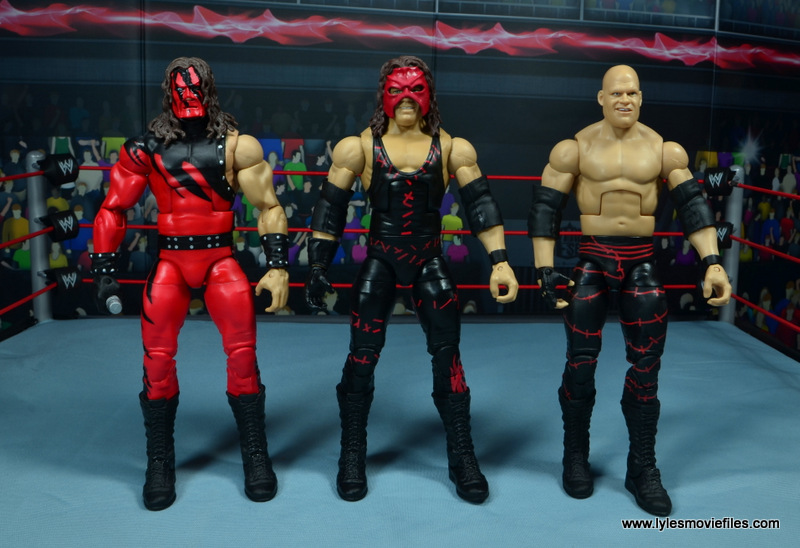 The rest of the figure is familiar if you’ve gotten any modern Elite Kanes. I do like that stitching on the outfit. It recalls more of Kane’s horror movie character roots.

Finally, the mask/hair piece almost takes Kane in a completely sinister direction. It has great detailing and the hair looks much more authentic than the one Kane wears now. The fit is just a tad off. I was able to position it mostly correct, but the eyes would never fully match up with the eye slots. And any moment would mess it up. Still, this is pretty good. If it only weren’t for that smile. 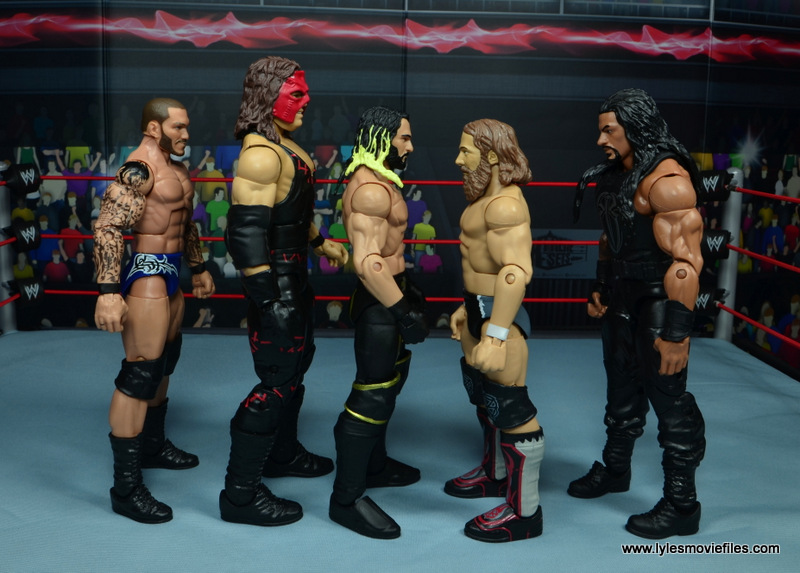 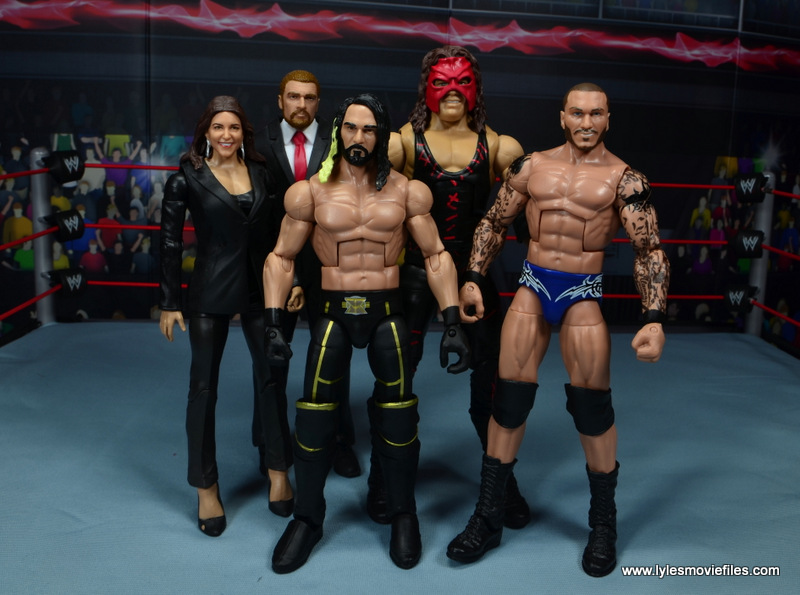 Scale:  Kane stands at 7 feet. That puts him the same size as Big Show and two inches taller than Braun Strowman and towering over the 5’8” Daniel Bryan. Mattel has always been good about making the giants appropriately taller than the baseline figures. 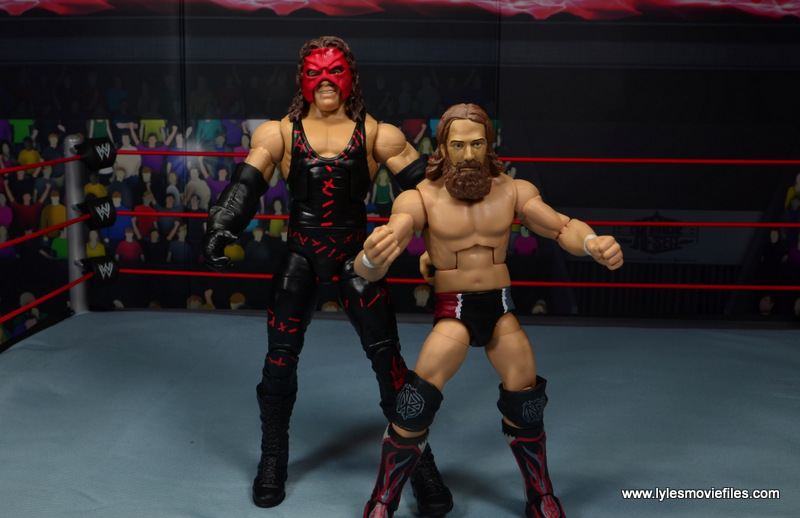 Paint:  The paintwork is solid here. Most of the work is the paint for the outfit stitching. I wish Mattel could have done a wash to darken the mask. It’s a tad too bright and looks like one of those Kane masks kids would wear in the crowd. And Mattel didn’t paint the back of the mask that shows through the hair making it look even cheaper.

I do like the extra attention to detail by giving Kane mismatched eyes. Mattel has gotten a lot better about those minor details that bring extra value to their figures. 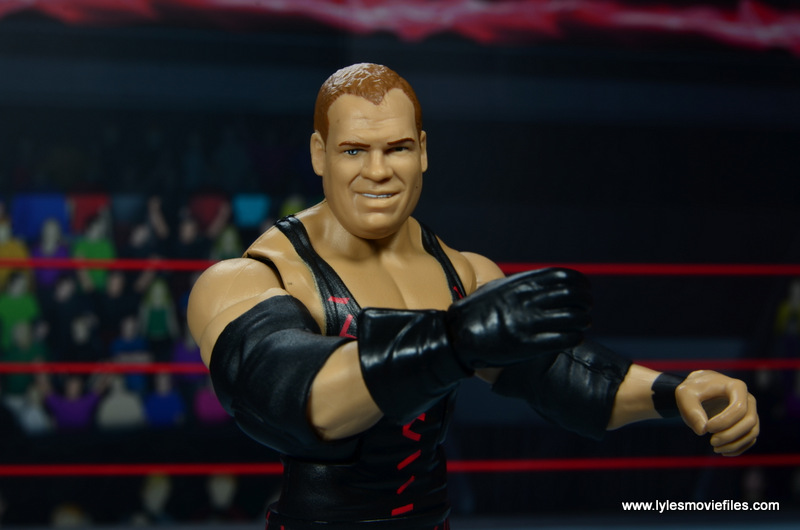 Articulation:  Similar to the other giant size wrestlers, Kane really benefits from the Elite articulation scheme. Most of the moves in his repertoire aren’t too tricky to pull off. Chokeslams would be easier with a wider open right hand, but you can almost get it done just right. 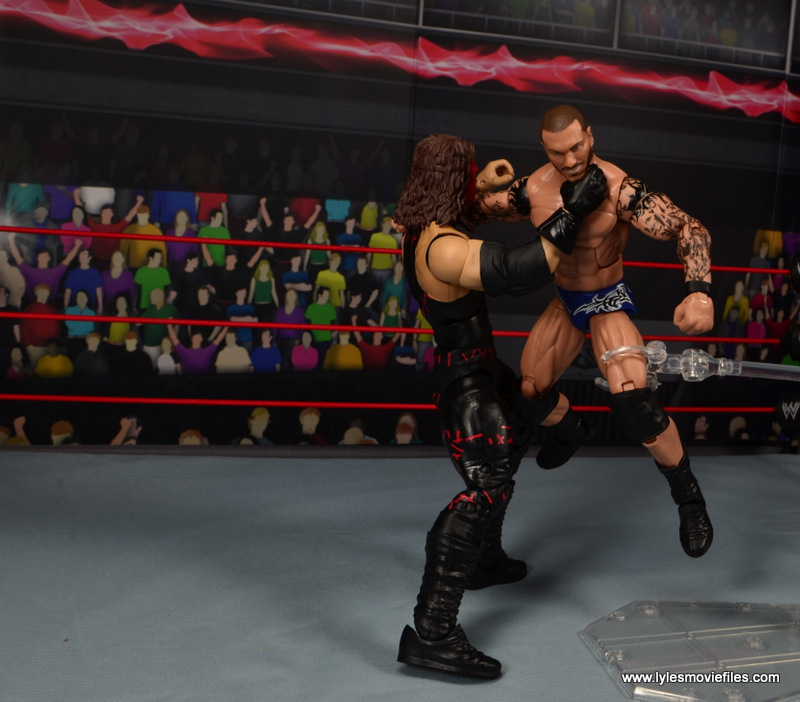 Those elbow bands are a very annoying as they cut into the articulation where the figure won’t hold poses. You can still work with them, but they don’t have as much give as I’d like. The absolute coolest articulation aspect with Kane is I was able to actually clasp the hands when doing a tombstone. 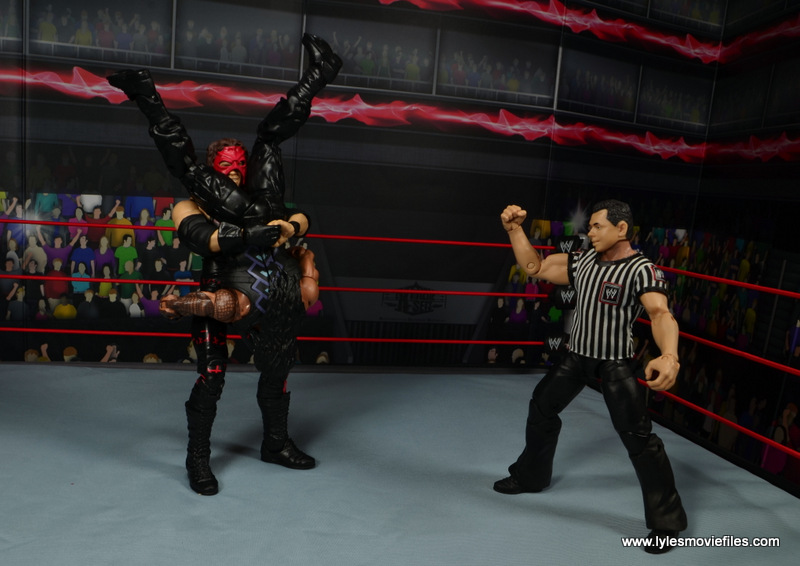 Accessories:  I’ve been talking about Kane’s most useful accessory — the mask and it’s very helpful in providing multiple looks for Kane. Typically, this would be two figures from Mattel. I appreciate having the flexibility here to incorporate a couple of eras with one figure. 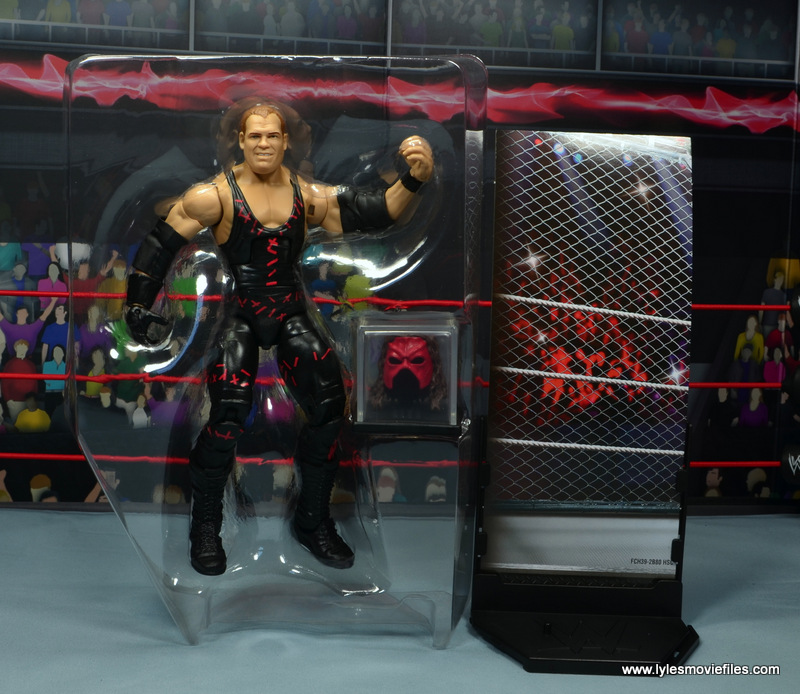 It’s packed in a cool display case. That will prove useful for a ton of set ups so I really like this one. And he’s also got that worthless stand which is just a waste. 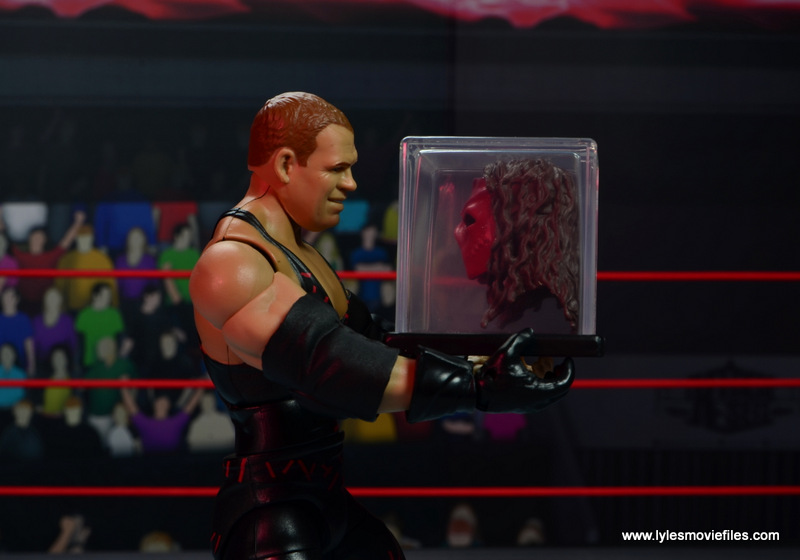 Worth it?  As useful as I found Kane, I wasn’t pressed to get him for the standard $20 price tag. When a deal came to get him for $12, I happily grabbed him.

The smiling head sculpt really doesn’t conjure up The Demon and the lack of mask wash diminish him somewhat. He’s perfectly solid as a modern masked Kane figure. 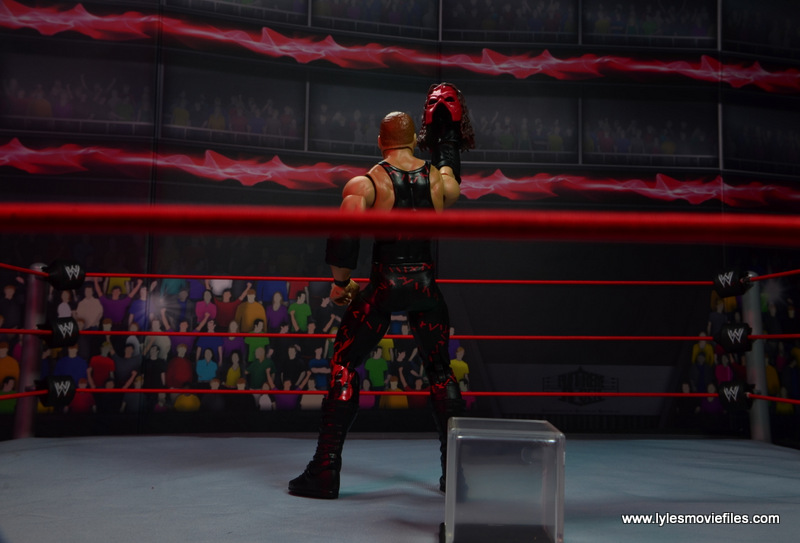 Where to Get It?  Kane is from Series 47B so there’s little chance of finding him in stores now. If you want to track him down, I’d recommend Amazon.com at this point. 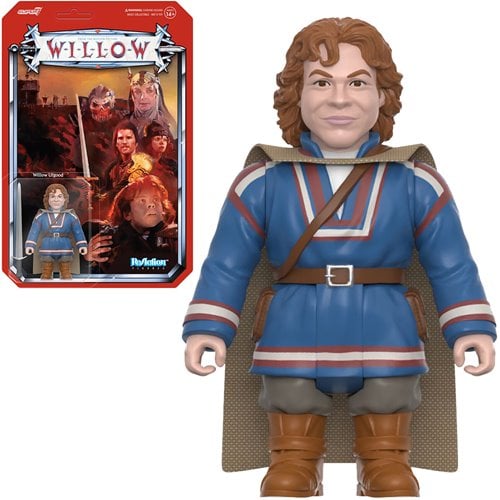