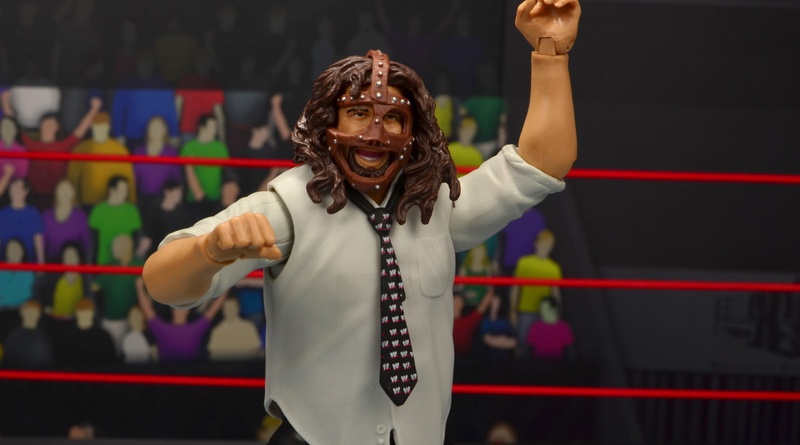 One of the ongoing trends in the constantly revised WWE account of history is that Triple H was a key player in the foundation of the Attitude Era. But if I’m making a Mount Rushmore of the definitive era of the WWE, it’s Stone Cold Steve Austin, The Rock, Vince McMahon and Mankind. It was Mick Foley’s alter ego that created some of the most iconic moments in wrestling history — not Triple H.

In what’s best described as a fluke that would be hard to replicate, my Elite 17 Mankind fell off my display and managed to land in the specific spot to snap his leg peg. It was so unbelievable that I couldn’t even chalk it up to shoddy Mattel construction. But I was very happy when Mattel released a new Mankind finally as part of its SummerSlam series. There weren’t many surprises with this figure and some of my earlier issues still hold up. But since I wasn’t reviewing figures back with Elite 17, this gives me a chance to share my thoughts on this one.

Package:  It’s so odd to me how much I’ve come to hate the standard Elite package color scheme, but love any variant. The SummerSlam series just works in a blue and orange mix, but it totally pops. The bio is barely worth mentioning though. Typically with these specialized packages, Mattel adds a little extra or even does an actual write-up. This is the regular Elite package with a larger picture. 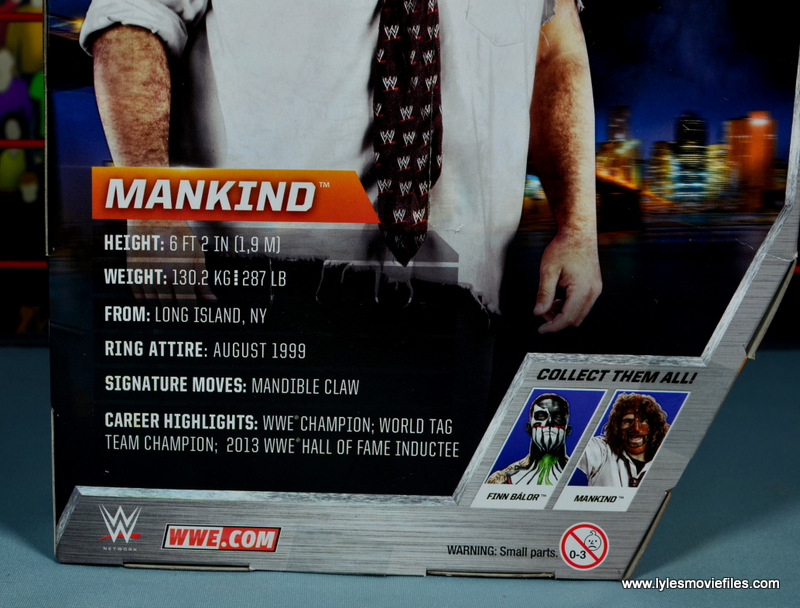 Likeness: The head sculpt is pretty great. Mattel didn’t need to change it up because they got it right the first time. The detailed mask is a separate piece, which was the smart way to go here. You can lift it up slightly to reveal Mankind’s smile a bit more. 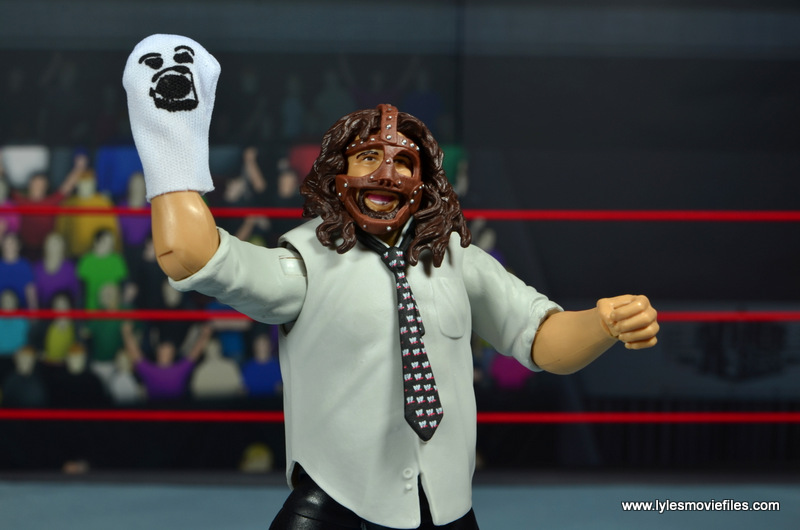 The shirt could stand to have a lot more wrinkles and grime on it. Mankind wasn’t going to the dry cleaners after every Raw. This is a bit too clean for the former hardcore champion.

But the biggest issue with the figure is the size — or the lack thereof. Mankind was not a small, slim guy. To absorb all the punishment in the ring, Foley couldn’t be a slender guy and had some heft to him. All around from the torso and especially below the waist as Mankind was bottom heavy should be bigger. This makes Mankind look smaller than he should compared to figures like The Rock or Kane. 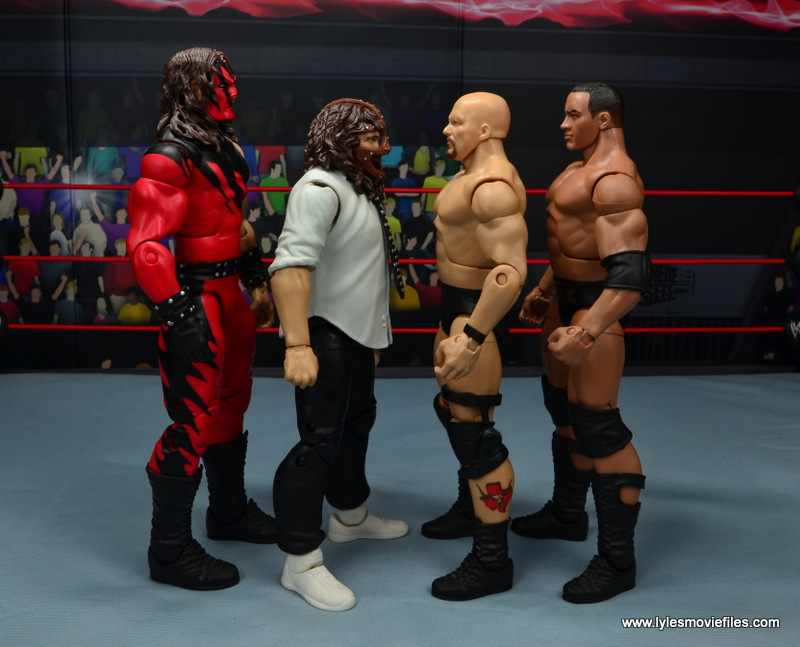 Scale:  Mankind wasn’t a giant and stood 6’3″. That’s shorter than his Rock n Sock Connection partner by two inches. Mankind is an inch taller than Stone Cold. I tend to give Mattel some leeway with an inch or two so Mankind and Austin are about the same height. Both have to look up at The Rock however. 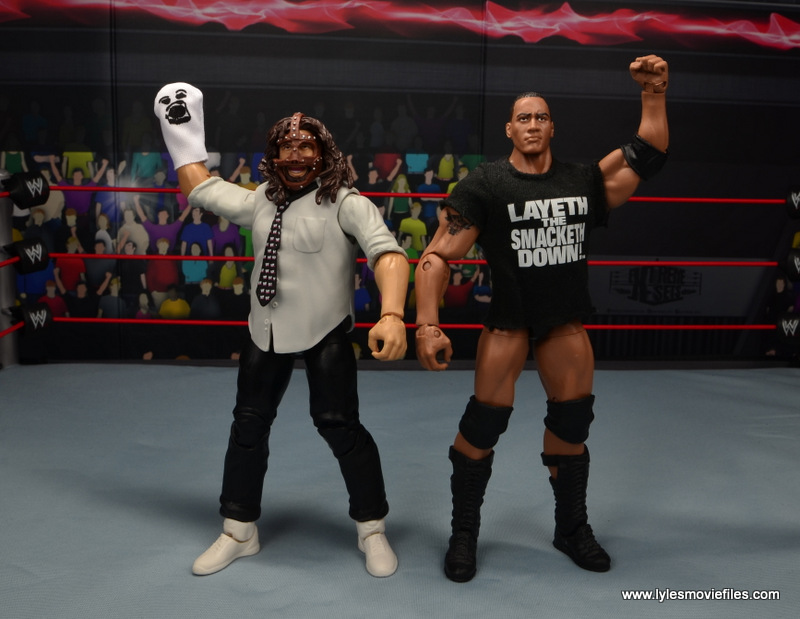 This could be fixed by addressing another issue — Mankind’s lack of a neck. He hunched over a lot so I could see Mattel’s thinking here, but he needs some of it visible. Maybe the tissue in the neck peg trick would work here.

Paint: To change from the original release a little, Mattel darkened Mankind’s hair. The first figure had light hair and a dark goatee. Now everything matches up.

I like the dark hair better as it makes the mask stand out better. Also, Mankind has a WWF style tie. He mixed those up often enough it doesn’t matter and it gives him a more distinct look. Beyond that, there’s not a lot of paint intensive work here. 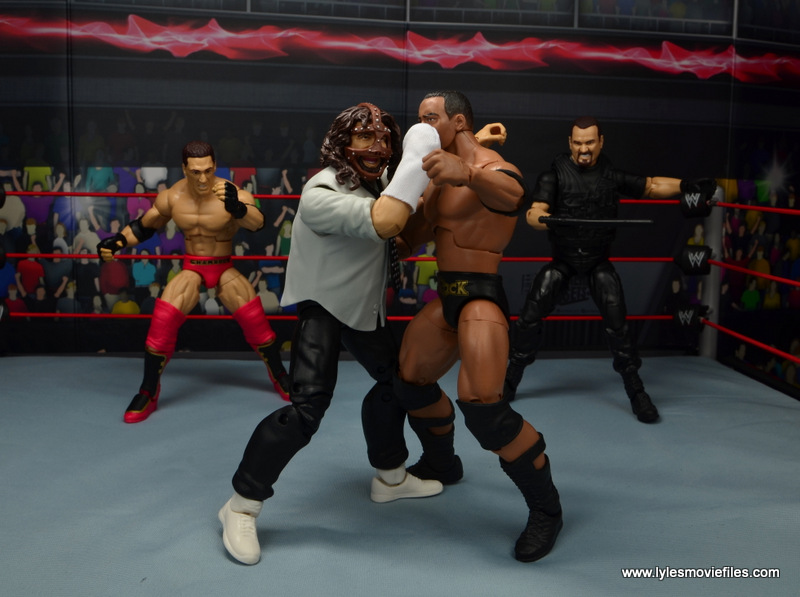 Articulation:  Even with the fold over shirt, Mattel provided enough room to use the torso and waist articulation. I didn’t necessarily consider that a given. Mattel didn’t add in a bicep swivel, which becomes an annoyance the more I posed him. The elbow joint is pretty standard even with the roll-up sleeve. From the waist down, the articulation is back to normal for the most part. The missing boot swivel isn’t necessary for him. 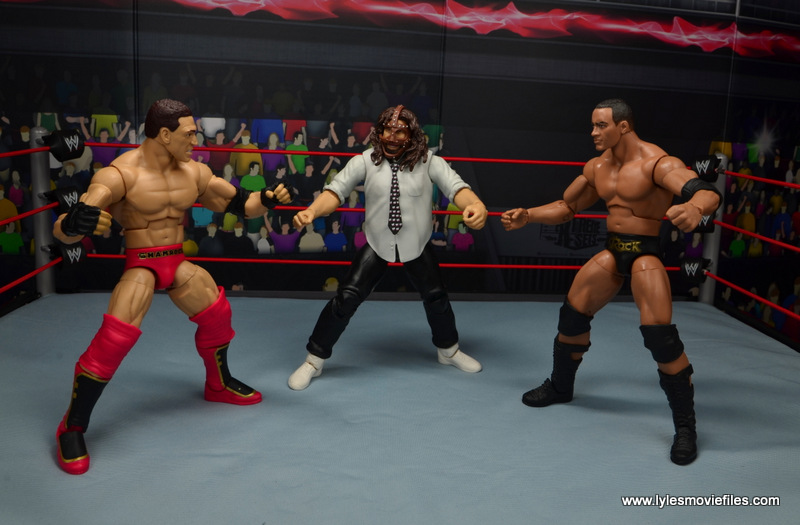 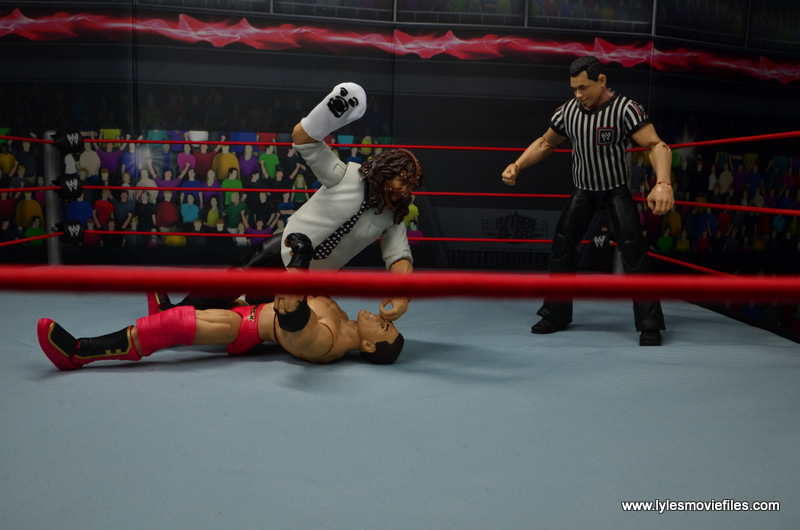 Accessories:  Mankind only needed one accessory — Mr. Socko. Fortunately, it’s cloth and as simple and basic as needed. It fits over Mankind’s hand with no problem and is snug enough it won’t fall off the second you move him. That’s also not a given and I appreciate that a lot. 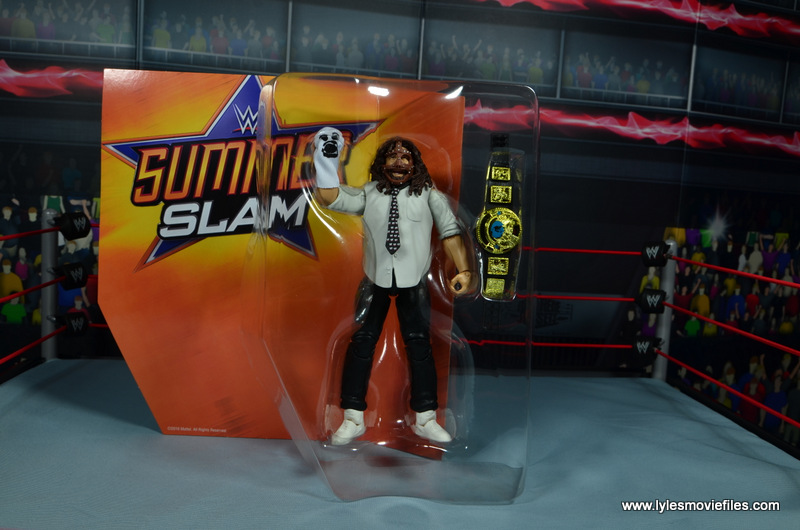 Mankind also comes with the WWF world title from when he beat Triple H and Stone Cold in a three way match. This is fully accurate to their SummerSlam 1999 match, but I really want a Mattel version of the hardcore title. Unless Hardcore Holly is coming soon, Mankind was the best chance for it. But again, I can’t complain because something is accurate. The belt is nice and shiny with a leather like material to capture the title feel. No issues there.

Worth it?  Since I desperately needed a Mankind figure and didn’t want to pay the exorbitant secondary market prices for him, I was happy to get him for $20. Your mileage may vary here, but it’s the standard Elite price.

My earlier issues carried over here — specifically the lack of bulk and the missing bicep swivel. Otherwise, this is a good figure of one of the Attitude Era’s main players. 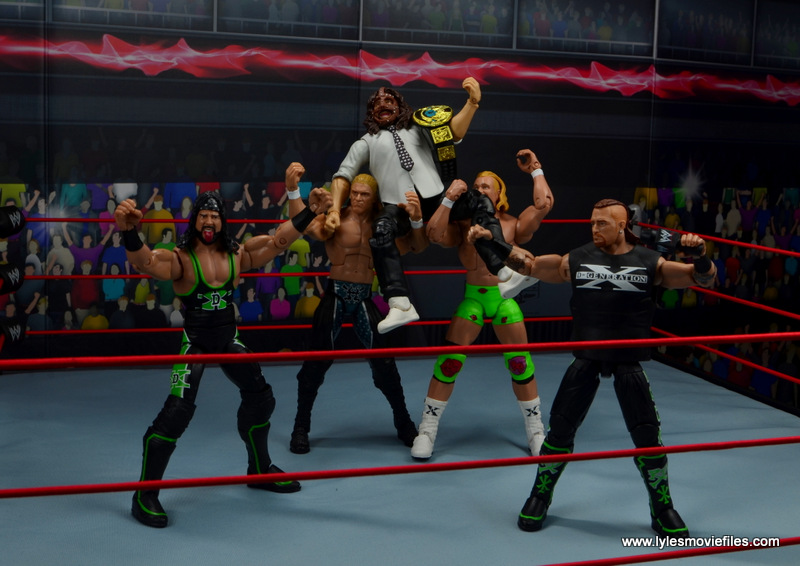 Where to Get It? Catch the right Toys R Us and you can find him in stock.  Amazon.com looks to have him over retail price right now.