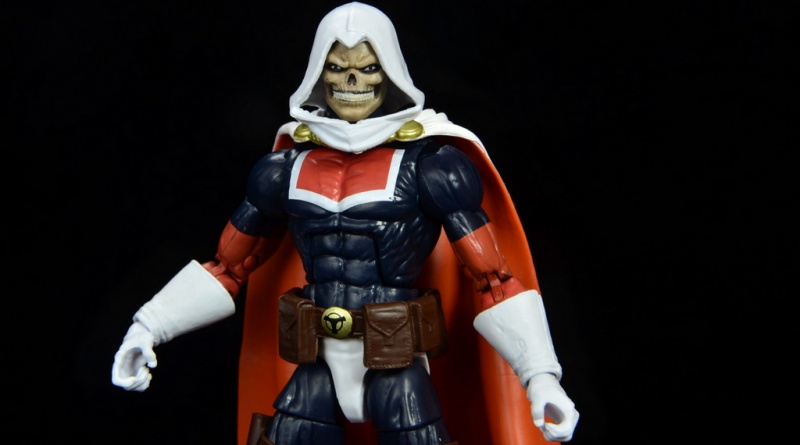 Has there been a better time to be a Marvel fan? Between Black Panther, Jessica Jones, the Avengers: Infinity War countdown, there’s a ton of reasons to be excited. And that doesn’t even include the plethora of new figures. My big want for the first Marvel Legends Infinity War wave was unquestionably Taskmaster.

Hasbro previously released him in a more modern attire. I liked the figure well enough, but really wanted one worthy of replacing my old Toy Biz figure. Mission accomplished with this figure. With Hasbro, it really is becoming a matter of just being patient and eventually all of your wish list items will eventually be covered.

Packaging:  Hasbro previously used purple for the Guardians of the Galaxy waves so Infinity War gets purple with a light orange accent. I love the effect as much as I do Hasbro’s color theme waves. The purple is nice and striking and really stands out even against other Marvel Legends waves on the stands. 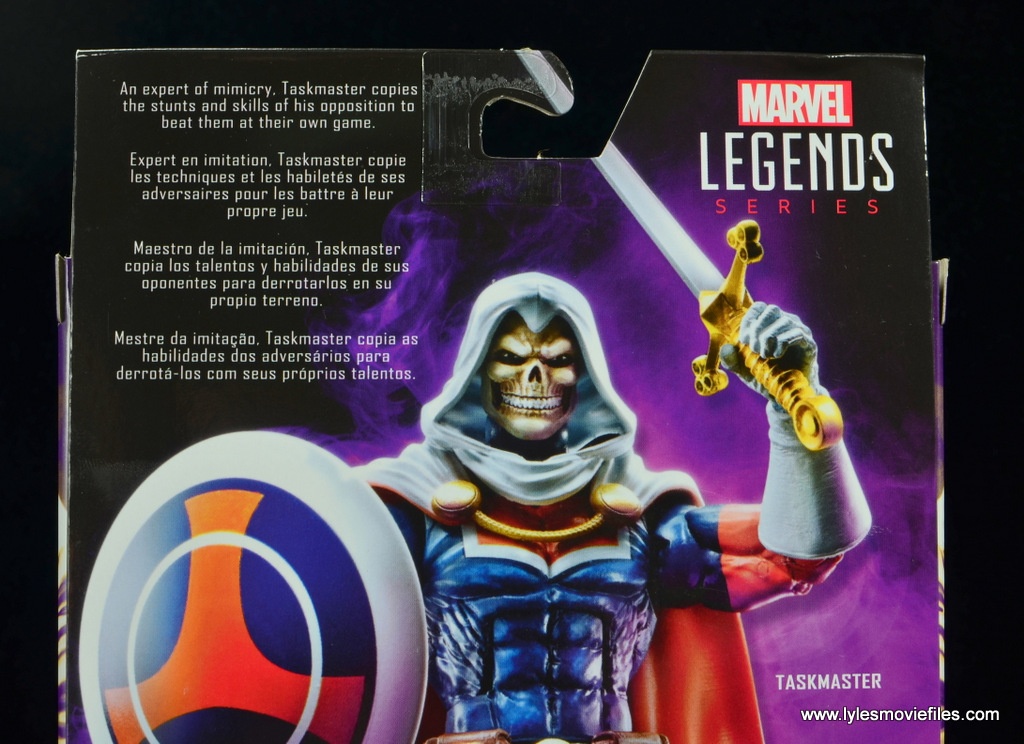 Taskmaster has a nice big portrait on the side and the usual too abbreviated bio. Oddly, the picture of the figure on the back doesn’t look as nice as the figure itself. That’s a weird deal that’s happened a lot with the line as of late. I definitely prefer the figure looking better than the picture though. 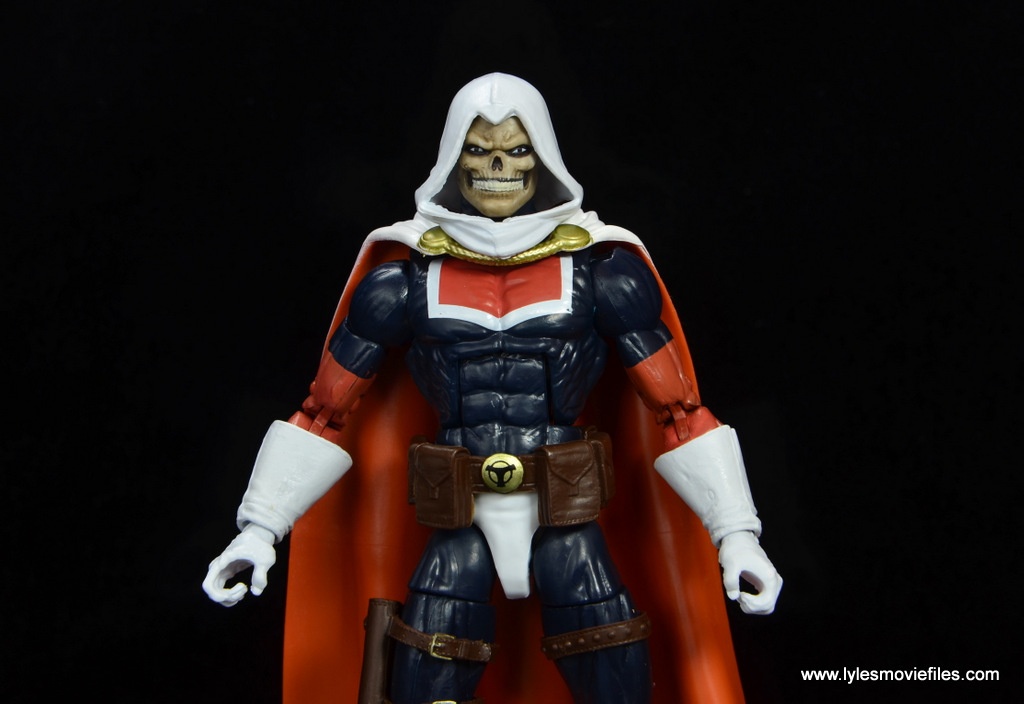 Likeness: Taskmaster easily has one of the busiest outfits in classic Marvel costumes. There’s a lot of pieces from the creepy looking skull mask, hooded cape, flared gloves and boots, pouches and holsters. This hood setup looks like it would be perfect for a future Dr. Doom figure. 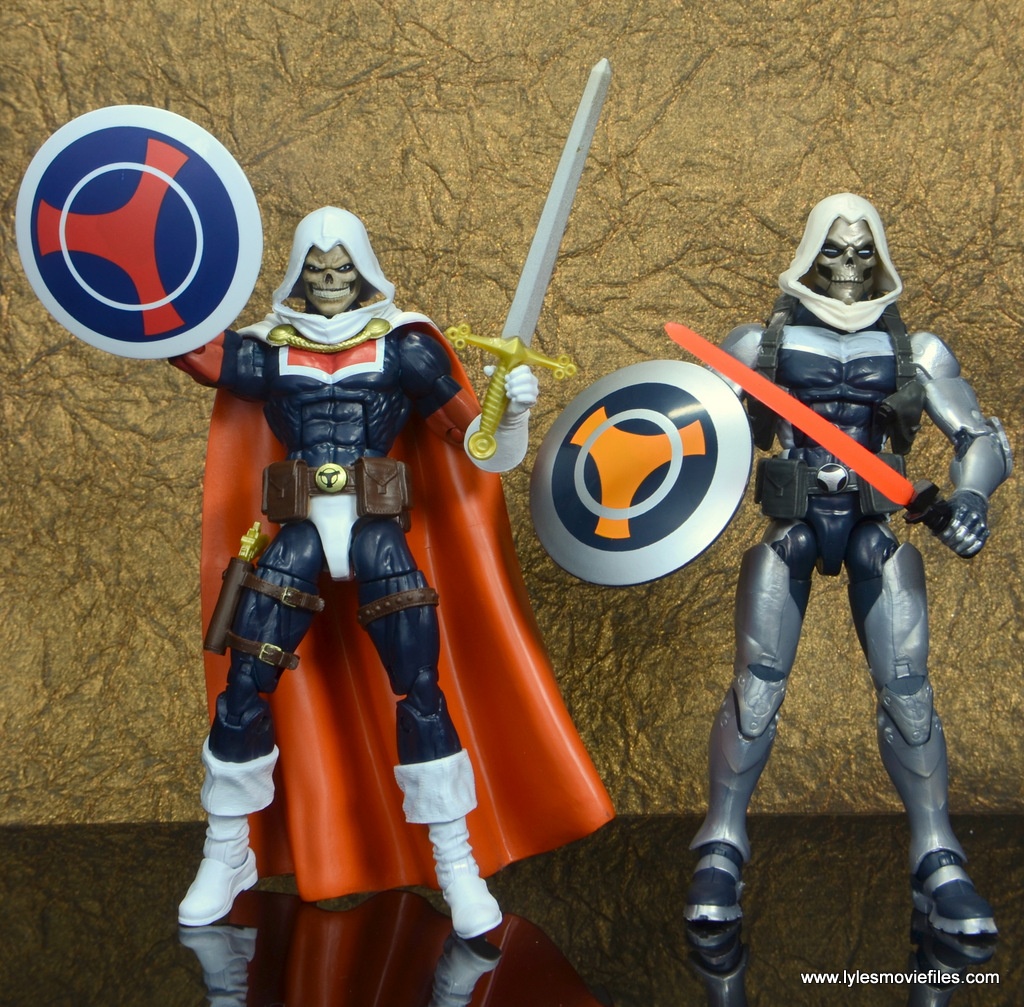 While a lot comes down to the paint execution, the sculpting is fantastic. The skull head really looks sinister and intimidating. I imagine a lot of customs using this head. Everything comes together very nicely without any random falling bits and loose elements. This is exactly how I envisioned this figure and Hasbro pulled it off amazingly. 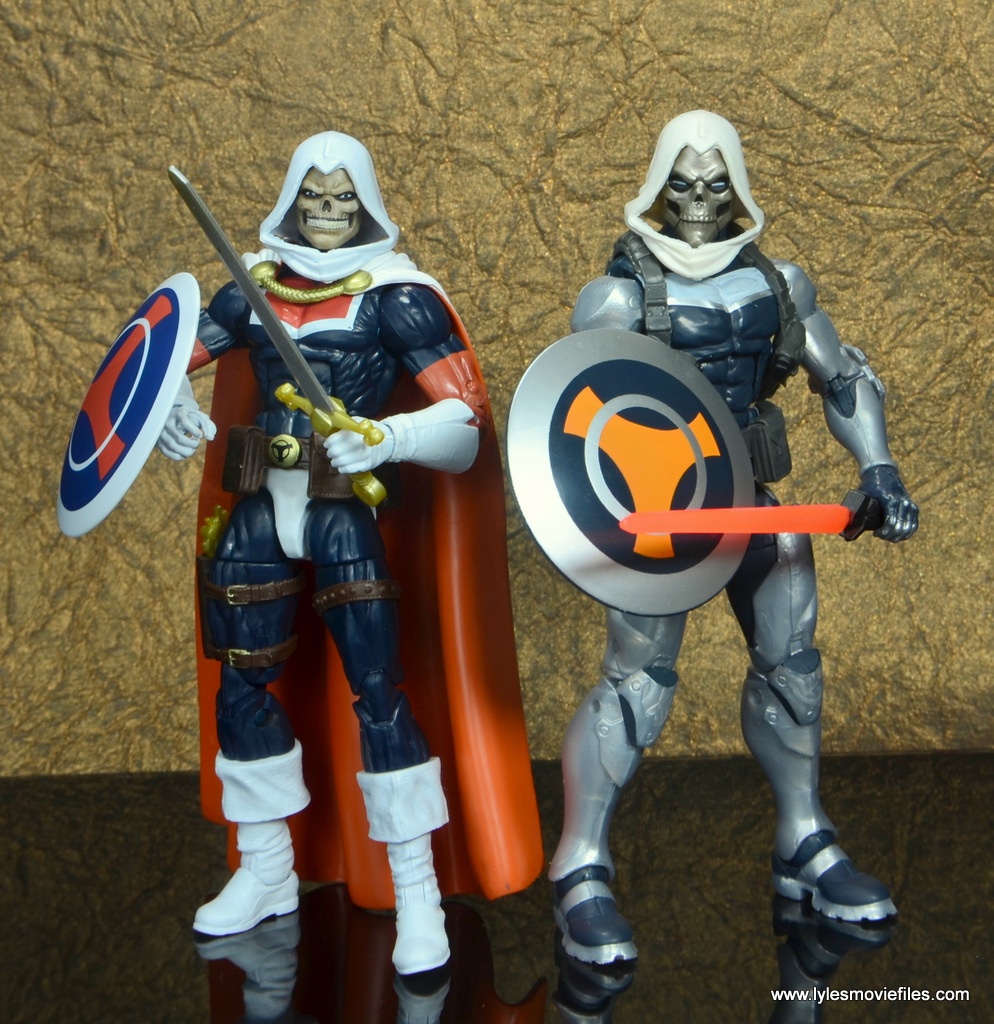 Scale:  Taskmaster doesn’t need to be massive. He’s the kind of character that’s far more intimidating because he’s not built like a towering juggernaut. He’s about the same height as Captain America, but slighter and I appreciate the discrepancy in height and size Hasbro is providing now. 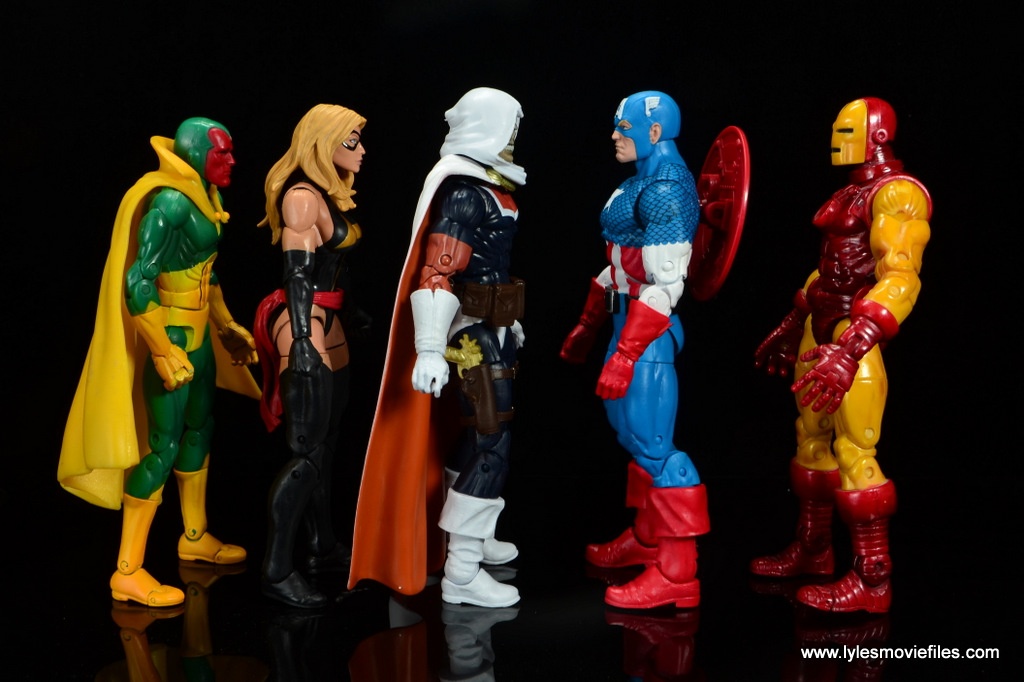 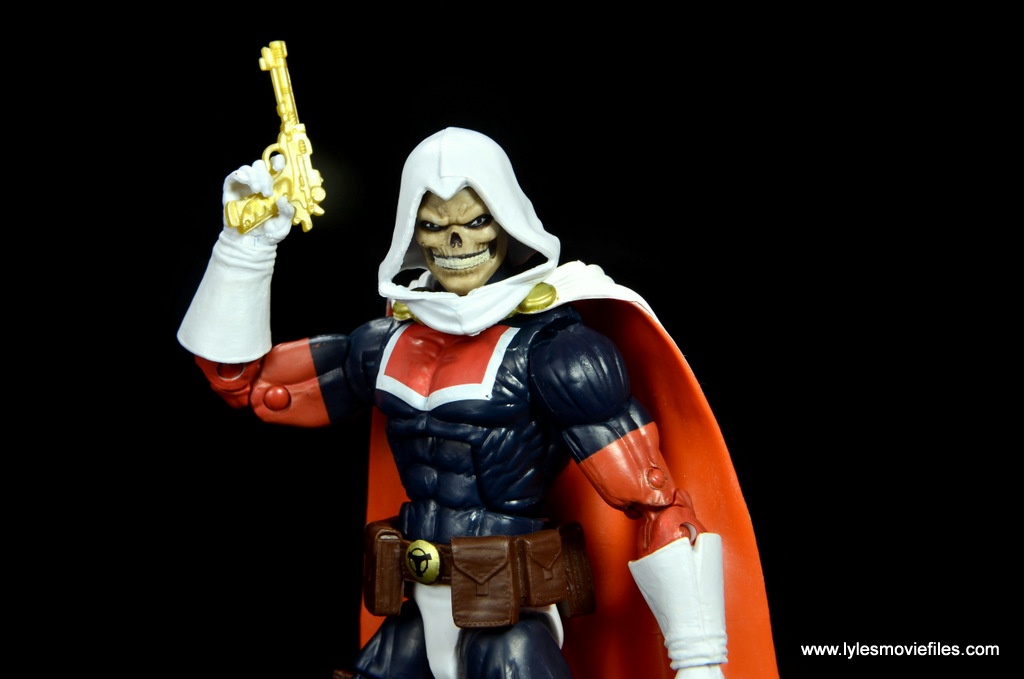 The white is nice and pure without a lot of bleed and fading. It looks like Hasbro wisely went with white molded plastic for the gloves, boots, capes and trunks. That was definitely the smart play as it makes the white look strong.

Look closely at the skull teeth and mask, you’ll see some slop, but otherwise the paintwork is really good for this scale. Unlike the classic portrayal, the eyes aren’t shaded so it’s all white. And yes, I am somewhat considering getting a second figure to try that look out.

Next up is the dark blue outfit, which again looks to be the plastic molded in that color. The orange sleeves are painted, but came off well and the chest logo also came out pretty solid though you can see the white not fully taking there. 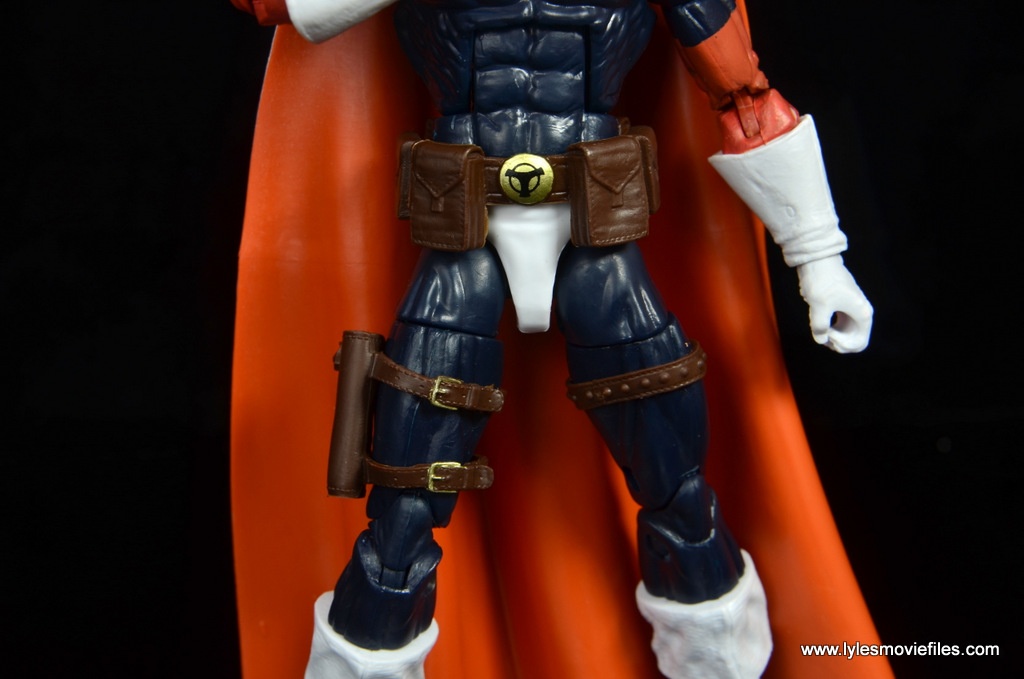 The brown holster and pouches lack a wash, but are painted in the shade that gives a leather like impression. Even the small details like the buckles are covered without any problem. 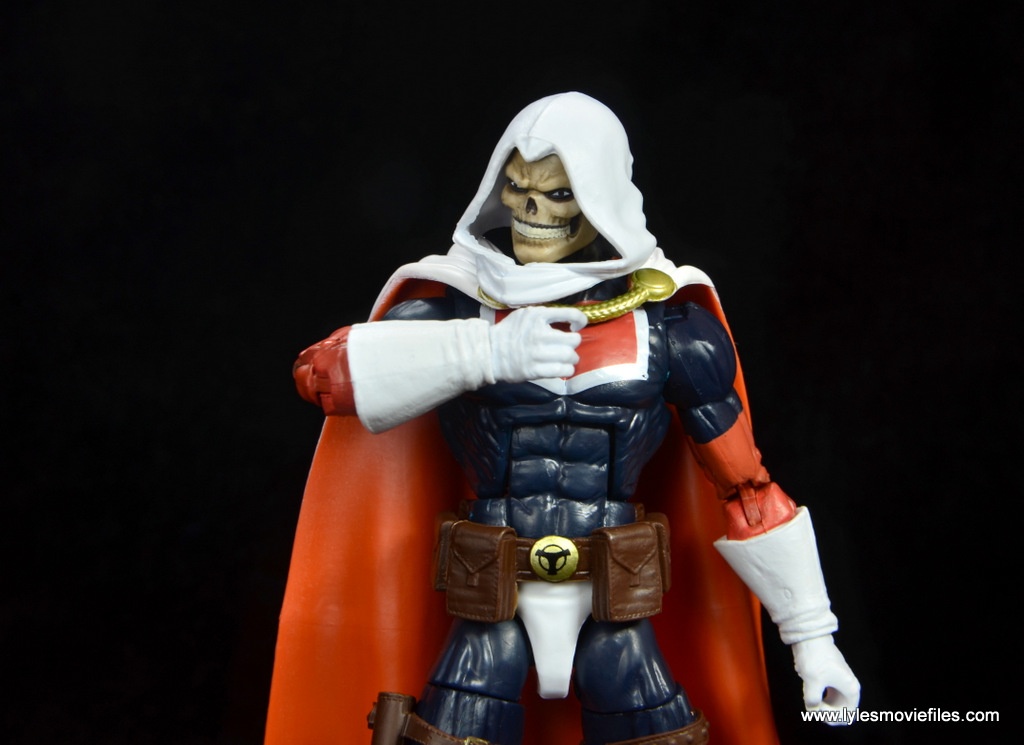 There’s some minor overspray on the gold clasp of the cape, but really this is a top notch paint job. 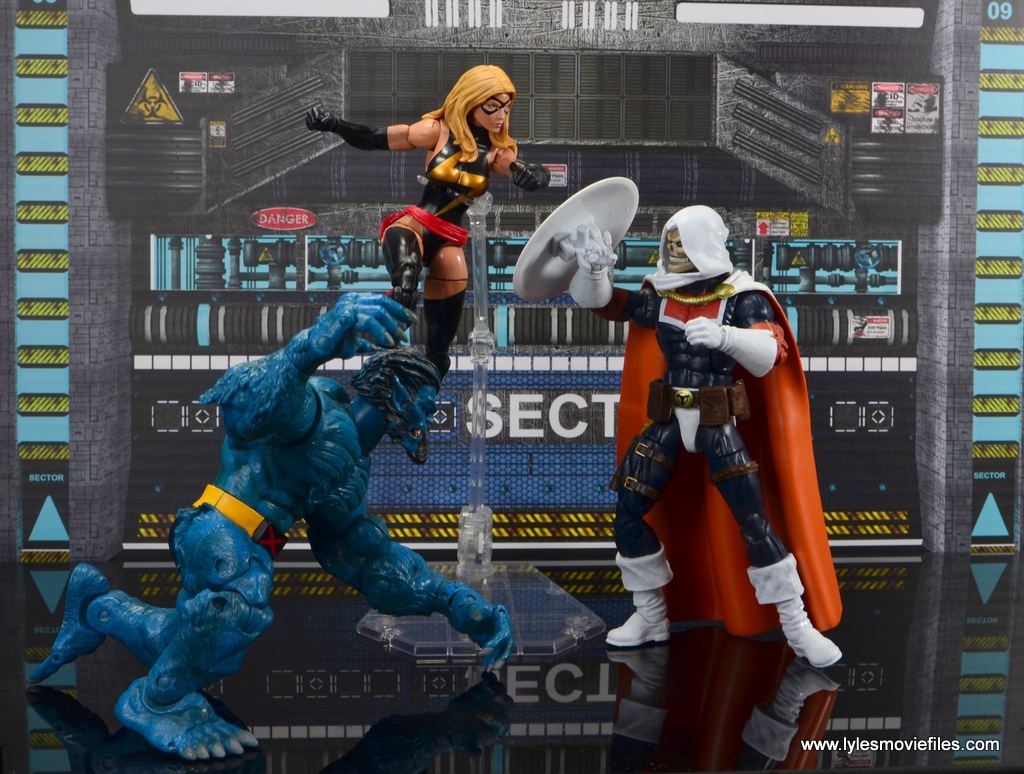 Articulation:  You know the deal with Marvel Legends and Taskmaster has a body that allows for some really creative articulation. The cape plugs into the hole in the back better than most of the caped figures (Lady Thor and Vision) allowing for more freedom with poses. 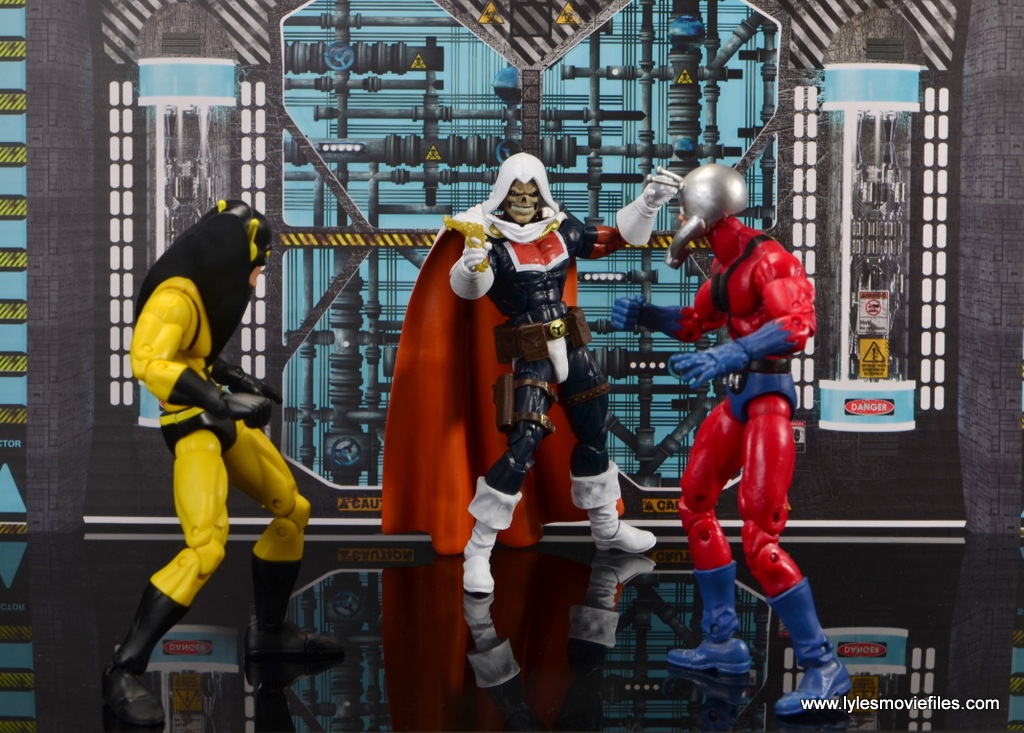 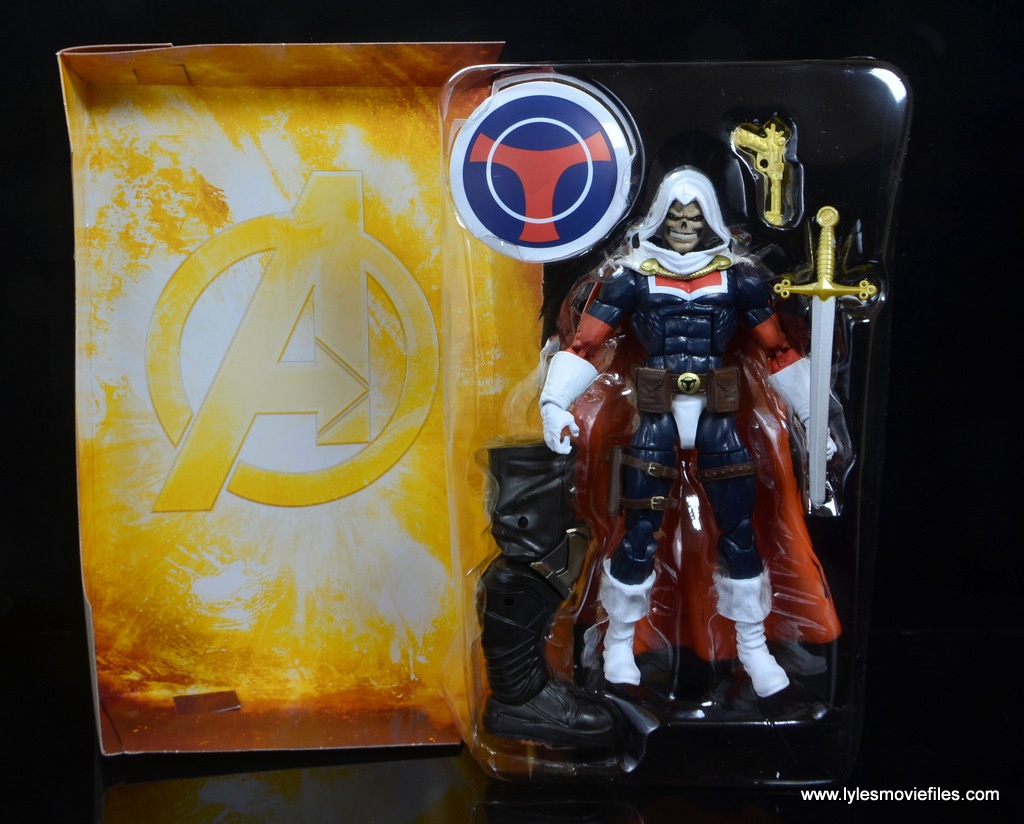 Accessories:  Taskmaster comes loaded. He’s got his sword with a gold handle and silver blade, his gold blaster and shield. We’ve seen the blaster a few times before and it works fine here although it does really look like a toy gun. 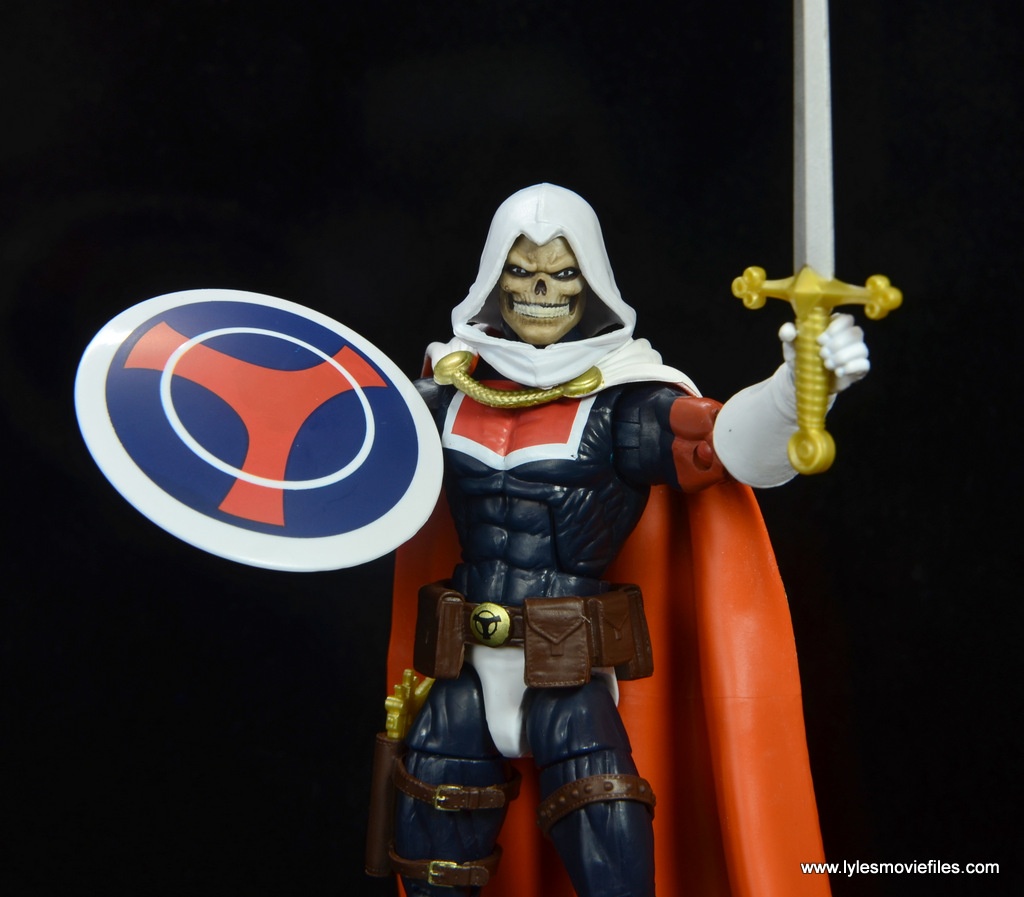 My favorite element is the big shield with the Taskmaster logo. It’s such an obnoxious design and I love it. The only missing piece is a scabbard for the sword. I guess you could just keep the sword in his hand, but I liked the ability to house all the gear — including the shield strap — as Toy Biz did with its version. 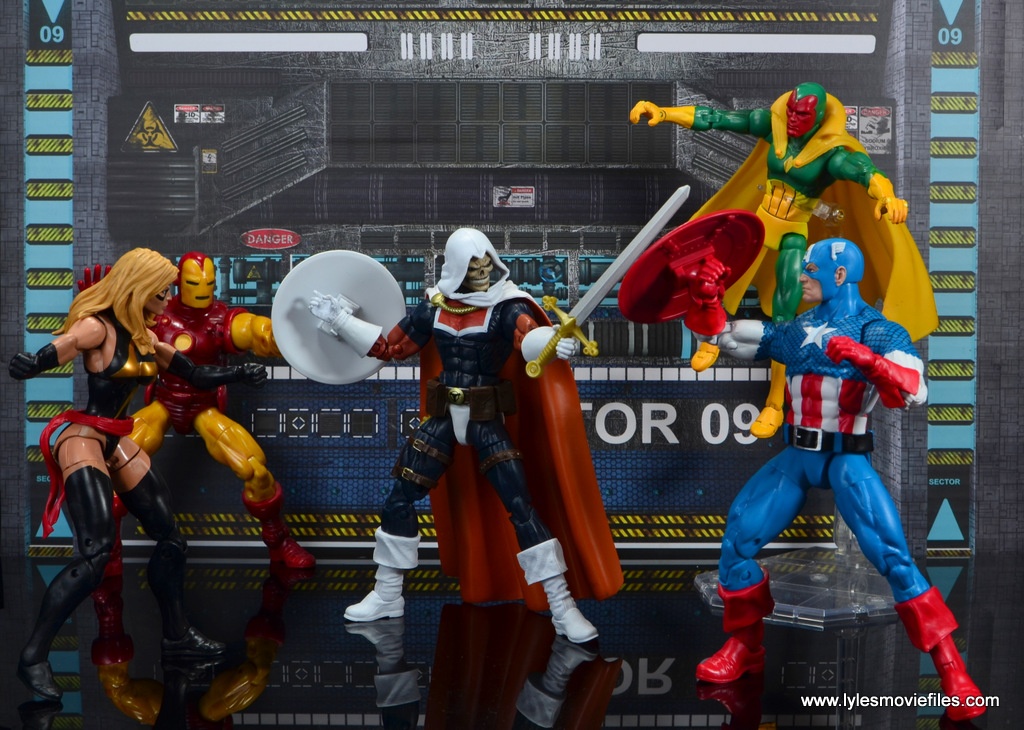 Worth it?  I grabbed Taskmaster for $18. That’s better than the normal $20 price tag and I suspect he’s going to be one of the in-demand figures from the set. Don’t wait for him to hit clearance prices. 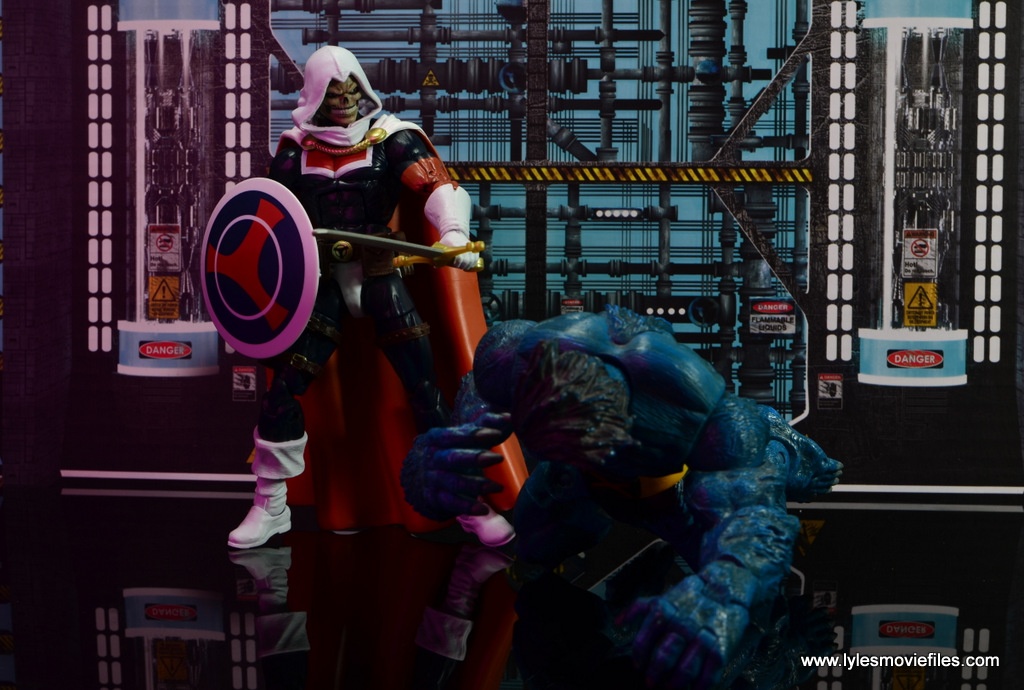 This is what I wanted from Hasbro all along. I don’t regret buying the earlier Taskmaster, but this figure will definitely have a prominent spot on my villains display. 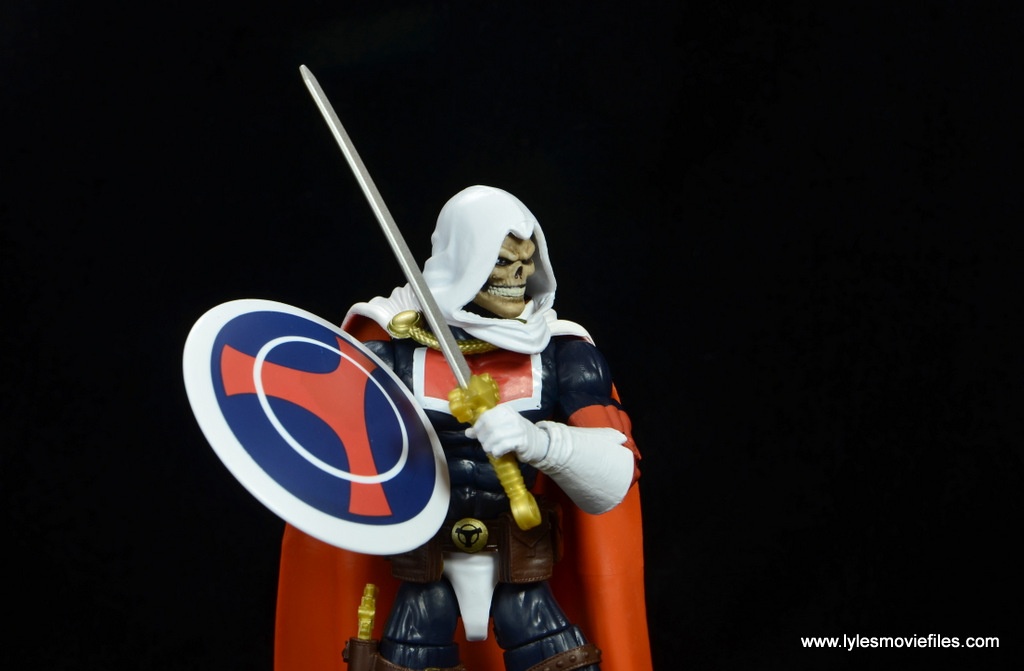 Where to get it?  I found the set at Wal-Mart, but as of now you should be able to find the Avengers: Infinity War wave at Toys R Us and Target as well as online retailers like Hasbrotoyshop or Amazon.com.