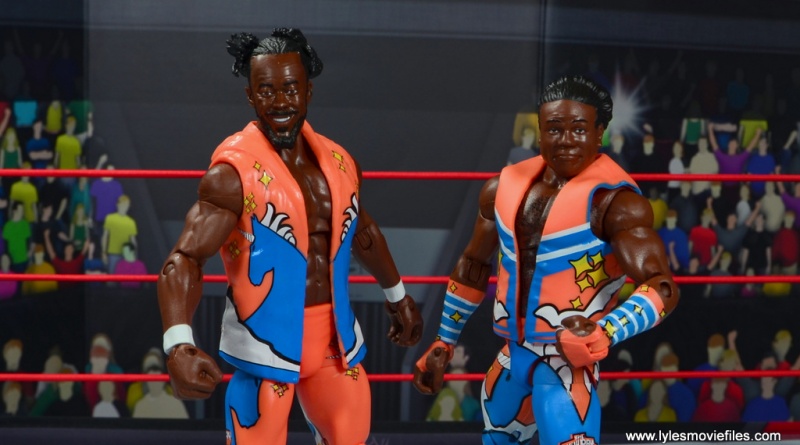 I’m amazed New Day has remained such a popular act. WWE never seems to stick with anything the fans enjoy for too long, but Kofi Kingston, Xavier Woods and Big E continue to be a pretty dominant force on SmackDown Live. Since Kofi and Xavier are part of the same wave, I figured I’d review them together. Big E will get his own review when I start getting the Elite 53 figures. I’m way too far behind to get more right now. So for now you get 2/3 of New Day. Let’s hope it’s a good one.

Package:  Just a few more series and I’ll be all done with this package set up. I probably would like this more if Mattel alternated the colors for the respective brands. The SmackDown Live blue would make this stand out a lot more.

The back of the package has the standard title reign breakdown and basic generic info. I’m looking forward to the new package set up.

Likeness:  Since I skipped the Booty-Os set I was a little disappointed that Mattel went back to the old Kofi headsculpt. It’s fine and accurate for his look, but odd considering the other New Day members have different head sculpts from the initial release.

This is the standard Kofi figure Mattel has used for a while with the updated horned sneaker boots. I appreciate Mattel making the dedicated sculpt for these as there’s no other figure that can use them. 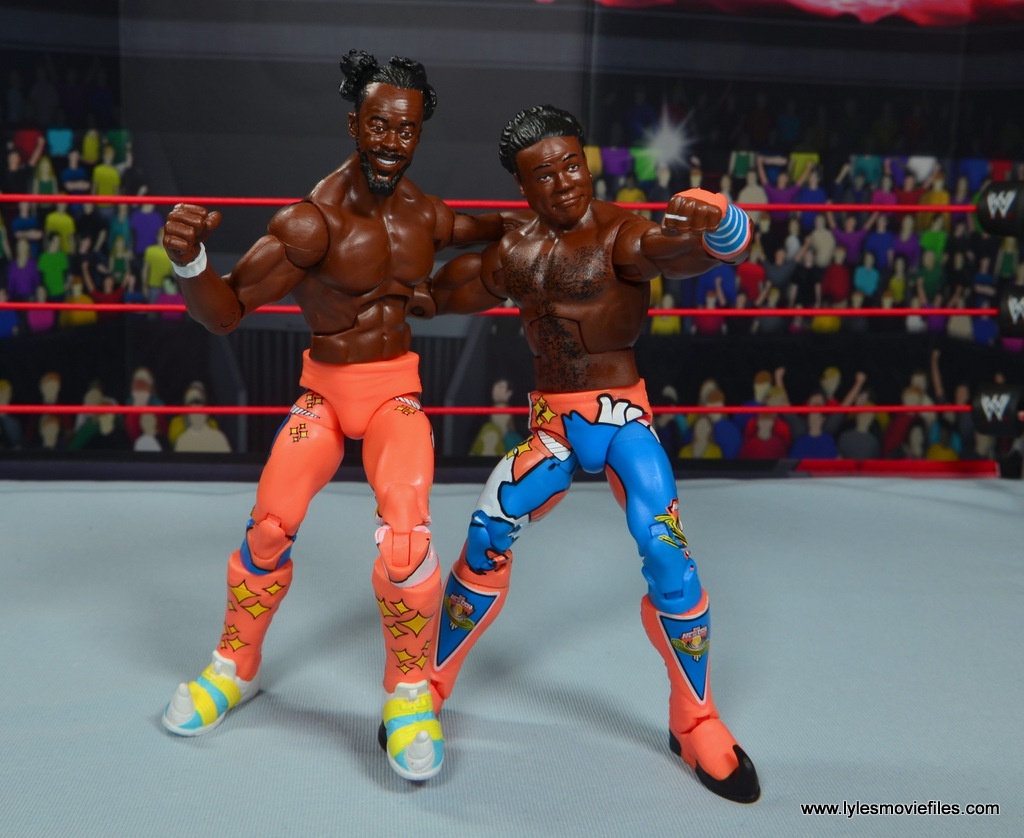 Xavier features a different head sculpt. It’s kinda goofy, but a very common Woods expression. Xavier changes his hairstyle frequently so I like this puffy ponytail version. Like Kofi, Xavier has uniquely sculpted horn tipped boots with the kick pad and laces in the back. Mattel must really like New Day to add all the various unique touches to their figures. 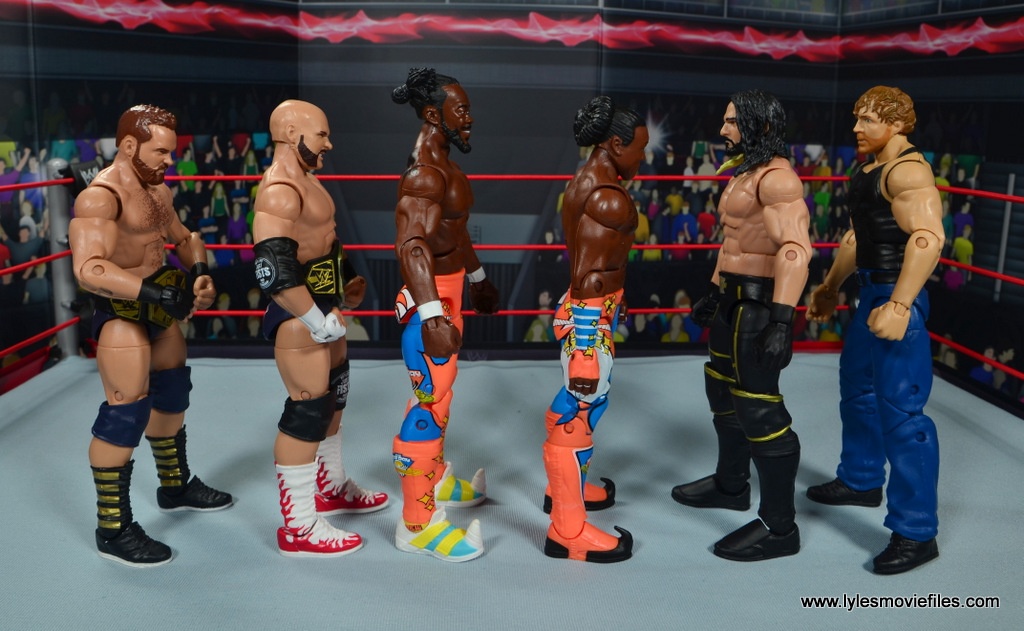 Scale:  Kofi is the tallest of the New Day at 6’0” just an inch above Xavier and Big E. They should all be looking up at most of the roster like the 6’1” Seth Rollins and 6’4” Dean Ambrose.  Xavier looks about 3″ shorter than Kofi making him look tiny. That’s the biggest complaint you’re going to get from me with Xavier though.

Paint:  This is the real selling point with this set. The earlier New Day figures featured more reserved colors, but the trio started rocking far more colorful attire as their popularity soared. The Elite 52 set features a color scheme that will definitely make New Day pop on your shelf. I’m glad I didn’t get the Booty-Os set as these more obnoxious colors are far more indicative of the New Day.

Given the complexity of the outfits, I cut Mattel slack and didn’t nitpick too much on smaller paint issues. Kofi has some paint coverage issues with the white of his left leg needing another coating as the orange is bleeding through.

I regret not getting to these guys earlier as Xavier would really warrant a nomination in Best Paint for 2017. He’s really outstanding and one of Mattel’s best jobs in the entire line. Everything from the finger tape, the tiny stars on the wristpad and logos look great. And he’s even got the hairy chest. 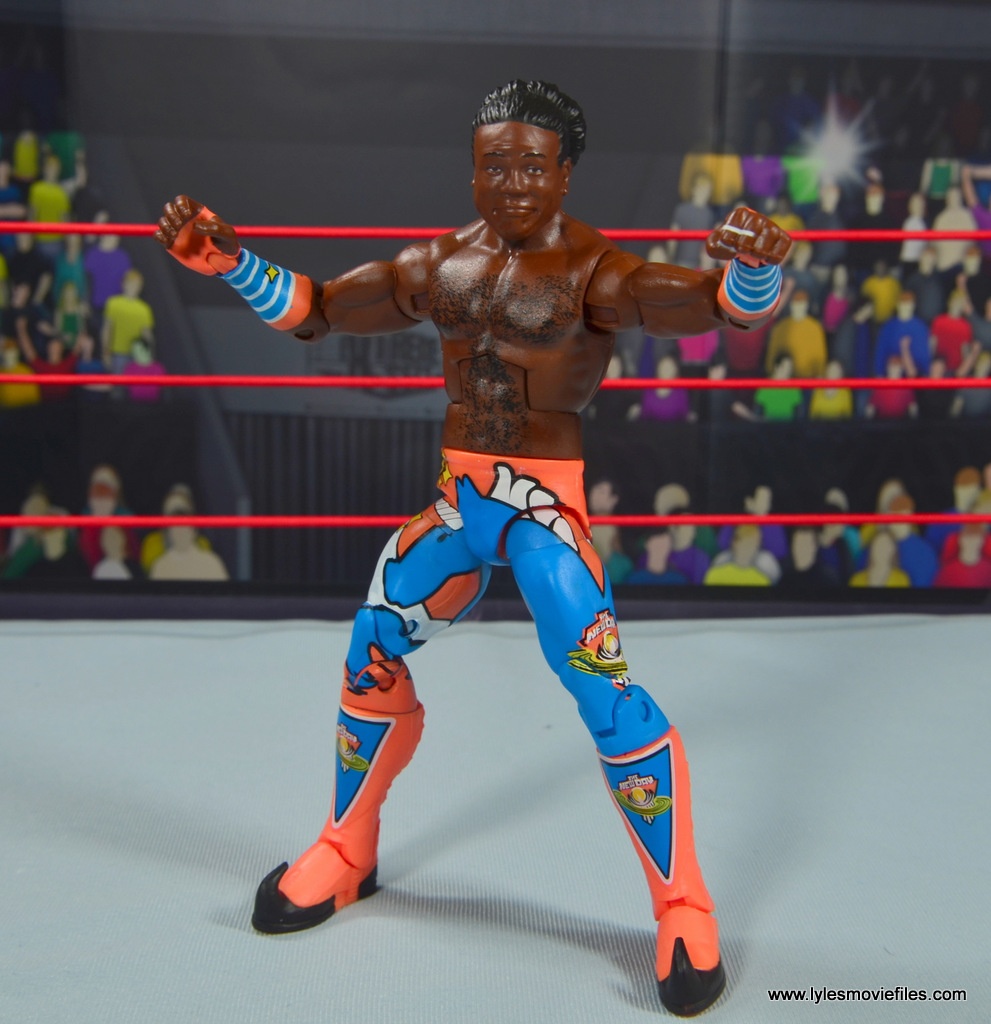 Articulation:  With the Elite articulation setup, there won’t be any problems simulating any of the New Day’s moves. While they have complex moves, they don’t use submission moves that need more range from the shoulders. 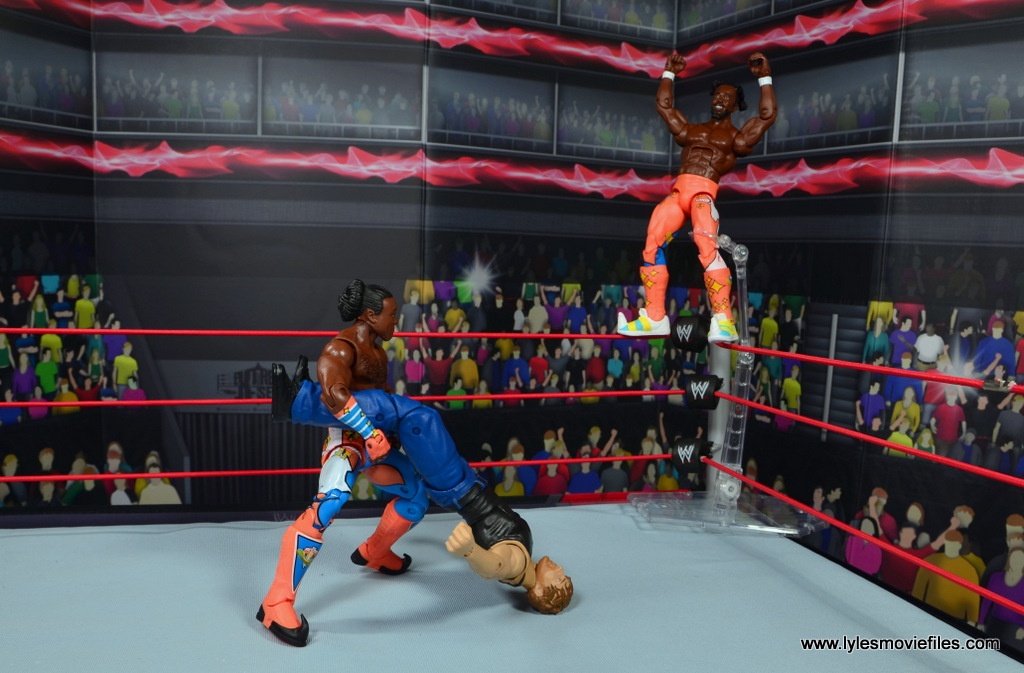 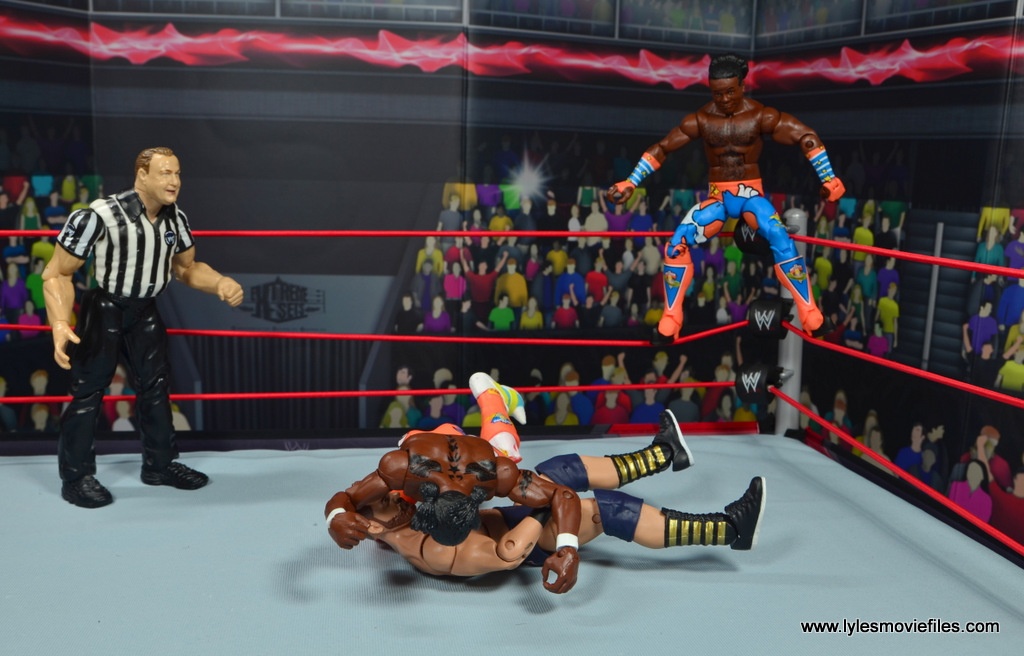 Kofi and Xavier have: 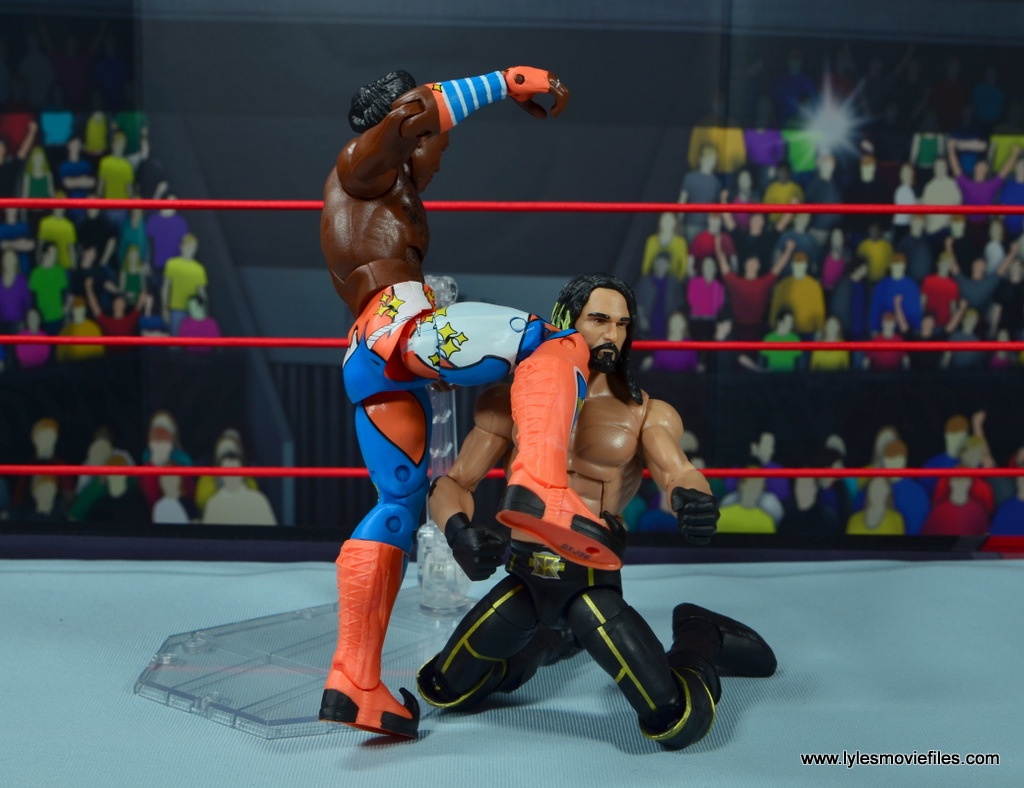 Accessories: Kofi comes with his vest. I always prefer these over the plastic shirts. The vests are never hard to remove and looks good. No paint issues there, which is important considering the intricate design. Additionally, Kofi gets his unicorn headband. 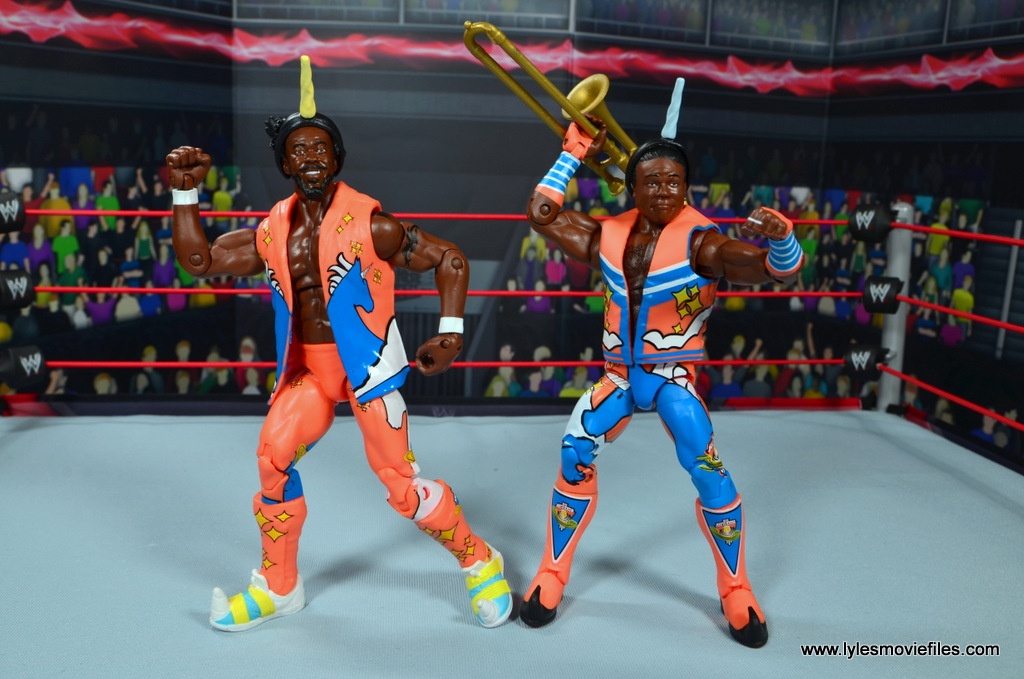 They fit nice and snug so there’s no problem with them falling off at the slightest movement. It’s kinda crazy how much stuff New Day has been able to get over from unicorn horns, cereal to pancakes.

Xavier has the unicorn horn headband, his trumpet Francesca II and the vest, which is different from Kofi’s as it lacks the hood. I like how Mattel has all the small details of New Day down. That’s encouraging as I always get on them for taking some questionable shortcuts with other figures. 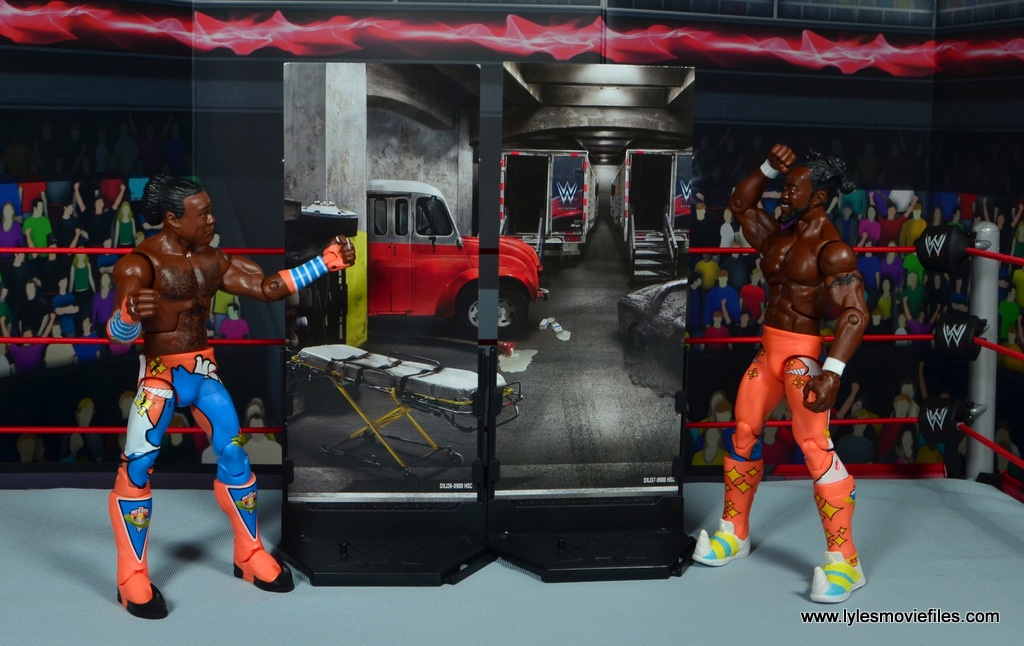 If I haven’t how much I hate the lame background stands that are also included, just imagine I’m complaining about them now.

Worth it?  During Christmas you couldn’t avoid a great deal for these guys. Kofi and Xavier were under $10 for most of December. Now they’re still below retail at $15. For new figures that’s a great price. I wouldn’t necessarily count on them sticking around til this December to get cheaper so this might be a good time to get them. 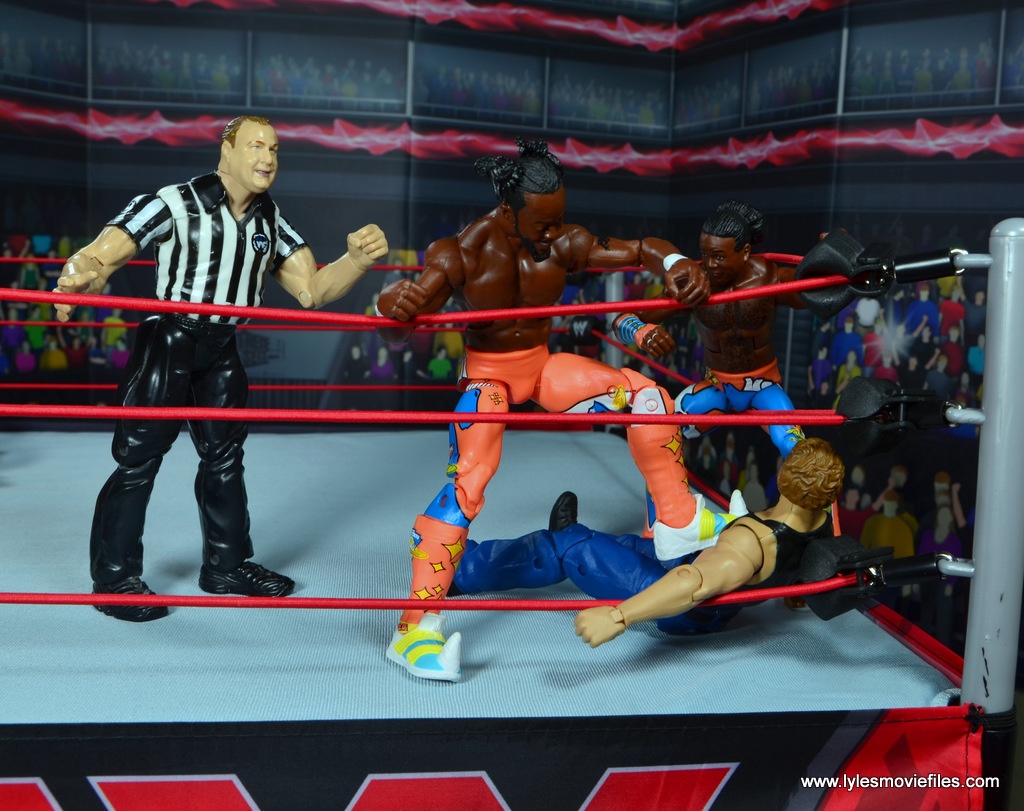 Xavier really impressed me despite being a bit short. Kofi is also pretty good though I’m not sure if Mattel has made a definitive New Day era head sculpt. These colors really pop on the shelf and I’m glad I got this version of New Day 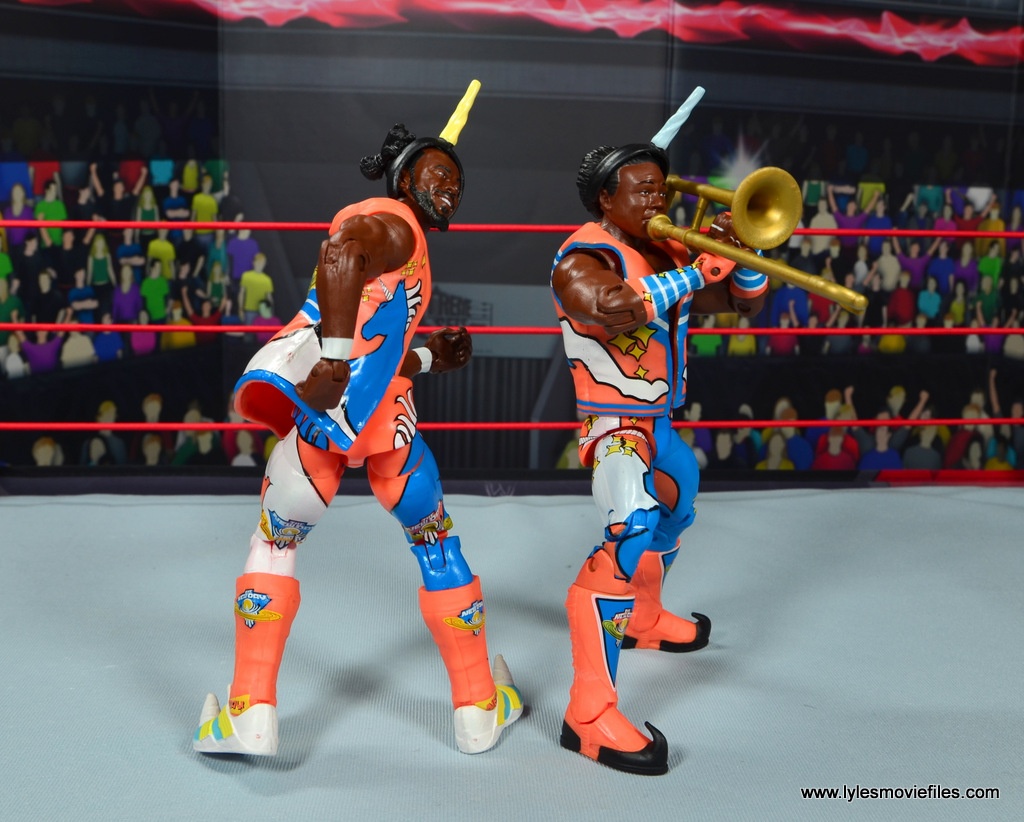 Where to Get It? FYE seems to be the only store I’ve seen that has this set in stock. It appears retailers just skipped this to move on to later waves. You can grab them from Amazon.com.