Ready Player One finally gives moviegoers a reason to go to the theaters besides seeing Black Panther for the 10th time. And it will prove nearly as epic and spellbinding for its target demographic of devoted video game and pop culture fans.

For viewers who will immediately start fanboying/fangirling out at the sight of Battletoads or Arkham Knight, Ready Player One has the cheat code to your heart. No DLC necessary.

It’s 2045 and the world doesn’t look too far off from life in 2018. People are more and more connected online and focusing less time in the real world. The new social obsession is The Oasis, a virtual world where the possibilities are endless.

Wade Watts (Tye Sheridan, X-Men: Apocalypse) escapes from the doldrums of life to play in The Oasis as Parzival. Whether racing with his pal, Aech (Lena Waithe, Master of None), or battling hordes on Planet Doom, Wade is fully connected.

Upon his death, Oasis creator Haliday (Mark Rylance, Bridge of Spies) kickstarted a massive quest. Whoever finds the three keys he’s tucked away will uncover his Easter Egg and control the Oasis. The years fade with no one even managing to find one key. As they tend to, a money-grubbing corporation, IOI and its head of operations, Nolan Sorrento (Ben Mendelsohn, Rogue One), stacked the decks with its elite squad of players trained to find the keys. 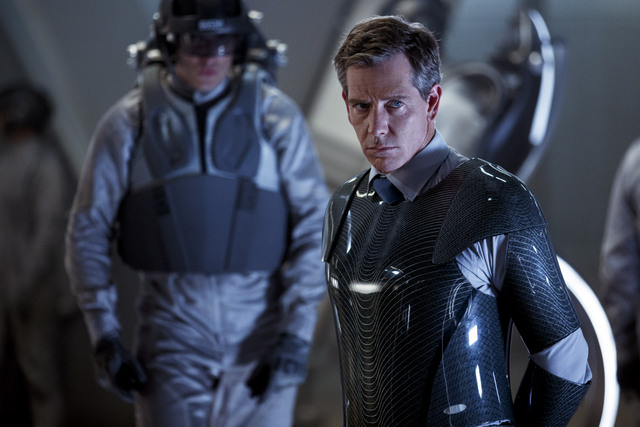 Ernest Cline co-wrote the adapted screenplay of his 2011 novel with Zak Penn (The Avengers). Licensing issues made some changes from the novel necessary, but the overall tone of the source material is intact. And a complete blast.

Director Steven Spielberg seemed inspired by this project as he completely embraces the possibilities of a virtual world. It’d be dead wrong to suggest Spielberg has lost a step, but Ready Player One felt like a throwback to his earlier days when he pushed the limitations of daring adventure films that kept a smile on audiences’ faces.

The visual effects are astonishing with unique character designs and gorgeous animation. Given the massive scope of the film, IMAX viewing is a must. Though if money isn’t an option, IMAX 3D is probably the best way to go. Regardless of which way you decide to see it, this is a film that has to be experienced on the big screen to fully appreciate.

Merging of pop culture worlds has been done before. Who Framed Roger Rabbit had a slew of memorable worlds colliding moments. Wreck-it-Ralph featured some fun scenes with various video game characters, but hardly on this scale. Obsessive pop culture fans will need to see this multiple times to catch all the references and Easter Eggs.

With so many recognizable characters present, it’s just a little disappointing Walt Disney didn’t play along to allow Mickey Mouse, Pixar, Star Wars or Marvel Studios characters to take part in the fun too. But it wouldn’t have been much of a contest if Darth Vader entered the Oasis, right?

Despite its run time of two hours and 20 minutes, the film manages to avoid overstaying its welcome. Recognizing the attraction of The Oasis for viewers, Spielberg keeps the real world scenes short and heavy on suspenseful action.

Mendelsohn is so great at playing the bullying corporate stooge and is outstanding. Sheridan steps up nicely in the lead role and Cooke, Waite and John-Kamen provide very solid supporting performances.

Ready Player One is worth the hype and is definitely one of the appointment films worth seeing so far in 2018.