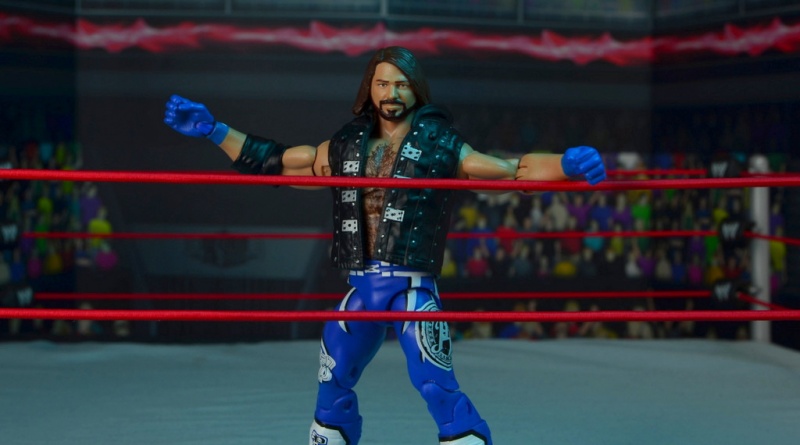 AJ Styles isn’t just my favorite wrestler of this generation, but is making a strong case to be right behind Sting and Bret Hart as my all-time favorite. That means Mattel is going to sucker me into buying a ton of AJ figures. The latest is the Elite 56 version with AJ in his blue attire from his first run as SmackDown Live champ. Let’s break it down.

Packaging:  It hasn’t taken long for me to run out of things to say about this new packaging. Simply put — I’m a fan, like the white with black and red accents and the figure presentation. I do think the Build A Display is way too prominent as opposed to what’s included with the figure as the dull blue Includes at the top left is too hard to make out from a distance. 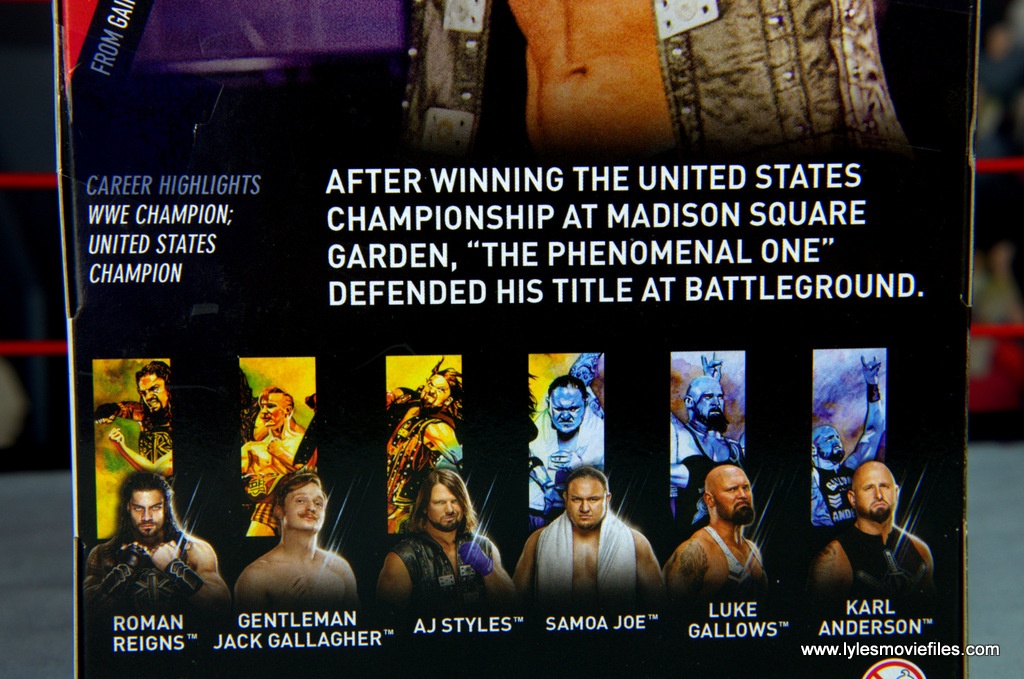 I like the stat line that’s placed diagonal to a pic of Styles. I really think Mattel needs to have more pictures of the figures in the line though since the lure is them not the artwork. 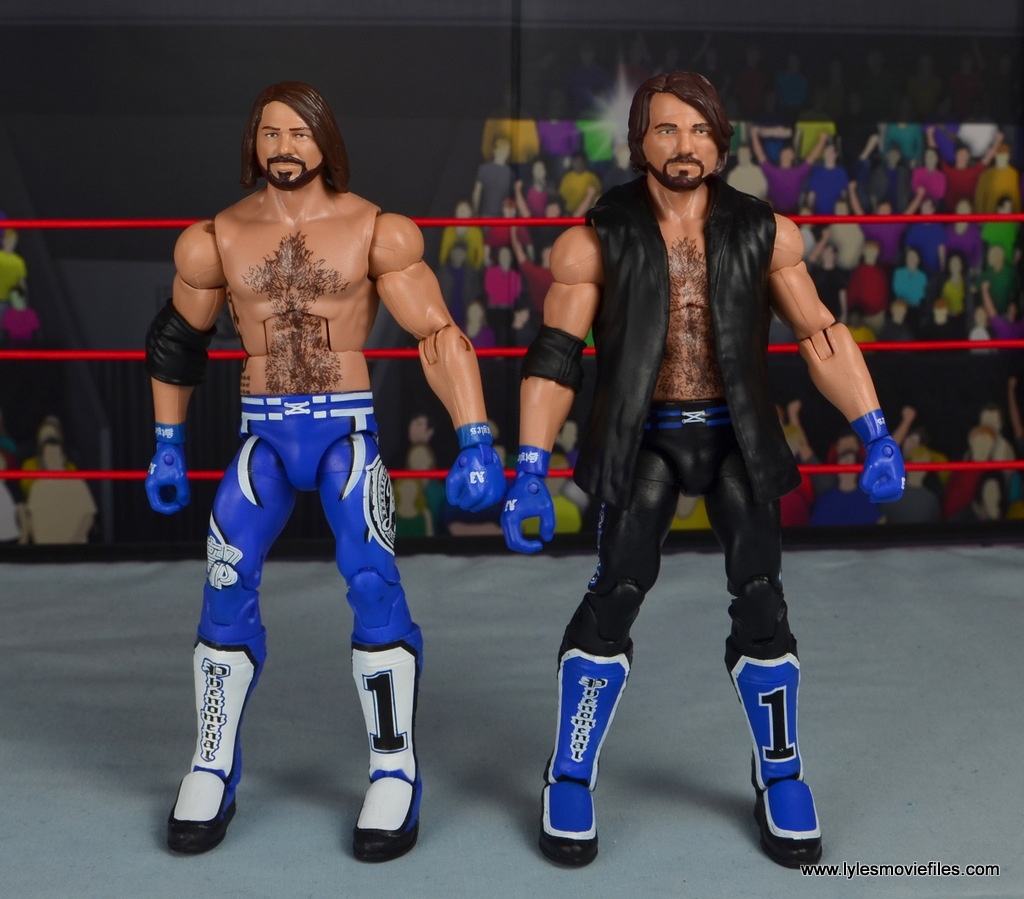 Likeness:  This head sculpt is a big improvement over the first one. I wish it had a bit more personality like a cocky smirk, but otherwise it’s great. That’s the main difference from this figure and the other AJ figures Mattel has cranked out.

In fairness, Mattel pretty much cracked the code right away on AJ’s look. With Mattel finally incorporating multiple heads and hands into the regular line, I’m expecting a hands clasped version very soon so we can get his signature pose. 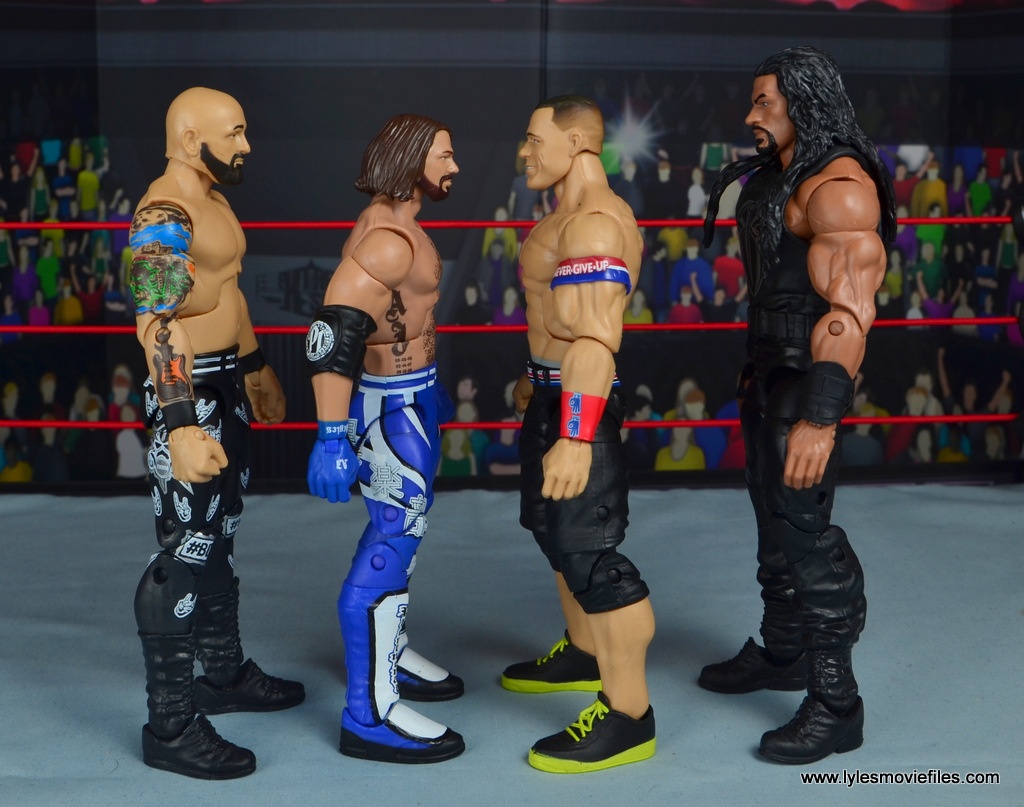 Scale:  Styles is 5’11”, the same height as fellow Bullet Club leader Finn Balor meaning both should look up at the 6’8” Luke Gallows and 6’1” Karl Anderson. Mattel seemed to have Styles’ height down just right so he’s shorter than most of the guys on the roster. 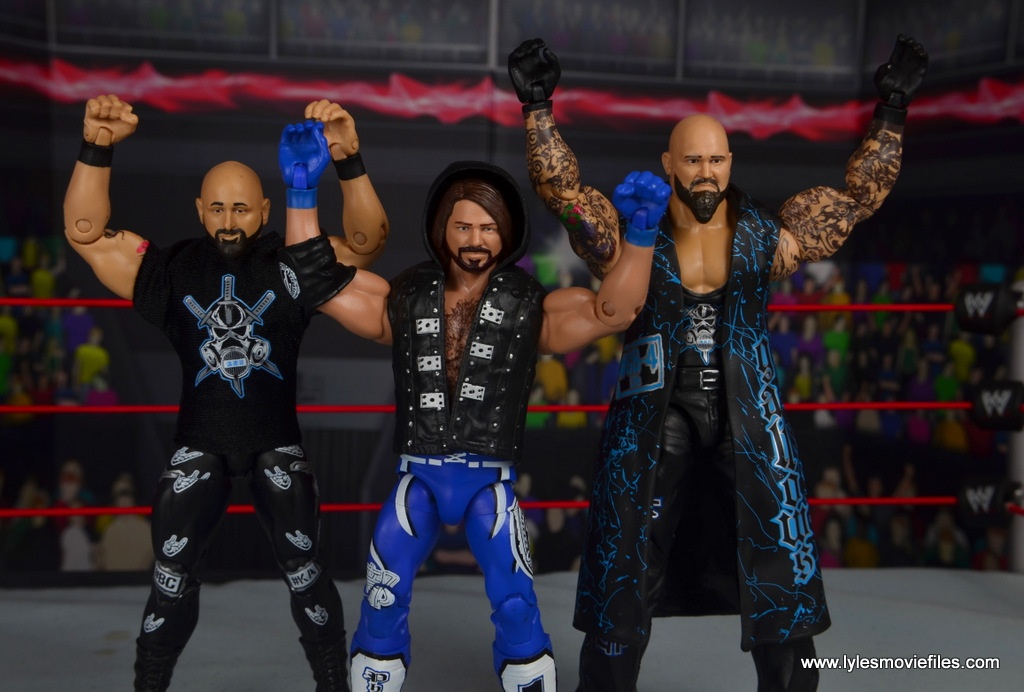 Paint:  Anytime Mattel uses a lot of white with an outfit there’s a high probability that the base color will bleed through in some area. That’s true with AJ as well, but it’s not as bad as I was expecting.


The white paint is actually caked on a bit roughly along the kick pads. It’s just a matter of white being a difficult color to paint on if it’s not the mold base.

AJ’s hairline and facial hair was painted fine and his hair is appropriately hairy.

Articulation:  AJ is one of the most dynamic wrestlers ever so it’s important that none of his articulation is hindered. AJ’s base body is solid so there’s no problem there. 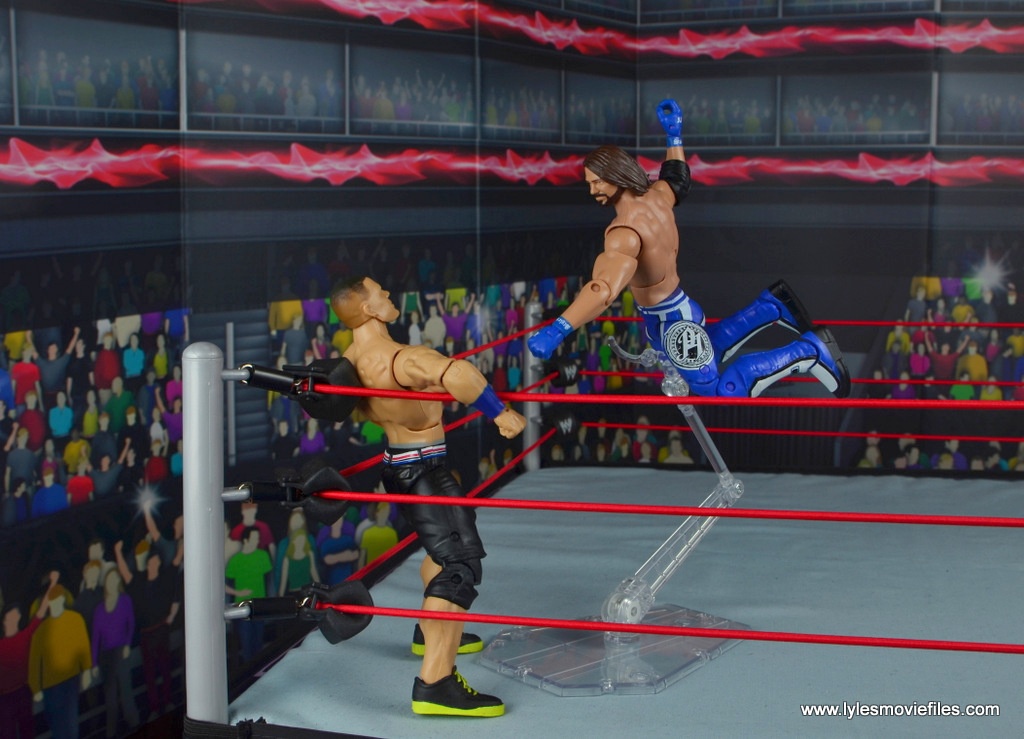 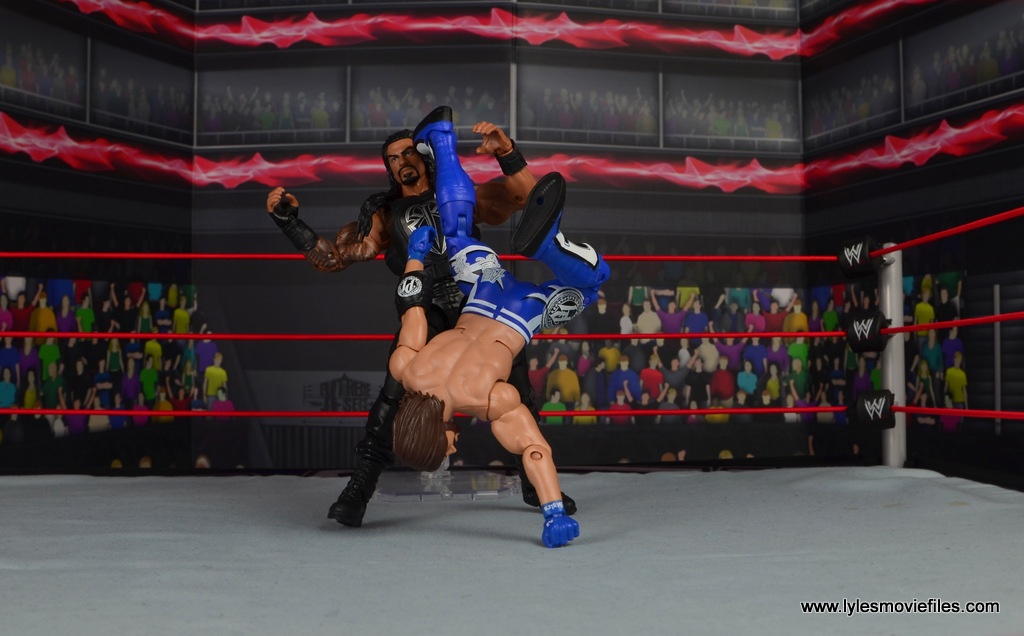 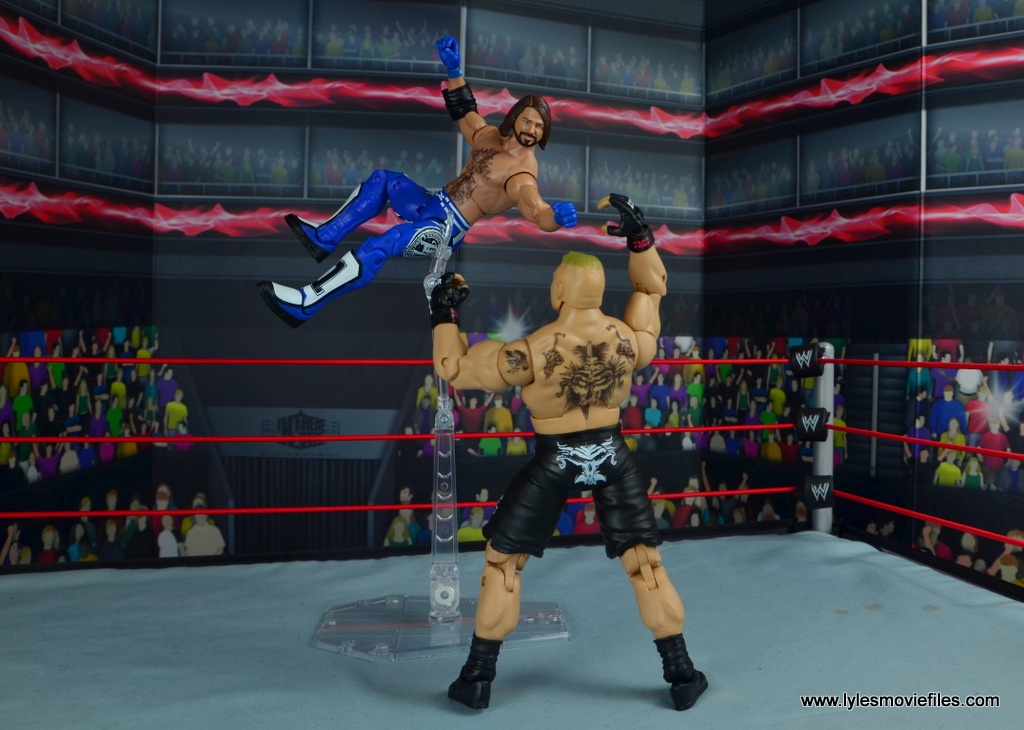 Accessories:  AJ comes with a far more detailed vest than his first figure. This one has some unique sculpted elements and a clever mechanism for his hood. 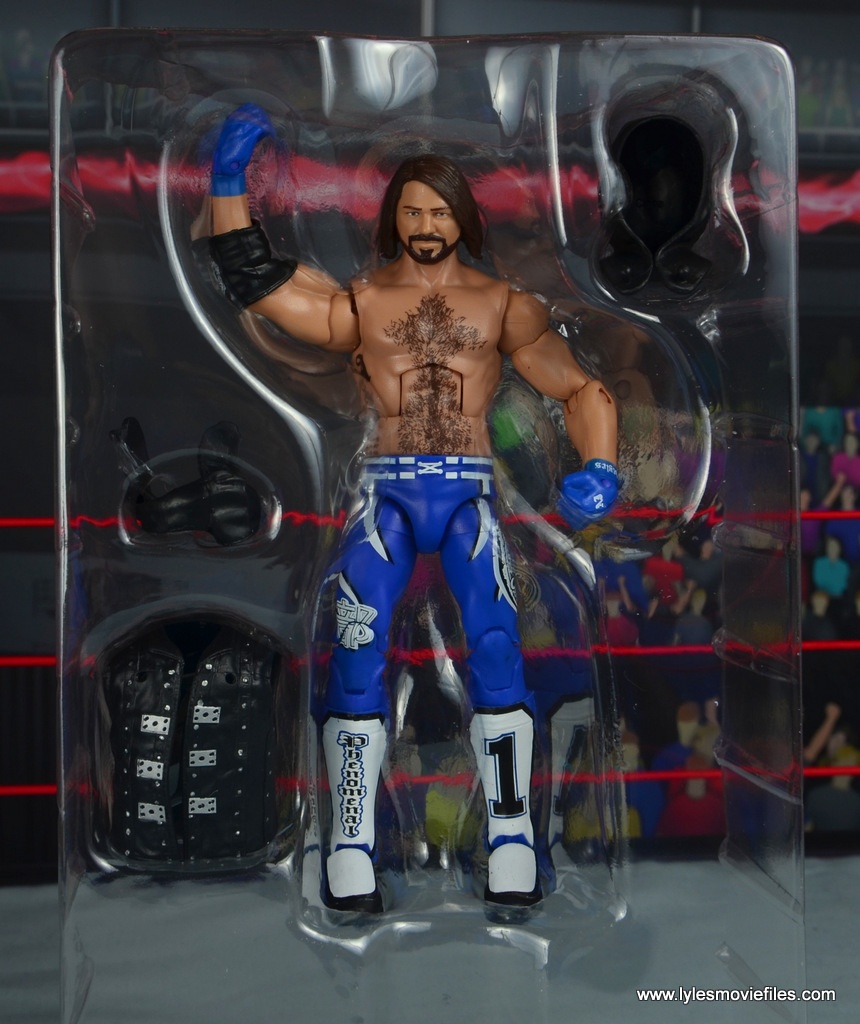 One piece sits up like he has the hood up. The other piece sits like he’s already taken the hood down. Given the complexities of the vest that couldn’t be done with cloth and this is a pretty cool solution. 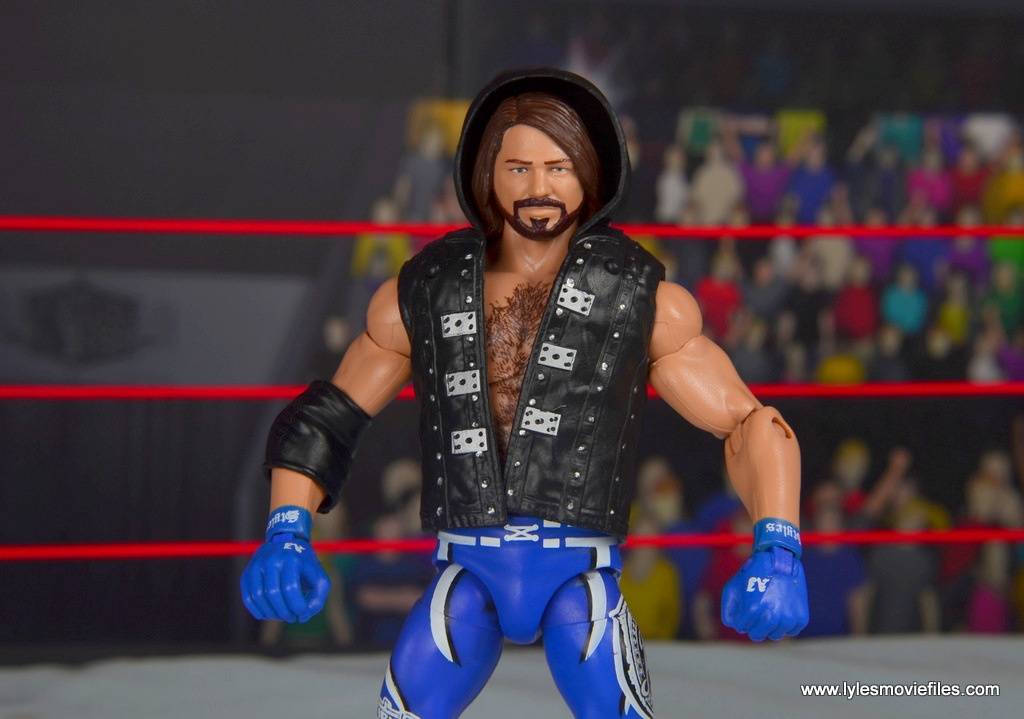 Styles comes with his respective segment of Rob Schamberger’s art display. I really wish his segment was connected to his Bullet Club pals Karl Anderson and Luke Gallows, but that’s a minor complaint. 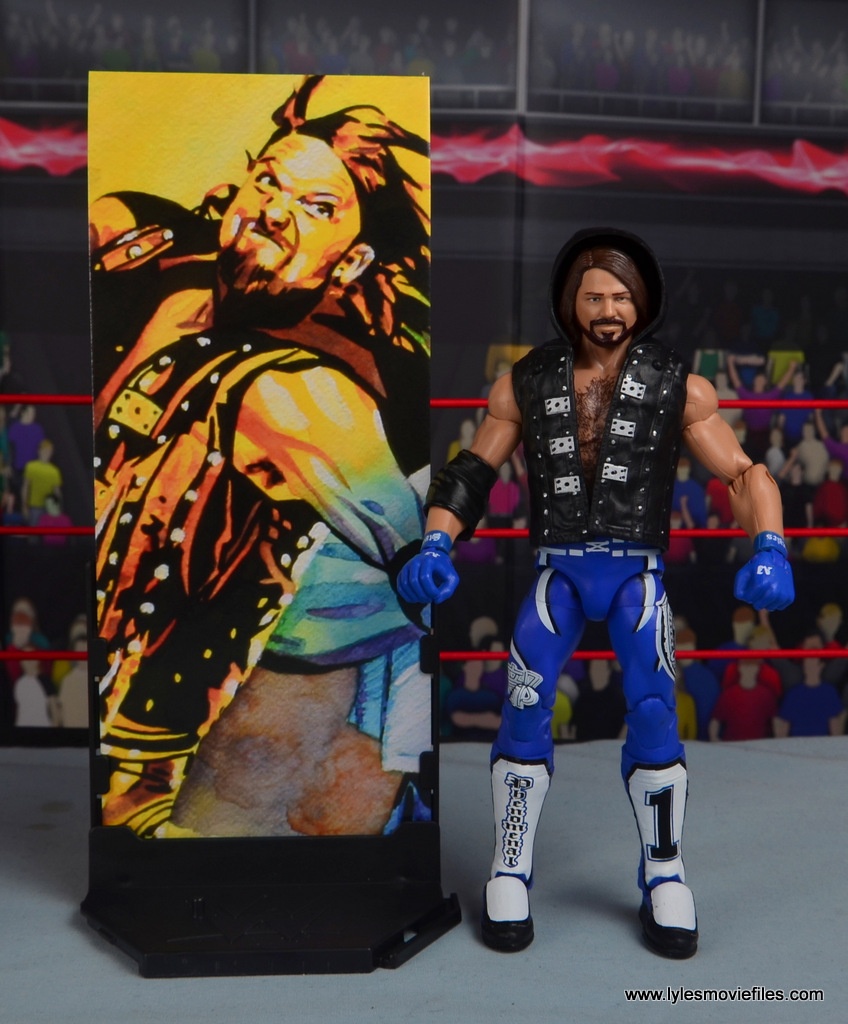 Worth it?  I found AJ for $18. I’ve always found $20 to be a few dollars too much and this is the (ahem) sweet spot for the Elite figures. 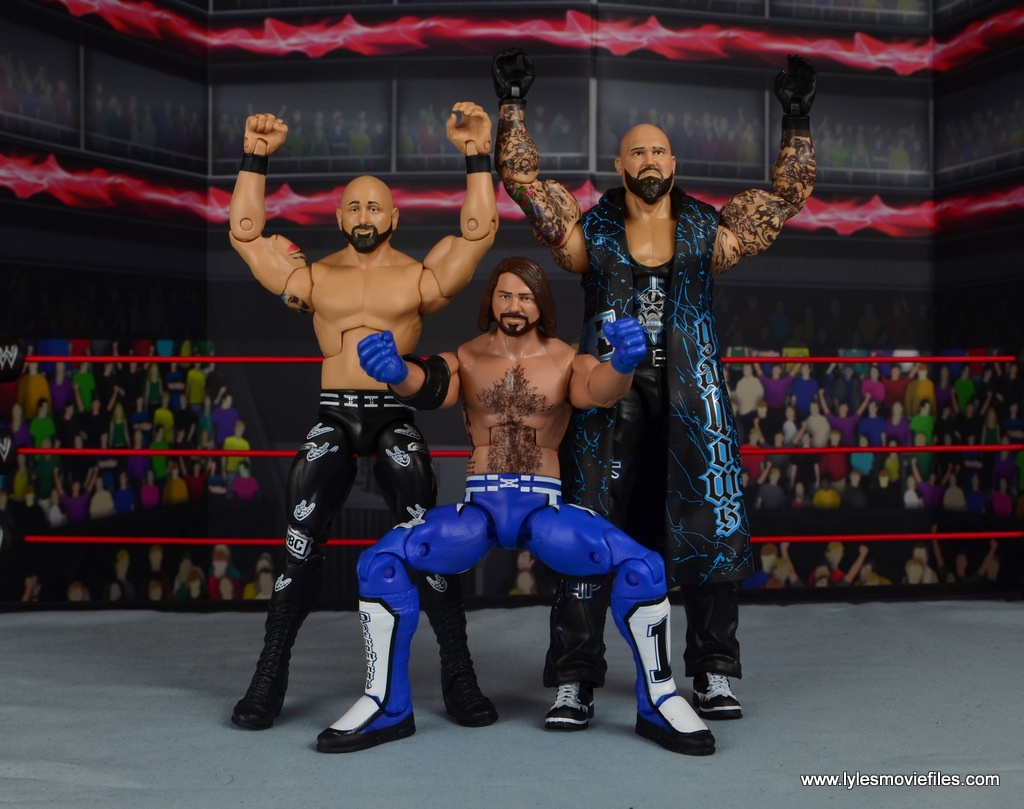 Where to get it?  I found AJ at Wal-Mart and have seen remnants of Elite 56 at Target. Toys R Us should get this series in soon, but Amazon has consistently been sold out of this set at the retail price point.