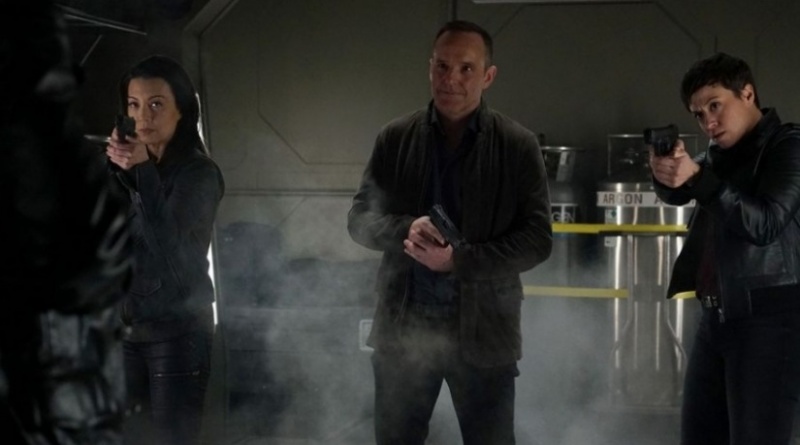 Agents of SHIELD pulled a glorious fast one with The Devil Complex.

Initially, it seemed like this was going to be a fairly slow paced episode with half the team dealing with another anomaly while Coulson finally got the drop on Gen. Hale. On the surface, this had the makings of a decent if not terribly exciting episode. And then it got really good. Like one of the best of the season good.

Maybe it’s just the constant sense of the axe being over the show’s respective head, but the writers really craft the seasons now with a sense of freedom and anything goes mentality. It’s paid off as SHIELD is the rare show that can pull off surprises along with a ton of ballsy creative risks.

As always we can count on amazing chemistry in the Mack and Elena interactions. That scene when Mack instinctively reaches for Elena’s hand before realizing it’s not there and that devastating look on both their faces was heartbreaking. Henry Simmons and Natalia Cordova-Buckley have quickly caught up to Iain De Caestecker and Elizabeth Henstridge in terms of showcasing a mature adult relationship. It’s odd how AOS has two of the best relationships going today in the comic TV landscape.

Coulson also doesn’t see all the ways the future is coming together as intended. He nabbed Hale via Quinjet and was now ready to get some answers. Hale insisted everything would be made clearer if Coulson came with her. It is kind of hard to restore trust when one of your goons sliced off the arms of one of Coulson’s friends. 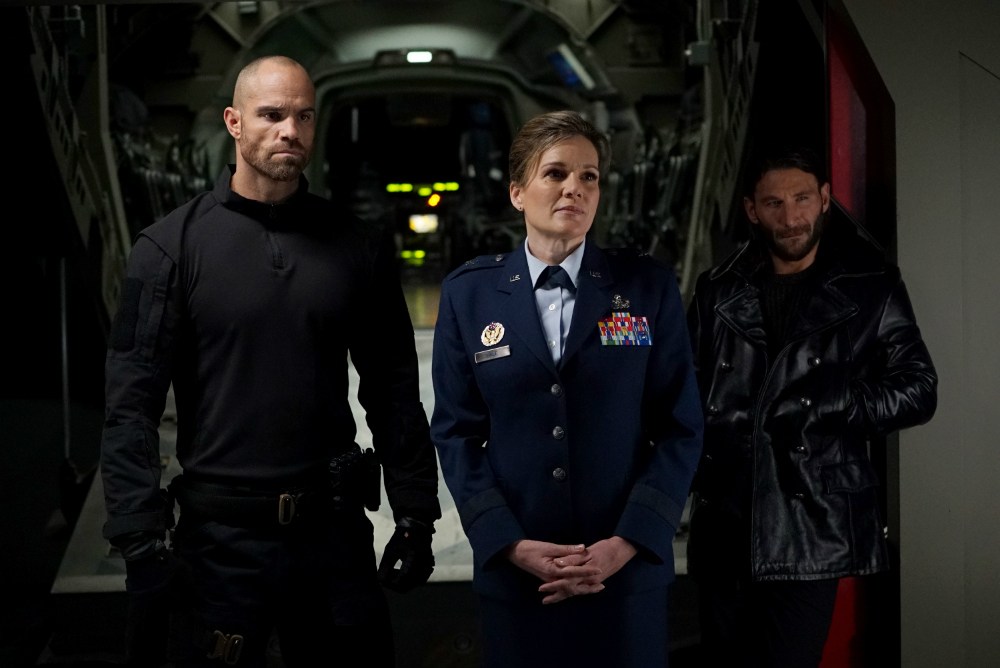 Hale didn’t get surprised by the abduction and set SHIELD up. Her robot driver was actually Creel, who forgot beer for the party, but had plenty of explosives. To secure her safe release, Hale calls up another blast from the past — Anton, who happily smirks at Coulson and company as he got one over on them again.

To keep his team safe, Coulson willingly goes with Hale, no doubt helping the next part of her plan run smoothly. At least that’s happening for someone here.

A new anomaly has arrived and its Framework Fitz, here to make the tough call and restore Daisy’s powers so she can properly harness the Gravitonium. Mack, Elena and Simmons are busy dealing with a re-animated Hale droid. But Framework Fitz was no wraith from the fear dimension. 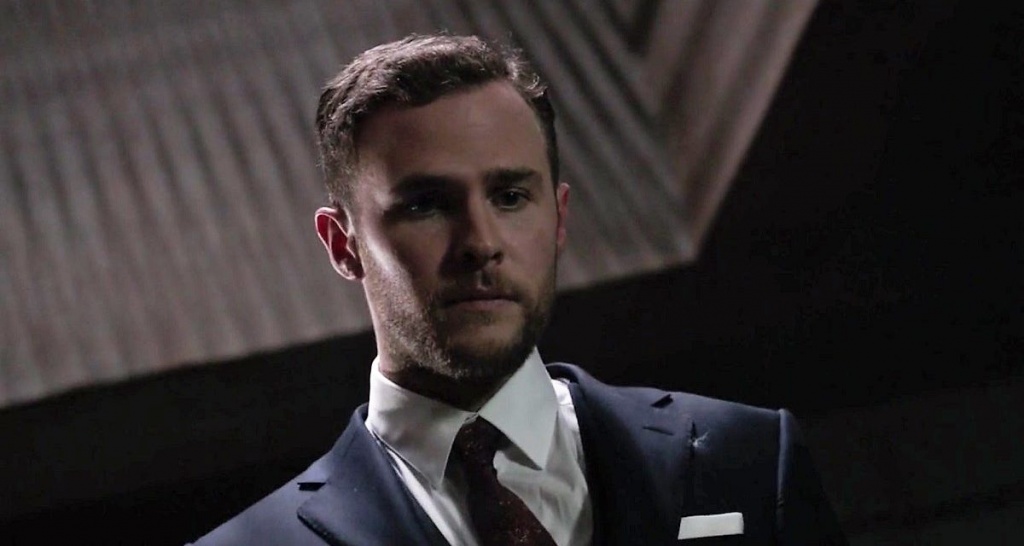 AOS pulled a Fight Club on us as Framework Fitz was Fitz all along. He’s still being influenced from the memories of his time in the alternate reality. I love when shows have real lingering effects and trauma from previous seasons. Fitz kept insisting he wasn’t right and this paid this off spectacularly. This was a great time to pull out this bombshell as Fitz’s actions keep pushing SHIELD to that future they’re so desperately trying to change. Fitz’s decision could permanently ruin his friendship with Daisy while Simmons is understandably devastated and unsure how this affects them.

I was starting to get worried with Deke in that he was going to become annoying in an entirely new way as he followed his grandparents like a puppy. It makes sense, but the first half of the season spent so much time focusing on Deke’s father that his mom seemed like an afterthought. I was so glad Devil Complex ended with Deke telling Simmons he’s their grandson. Secrets in these comic book shows between heroes is incredibly frustrating. And Simmons teary response followed by vomiting felt strangely appropriate in that instance. 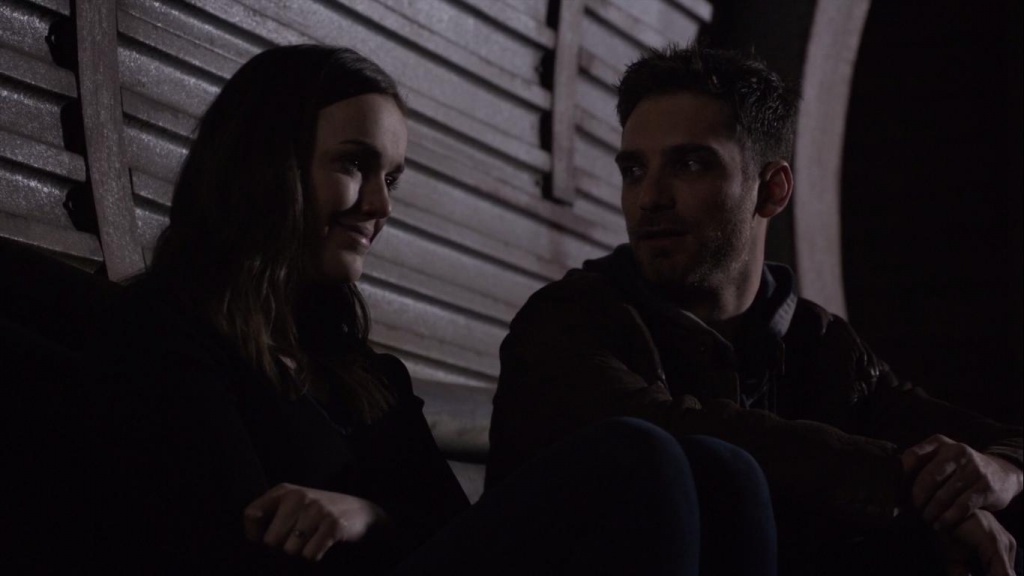 With Coulson in tow, Hale has a meeting with her superior — a member of the Confederacy, who legit surprisingly is also a member of Hydra. Uh-oh.

File Closed: The Devil Complex proved Agents of SHIELD has plenty of surprises left in Season 5 and things are about to get a lot more interesting.