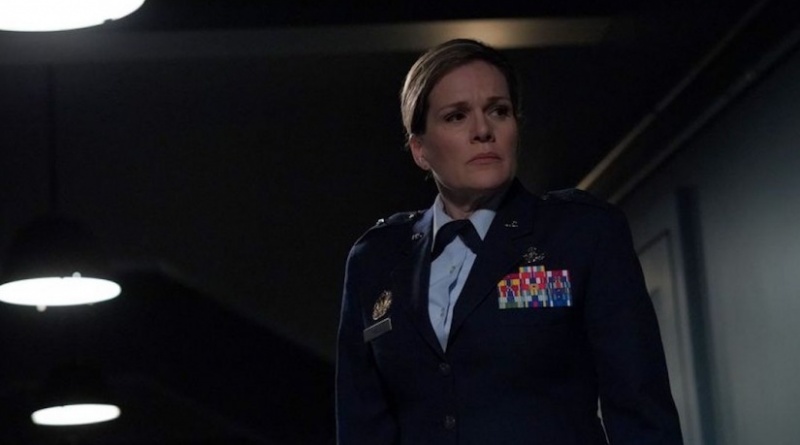 Rise and Shine continues Agents of SHIELD’s successful back on track roll since leaving space. The return to Earth and the present day storyline is definitely making up for the slow start of the season.

This episode featured another of AOS’ go-to staples for top shelf installments — the time lapse flashback. Gen. Hale figured giving Coulson her true background would help win him over to her ultimate goal of having SHIELD and HYDRA team up…

We kick things off 28 years ago with Hale going through the HYDRA system and participating in all of their silly indoctrination exercises like killing her dog. It was fun seeing the teenaged Hale hanging with Jasper Sitwell and her burn saying he was going to always be middle management proved entirely accurate.

Rise and Shine also allowed for a Daniel Whitehall sighting. I love that SHIELD now has this deep history of characters who can pop up when we least expect even when they’ve been killed off. Whitehall shares the news that HYDRA has come close to perfecting the super soldier formula.

A teenage Von Strucker (!) wants to use the Tesseract, which plays in nicely to his creation of super powered individuals in Avengers: Age of Ultron. Hale wants to go to beyond that and travel to space where it originated. Despite Hale’s clear acumen and original thinking HYDRA ultimately wants her to take the traditional role of birthing HYDRA’s next great leader. It’s a significant indignity and does a masterful job of explaining Hale’s dismissive attitude toward males in position of authority. With just one scene, Hale goes from being an antagonist to becoming a far more fleshed out and interesting character.

Fast forward to two years ago with Ruby having learned all of her mother’s lessons. Hale was a good teacher even though she has a clear blind spot to Ruby’s dangerous tendencies. Before Hale is fully warned about those issues, HYDRA goes belly up with Gideon Malich’s capture. Talbot has enough intel to know Hale’s superior is HYDRA, but has no clue she’s rolling with the snakes too. 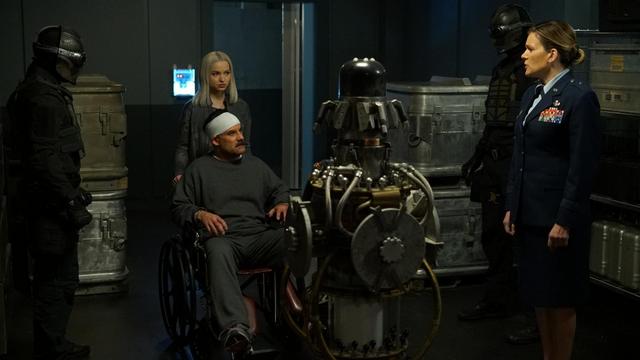 Another time jump takes us to six months ago where Talbot is still very much alive despite reports to the contrary. I kept feeling that crummy, off-camera death didn’t do justice for one of the show’s long time supporting characters. With Talbot’s mind in a bad way after being shot by the Daisy LMD, Talbot reluctantly agrees to go to a special rehabilitation center under Hale’s supervision. But, Talbot cracks under the Ruby dismissive test — just like Werner did back in Principia.

Episode writer Iden Baghdadchi crafted some excellent dialogue throughout Rise and Shine. Adrian Pasdar seemed to have fun hamming it up with lines calling Ruby the CrossFit Tinker Bell and asking Hale what flag do you fly? Hale proves she’s not the typical villain as she casually spares Talbot from getting killed by Ruby and has him taken away…

Time to get nearly caught as 24 hours ago sees Coulson in the base. It was surprisingly rewarding having Coulson blow off the Ruby trap unlike Werner and Talbot. Hale wants to introduce Coulson to the Confederacy leader Qovas (Peter Mensah, 300). Along with questioning the name of this alliance of aliens and HYDRA, Coulson isn’t sold on their willingness to help Earth from an invading armada. This wasn’t Thanos’ ship, was it?

Thrilled to finally have someone hear her out to this point, Hale says she’s set to make an example of the Confederacy after taking out the armada. All that’s left is finding the suitable Inhuman to have at the forefront. Coulson infers Hale means Ruby and quickly says Captain America was selected for his heart, not for cutting off hands in another great line. 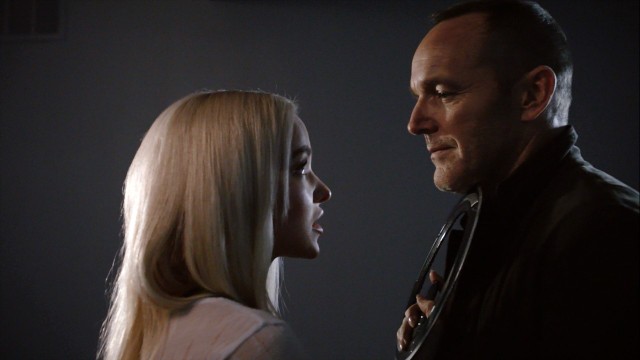 Hale has another person in mind for this project dubbed Destroyer of Worlds — Daisy. Man, I’m hating how good this back half has been to make me care when I watch the space saga again. But this time it’s Hale who won’t listen to Coulson’s admittedly crazy sounding story. That earlier insight into Hale really helped to explain her skepticism and dismay at Coulson being like everyone else. And unlike Coulson with the Avengers, he learns Talbot is alive after Ruby tries to use him to threaten Coulson.

Finally, it’s time for the present day at SHIELD HQ. May and Daisy follow the breadcrumbs and realize Hale is with Hydra. The Hale Hydra joke was too obvious not to use so I’ll allow it. May figures Fitz is the best way to track down Hale, but Daisy is still understandably pissed at him. It’s wild how one of the most stable bonds in the series is now seemingly irreparable.

Simmons wraps up the new arms for Elena, and emboldened by Mack mentioning Yo-Yo feels invulnerable, she tells Fitz about Deke. I loved that Fitz didn’t immediately change his opinion on Deke and was even more disappointed. That was very funny.

Ruby quickly grasped that she’s being passed over for Daisy and that’s not sitting well. Just in time for Daisy to start taking some drastic steps of her own by talking to Robyn. This won’t end well…

Rise and Shine delivered another amazing episode that greatly fleshed out Hale’s agenda and kept the season’s momentum rolling.