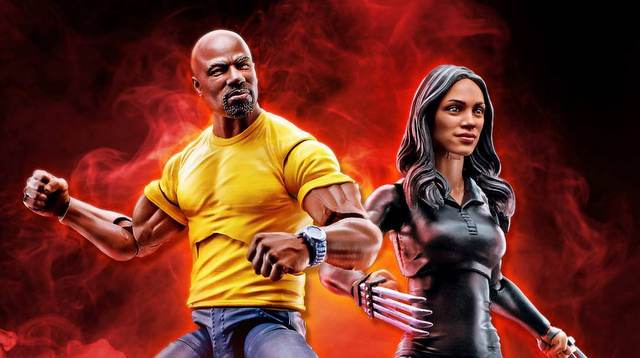 Every so often, like maybe three times a year, it pays to be patient in action figure collecting. I’ve got exactly one Marvel Legends Luke Cage figure and have been patiently waiting on a modern version.

I was intrigued, but didn’t bite on the Marvel Legends Defenders four pack. That modern Luke Cage figure looked more like Thor size than what Cage has typically looked like in the last 15 years. With the popularity of the Netflix take on the character I figured it would be a matter of time.

When Hasbro released its first wave of Netflix Marvel Legends without a Luke Cage, I was a bit worried, but now finally that patience paid off. Hasbro revealed a new two-pack featuring Luke Cage and Claire Temple. Like the Netflix Jessica Jones figure, this Luke will do just fine as a modern comic book version. I like Mike Colter’s take on the character so this is just fine.

That Rosario Dawson head sculpt is pretty amazing. She rocked those claws when she helped Iron Fist and Collen Wing take on Madame Gao’s goons in The Blessing of Many Fractures.

I’m digging this release format of a main character and a civilian supporting character. Hasbro also has that slated with the Black Panther Killmonger and Everett Ross pack. It’s a great way to get character like Mary Jane released.