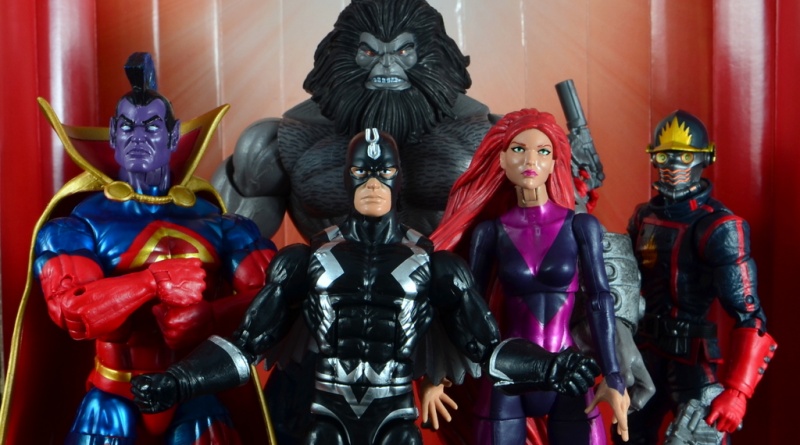 With Avengers: Infinity War winding down its theatrical run, I figured I needed to stop slacking and finally review my Marvel Legends Thanos Imperative set. Yes, this Marvel Legends San Diego Comic Con exclusive has been chilling on my to-review list from about as far back as I decided to start reviewing figures.

Naturally with more than half the set available by other means and in most cases improved upon, I’m not as thrilled with this set as I would have years earlier.

Packaging:   Hasbro always makes some amazing packages for its SDCC exclusives. This more or less got the ball rolling with extravagant packaging. Basically the setup is hollowed head of the deceased Galactus. I’m sure since this point Galactus has been killed and resurrected a few more times.

On the back, four of the figures — Star-Lord, Black Bolt, Queen Madusa and Gladiator are prominently displayed. To see the fifth — Blastaar — you have to lower the packaging. It’s set up to look like he’s emerging from Galactus’ mouth. This might be my favorite figure presentation of the line and totally fitting for the character. There are two fold-outs for the bottom portion of Galactus’ head.

We’ve gotten cool packaging from the exclusives before, but this one is the most practical as it can also be used to re-enact a huge moment from The Thanos Initiative #2. And this is probably the closest we’ll ever come to having a properly scaled Galactus … or at least his zombified head. 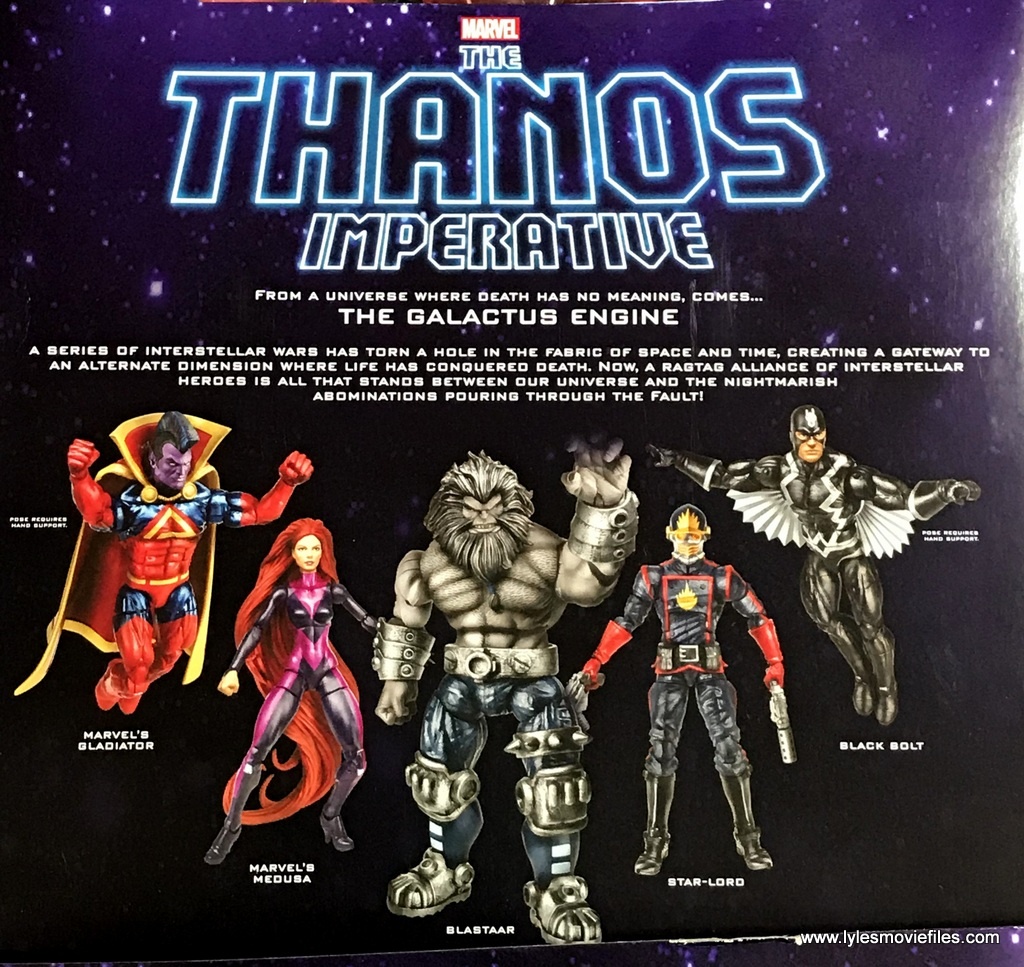 Likeness:  Black Bolt is one of the gems of the set for me. Hasbro previously gave Black Bolt a go with one of its earlier waves and the results were pretty underwhelming for the ruler of the Inhumans. 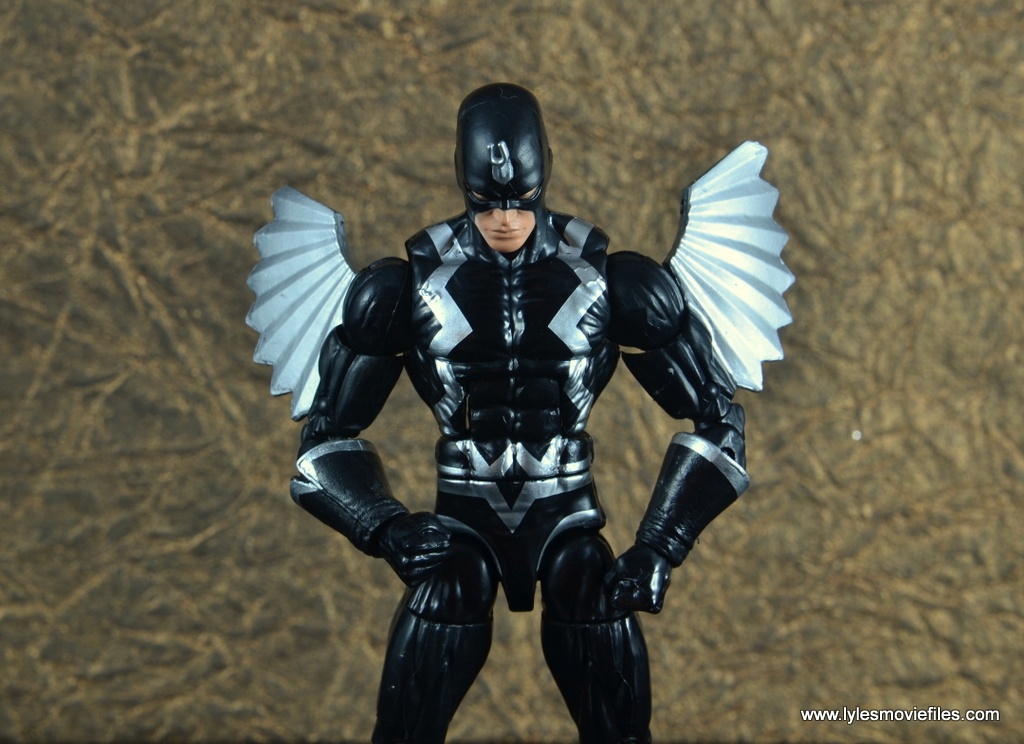 This figure is far more fitting. It uses the Bucky mold, which was ideal for the time. Due to the wings being attached to the arms instead of affixed to his back like Morbius, Black Bolt looks a bit silly with the arms out of the outstretched position. 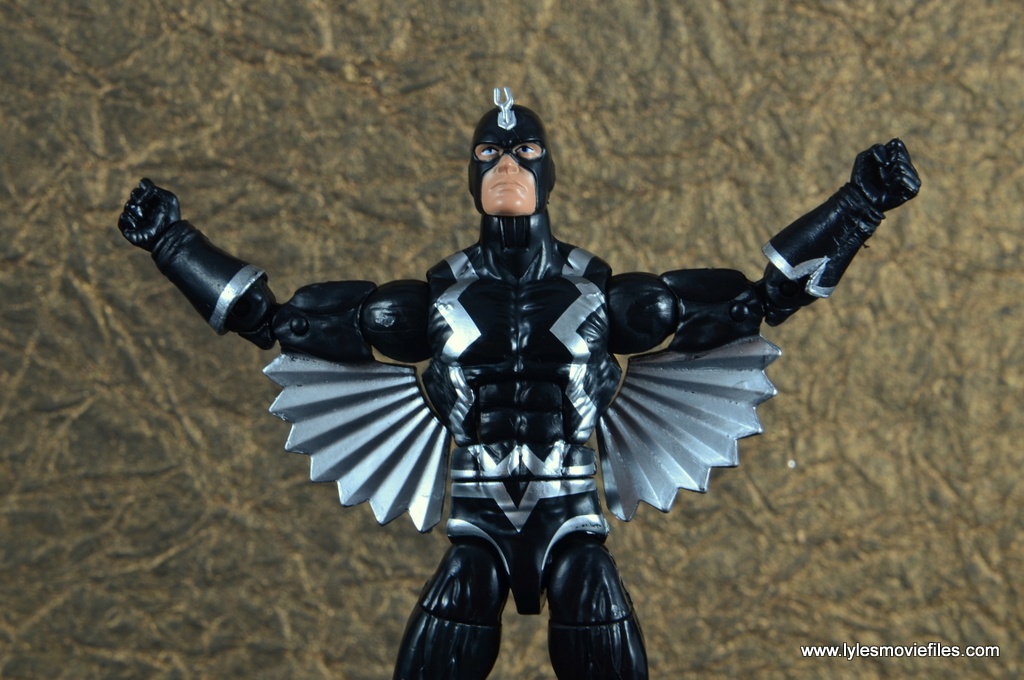 I think Hasbro would probably go with the Spider-Man UK body now as it’s a tad thicker and better resembles the Kirby visual. I love the stern head sculpt as it captures Black Bolt’s thoughtful, patient demeanor. Hasbro has since released a blue version of Black Bolt, which I like a tad more. In Black Bolt’s case, I kinda like the black variant so I’ll likely end up keeping it as well. 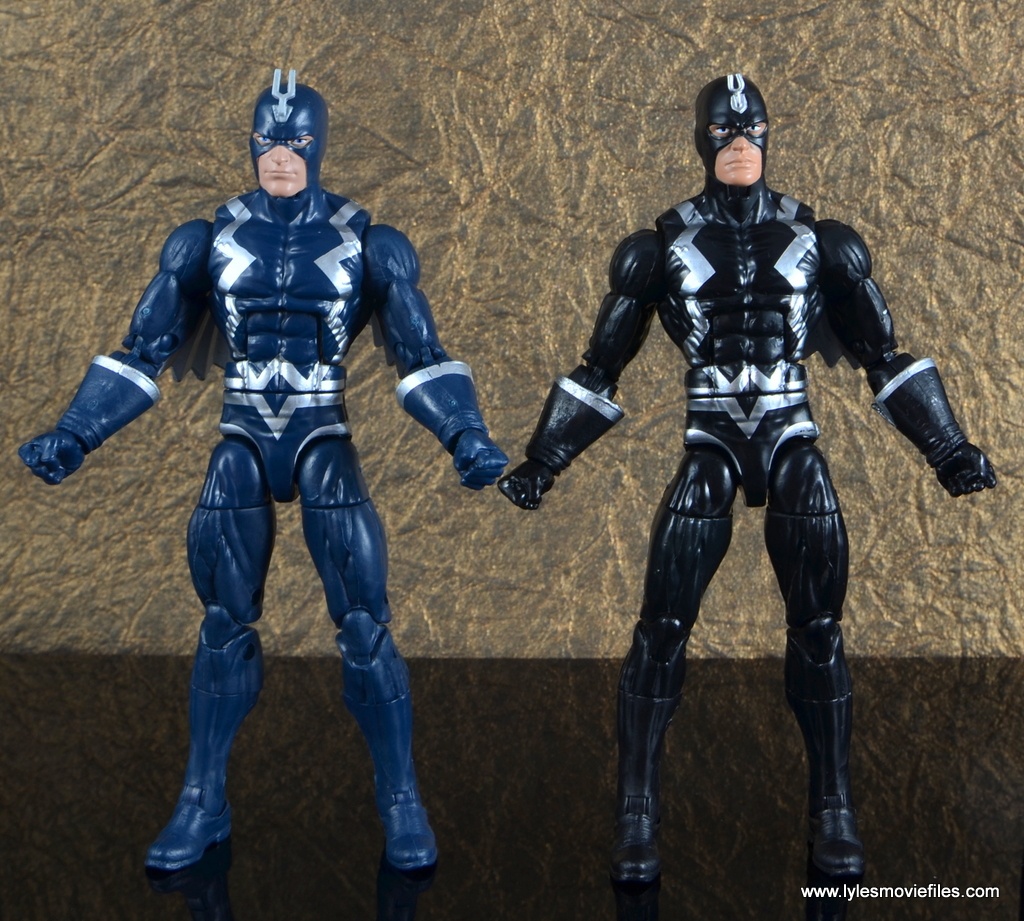 Medusa is in one of her modern attires. I dig the subtle M in her costume layout. Her expression is harsh and works pretty well as both a Frightful Four era or as the weary queen tired of battle. Her hair was always going to be the trickiest part of her figure. This may be the worst engineered figure from Hasbro that I’ve picked up in a long time. 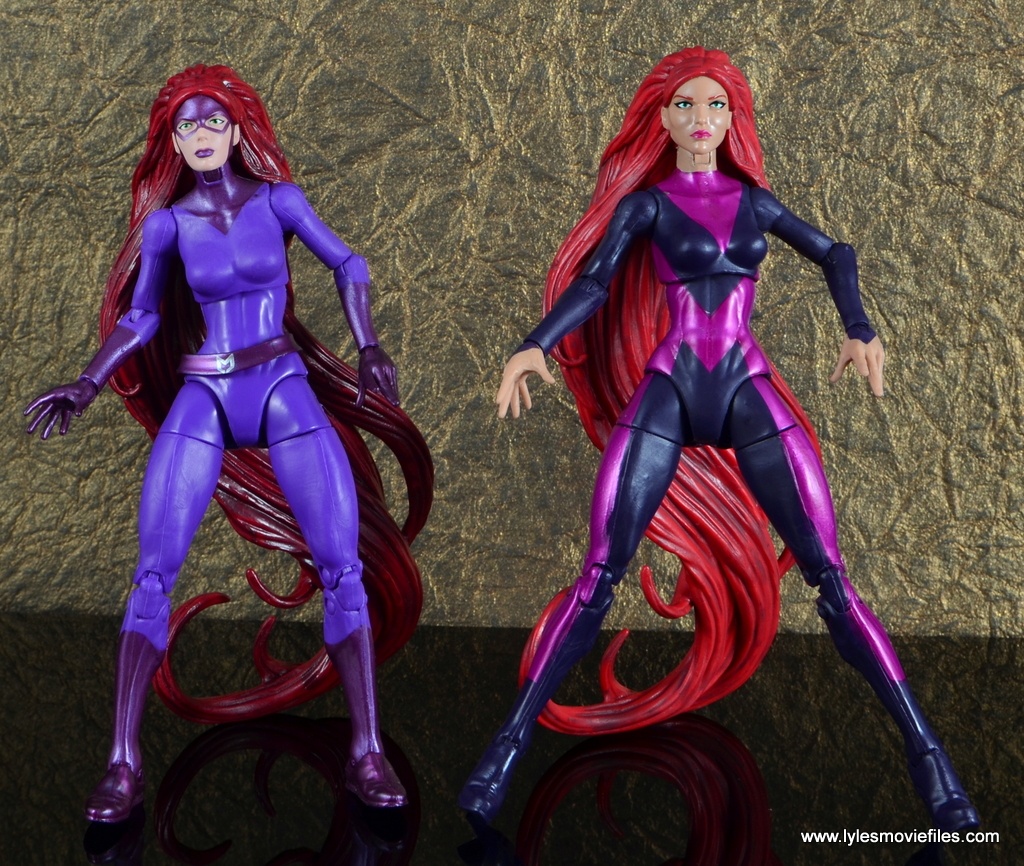 Naturally, the thick plastic used for her hair makes her ridiculously top heavy. But her head sits too high on the neck. This doesn’t affect the figure aesthetic, but moving Medusa certainly gets tricky as a result. Given all those other factors, adding high heels wasn’t the smartest choice. I quickly gave up on spending five minutes to get her to hold a pose without falling after 10 tries. The Walgreens exclusive is definitely the better option here. 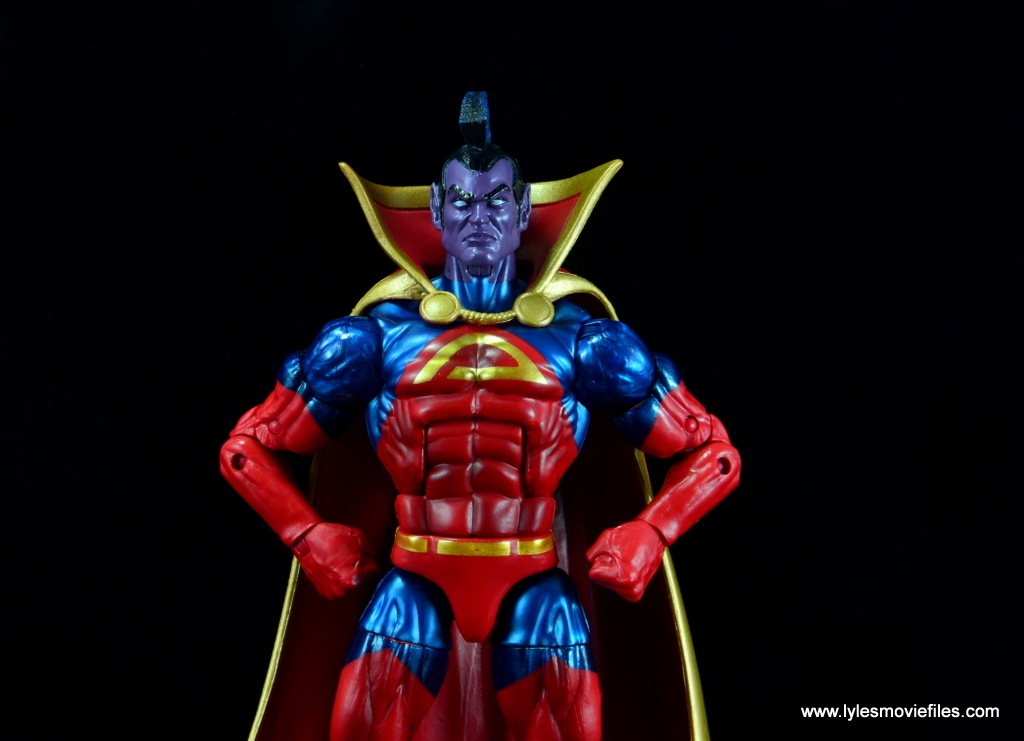 Gladiator looks awesome. This is exactly how I’d envision a Marvel Legends figure of him. This is the Imperial Guard’s leader/heavy hitter who looks ready to take out the Fantastic Four by himself. While most of the cool factor comes from his paint job, the head sculpt with perfectly realized Mohawk and epic cape helps too. 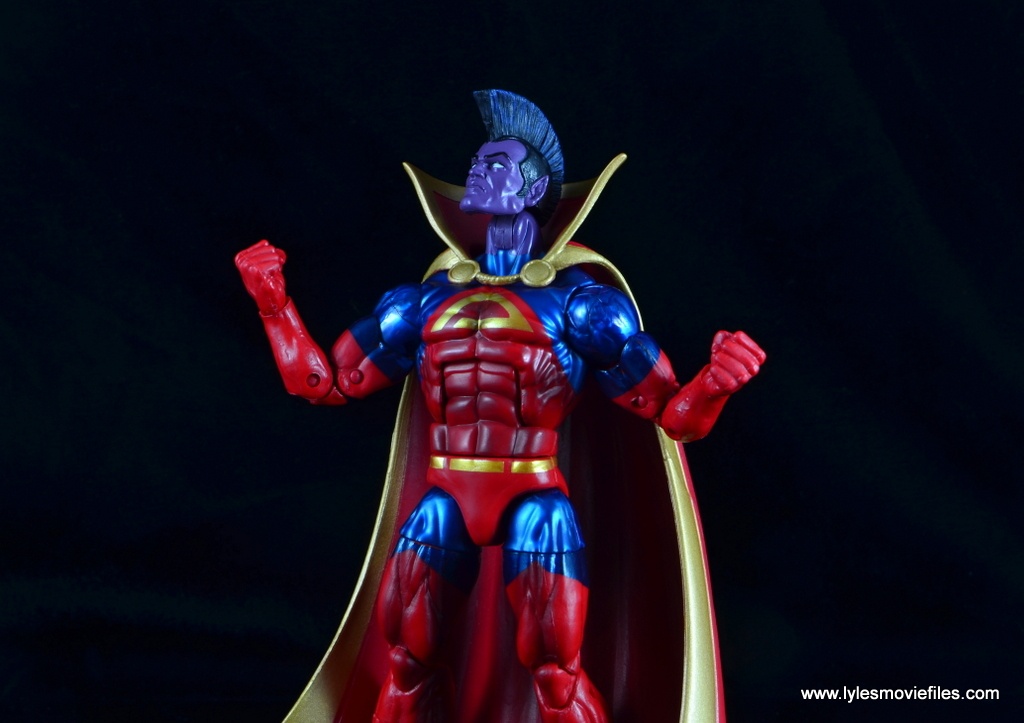 I’m not entirely sure if the Hyperion body was the best choice, but I can’t immediately think of a better option. Like Medusa, Gladiator has a problem with the head and neck peg. His bobblehead is more noticeable. The cape peg for my figure is entirely uninterested in staying secure in the hole in his back. That gives it a somewhat unstable feel as I posed Gladiator, but it wasn’t entirely annoying. 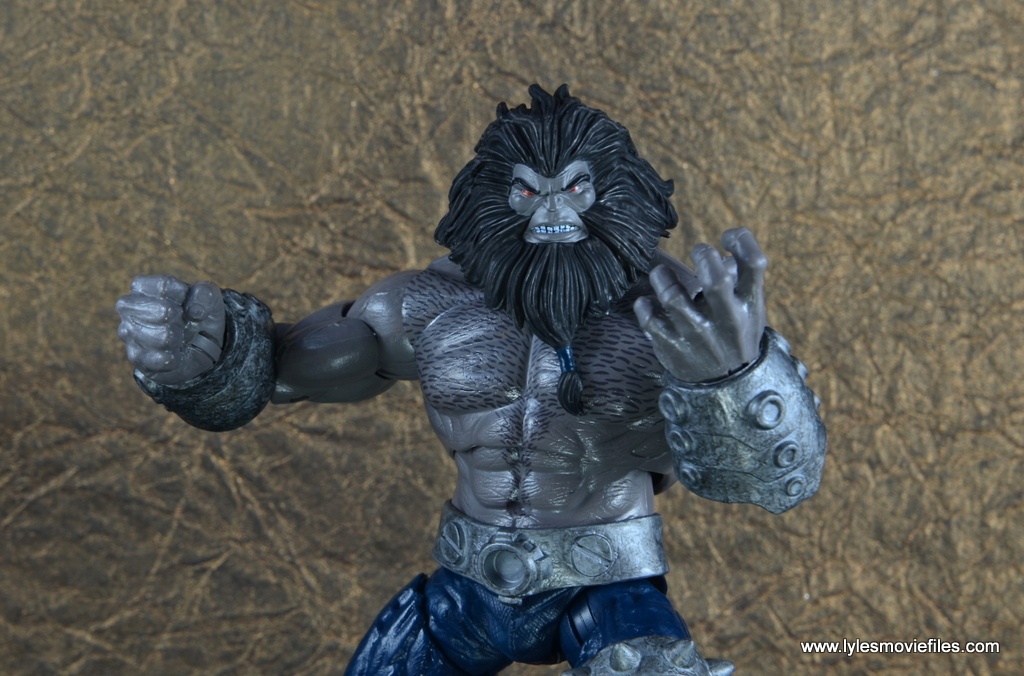 Blastaar is a BAF sized brute. This guy is massive and really looks impressive. I tend to favor the classic takes on characters over modern, but Blastaar’s remake works for him. The metal gauntlets, belt, kneepads and shoes have a nice, gritty look. I appreciate that Hasbro went with a fist and open hand for throwdowns and throttling.  And there’s something inherently cool about the tied ponybeard for a space villain. 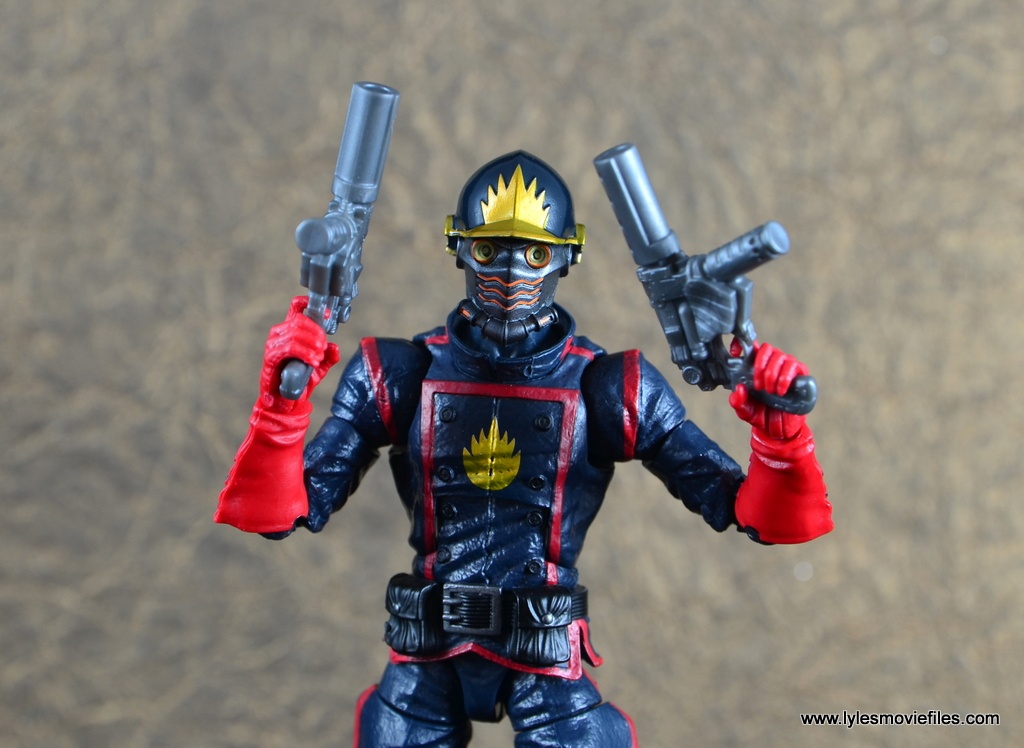 Star-Lord is the same that came with the Entertainment Earth/FYE exclusive just with a slightly different paint scheme. The arms and legs are just a tad too long, but overall this figure still looks good.

Scale:  Blastaar is massive and around the same scale as the modern Hulk figures. That definitely makes him impressive next to the regular sized characters.

Gladiator is scaled along the size of the recent Thor figures using the Hyperion body. He’s thick and has some useful height to make him stand out. 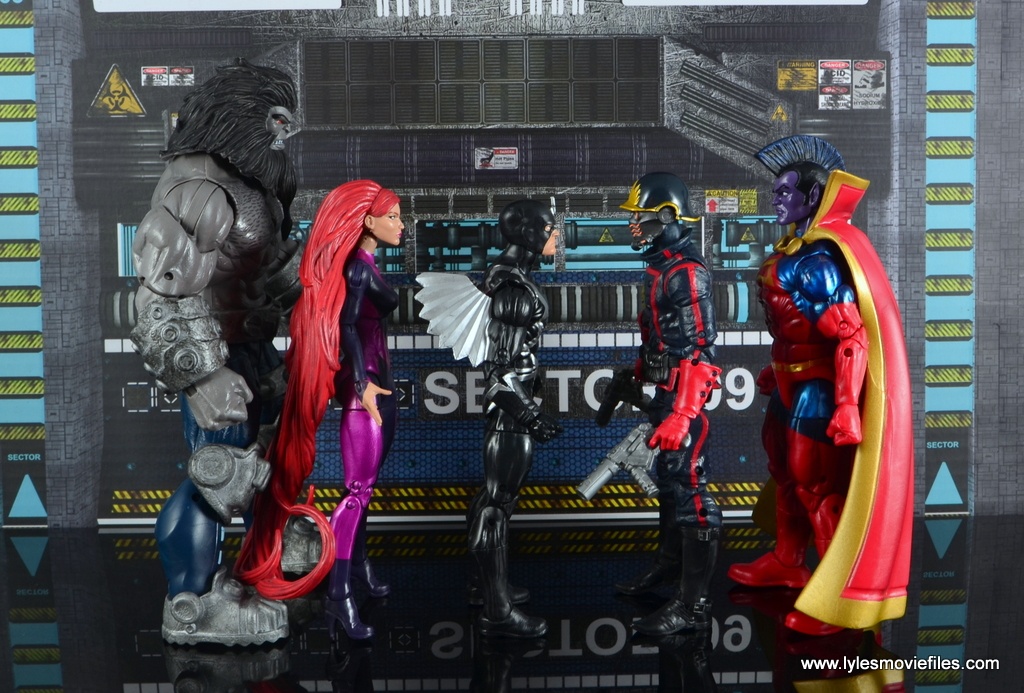 Medusa kinda towers over Black Bolt since for some reason she’s using the same body as Valkyrie. That’s a real weird decision since Medusa has never been portrayed Amazonian. Her heels will cause some frustration since it makes consistent standing…challenging.

Black Bolt is a regular sized figure though he looks small next to everyone else. Good thing he doesn’t have a Napoleon complex.

Star-Lord is a tad too tall thanks to the boots. His helmet is appropriately scaled to believably fit a head inside.

Paint:  The paint is a strong part throughout this set.

Star-Lord is solid. His colors are significantly changed up from the other release. I prefer this color scheme with the black boots and belt. The detailing in the eyes of the helmet is sharper. The darker gunmetal used on the pistols is better and less plastic looking as well. 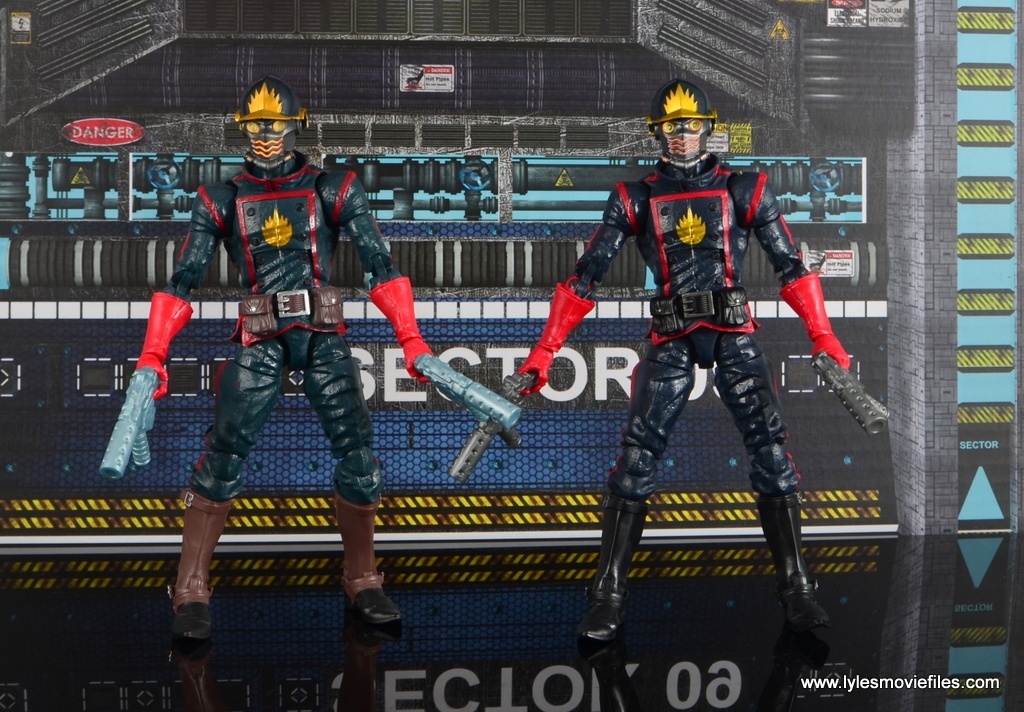 Black Bolt has a simpler paint scheme, but it’s clean save a few scratches. The silver accent pops and gives him the classy look he needs.

Medusa’s outfit looks great. I really like the shiny metallic hot pink elements. That’s something Hasbro doesn’t overdue and it gives an added oomph to characters whose outfits would otherwise look a little plain.

Blastaar has solid chest hair applications and a good black wash in his hair. It’s the metal parts that stand out the most thanks to the black wash and shade of grey used.

Gladiator is the most eye-catching though. The pearlescent blue conveys the elite of the Imperial Guard visual and it complements the flat red well. The gold is striking and combined with the purple skin tone, this is a figure that’s going to catch a lot of attention on your shelf.

Articulation:  Most of the articulation for the guys is the same as you’d expect from any Marvel Legends figure. Gladiator is thicker, but accomplishes most of the standard poses. 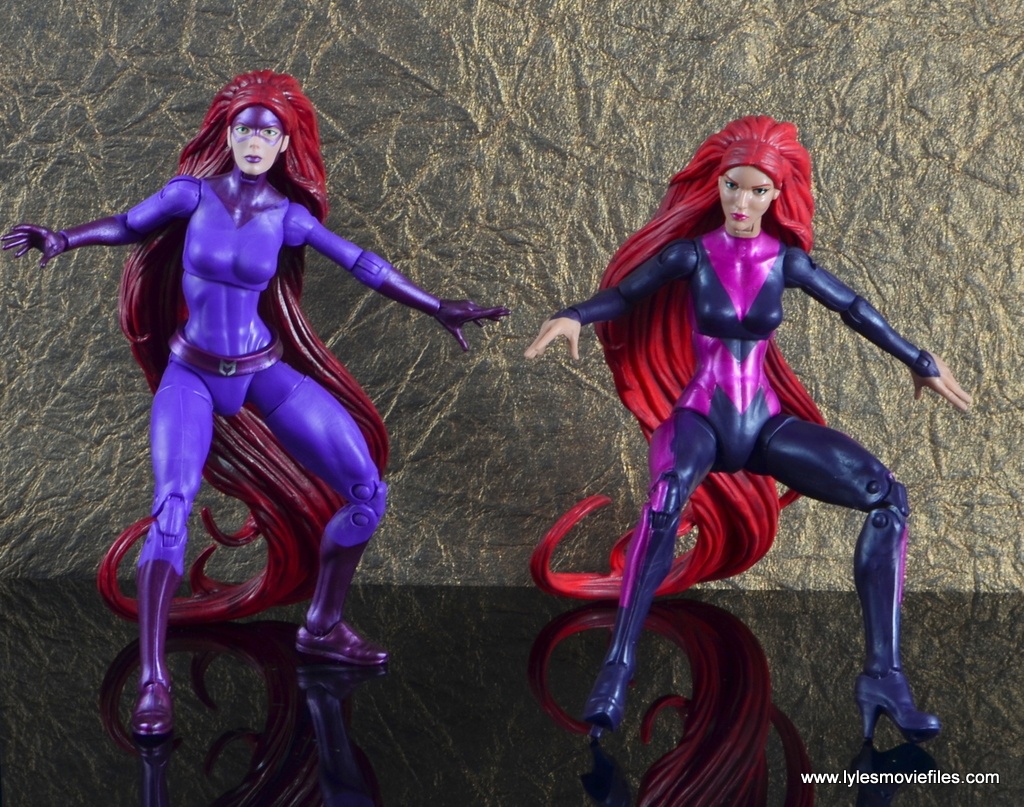 I’m putting asterisk by the articulation point Medusa doesn’t have. Otherwise, the Thanos Initiative figures have: 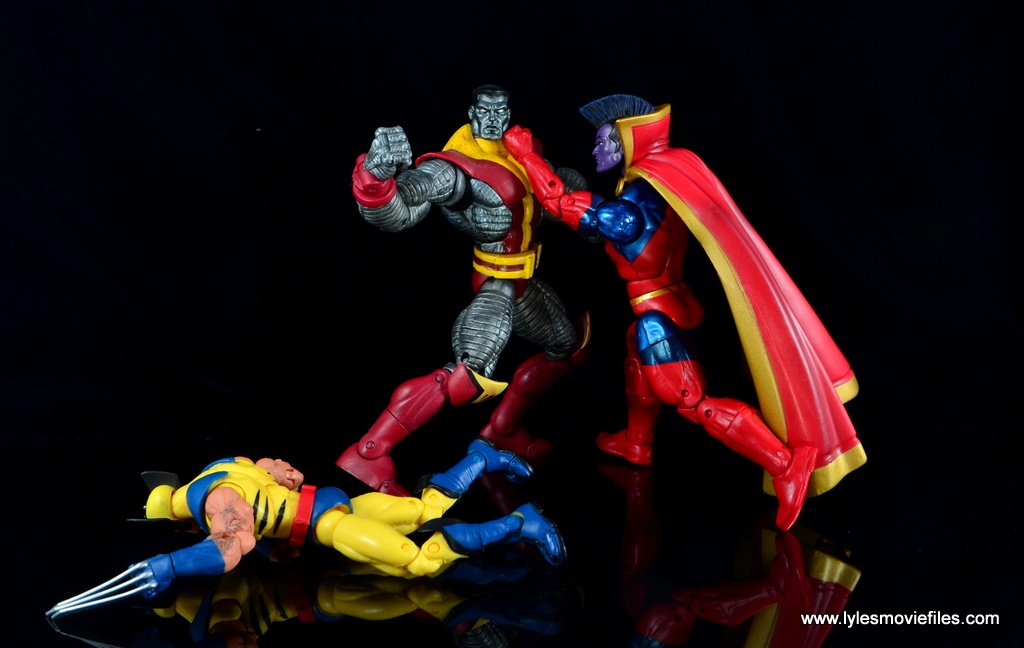 Accessories:  This set doesn’t have a lot of accessories with only Star-Lord’s pistols, but essentially Blaastar is a BAF. Also factor in these characters were likely chosen in part because of the lack of necessary accessories. The only other thing that would have been cool — though tough to implement — would be some hair attachments for Medusa. 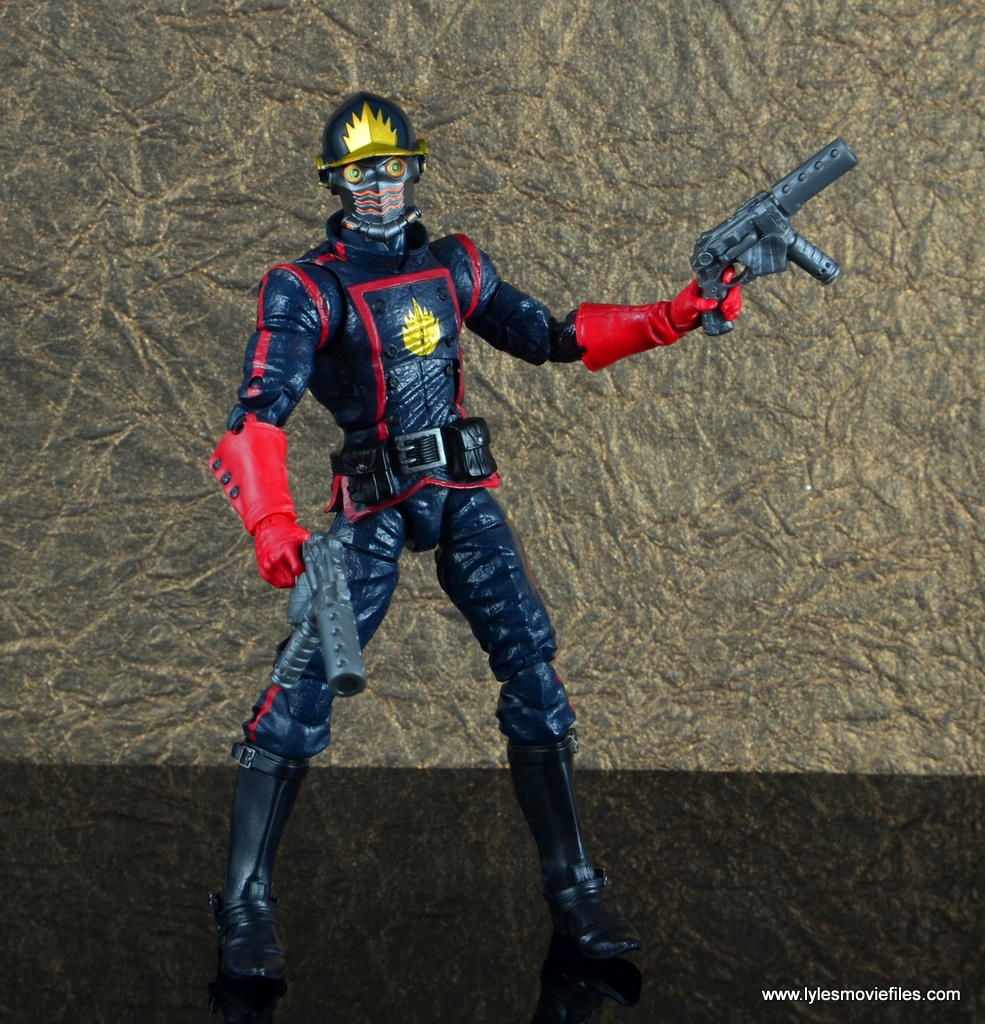 Worth it?  Despite the re-releases of Black Bolt and Medusa and Gladiator slated for the X-Men Wave 3 series, this set remains highly sought after on the aftermarket with figures typically going for $50 to $60. The entire set is around $250. I seriously don’t think it’s worth that price if you’re on the fence. 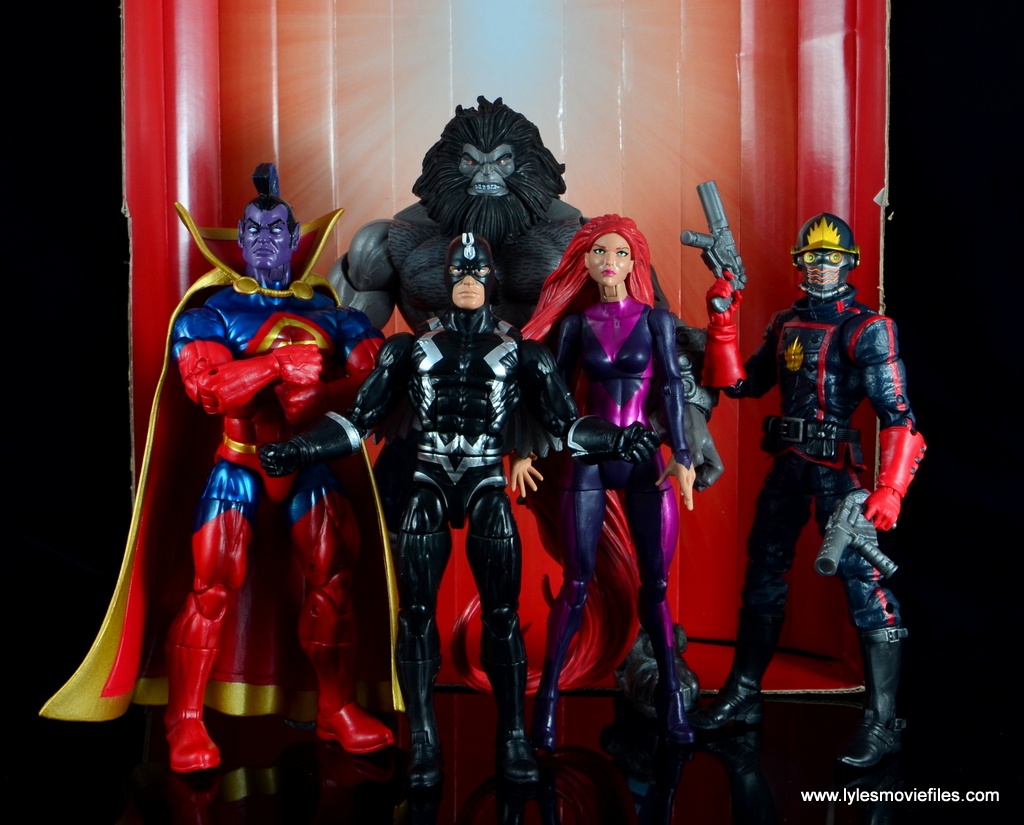 Blastaar, Gladiator and two cool variants of Star-Lord and Black Bolt and that incredible packaging make the set worthwhile. I’d have a fonder take on Medusa if she could stand properly. 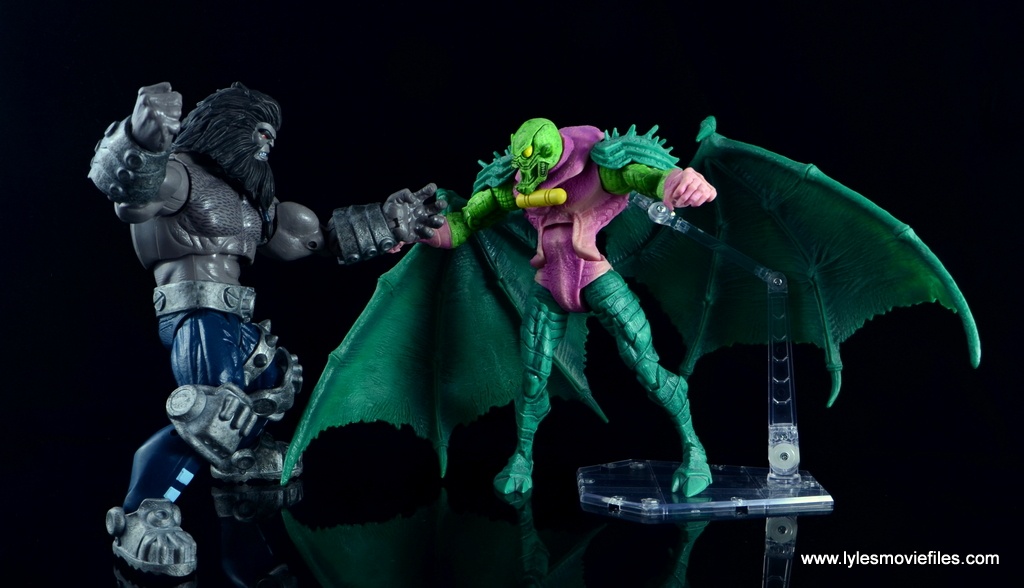 Where to get it?  At this point, Amazon is the best way to get this set or the figure you need. At the very least track down Gladiator and Blastaar.