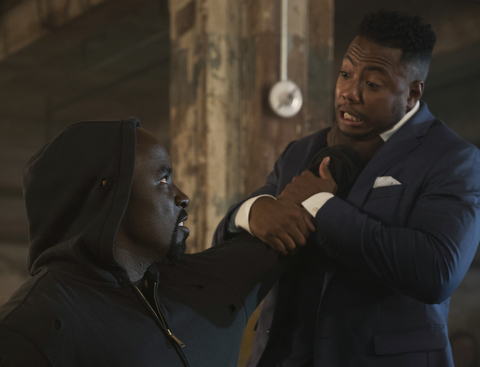 All Souled Out was a bit of a set up as it seemed like it was going to be another progression episode without any big events. Then that final 10 minutes arrived and definitely shook things up for the rest of the season.

Cockroach was suing Luke and wants $100,000 to avoid a nasty court case that could send Luke back to prison. In lieu of Hogarth, Foggy is representing Luke, which proves to be a fun partnership this episode. The unexpected benefit of taking Claire and Bobby off the board at this point of the season is Luke has to interact with different characters.

After a string of awful propositions, Luke begrudgingly accepts the appearance gig Foggy tracked down. In a twist it’s Mariah’s investor, Piranha (Chaz Lamar Shepherd), who’s also a huge Cage mark.  Luke reluctantly agrees to the gig for $150,000. This is the most obvious nod to Luke as a Hero for Hire. Piranha wants Luke to wear a costume. Sadly it’s not a yellow shirt and tiara, but his original shot up hoodie. Booo.

While Cage can’t go after him, Misty still wants to take down Cockroach. With her new prosthetic arm, she’s almost as good as new now. But Cockroach is slippery even flaunting he’s faking some of his injuries he alleged Luke caused. When he beats Drea up again, Misty is tired of playing by the rules and simply wants to see that Cockroach gets squashed. This train of thought leads her to recalling conversations with Scarfe, her old mentor/partner.  I really liked Frank Whaley last season and this was a smart way to bring him back. Is Misty willing to break the law to ensure Cockroach gets what’s coming to him? Or maybe someone will beat her to it?

Mariah lets Tilda in to everything. From how she blackmailed Mark Higgins to sell controlling stock in his company to selling the guns to go completely legit. This might have been the most sincere thing Mariah has done in two seasons. And it’s only partially motivated by Mariah wanting Tilda to be the medical director of her new complex.

It all comes to a head (pun intended) at two parties. Piranha is showing his tail being super obnoxious and treating Luke like a trophy and a wing man while he talks to some hot models.

Mariah meanwhile is also peacocking at her center’s grand opening. I love how Alfre Woodard plays Mariah with just a touch of a street edge. It’s like Mariah isn’t quite as refined as she tries to convey. And things get even better for her as Tilda arrives, fully committed to her mother now. But Mariah’s got a trio of uninvited guests — namely the heads of Mark Higgins, Ray Ray and Cockroach. I’m stumped on what worst best here: Worst Opening Ever or Grand Opening, Grand Closing. You decide.

Bushmaster’s guys are also going after Piranha. But his goons are no match for Cage. If Piranha wants to hire this hero, the price just doubled.

Now that’s an effective way to introduce a key component of the character. All Souled Out had more strong character work and a shocking finale that will have major repercussions as the season unfolds.

Best Quotes of the Episode:

Yeah, you know there’s still some people that think Shock G and Humpty Hump are different people. — Foggy in trying to convince Luke to wear a mask.