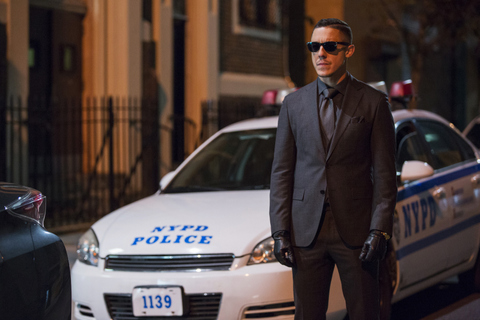 To put The Creator in full perspective — the character who was cutting heads off earlier this season isn’t even the biggest villain. Mariah has lost all traces of decency and loyalty  while removing any last shades of grey. And right in the middle is Luke and Misty hoping to prevent the next salvo of an ever escalating war.

In all the carnage of The Rum Punch Massacre, Mariah’s men missed a survivor — Bushmaster’s Aunt Ingrid. Now it’s time for a woman hunt and even Karen Page wants in on the scoop. Pulled in both directions, Misty assumes a command role and deals with the press while pleading with Luke not to ruin her case. She’s got one good lead with the unique shell from Mariah’s gun. After some digging, she finds it’s the same one that killed Uncle Pete. But Scarfe worked the case so it’s no good. Scarfe really screwed Misty over, didn’t he?

Mariah continued her passive emasculation of Shades by sending him out to clean up her dirty work. She needles him that she notices this conflict and fear. Has Mariah just become a Sith Lord? This relationship has frequently felt imbalanced, but now Mariah wants full control. With a new safety room/vault, Mariah’s feeling good, but Shades knows this won’t stop Bushmaster after the incident at Gwen’s.

There’s a rare misfire this episode as Mariah starts having a conversation with Mabel and Pete. It’s supposed to convey how unhinged Mariah has become, but that was abundantly clear earlier.

In a flashback we see Bushmaster’s childhood in Kingston in the mid-80s. This isn’t some random moment in time as it’s when Mabel, Pete and young attorney Donovan are trying to come to peaceful terms with Bushmaster’s mother, Gwen. Cornell and Mariah are also there and Mariah dismisses the boy who will become Bushmaster to fetch her a towel.

As a child, when doctors came to give mysterious vaccinations, only Bushmaster survived. That didn’t help him when Mabel’s men burned his home along with his mother. Mabel waltzed right by him to put some of Gwen’s paperwork connecting them into the fire. Geesh, the Stokes are some terrible, cruddy people.

Correction, they’re even worse as Pete returns a few months later and guns down Bushmaster. They’re just straight up awful. Uncle Shelton took Bushmaster to a priestess who uses nightshade to heal him. The legend of Bushmaster would only grow from there. Considering so much of his childhood was ruined by the Stokes it’s amazing Bushmaster had this much restraint to not go after her earlier. After seeing the carnage at Gwen’s even Bushmaster is speechless. He does let Tilda go as he understands she had no idea how cruel her family was until now.

Luke tracks down Ingrid, but turns for just a second and Shades has her. But Shades isn’t the same cool customer as before. Killing Comanche and all of the bloodshed at Gwen’s has affected him and he doesn’t kill her. Shades understands he’s being phased out as he catches Mariah flirting with Alex.

For as dirty as Shades has been he’s always had a code and Mariah is breaking all of his rules. Then Mariah goes super low by mocking Shades’ prison relationship with Comanche. That’s his breaking point as he starts throttling her before regaining his composure. The list of people who want to do that to Mariah gets longer every episode. Tilda seems close to joining the list when Mariah defiantly boasts about her hand at the Gwen’s massacre. Instead, she just walks off.

Shades might not want to kill her, but he isn’t done with Mariah yet and he’s willing to get arrested by Misty to make her pay.

Bushmaster is with his uncle’s body when Cage and Ingrid arrive. She doesn’t want them fighting again and after everything that’s happened the last few episodes, I’m down with them just talking too. There’s a certain sadness Bushmaster has this time in suggesting he and Cage could have been brothers in another setting. They both would do anything to protect their loves ones, but Bushmaster has far more extreme measures. It’s almost too bad as they have the same sense of duty and obligation.

Sugar finds Cage and is down with helping to take down Mariah. Harlem doesn’t need a sheriff. It needs a king.

The Creator really lined up all of Mariah’s enemies. She’s worked hard to earn them though so she deserves everything coming her way.