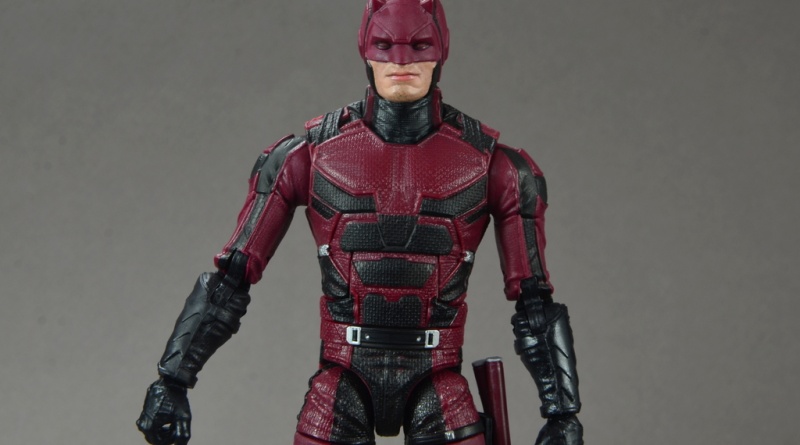 I have a mild enough appreciation (and enough BAF parts) of Man-Thing that I decided to go ahead and get the Marvel Legends Netflix Daredevil. Well, that and a clearance sale at Target balanced out getting the BAF part loose. I’d already gotten the Hot Toys Netflix Daredevil so this is a rare double dip for me. Let’s see if this is a figure only a blind man with radioactive senses could love.

Packaging:  Surprise! No big changes from the standard Marvel Legends packaging. The Netflix color scheme is black and red, which isn’t as exciting as some of the other combinations. 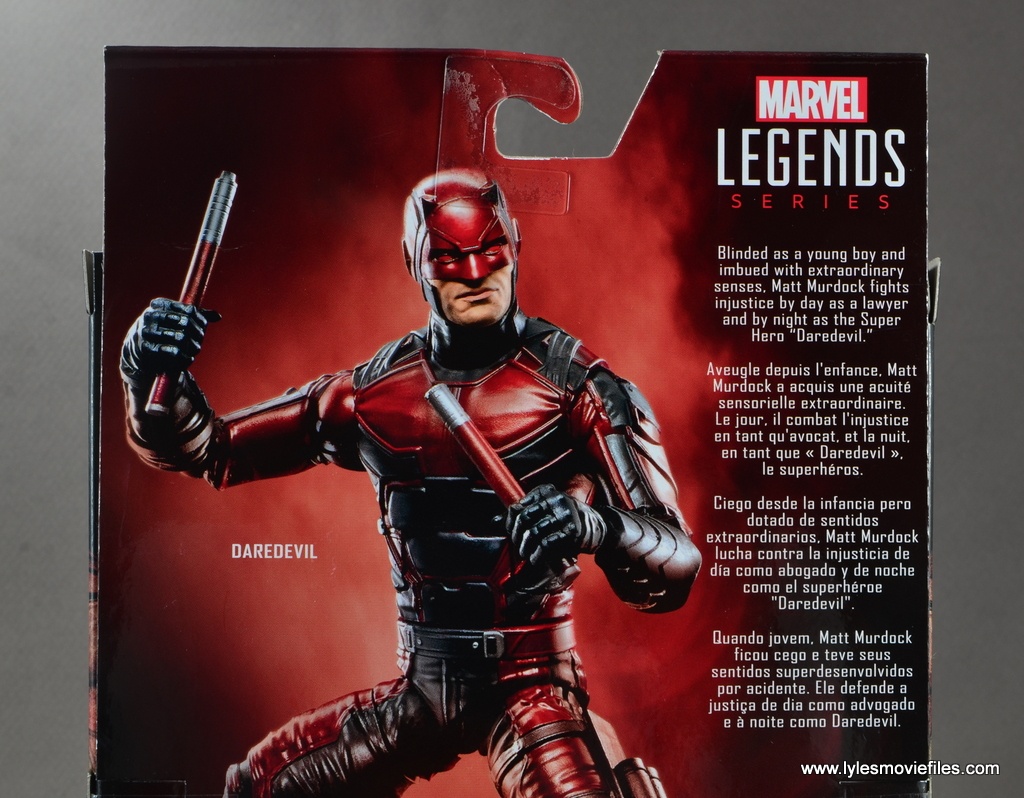 It especially doesn’t help in Daredevil’s case as he blends in with the red interior. The portraits on the side look so cool I kinda want to see this look in the comic drawn by Alex Maleev. The bio is perfectly acceptable and sums up the character perfectly. 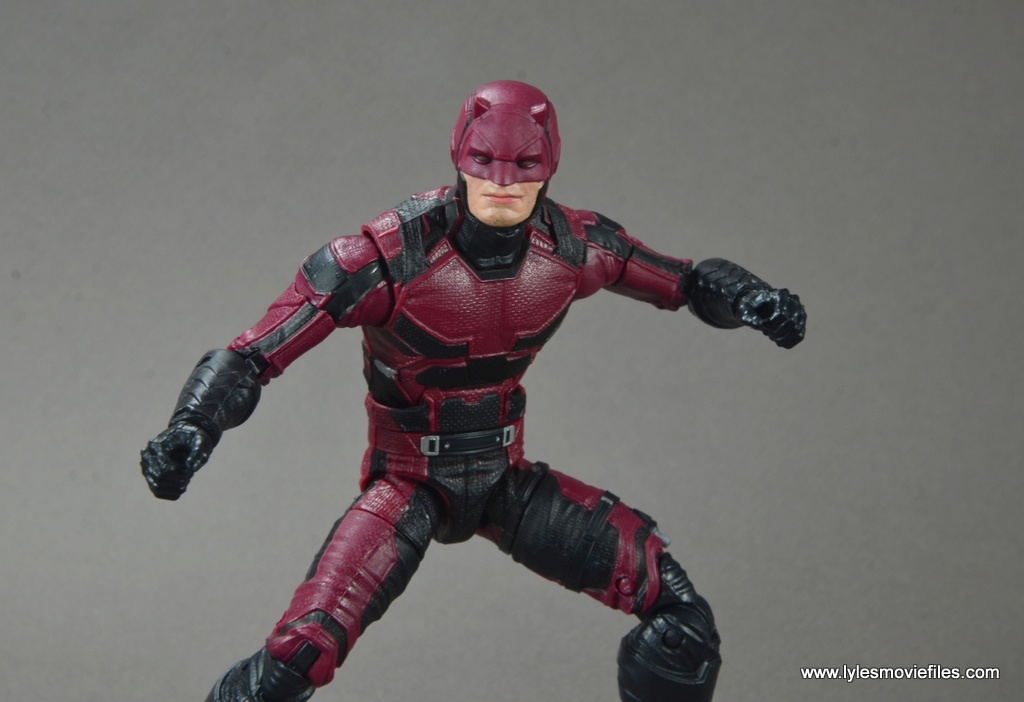 Likeness:  Granted only the mouth and jawline are visible, but I’m struggling to see the Charlie Cox likeness here. The mouth is too wide and the expression looks more pained than intense. With so much of Daredevil obscured that expression is important and I think Hasbro is just a bit off here. 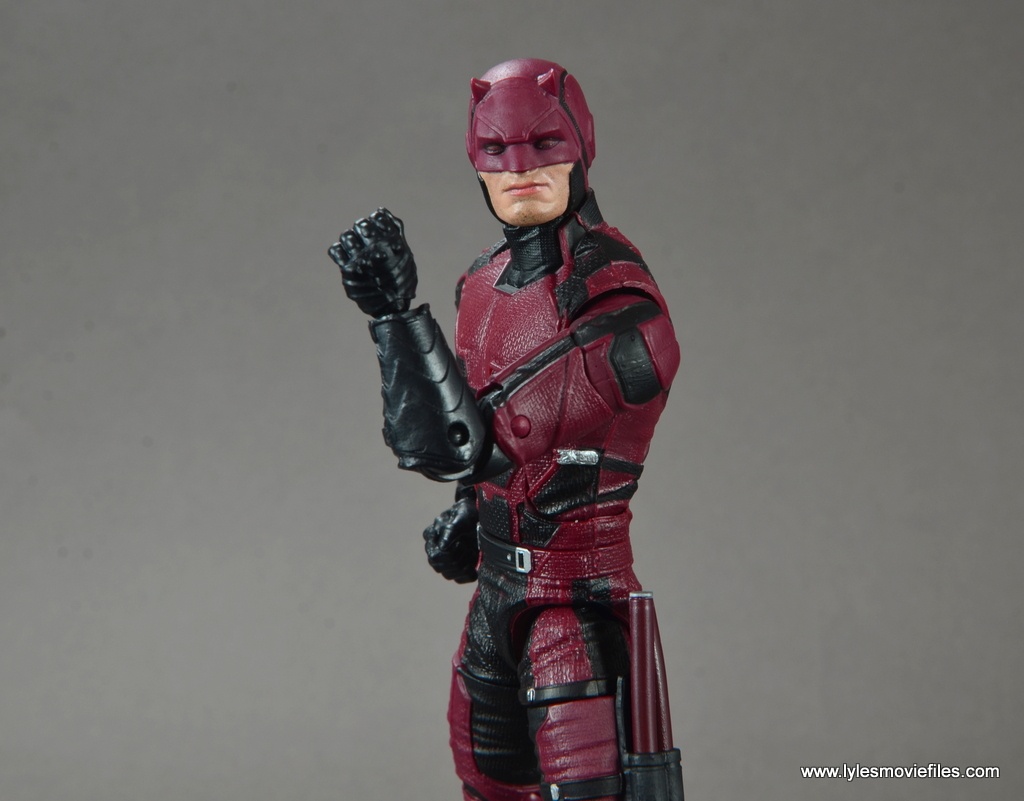 The rest of the figure is a big win however. From the intricate paneling on the mask to the layers on the outfit and the overall texturing, this is a great figure translation of this attire. It’s still a little busy to me, but that’s a fault of the design, not the execution of the figure. 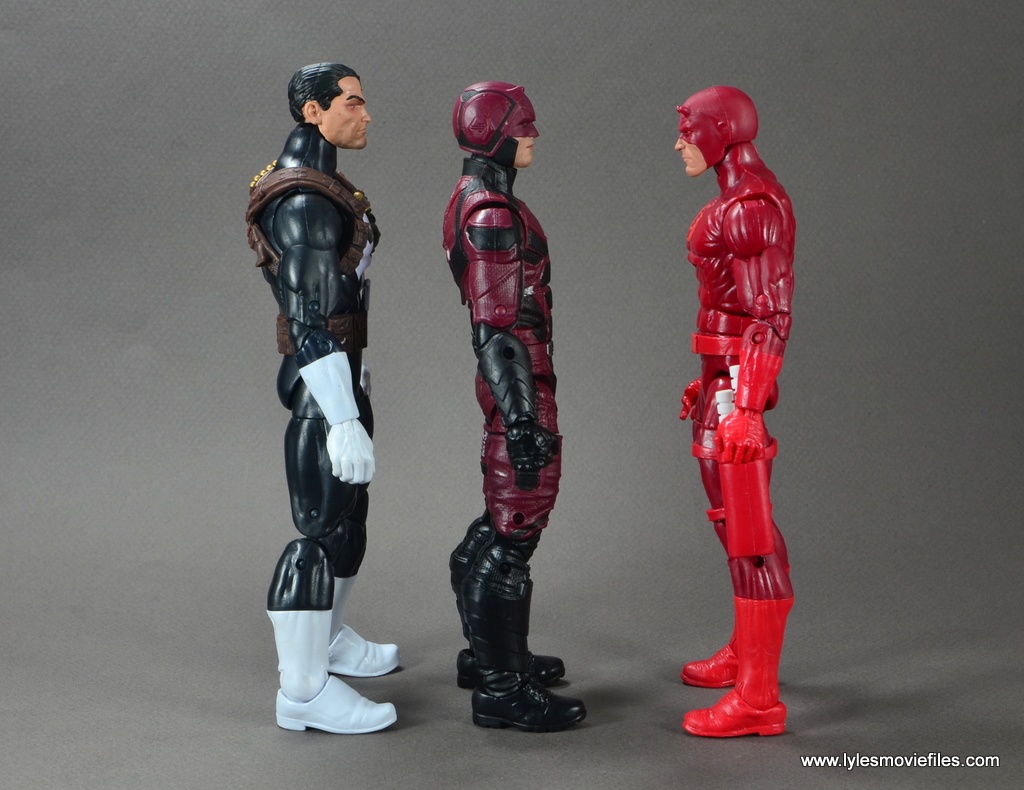 Scale:  Netflix Daredevil might have a slightly bigger head, but that’s about it. Otherwise he fits in very nicely with other MCU Marvel Legends figures.

Paint:  Again the visible skin portion is somewhat problematic. The lips are painted too deep and the attempt to get Cox’s stubble down didn’t work at all. The figure sports more of a dirty face than unshaven look.

There are just a few random spots where the paint on the outfit didn’t come out sharply, but considering the paneling and small buckles — that turned out flawless — I won’t complain. 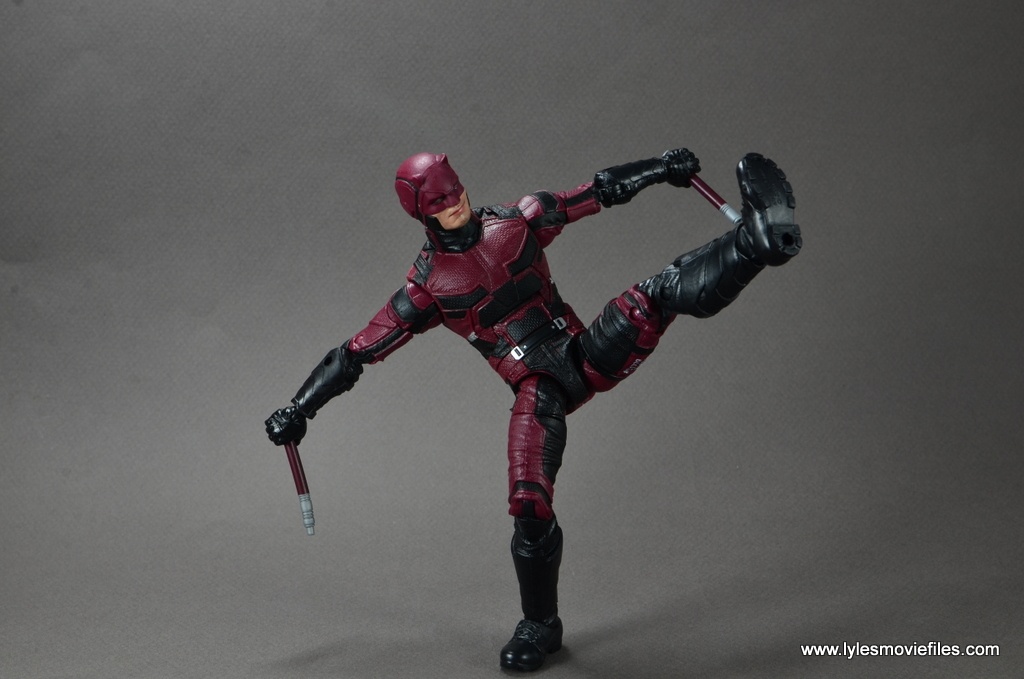 Articulation: You know what to expect from a Marvel Legends figure and that carries over with no trouble here. The fun as always is trying to get as creative as possible with posing. There are no limitations on that front save your imagination. This is where it’s a nice thing that Hasbro also included a Netflix Punisher to have someone for him to square off against.

The figure has clickety style articulation in the knees and shoulders. This doesn’t hinder movement, but isn’t as fluid as other figures. Also, the softer plastic makes it so Daredevil won’t be able to hold poses for an extended amount of time. 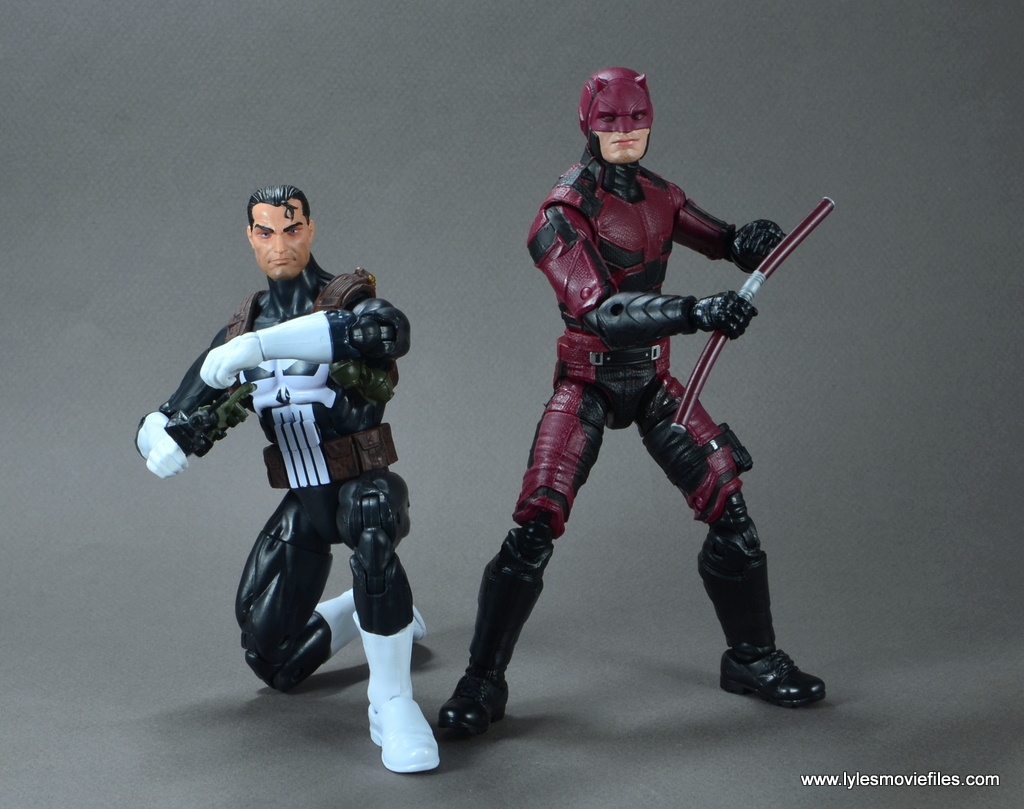 Accessories:  Hasbro has really committed to packing more accessories. In this case we get an alternate set of fists. I wish that was the norm with figures that use weapons. It definitely helps with posing variety. I do wish we’d gotten an unmasked head sculpt too.

Daredevil also comes with batons. Unlike the comic versions, which look a bit cheap, these have great detailing and have a nice maroon and grey color scheme. Looks like my comic DD is about to get an upgrade. 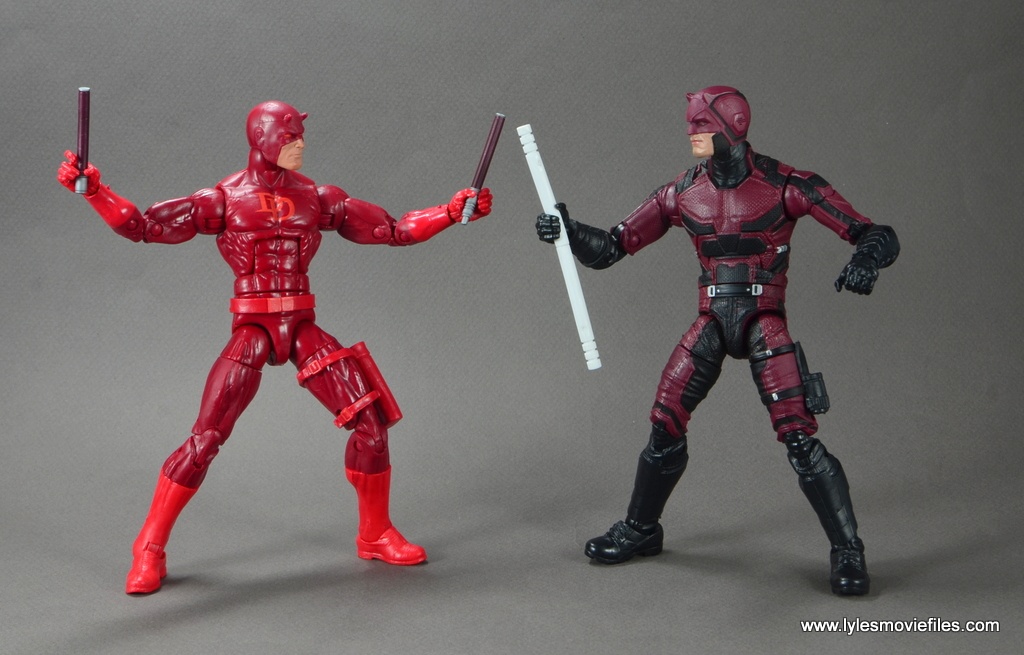 Additionally, Netflix Daredevil comes with the all important head of Man-Thing. Everything else is worthless without it. 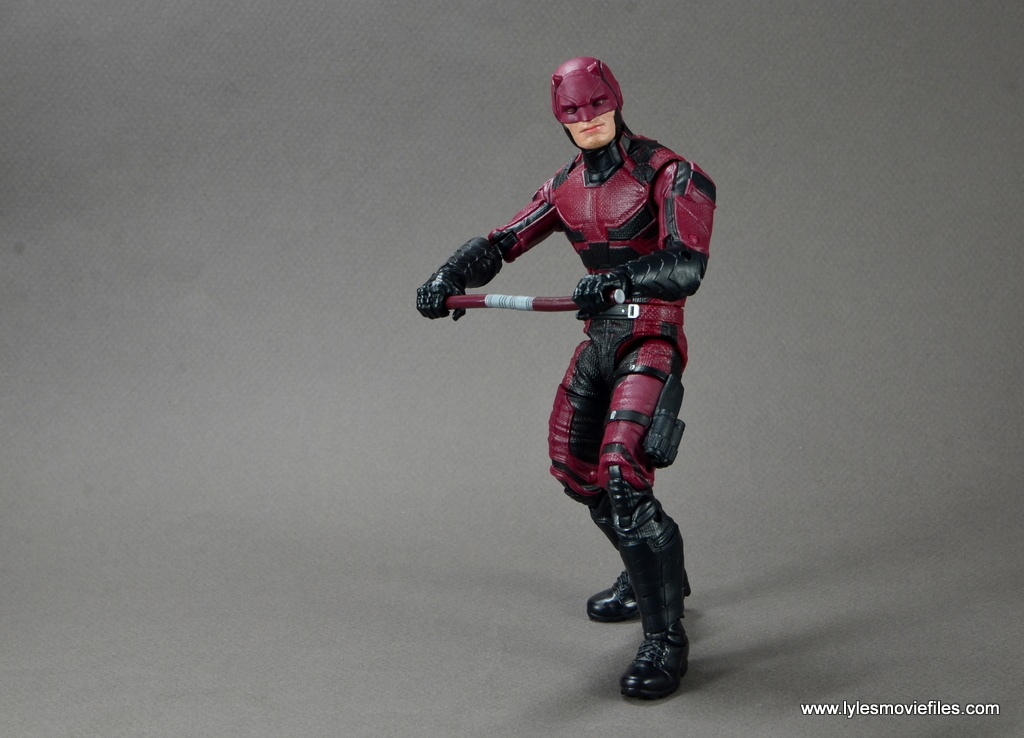 Worth it? I got a pretty high quality figure with some useful accessories and a necessary BAF part for $10. It’s hard to complain about the value on this one.

This is a pretty solid figure and a nice representation of the Marvel Netflix Daredevil. The detailing is top notch, but the Charlie Cox likeness isn’t obvious from the chin portion and the waxy chin paint job is also an issue.

Where to get it?  Check Target first since they still have this line’s remnants and restocks in some cases. Wal-Mart has been hit or miss with Marvel Legends for awhile. You can check out Amazon or Entertainment Earth.