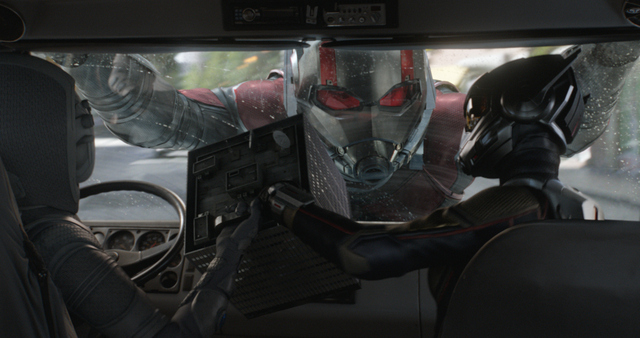 Ant-Man and The Wasp proves the only thing Marvel Studios is serious about these days is consistently cranking out great movies.

It’s not going to make a gazillion dollars like the two most recent films, Black Panther and Avengers: Infinity War, but Ant-Man and The Wasp is every bit as successful in its niche as its predecessors. With this film, Marvel Studios has its PG-13 answer to Deadpool with its most hilarious and fun film yet. 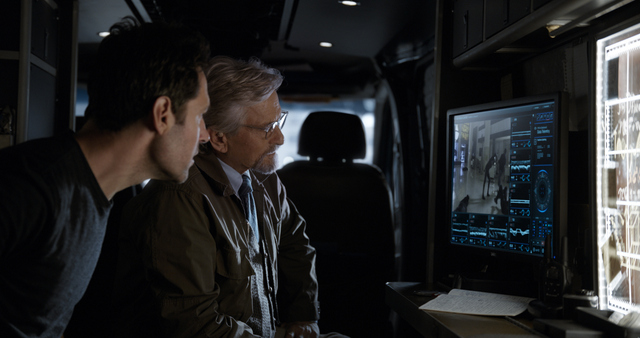 In rushing to answer Captain America’s call during Civil War, Scott Lang (Paul Rudd) made a mess of things. While he was acting for the greater good, his choices left some major consequences for his loved ones as he’s on house arrest.  At least Scott can rely on his unconventional family unit of his daughter, Cassie (Abby Ryder Fortson); his ex-wife, Maggie (Judy Greer) and her husband, Paxton (Bobby Cannavale).

It remains wholly refreshing that Scott and Maggie are friendly exes and that Paxton’s potentially slight tinge of jealousy is played for comic relief instead of forced drama.

Scott’s actions also screwed over his allies Hope Van Dyne (Evangeline Lily) and Hank Pym (Michael Douglas) who are now fugitives. That effectively killed off the budding romance between Scott and Hope, but when Scott starts seeing visions of Hope’s mother, Jan (Michelle Pfeiffer), Hank is ready to get the band back together. But this time Scott won’t be doing it alone as Hope now has powers as The Wasp. 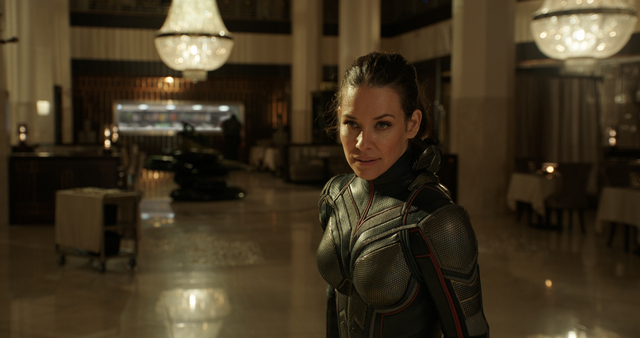 Lily is fantastic in the role and she makes Wasp stand out from heroines like Black Widow and Scarlet Witch. Hope’s got the kick-tail attitude and superior fighting style, but often leads with her emotions. That’s a fun character and Lily pulls it off beautifully. I’m already looking forward to seeing how The Wasp will interact with the other Avengers. It doesn’t hurt that she’s got strong chemistry with Rudd. Also providing some assistance is Hank’s former research partner Bill Foster (Laurence Fishburne).

Saving Jan won’t be that easy as the wraith-like Ghost (Hannah John-Kamen) wants the same technology Hank needs to find Jan. Like all of the Phase III films, Ghost doesn’t neatly fit into the cookie-cutter villain mold. John-Kamen makes Ghost an intriguing and at times sympathetic character. I love how the MCU villains are so complex and their actions make sense even if they don’t choose the best method to accomplish their goals. John-Kamen and Fishburne make terrific additions to the cast as does Randall Park who plays Scott’s FBI handler Jimmy Woo. 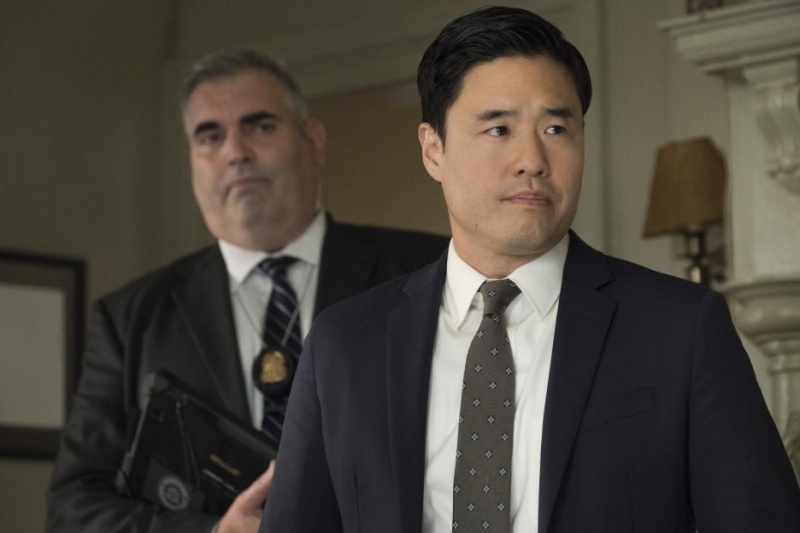 All of the elements that made the first film click return this installment including an expanded role for scene stealer Michael Peña’s eclectic motor mouth Luis. One of the film’s highlights is a verbal face off with Peña and Walter Goggins, who plays an equally talkative sleazy bad guy. It’s one of those pairings that makes too much sense not to have in the film and like moments, it delivers big time.

Misdirection is a major theme of the film and it’s not just related to the running gag of Scott’s magic tricks. After Marvel Studios’ biggest buzzkill ending film with Infinity War, going the comic book comedy route seems like an odd detour, but it works. This was easily the biggest change in tone from one film to the next, but it shows the spectacular versatility of the Marvel Cinematic Universe.

Despite the top billing, the sequel really isn’t Scott’s story. He’s called back to action to aid Hope’s agenda. What’s smart about this is Marvel Studios found an organic way to make a female-focused story without making Scott look ineffective or unnecessary. Ant-Man is every bit the great character he’s been since his first solo film and he shares the spotlight easily. 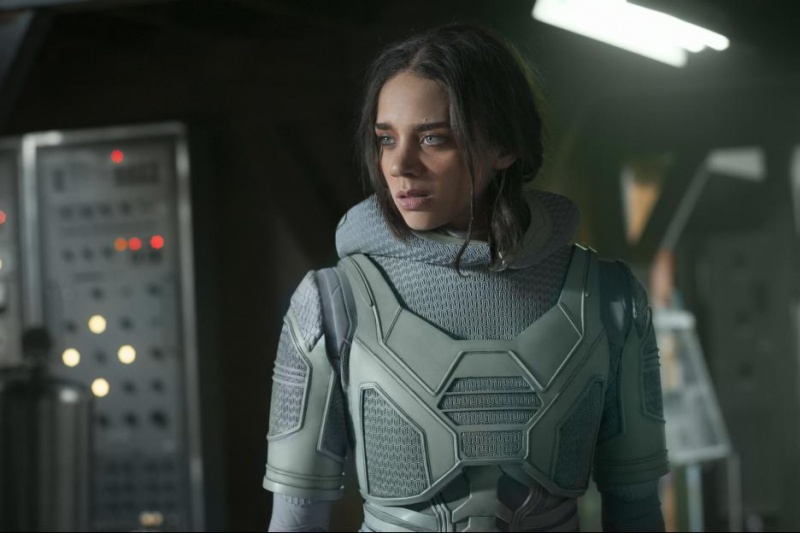 For comic book readers, The Wasp is not just a founding member of The Avengers, but one of their longest tenured leaders. Wasp has been long overdue for her moment in the cinematic spotlight. Although it took way too long, Wasp’s debut is just as satisfying as the MCU arrival of Black Panther and Spider-Man.

While the characters are different from the source material, Director Peyton Reed does an amazing job of capturing the dynamics of Ant-Man and Wasp’s partnership on the big screen.

Reed took full advantage of Ant-Man’s powers, but with the ability to play off Wasp’s aerial fighting style and Scott’s size changing abilities as Giant-Man, the film is even more fun and unpredictable. There’s just something inherently fun about a character who can grow as tall as a skyscraper one moment and then ride on ants the next. Ghost’s powers also come off very cool and there’s no let down with the special effects at all. Of all the stunning effects, the most impressive remains the Marvel Studios de-aging CGI as some of the cast look like themselves from 20 years ago.

The script, credited to five screenwriters including Rudd, doesn’t come off like a stew with everyone tossing in something. It’s consistent, true to the characters and really funny.

Don’t worry, the events in Infinity War are addressed in a way that’s every bit as shocking as you’d expect. There’s two post credit scenes in this one. The first is the one worth sitting in the theater for while the other makes for a fun treat when you re-watch the film on home video. 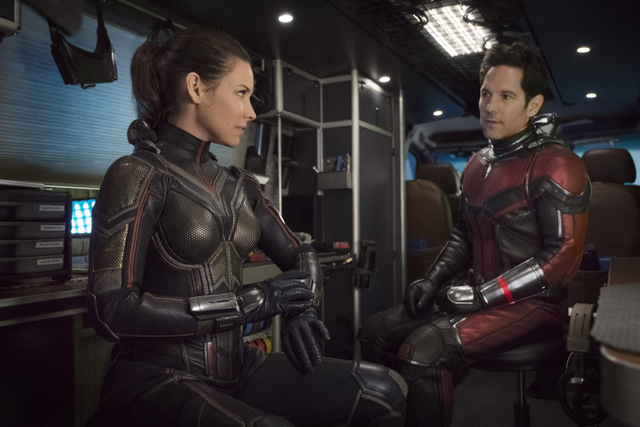 Ant-Man and The Wasp delivers giant sized laughs, fun thrills and was a perfectly timed chapter of Phase 3 to lighten up the mood for MCU fans.