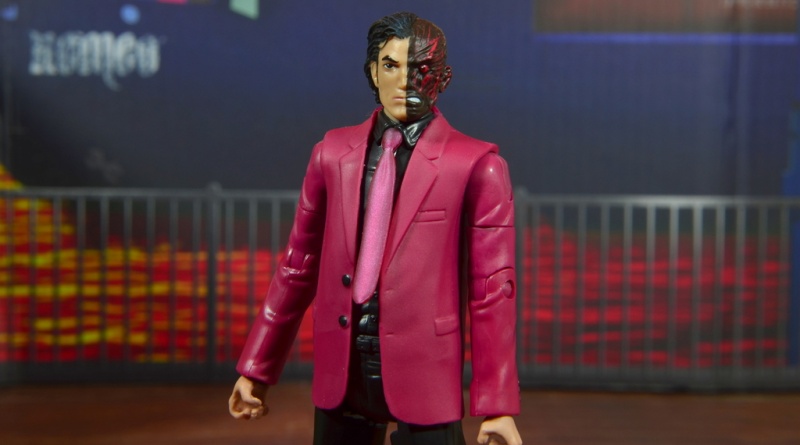 I was cautiously optimistic when DC announced DC Rebirth. New 52 never really clicked for me, but Rebirth seemed to be a focused effort to correct the reboot. I’m glad I gave it a chance as Rebirth has provided some of my favorite stories from DC in years. Two of my favorite titles have definitely been Rebirth Superman and Action Comics.

After a few false starts at relaunching the DC Classics line, Mattel went a revamp of its own with DC Multiverse with a Rebirth focus. Distribution of this initial Rebirth wave has been …challenging, but I was thrilled to get the Rebirth Superman from Amazon. Let’s see if Mattel has sufficiently stepped up its game to be the equivalent of Marvel Legends DC collectors have envisioned.

Packaging:  I’m a sucker for blue as it really stands out among a sea of red and black color schemes on shelves these days. I like the layout of the packaging as well with the angles and recessed lower half.

In another really nice touch, Mattel went with artwork from the comic the figure is based on so in this case we get John Romita Jrs’ version of Two Face from All-Star Batman. That’s also reflected in the bio write-up as well, which labels this as All-Star Batman Two-Face. 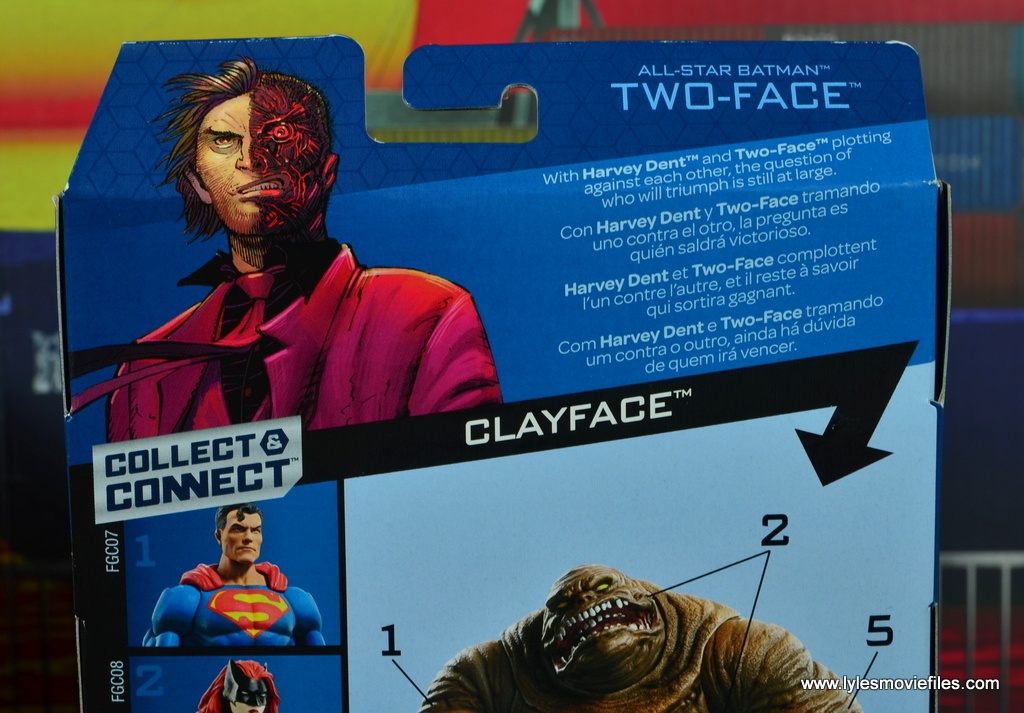 The back has a better layout of the Collect and Connect and who comes with what piece or pieces in this case. Maybe Mattel could use a tad more white to mix up from the blue a bit, but otherwise this packaging is really well done. 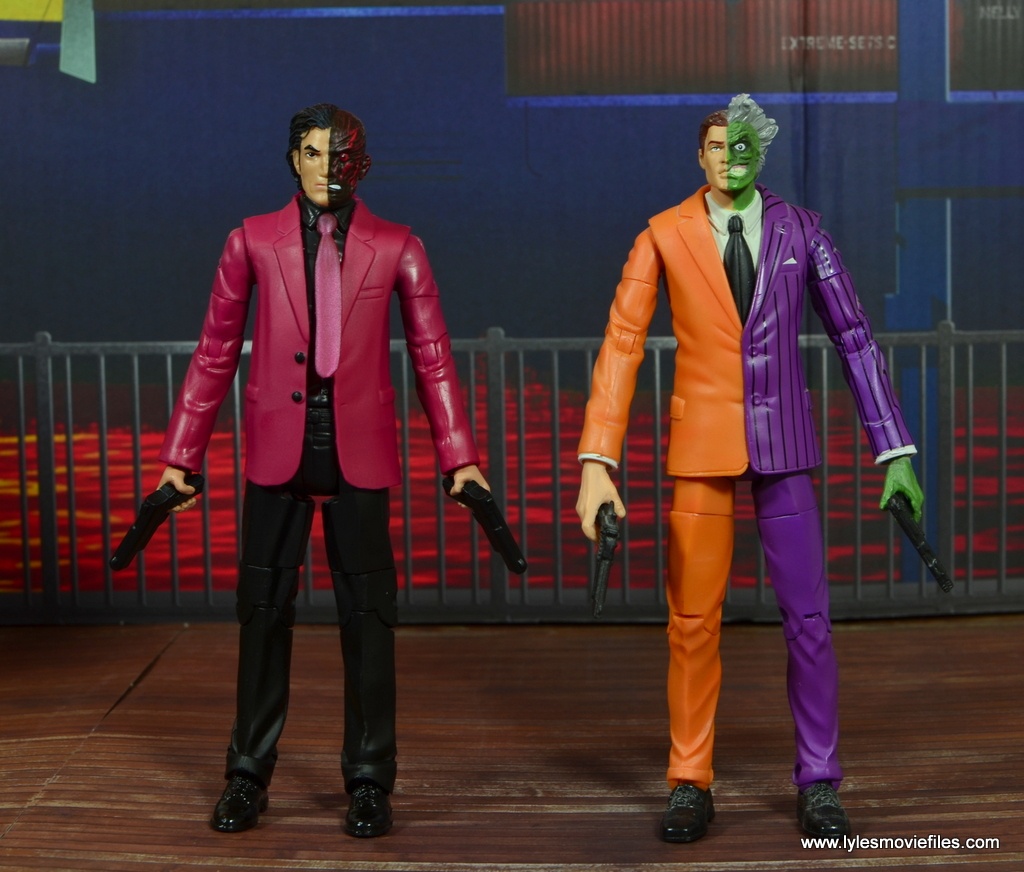 Likeness:  Short of adding in all the cross-hatching Romita Jr. adds to his characters, this is a pretty decent representation of how Two–Face looked in All-Star Batman. I like the head sculpt, which does a good job with the Harvey Dent/Two-Face transition and comes close to capturing the package art. In reusing the old suit mold, Mattel couldn’t add in the prominent vest Harvey wore in this arc.

That brings up the biggest issue with the figure. While this isn’t exactly a relaunch of the Multiverse line, this was the ideal time for Mattel to scrap some of the outdated molds and kick off this series with all-new molds or improvements to existing ones. We don’t get any of that with Two-Face as he’s using the same overly slight suit body that’s been used for years. Harvey isn’t a linebacker, but he doesn’t need to be this slim unless Arkham isn’t keeping up with the feeding schedule. 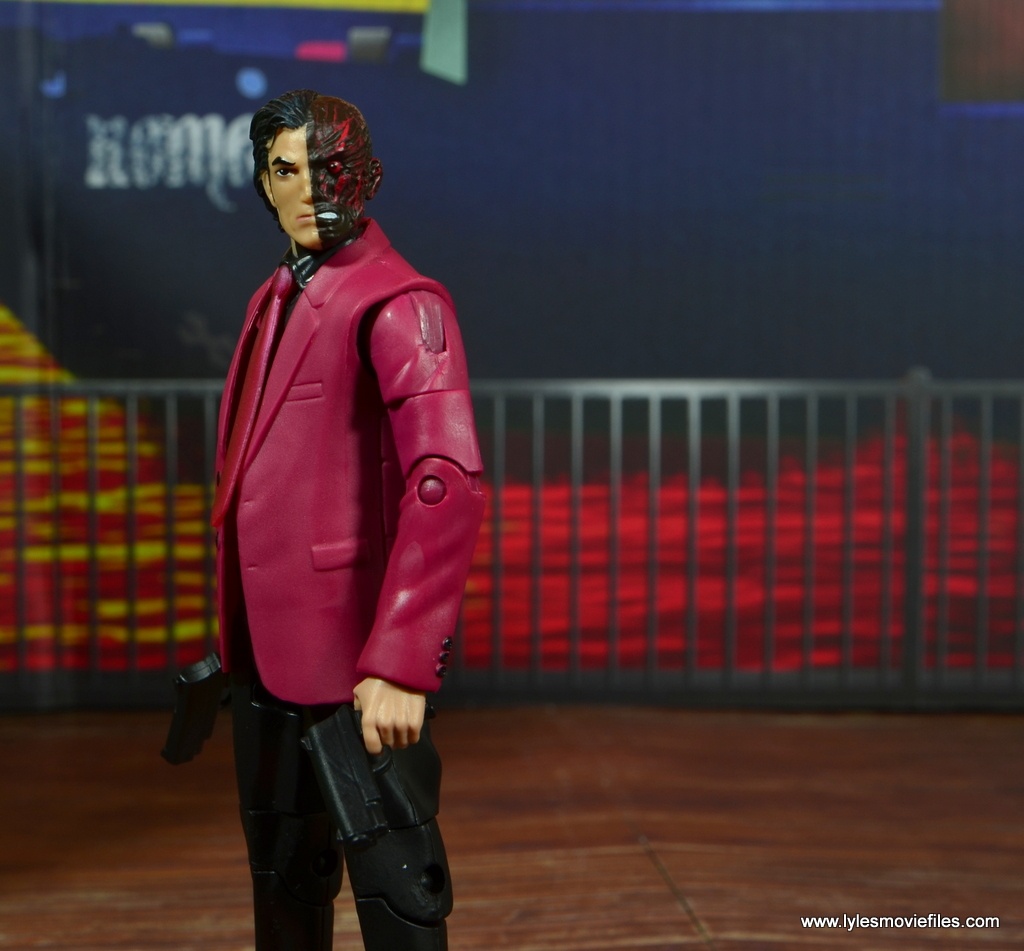 Scale:  Two-Face should be looking eye to eye with Batman. I’m waiting on a better Rebirth Batman from Mattel to do a real scale comparison, but he’s appropriately shorter than Superman. 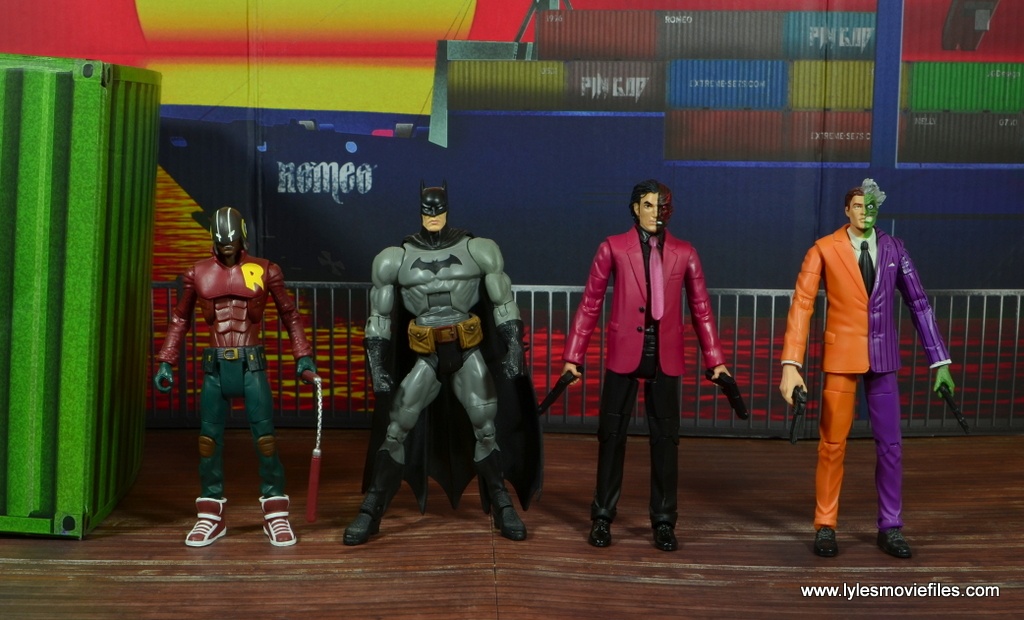 Paint:  My figure only had some slight paint issues on the lips as they don’t match up to the sculpted ones. Everything else looks nice and clean without blemishes. My problem is more with some of the paint choices. Basing figures off specific comic looks means it’s important to match up all the important areas.

In this case, the hair should be brown and not black. Going that route also calls into question the scarred side of the head, which should be more red with a darker red wash and some faint traces of black. Mattel just went with black with red accents and the effect isn’t as nicely executed. 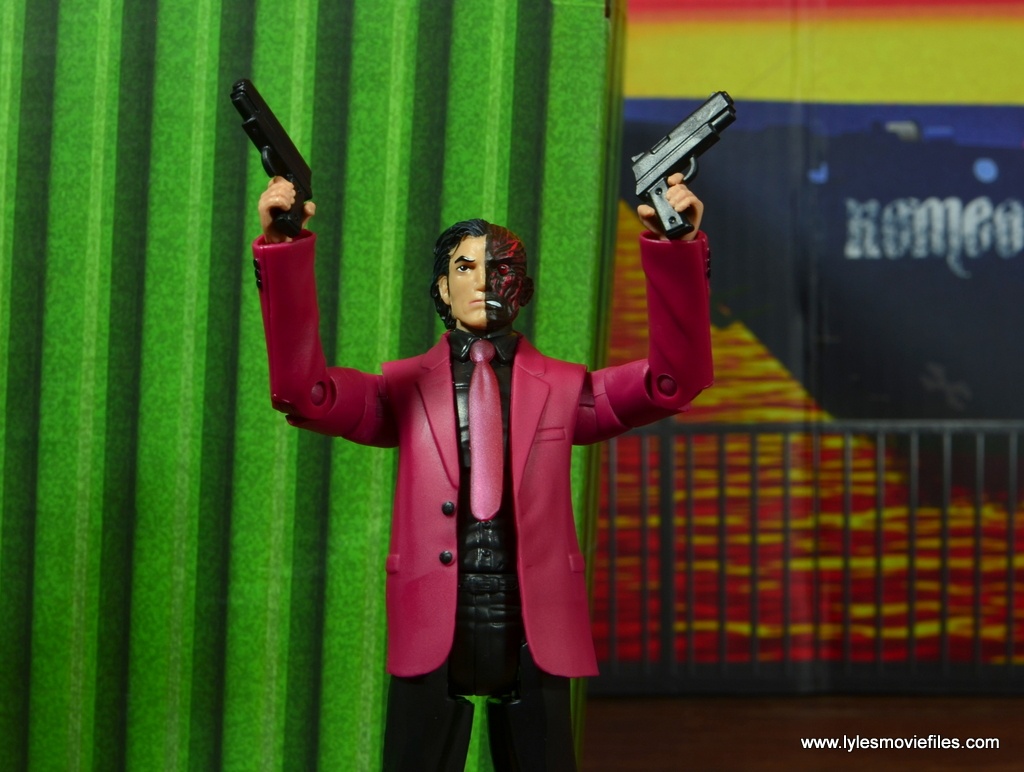 Articulation:  As an older body, this suit mold suffers from some underwhelming articulation. I definitely missed the double jointed elbow and knees. Considering some of the figures in this wave have better elbow and knee joints, this is a disappointment especially since Mattel isn’t giving us customers an old mold discount. The hinge shoulders and hips really feel like relics from figures from years past. The neck range is also not great so Harvey can’t look up or down too much. 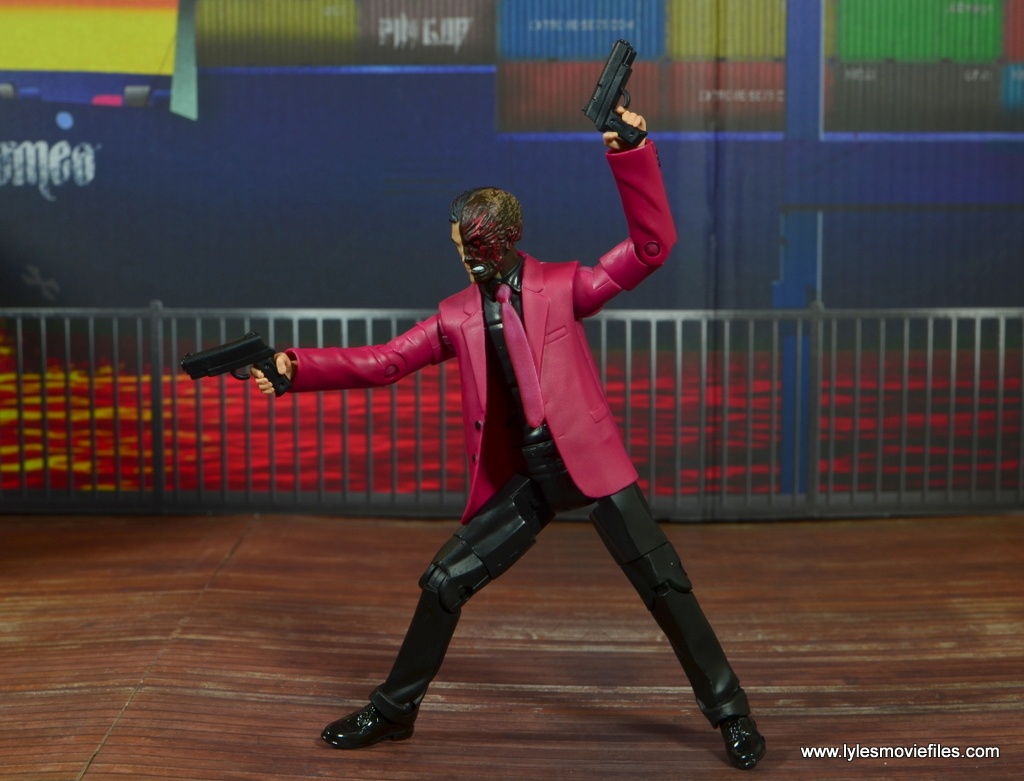 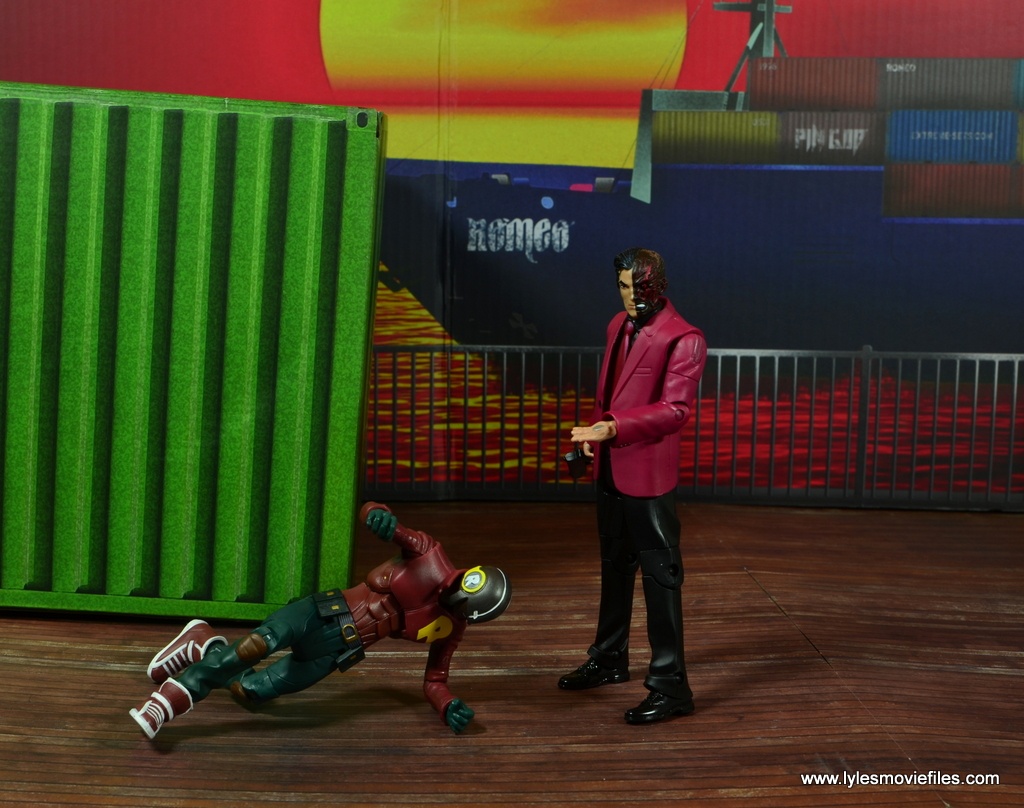 Accessories:  Here’s where Mattel tries to make good for the articulation issues. I’m curious if this was intentional or just a fun coincidence, but Mattel played into Two-Face’s theme by giving him three pairs of accessories. There’s two pistols, two Clayface Collect and Connect pieces and two coin hands. I’m probably reading into that, but it’s cool.

Don’t expect too much out of the guns. They’re simple and basic issue without a ton of detail, but they look the part. The hands are my favorite accessories as we get a clean and a scarred coin. This plays into Two-Face’s internal struggle and instrument to play judge, jury and executioner.  For Clayface, we get the torso and waist. 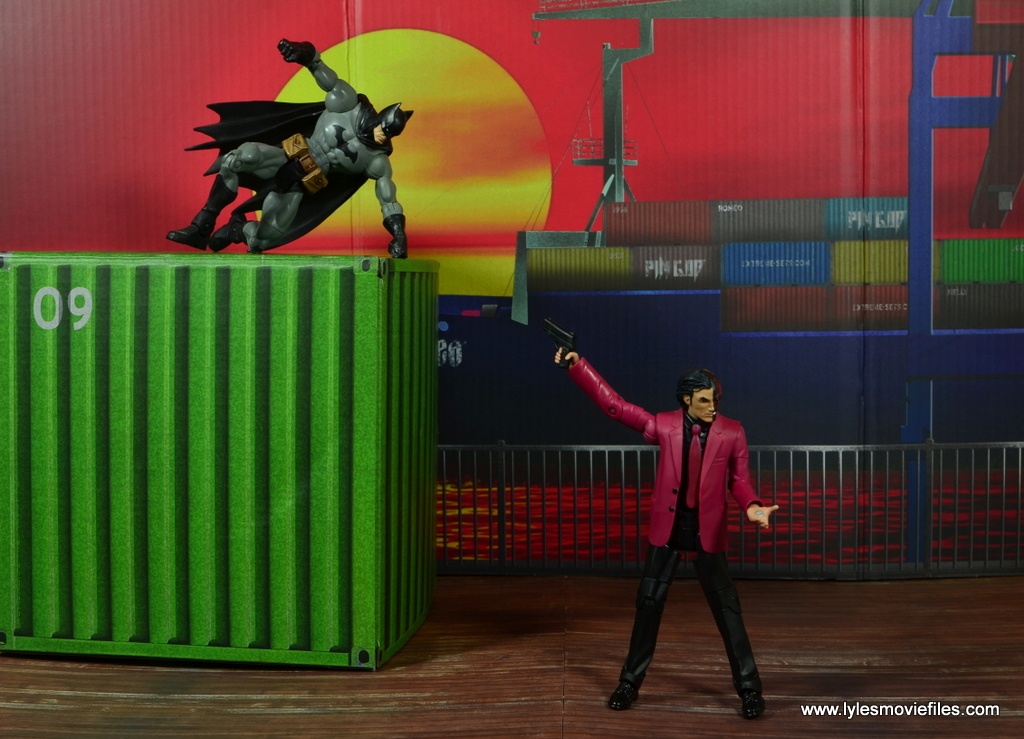 All of this stuffed into the package makes for a pretty impressive presentation and you see what you’re getting for $20.

Worth it?  For years, the DC figures didn’t quite equal out to their Marvel Legends counterparts. That divide is closing though even with Mattel’s bad habit of occasionally going to older bodies.  I wouldn’t pay the secondary mark up price of $50 for this guy. 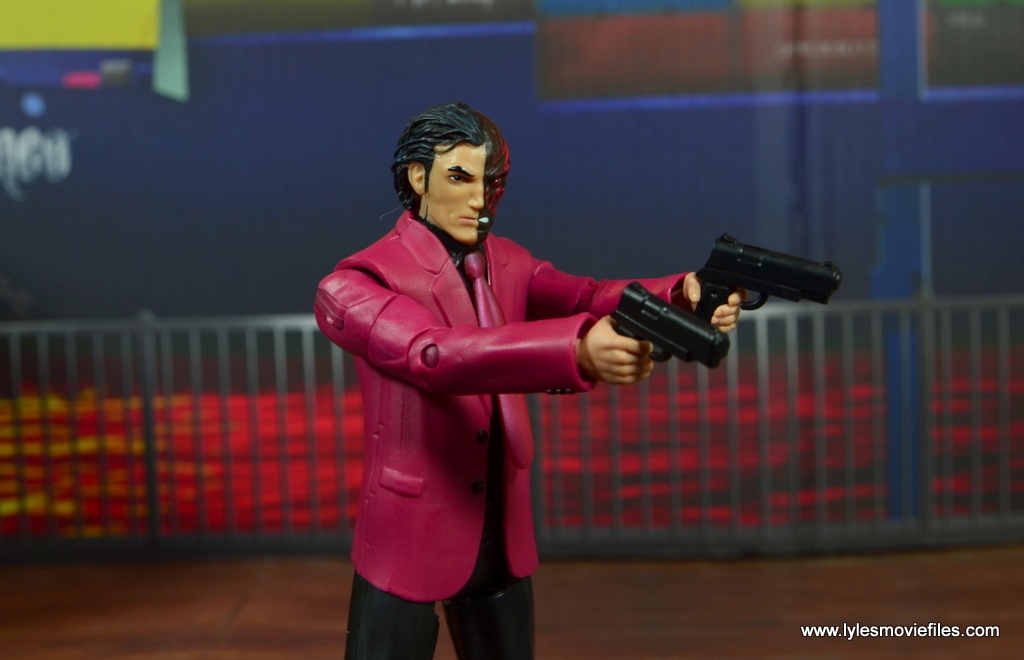 A better paint job and new suit body would help this figure a lot. It’s still decent, but not nearly as exciting as this figure could have been. 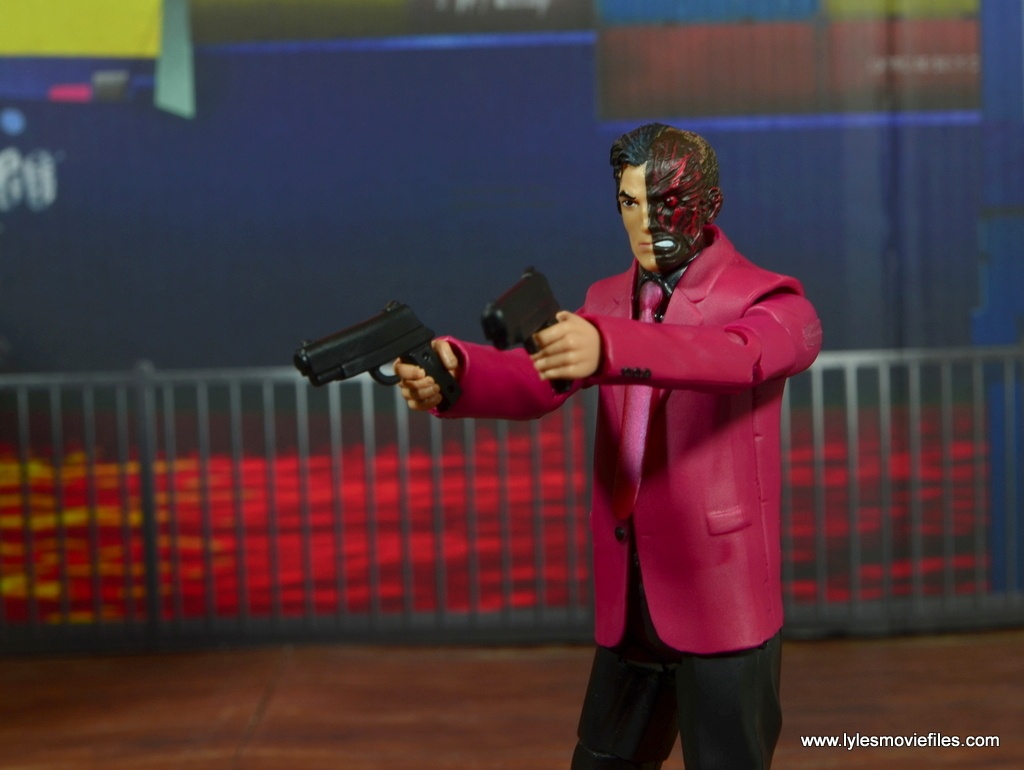 Where to get it?  Mattel has made these figures a bit of a scavenger hunt. The best bet at this point is to give Amazon or Big Bad Toy Store a shot.