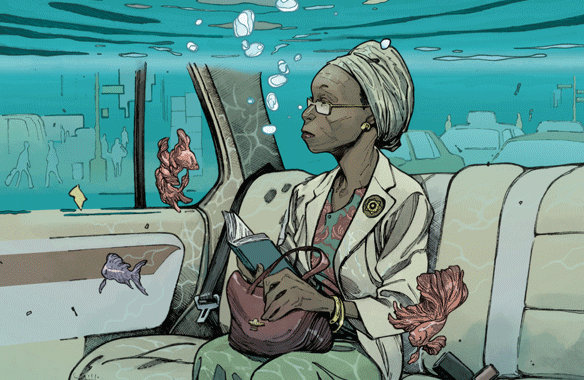 The Magic Order #2 easily avoided a sophomore curse with another strong issue of one of the most intriguing books on comic stands today.

With more of their peers being killed off by Madame Albany and crew, Leonard Moonstone and his allies start planning a proper course of action. But by the time they make a firm decision, more of their ranks won’t survive the night.

Writer Mark Millar isn’t going for a slow burn here. There’s an immediacy to the story, but Millar is pacing the story well enough to allow for some fantastic character development. My only complaint at this point is that Millar introduces some seemingly interesting characters before quickly killing them off.

Clearly they’re just meant to be background and cannon fodder characters, but in a short amount of time, Millar makes them intriguing. Maybe he’ll provide some backstory in flashbacks or prequel stories? That I’m so invested in background characters is a testament to the strong character work Millar has accomplished in only two issues.

Like the first issue, Millar focuses on one member of the Moonstone family. This time it’s Cordelia, the black sheep of the family, whose origin is anything but traditional. I love how Millar keeps finding inventive ways to incorporate magic in this story. That goes double for the assassinations by Madame Albany and her gang.

There wasn’t a better artist for this series than Olivier Coipel. His artwork is so lush and highly detailed that each panel looks — pun intended — magical. There’s a captivating quality to Coipel’s sense of storytelling and he easily guides the reader along. Whether from a school rooftop or a cavern of magical artifacts, Coipel makes every setting come alive. This is some of the best character work he’s done as well as his expressive characters could almost tell the story without dialogue.

Dave Stewart’s colors are rich without being too bright and colorful. Stewart strikes the right blend to give the art a painted like appearance.

It’s easy to see how Magic Order #2 could be translated into a live-action format. Millar and Coipel create scenes that seem ideal for episode breaks and cliffhangers.

This was another highly enjoyable issue of a comic that’s quickly becoming one of my favorites. The Magic Order has a ton of potential and so far Millar and Coipel are delivering one of 2018’s most engaging and exciting reads.