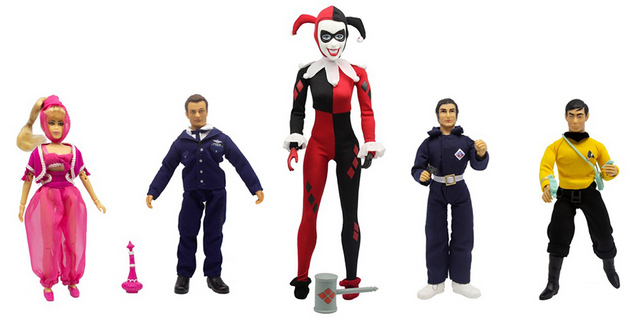 Even before I had Star Wars and GI Joes, I had Mego figures. I’ve had a soft spot for the line so I’m thrilled to hear its going to be revived as Marty Abrams presents Mego. Best part of this revival? You can get them in Target stores starting in August.

The first wave will incorporate that wide open spirit of the old line with several properties including DC, Star Trek and I Dream of Jeannie. For an extra measure of exclusivity, the figures will have a serial number and have a production run of 10,000.

‘This has been 30 years in the making and I’m excited to give my loyal fans and their kids something new and amazing to play with,’ said Martin Abrams, co-founder and CEO of Mego Corporation in a statement. ‘We wanted to recreate a line that provides that nostalgic feeling of seeing a display of action figures they had as a child, and to share that with their own children.’

If you’re attending the San Diego Comic Con, make sure to stop by the Marty Abrams presents Mego™ booth (830) to get the figures early. Abrams and a special celebrity guest will be on hand to sign all items. Joe Namath will be in attendance for the Mego panel at 1p.m. Friday in room 32AB.