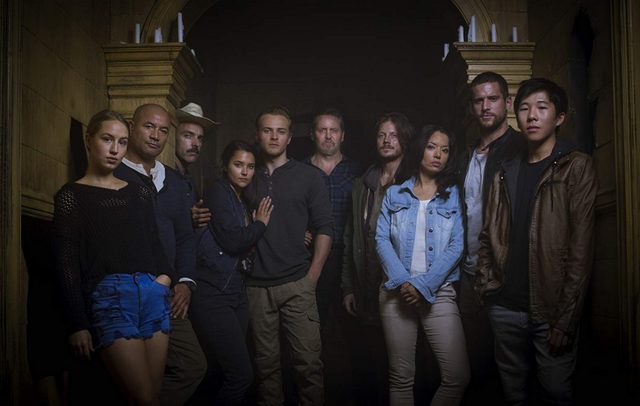 Occupation is a surprisingly high quality film that action fans will need to go out of their way to catch.

The premise isn’t one we haven’t seen dozens of times — an alien invasion force has come to take over the planet and a resistance force rises up to stop them. But Occupation does it so well that that sense of familiarity works in its favor rather than against it. It also helps that the film is presented in a manner that it’s easy to take seriously rather than defy logic and common sense for the sake of story.

In this case, Occupation focuses on a small Australian country town and the resistance formed from remnants of an attack on a fairgrounds. Among the survivors is Matt (Dan Ewing), a veteran rugby player attempting a comeback after a brutal injury; his girlfriend Amelia (Stephany Jacobsen, Alex Cross), ex-prisoner Peter (Temuera Morrison, Star Wars: Episode II – Attack of the Clones) and his daughter, Isabella (Izzy Stevens).

In a lot of ways, Occupation plays out like a movie version of The Walking Dead with aliens instead of zombies as the opposing force. Both properties focus on a ragtag group of survivors desperately trying to make it through another day. Ironically, as the film progressed, it was easy to imagine Occupation as a TV series. That’s a credit to the efficient character development from Director/Screenwriter Luke Sparke.

Like TWD, Occupation shines when the focus is on the characters and their responses to the alien threat. Some characters have a more aggressive stance while others want to understand the enemy and notice their displays of love, fear and concern. For an alien action movie, the cast performs admirably. There’s no weak link performance as the cast has a clear understanding of their character’s mindset. I appreciated the cast diversity

Just as impressive are the action scenes. Budget figures weren’t available, but the action sequences definitely don’t have that bargain basement budget look. While he might not have a team of CGI artists, Sparke more than gets by with practical effects and a smart approach to shooting the action. There’s no rapid fire editing and the action is easy to take in. The alien design isn’t the most intimidating, but more importantly, they don’t look cheesy.

Tony O’Loughlan’s cinematography is stunning particularly with the bright yellow lightning to signal the arrival of the aliens. It’s a great visual effect and one that never fails to deliver that sense of dread.

A sequel has already been announced and if it’s anywhere near as solid as the first installment, I can’t wait. Occupation is one of those films that sounds cool and then against all odds surpasses expectations. If you’re a sci-fi action fan, this should definitely make your 2018 viewing list.