The new Charlie’s Angels film might be the smartest reboot in recent memory. Why? Unlike some recent remakes like Baywatch, which swapped David Hasselhoff’s Mitch Buchannon and Pamela Anderson’s CJ Parker with Dwayne Johnson and Kelly Rohrbach, the Angels reboot is expanding the operation instead of recasting the iconic characters.

This trio of Angels will be one of the expanded teams. So fans of the two film series starring Lucy Liu, Cameron Diaz and Drew Barrymore won’t have any room to complain about ‘their Angels’ being replaced. As a result it also wouldn’t be shocking to see the 2000s era trio make a special cameo.

The only catch is ABC swung and missed on a Angel’s TV series reboot in 2011. That show had a winning cast with Annie Ilonzeh, Mika Kelly and Rachael Taylor (Jessica Jones) and only lasted eight episodes. What’s so different now that would suddenly make audiences respond to the premise? 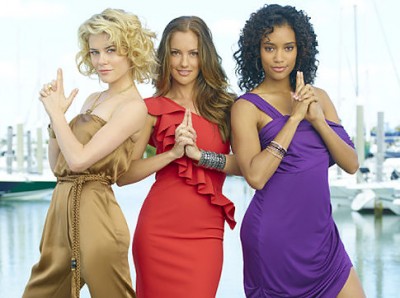 I’m also curious about Stewart’s inclusion here as Balinska and Scott are still new enough not to be associated with any other films. Years later, Stewart is still most closely associated for her role in the Twilight franchise. It almost seems like a better approach would be to have all three Angels be relative newcomers.

Elizabeth Banks will be playing the reboot’s new version of Bosley, which was played by Bill Murray and the late Bernie Mac in the 2000 era Angels films. Banks will also be directing the film she co-wrote with Jay Basu.

The new Charlie’s Angels is set for its theatrical debut on Sept. 27, 2019 continuing to expand what’s already an impressive 2019 lineup.

What do you think of the new roster? Are you interested in seeing a second big screen iteration of Charlie’s Angels?