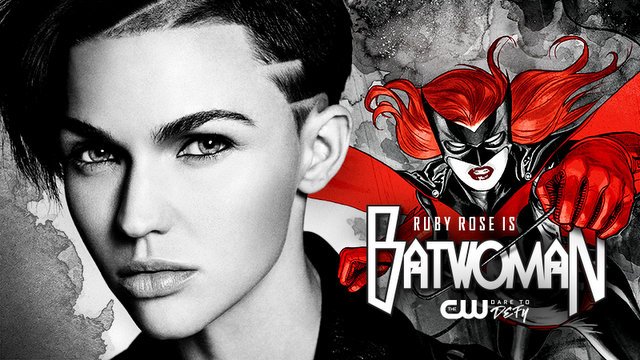 Ruby Rose has seemingly been pegged as the next breakout star for a while. After roles in Orange Is The New Black, Resident Evil: The Final Chapter and John Wick Chapter 2 Now she’s headed to the small screen in the potential major role of Batwoman in the CW Arrowverse.

Rose will be joining the Arrowverse with this fall’s crossover featuring The Flash, Arrow and Supergirl. There’s every indication that this debut is the appetizer for a Batwoman solo series. It’s not a lock the series will get picked up for the 2019-2020 season as the Supernatural spin-off can attest.

Here’s the CW synopsis of the character:

Armed with a passion for social justice and a flair for speaking her mind, Kate Kane soars onto the streets of Gotham as Batwoman, an out lesbian and highly trained street fighter primed to snuff out the failing city’s criminal resurgence.   But don’t call her a hero yet.  In a city desperate for a savior, Kate must overcome her own demons before embracing the call to be Gotham’s symbol of hope. Based on the characters from DC.

Batwoman could be a good show provided it doesn’t become another member of the plug-and-play Arrowverse. Kate is a great character with a ton of potential. She just doesn’t need to be anchored down by the nerdy sidekick, treading water love interest and sidekicks that in the know fans can’t wait for them to assume their superheroic identities.

Rose looks the part and based off her previous roles, seems like an ideal fit for Batwoman. This is one of the better casting choices we’ve seen from the Arrowverse.

What do you think of Rose’s casting?