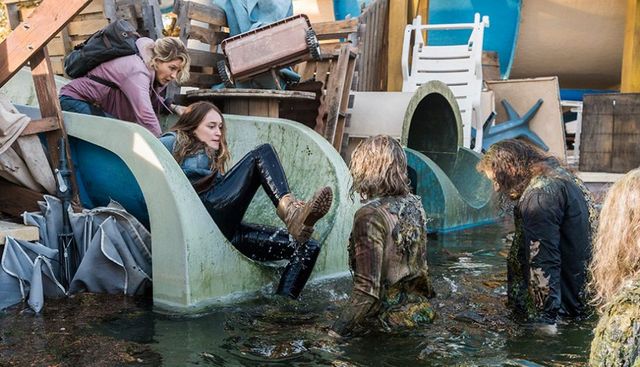 Buried was one of the better post-death of a major character in The Walking Dead franchise. It was another great episode in a season where that’s becoming the norm. Has Fear the Walking Dead been any better?

Strand, Alicia and Luciana are ready to answer Althea’s questions. This led to another twisted timeline episode that the writers and directors have done so well this season.

Times were tough at the stadium and rations were being cut with cattle feed to stretch out longer. Despite the increasingly bleak situation, only Naomi was feeling genuine despair…at first. Luciana noticed Ennis and Charlie outside laughing and having a good time. She sure doesn’t seem like a brainwashed kid to me. Madison had some ideas on supply runs and sent Cole & Strand, Luciana & Nick and Alicia & Naomi out.

One by one, Strand, Alicia and Luciana said that was the day everything changed for the worst. This style of storytelling immediately brings about an ominous sense of dread. The writers are smartly not dangling these mysteries over us for long. By the end of Buried a lot of my questions were answered. 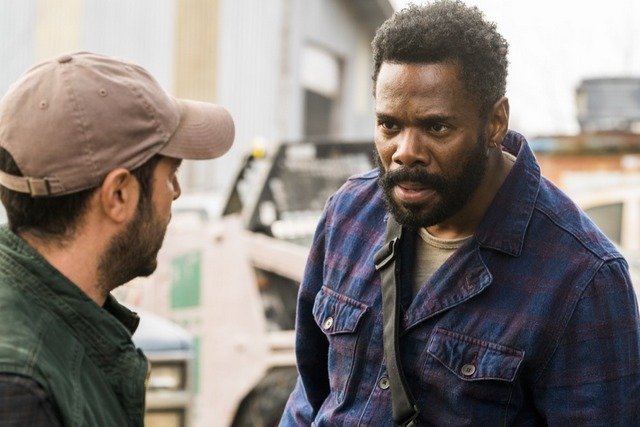 Cole is clearly feeling Strand, but Strand prefers to keep his distance. They find some herbs…and some cactus needle head walkers. Seriously, that is a creative and area specific kind of walker. Strand reveals his big secret to Cole — he’s been stashing away supplies and planning his break from the stadium crew for awhile. While it’s not the most heroic move, I can appreciate Strand always having a sensible plan to stay alive. Someone needs to. Cole isn’t down for that and says while the food would only last the stadium crew one day that could make all the difference. Against his better judgement and a weak moment of wanting to be a better person, Strand takes the supplies back to the stadium.

Nick and Luciana take a supply run detour to go to a library. Sure, everyone’s starving, but they could get books for Charlie. Thanks for the reminder that I’m glad you’re dead, Nick. Even when he’s dead this guy still finds a way to make boneheaded and reckless decisions. Luciana finds a map and she’s ready to just roll out with Nick away from the stadium and the vultures.  Nick convinces her that they could use the map to make one big supply run and start the crops back up again. This seems like a losing strategy and one that clearly did not work.

Finally, Alicia and Naomi. They go to the most fun location we’ve had in a while — a water park. Naomi spots a car ripe for rolling over walkers, but the keys aren’t around. This shouldn’t be surprising. It’s not like folks are leaving keys in cars every day especially if they were still alive and holed up in the water park. 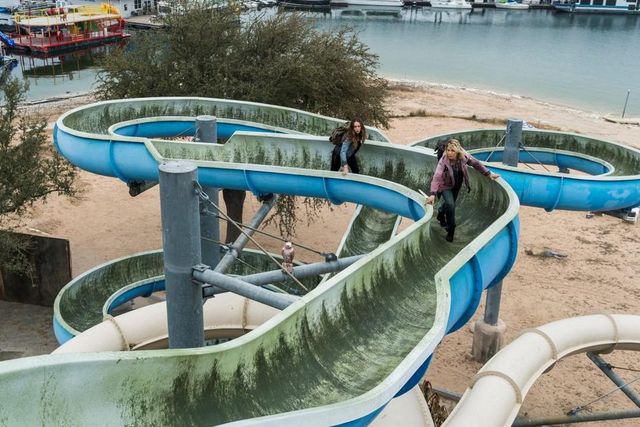 Thankfully, the set isn’t wasted and Alicia and Naomi climb up the water slide. How much fun is this as a nightmare scenario? They reach the top where a blockade was set up and find medical supplies and a machine gun…and a pair of walkers. One sends Naomi tumbling down. Another eventually causes Alicia to slide down as well, but not without grabbing the machine gun’s barrel. This is the same barrel Alicia is using as her super weapon now with a sharpened edge. That story will wait until later. Naomi finds the car keys and tries to bail, but it’s out of gas.

Alicia catches up to her and Naomi says as an ICU nurse she’s used to seeing who won’t make it. The stadium? It’s not going to last. Alicia makes a convincing enough argument to sell Naomi on returning.

Back at the stadium, Madison has a conversation with Mel. I’m confused what the heck Mel wants at this point since clearly the Vultures are in a better position than Madison’s crew. He tells her back in the old days he and his family were tucked safely away in the woods. They were fine until a wildfire broke out. Madison assumed he tried in vain to get the others to leave, but that wasn’t the case. Mel convinced his family to stay and when the fires eventually made their way to the house, he and Ennis could hear their screams. Well, that’s definitely a tragic backstory. Fleshing out the bad guys is never a bad thing, not that I’m entirely convinced the Vultures are truly bad guys.

Strand, Alicia and Luciana all tell Althea their decisions were ultimately responsible for the same outcome — Nick’s death. They’re carrying some massive survivor’s guilt. But they’ve also got a plan to get serious payback. They never had any intention to bury Nick at the destination they gave Althea. It was just the location of their secret weapons stash. With it, they’re ready to get the Vultures. Morgan is ironically the one that wants to get Nick buried. And he pays his final respects by leaving a blue bonnet on his grave. 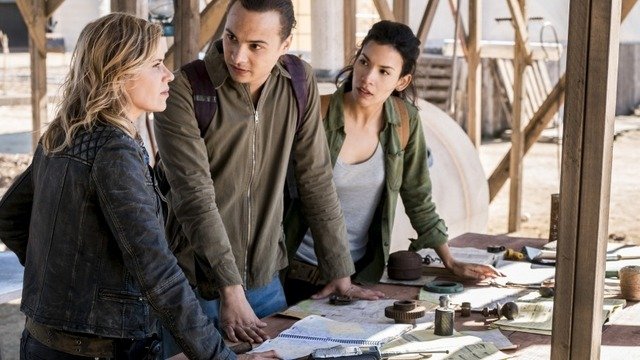 John notices a familiar bag. It belonged to Laura…the woman they knew as Naomi. What happened to her? She’s dead. Wow. That seemed to be the case based on this small crew, but this was another gut punch after Nick’s death last episode. John doesn’t care about getting payback. He needs a minute and tells Althea to leave without him. Morgan sticks with John. He doesn’t want any part of conflict anymore and John needs a friend.

Buried was another amazing episode for Fear the Walking Dead. I’m glad I decided to give the show another try as it’s blown away my expectations and is delivering an immensely satisfying experience every episode now.