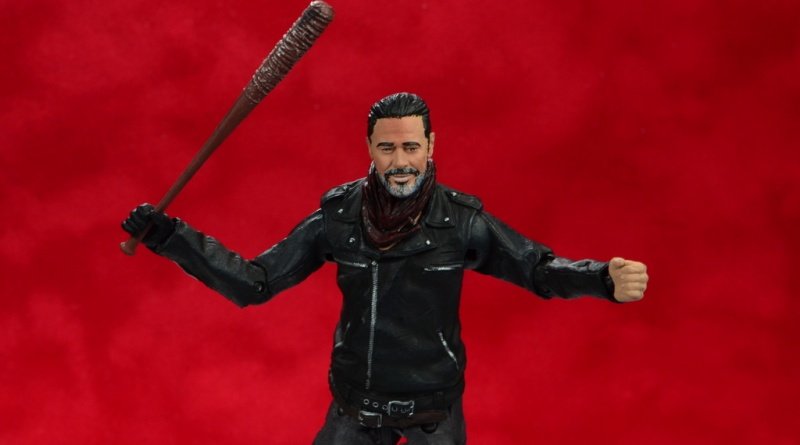 Negan is a complicated character on The Walking Dead. That’ll happen when a guy savagely kills two beloved fan favorites. But there’s something about the character and Jeffrey Dean Morgan’s performance that makes him one of the most dynamic forces in the entire series.

McFarlane Toys’ The Walking Dead collectors had a huge Negan-sized hole in their display when the company announced it was ending its 5.5” line. But thanks to a partnership with Walgreens, McFarlane Toys has maintained just enough interest to warrant trickling out some of the remaining core characters desperately in need of figures. Enter our main Negan.

Packaging:  Consistent with the latter phases TWD figures, the packaging is nothing special or exciting with the mostly white backdrop and random smoke patterns.

White is a good backdrop color as it showcases the figures — who mostly are in darker colors — nicely. No exception here. As usual, there’s no bio and the back features the 5”, 7” and 10” options.

Likeness:  McFarlane sculptors do an exceptional job at this scale. The Jeffrey Dean Morgan likeness is terrific and actually has a lot of personality. A straight faced Negan would seem inaccurate to the character, but having expressive head sculpts — especially open mouthed expressions can be tricky to get right. Excellent work here. 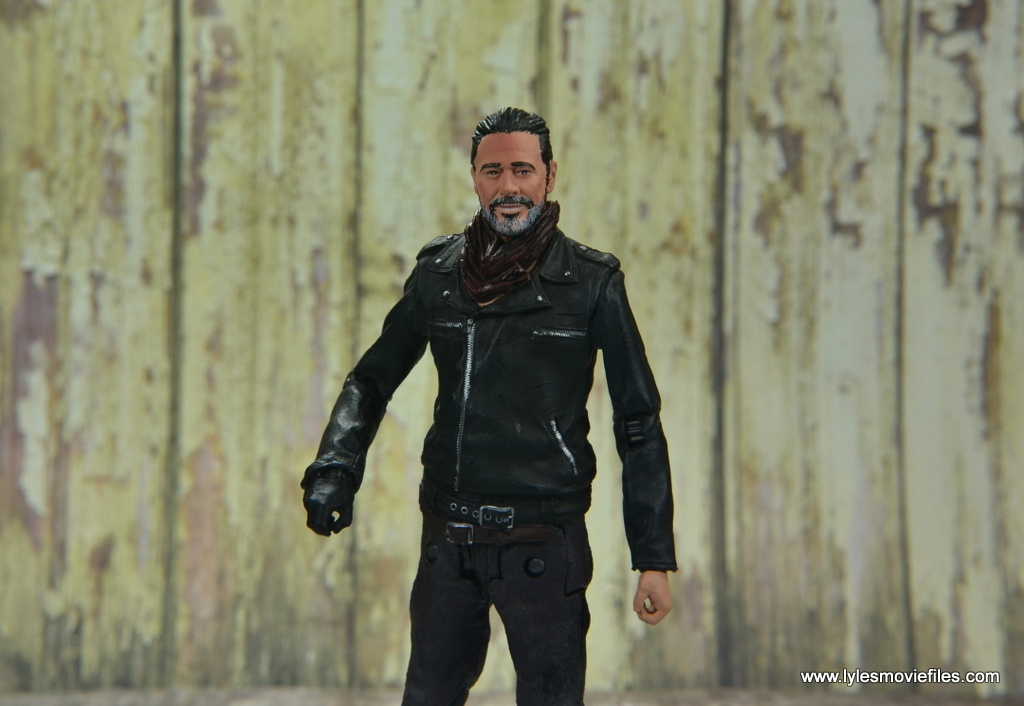 All of the other trademark details are also expertly crafted. The detail work on the leather jacket right down to the zippers is very strong at this scale. Negan’s scarf hangs naturally the two belts sit properly also. Initially, I thought the jeans were bunched up higher than they should be into the boots, but that is accurate to how Negan wore them. 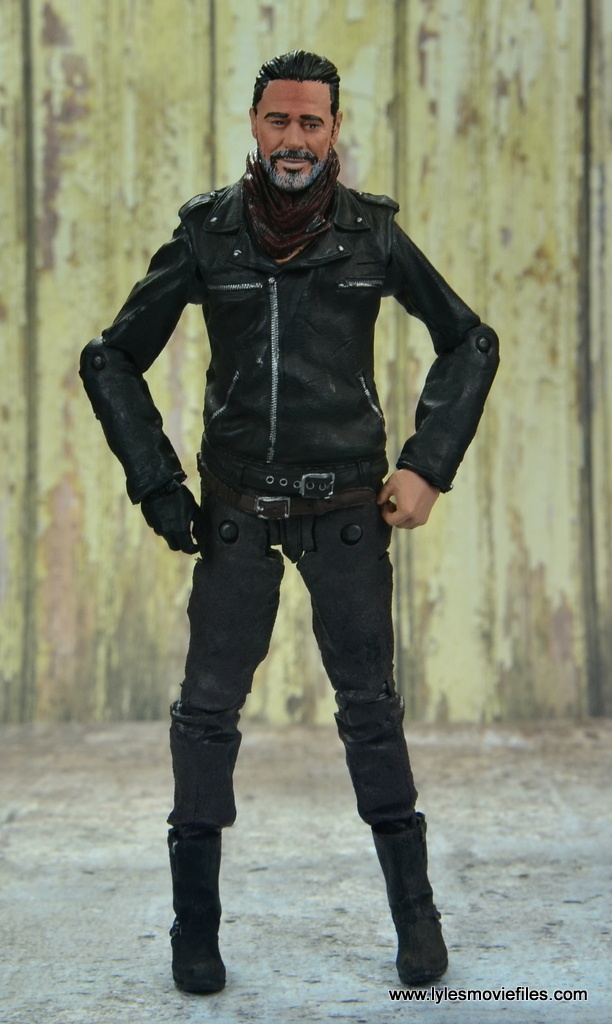 There’s some really impressive sculpting on the leather jacket to convey that material, which contrasts nicely with the fabric pattern sculpt on the pants. The boots also look fantastic. 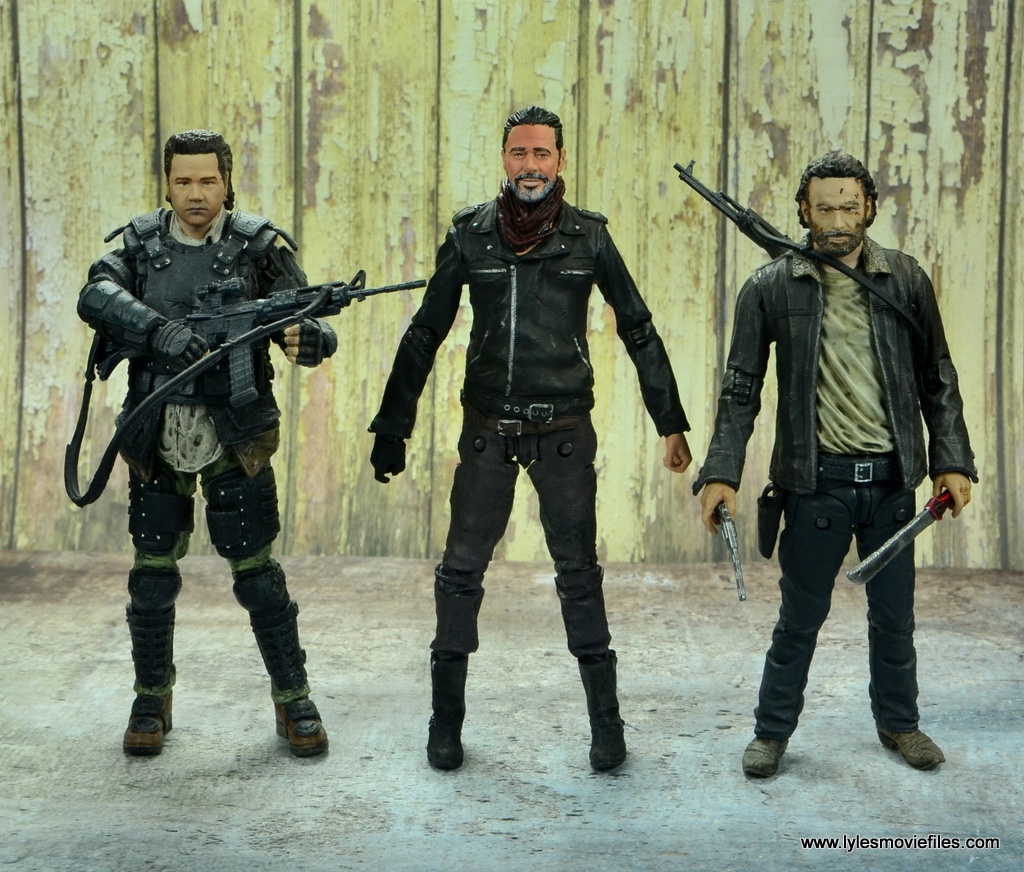 Scale:  In the show, Negan stands about a half head taller than Rick and the figure adheres to that scale as well. Not bad.

Paint:  It’s odd as the closer I looked at the paint work along the head, the more I liked it. Usually it’s the opposite with this line. There’s some decent attempt to capture Jeffrey Dean Morgan’s salt and pepper beard and the facial hair line work all around is much better than earlier figures.

The outfit paintwork is mostly great besides a few missed applications on the zipper portion of the jacket. That’s small so I can see why that would get missed. 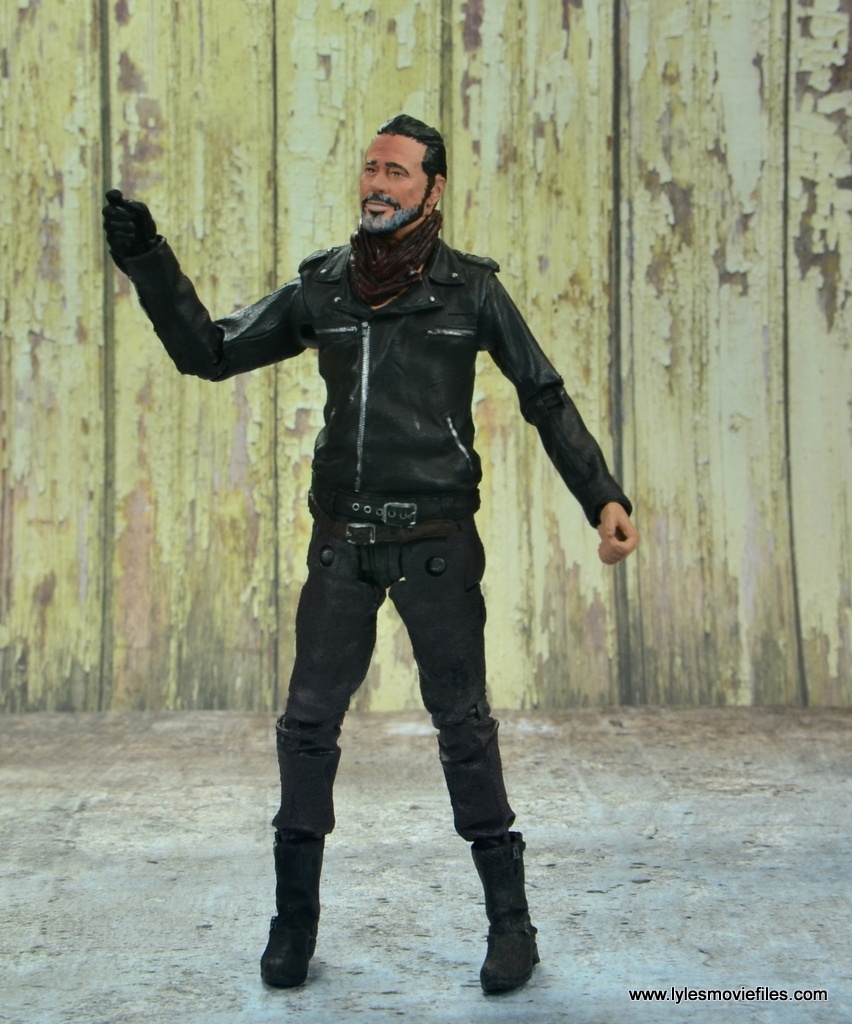 Articulation:  As usual this is the weakness of the line. Not that I was expecting to do a full-on head-cracking pose with any McFarlane Toys figure. The articulation allows for more of a basic Negan intimidation pose. That’s not a bad option given Negan’s main shtick is based on fear and intimidating tactics. 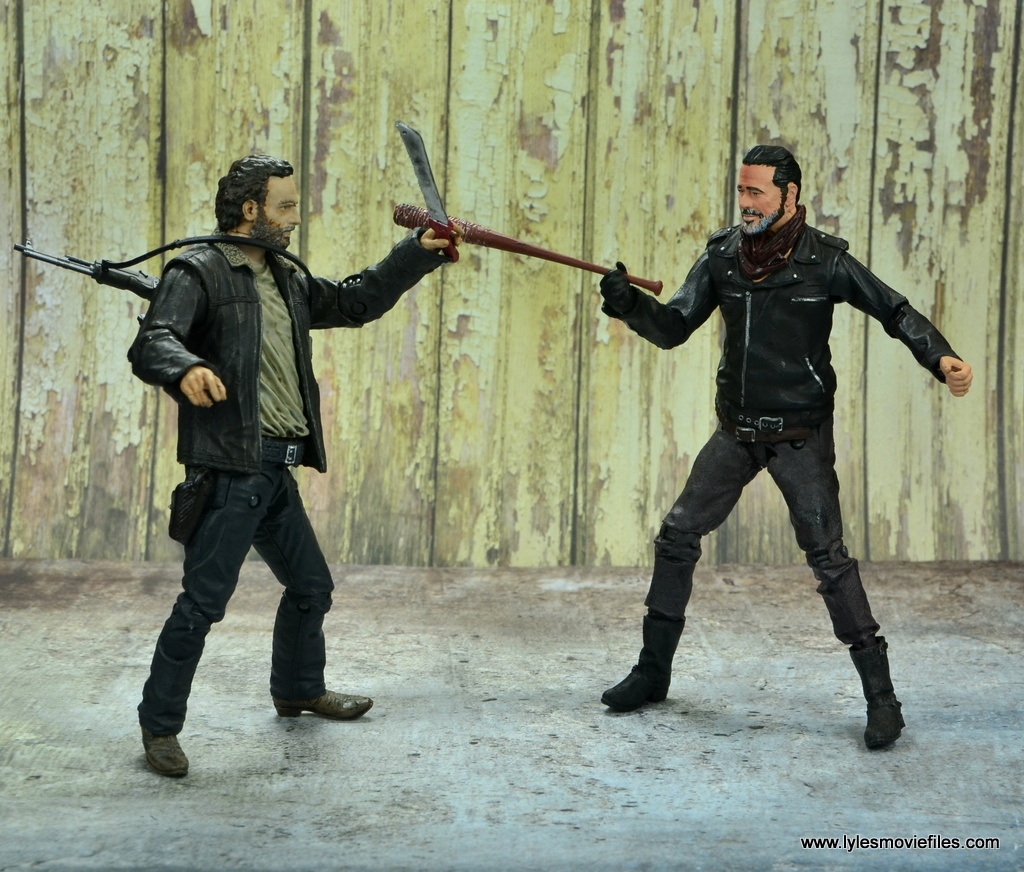 Accessories:  Unlike some of the other recent offerings, Negan isn’t packed with accessories. He comes with a separate fist to hold his most important accessory — Lucille.

As far as a barbed wire bat in the 5” scale, Lucille looks pretty good. The main issue is the paint job, which understandably can’t quite get all the intricacies of the barbed wire. 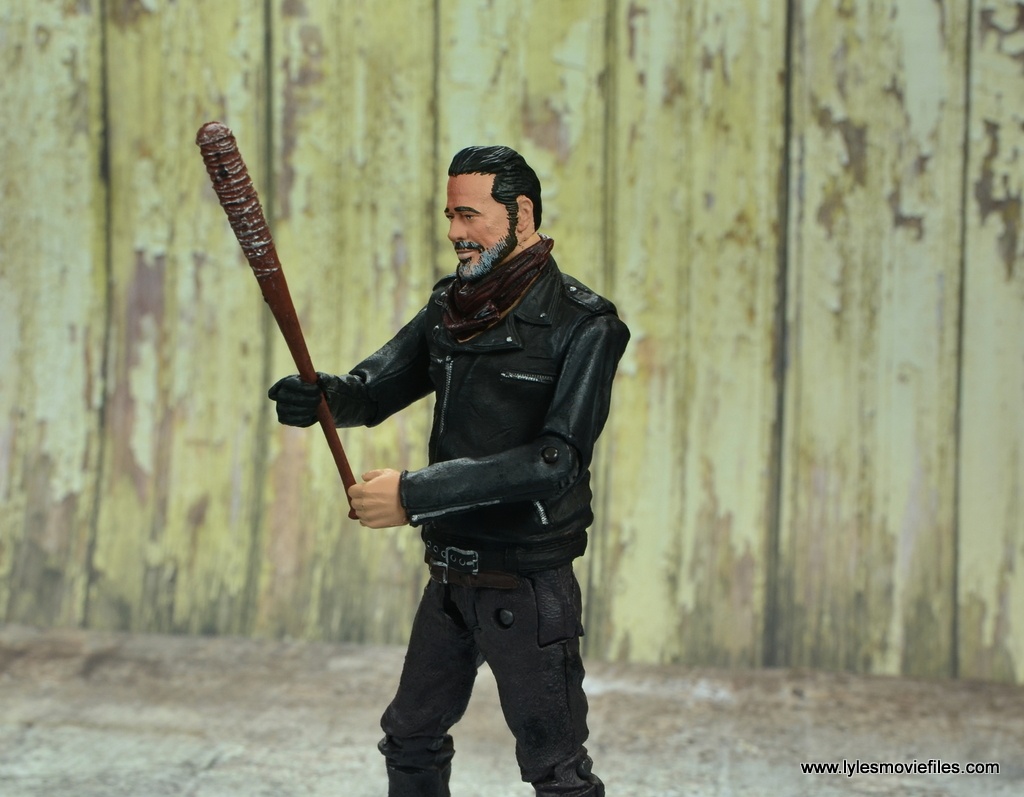 Worth it?  I got Negan for $15. That’s not the best deal considering on a good week Marvel Legends can be $15 with more plastic and accessories, but factoring in the exclusive nature and near life support of the line, I won’t complain.

The sculpting and paintwork have improved, but with better articulation, Negan would be a big winner. 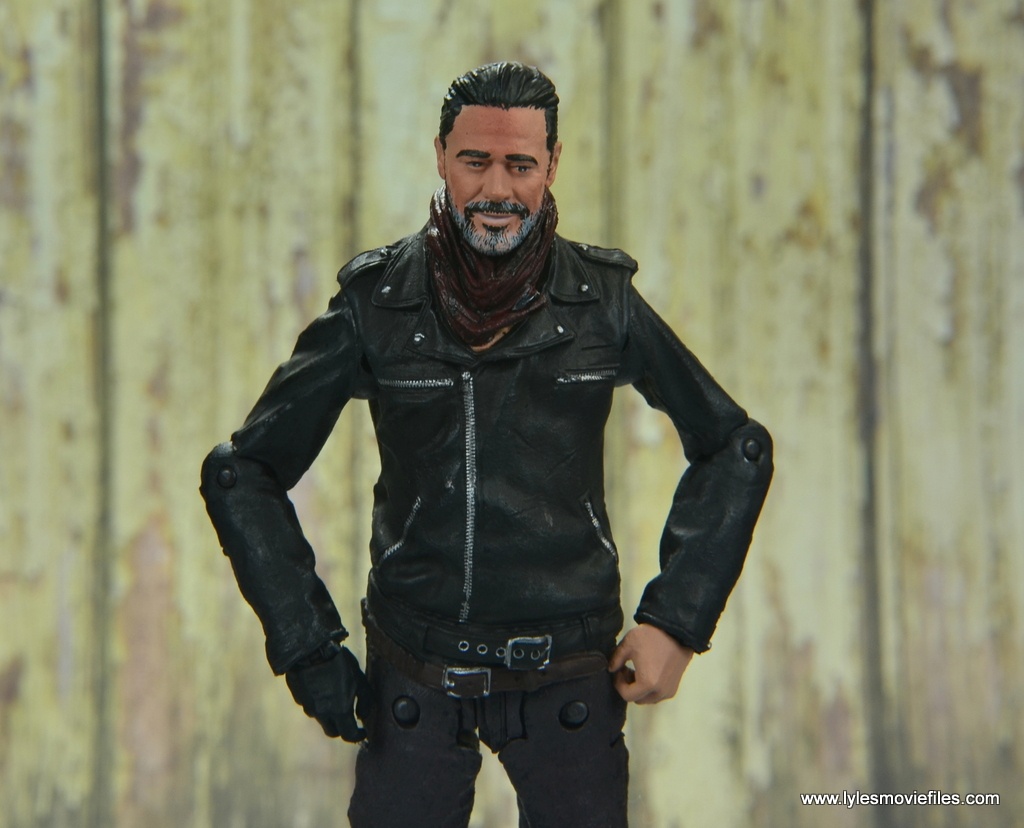 Where to get it?  Walgreens is the best place to get him, but if your stores keep striking out, grab him from Amazon.