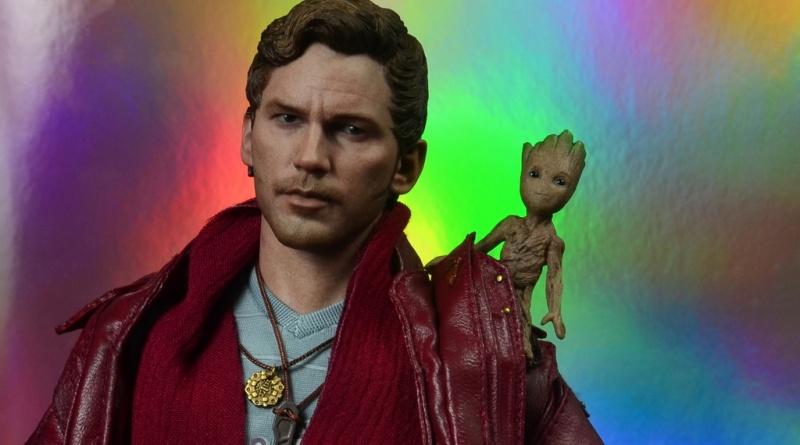 Oh Star-Lord. Two years ago, he was one of the more popular MCU characters. Now after Avengers: Infinity War, he definitely has become a polarizing character. I’m sure it’ll all work out next year when Avengers 4 arrives.  I was just happy he didn’t have a significant attire change so the Hot Toys Guardians of the Galaxy Vol. 2 Star-Lord figure could easily fit in to my larger Avengers: Infinity War display.

When it comes time to break down the Hot Toys figure of 2018, Star-Lord is going be a very popular choice. With good reason as this is one of the standout Hot Toys figures in my collection. He’s got a number of random annoyances, but nothing that takes away from a figure you can point to as Hot Toys at its best.

Packaging:  It starts right off with the packaging — also a strong contender for best of its kind in 2018. The set up is like a boom box with buttons, ‘album credits,’ tape box design all focused around the tape deck. It’s colorful and really stands out. Considering some of the less involved packages from Hot Toys, this is a work of art. 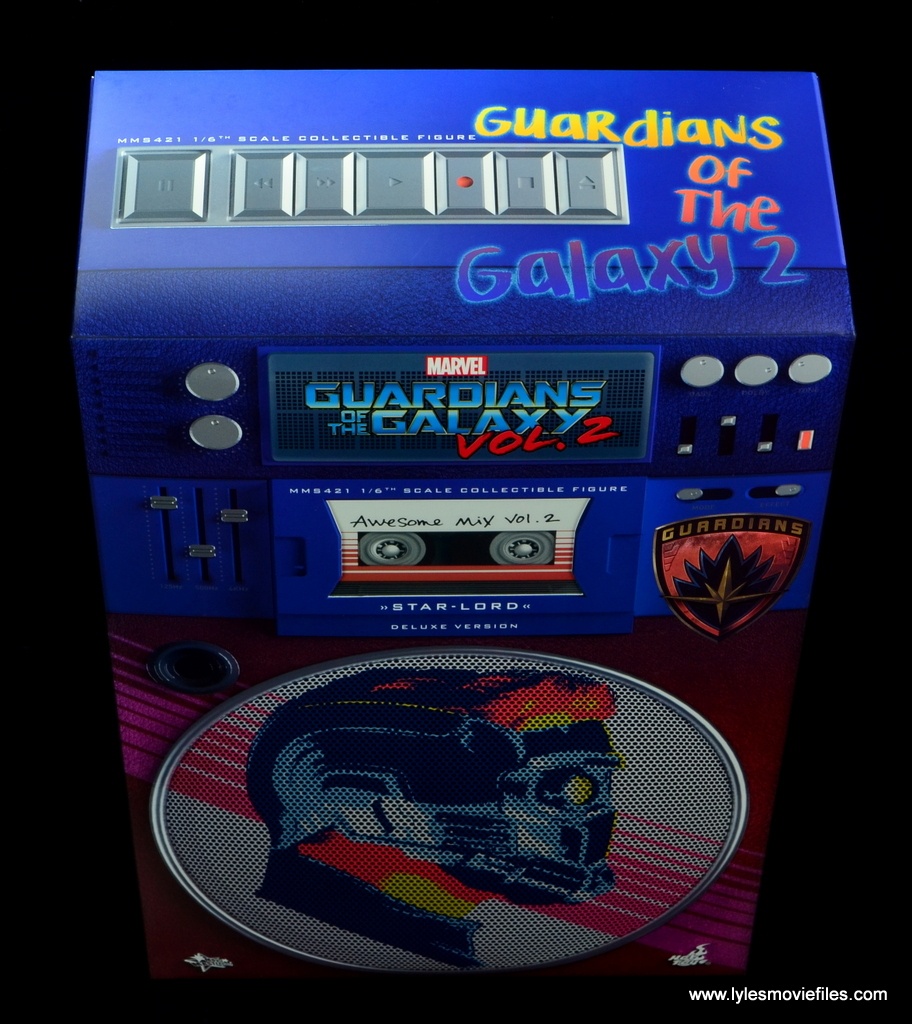 Once I removed the inner lining, I had a brief moment of feeling overwhelmed. Star-Lord is loaded and there are three different levels of accessories to break down. 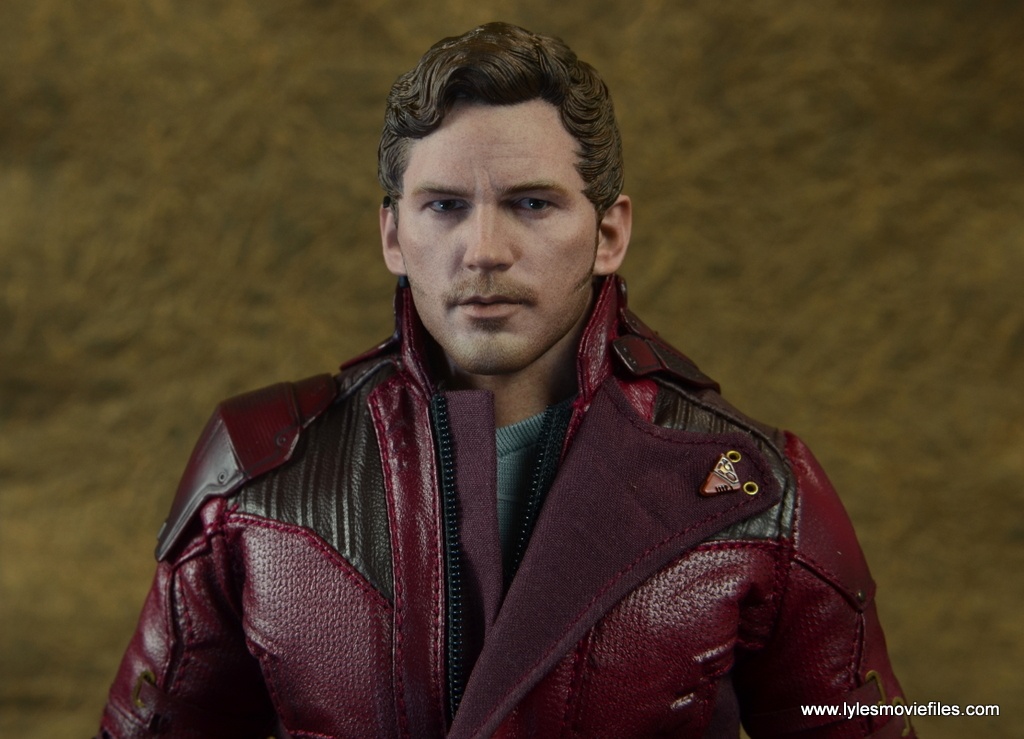 Likeness:  Chris Pratt has become one of the more instantly recognizable stars in Hollywood. The Hot Toys test as always is just taking the head and seeing if a random person could recognize it. 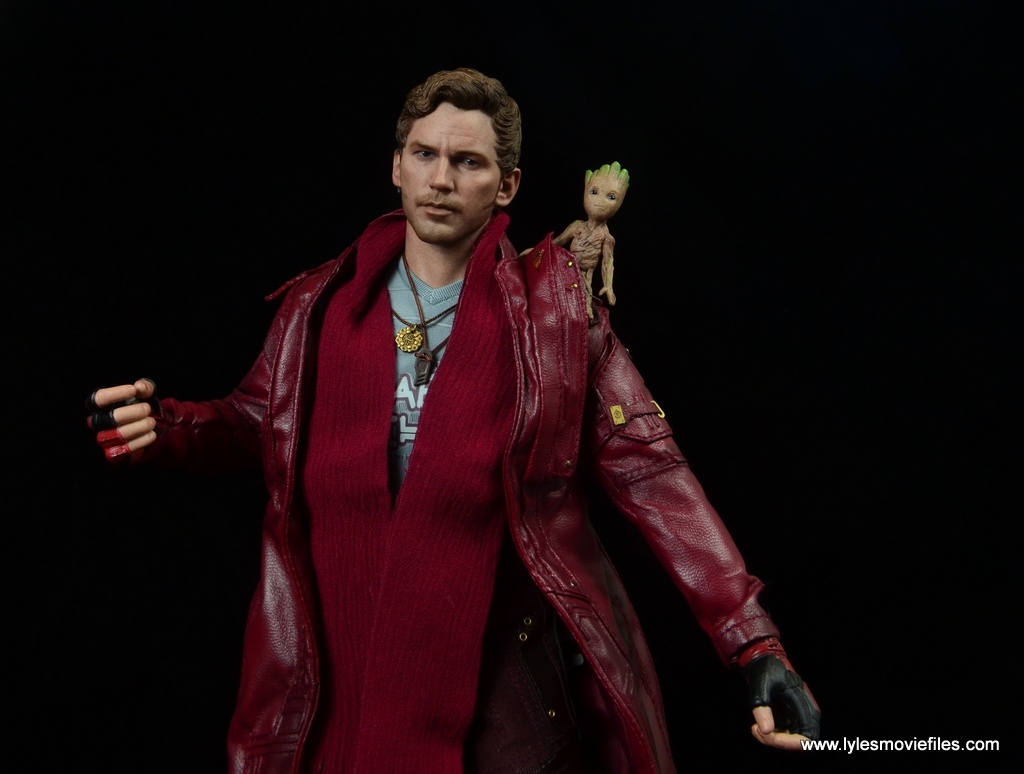 This is easily one of the best Hot Toys has done. It’s hard not to look at it and not immediately see Pratt as Star-Lord. If you photograph it just right, you can really pull off the real picture and not a figure illusion. 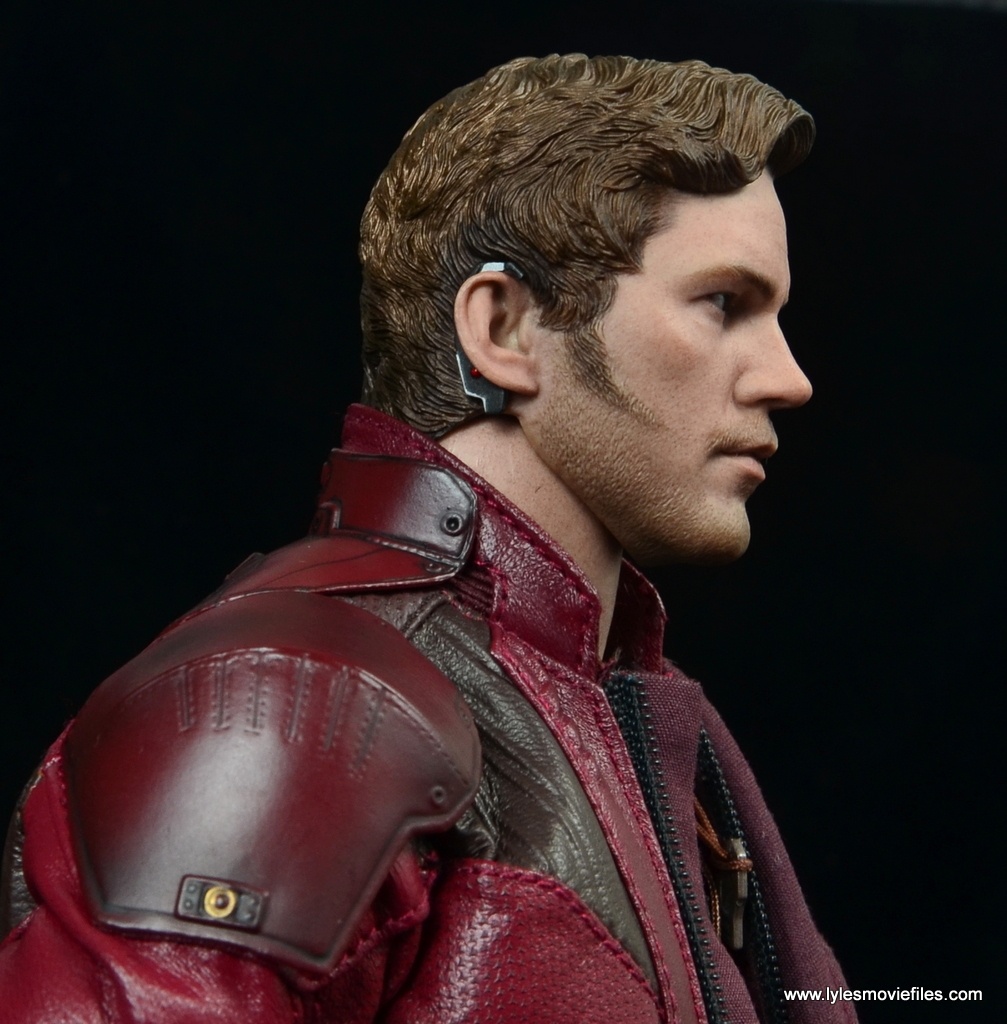 The hair sculpt flows naturally with just the right trace of Star-Lord’s mustache, sideburns and stubble. It’s really precise work and the Hot Toys team pulled it off masterfully.  Around the right ear, you’ll notice the helmet rig. It is not removable so don’t try and yank it off. 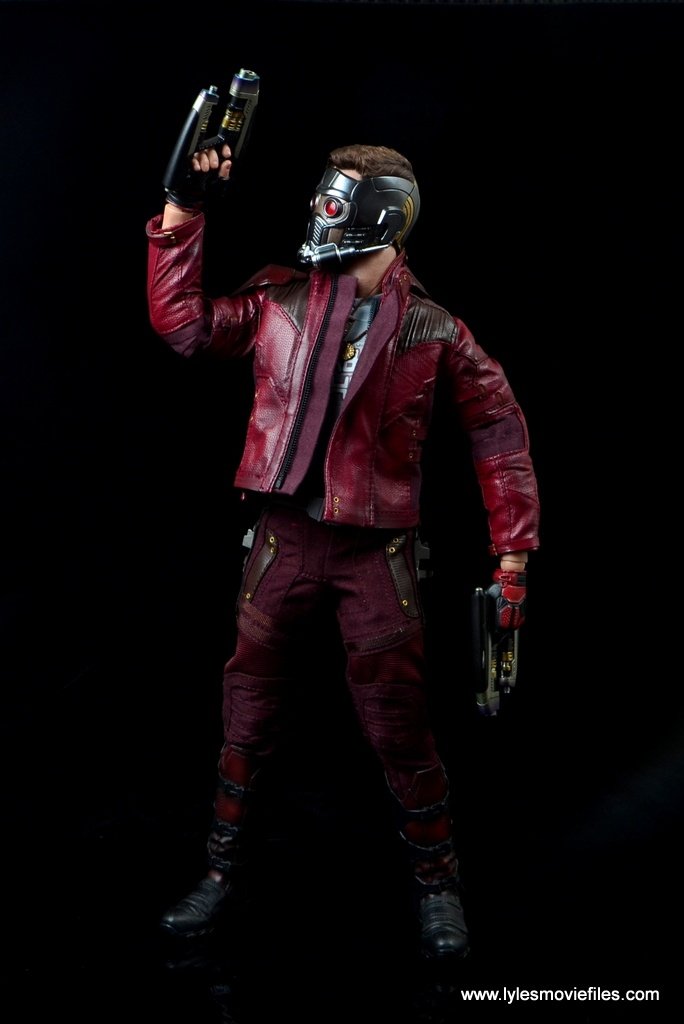 Paint:  The paintwork is outstanding here. Hot Toys always does a great job conveying skin tones and the transitions in the hairline and facial hair is very well done. Sometimes blonde hair will have too much gold, but this figure has just the right amount. 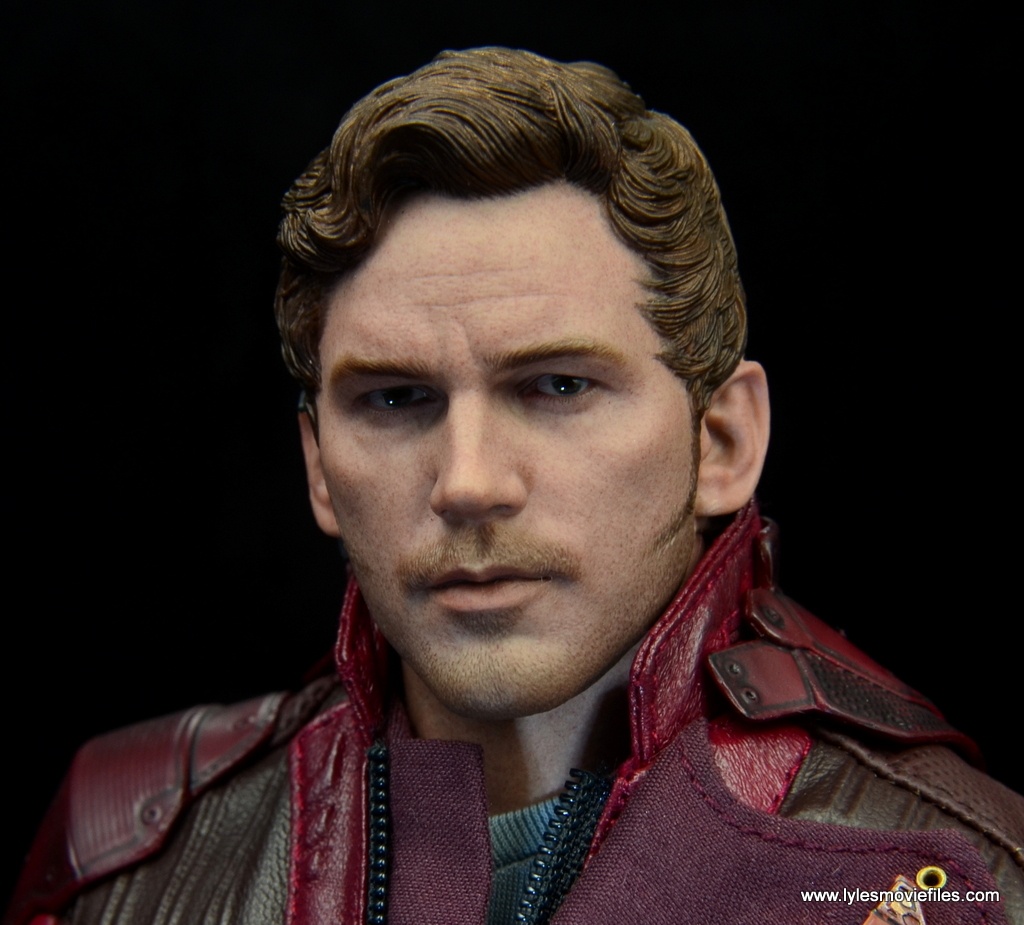 Uniform:  You’ve also got a ton of outfit options. I really love how comprehensive this figure is and how you can achieve every look from the film in one take. 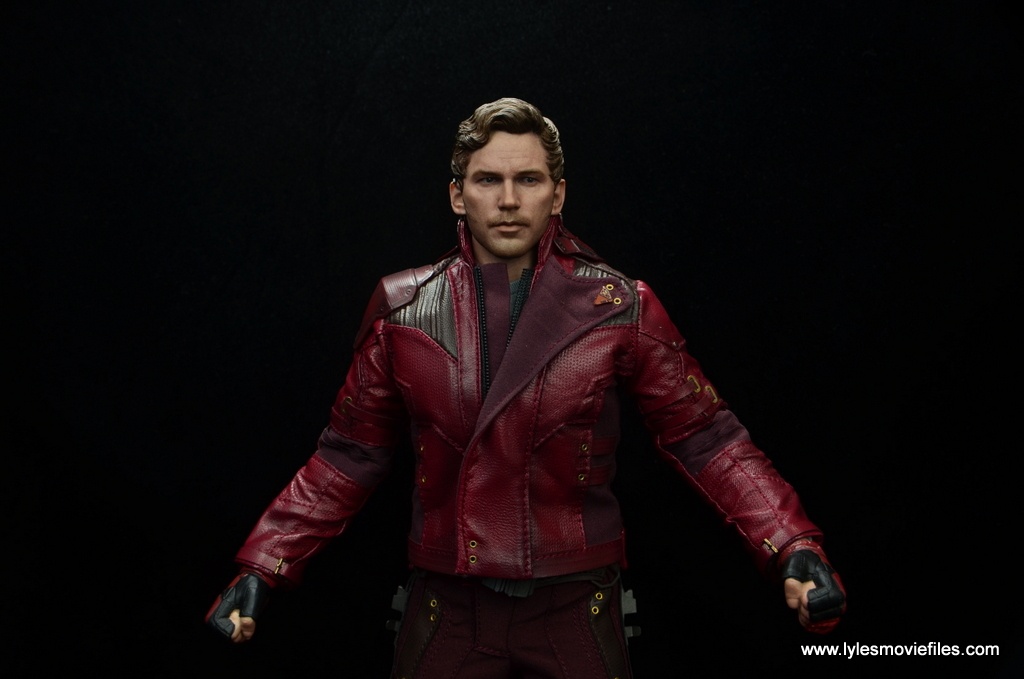 Quill comes wearing the shorter leather jacket. I know this is mostly Ravager gear, but I loved the 1980s influence on it with the big shoulder pad, the various panels and strips. There’s a little magnet on the left breast panel that can clasp onto the inner portion of the jacket.

This doubles as the support for the Baby Groot, which I realized after I finished shooting. One of the coolest aspects of the figure is how there’s so many elements and features I kept discovering the more I fiddled with it. 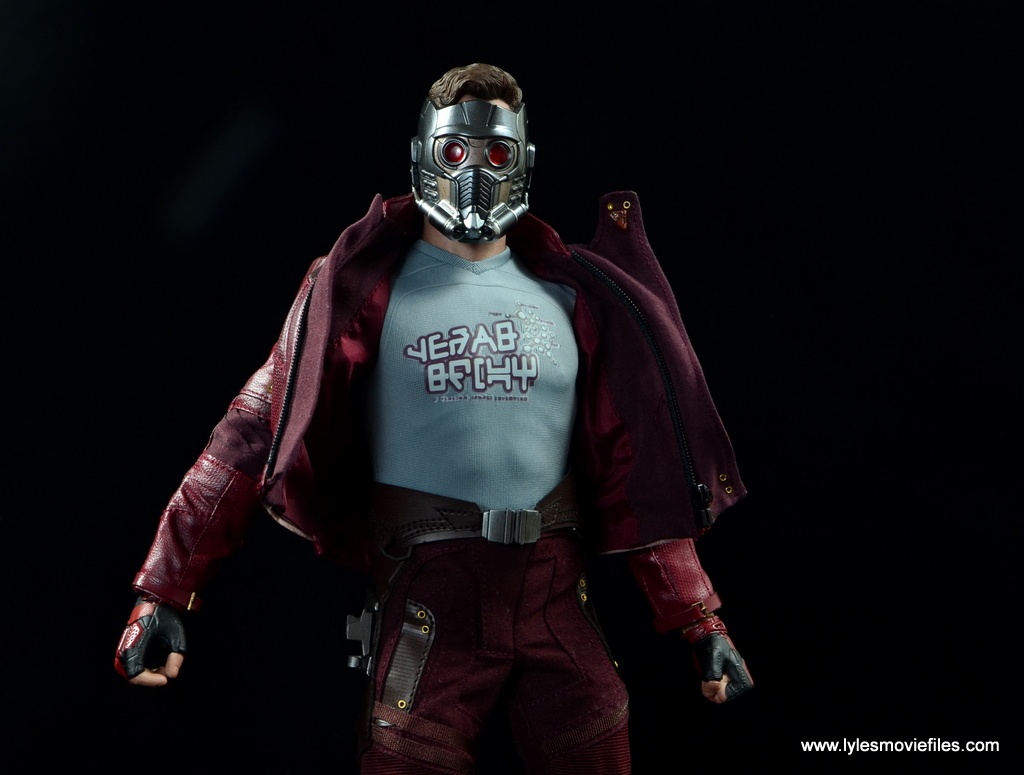 The jacket is tricky to remove though. I pulled a bit too hard and knocked the arm out of the elbow socket. Fortunately that was easy enough to fit back in place. 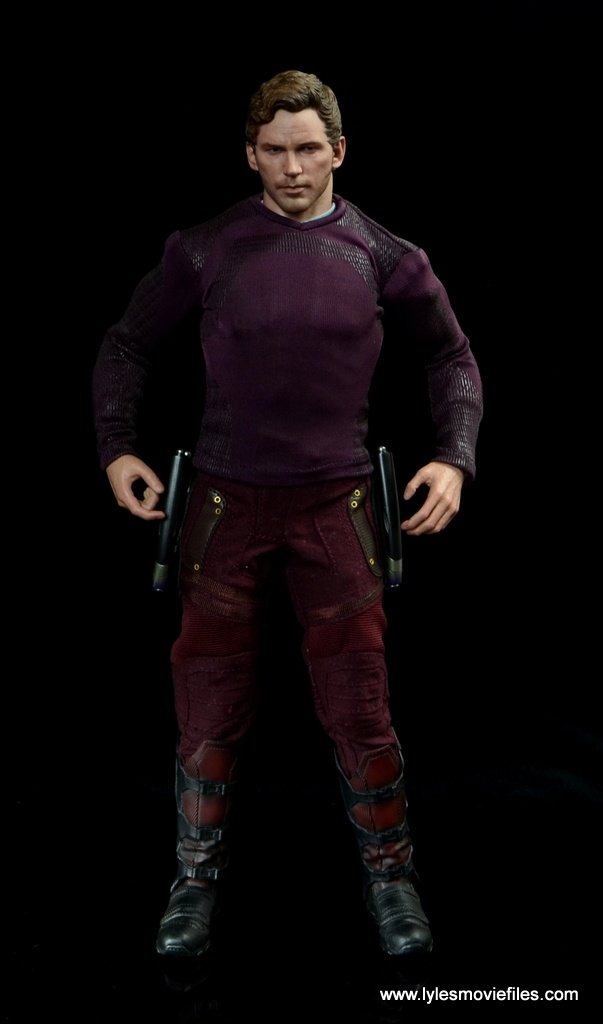 You can put on the purple shirt Quill wore at the start of Vol. 2 or the light grey graphic shirt. If you’re worried, you can fit the purple shirt over the grey one. The instructions aren’t real helpful in explaining if you need to take it the grey shirt off first. 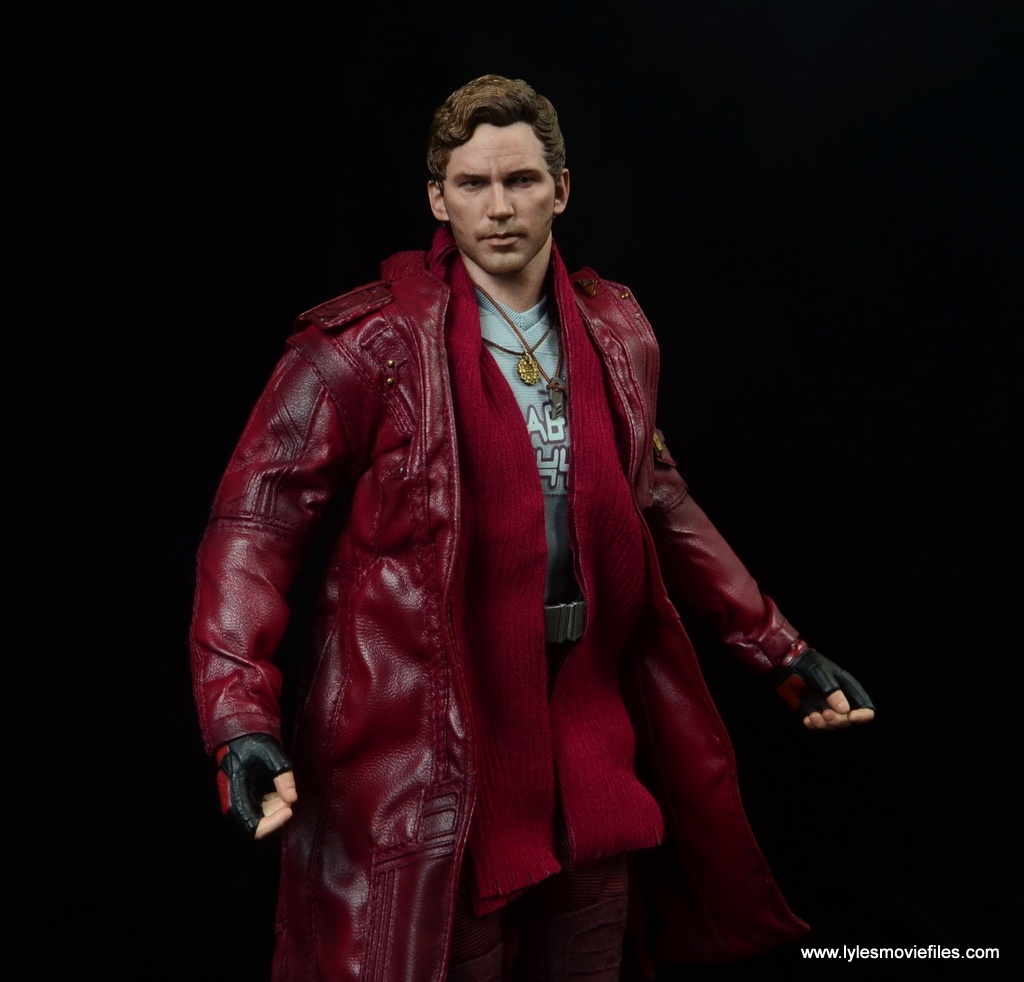 Then there’s the longer trench coat. You can’t zip this up, but Quill never did that in the film so it’s not an issue. Hot Toys put wiring in the trench coat so you can position it like a cape and control its sense of movement. And for a little dramatic flair, there’s a red scarf you can drape around Star-Lord’s neck. 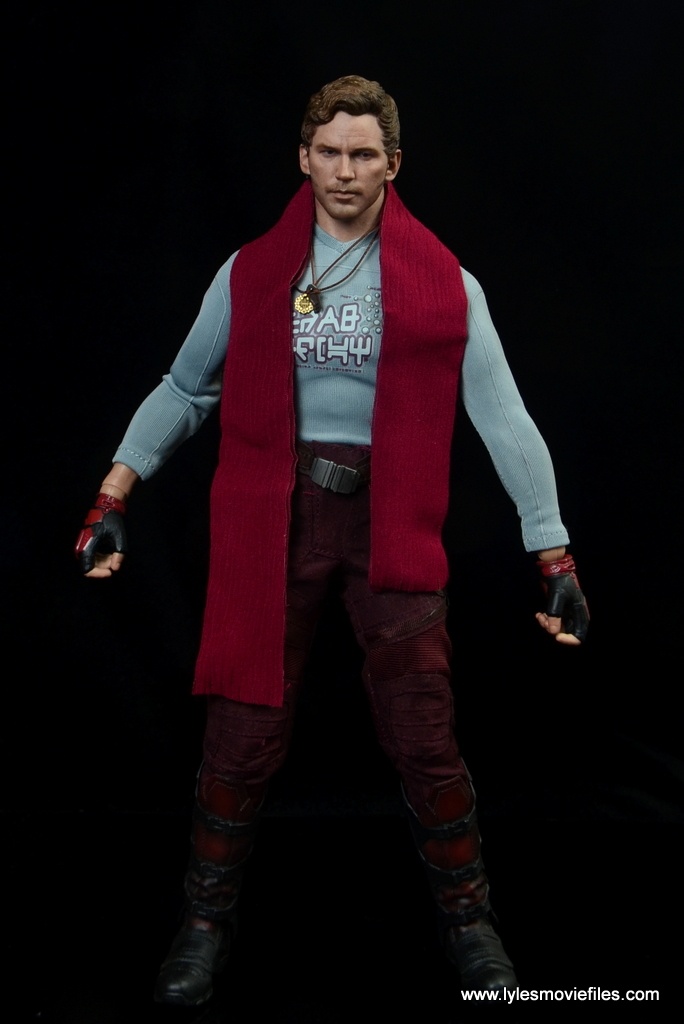 The boots aren’t as problematic as some figures thanks to the two piece set-up. They’re set up in a way so it’s not obvious and they’re very nicely detailed. Another minor outfit gripe is the right holster as the gun won’t lock in as tightly. It’s prone to falling off when fiddling around with the figure. That’s a bit annoying, but not a huge problem.

Scale:  Star-Lord is scaled properly as he’s taller than Spider-Man and a bit shorter than Iron Man. 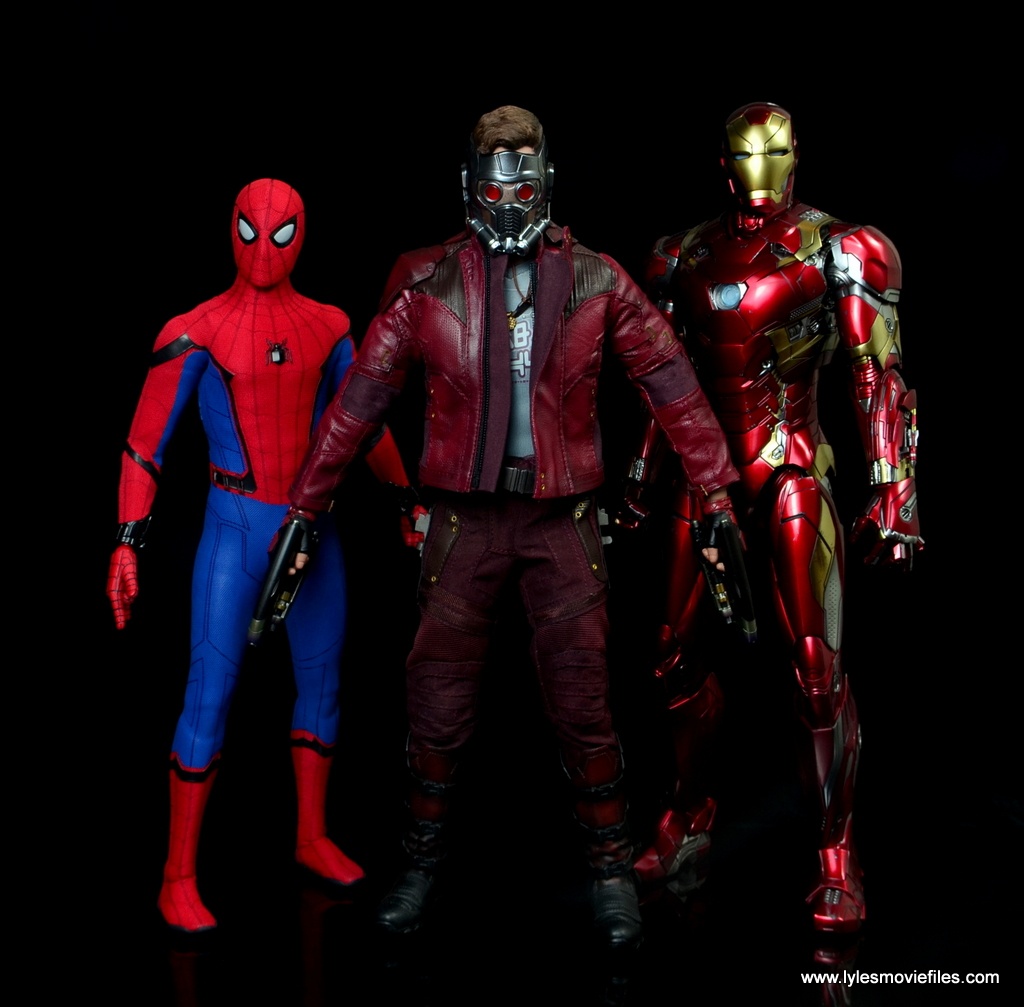 Articulation:  I’m not sure what body Hot Toys went with underneath, but it’s set up in a way for maximum articulation. I had a blast pulling off various poses and even channeling a little Flash Gordon with Star-Lord. 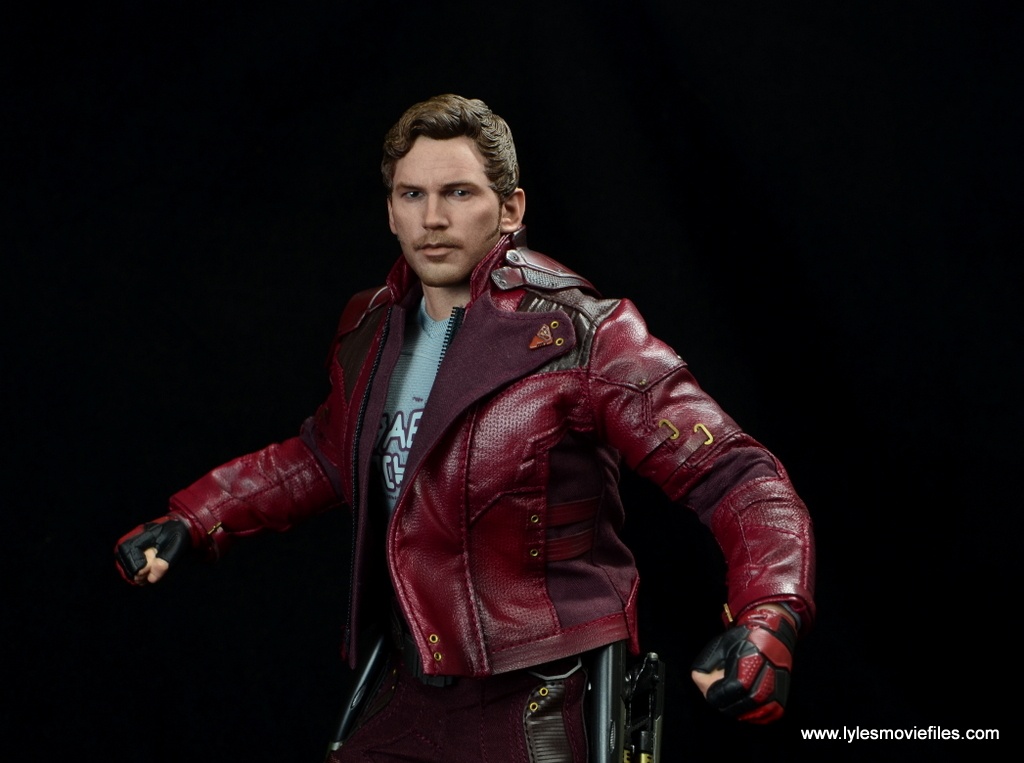 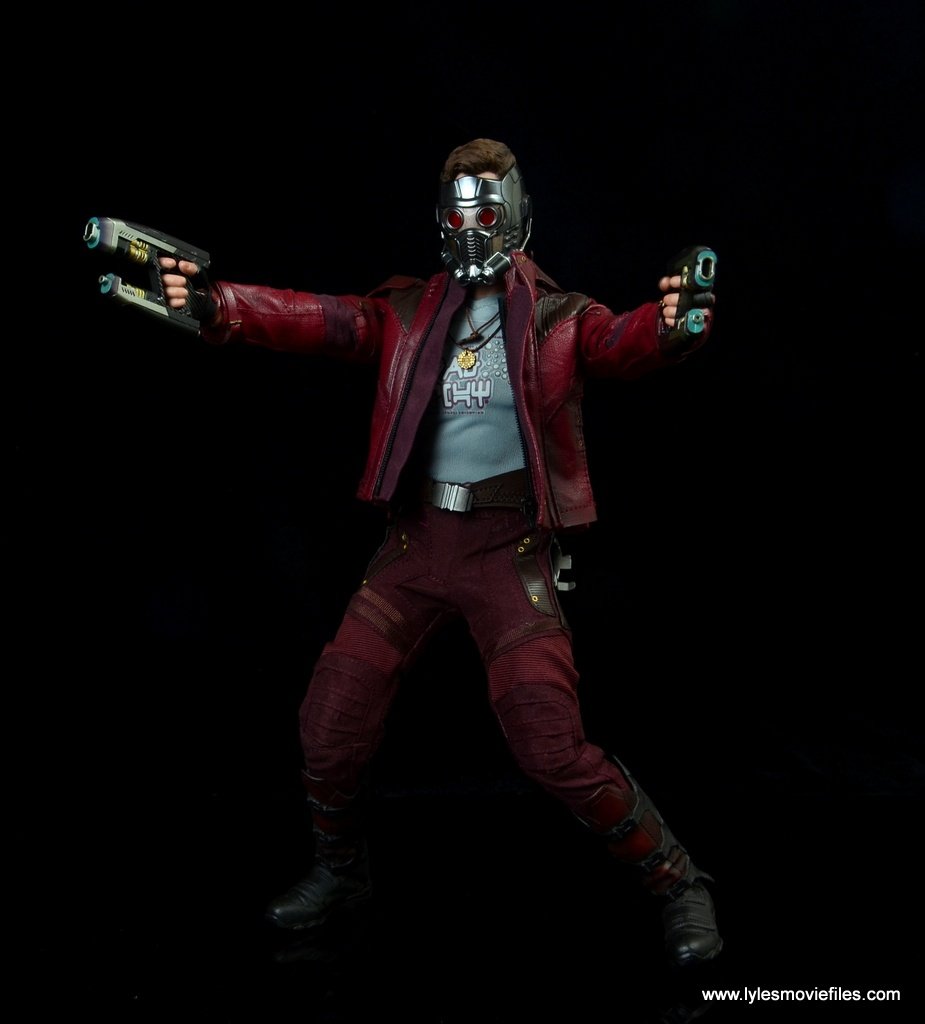 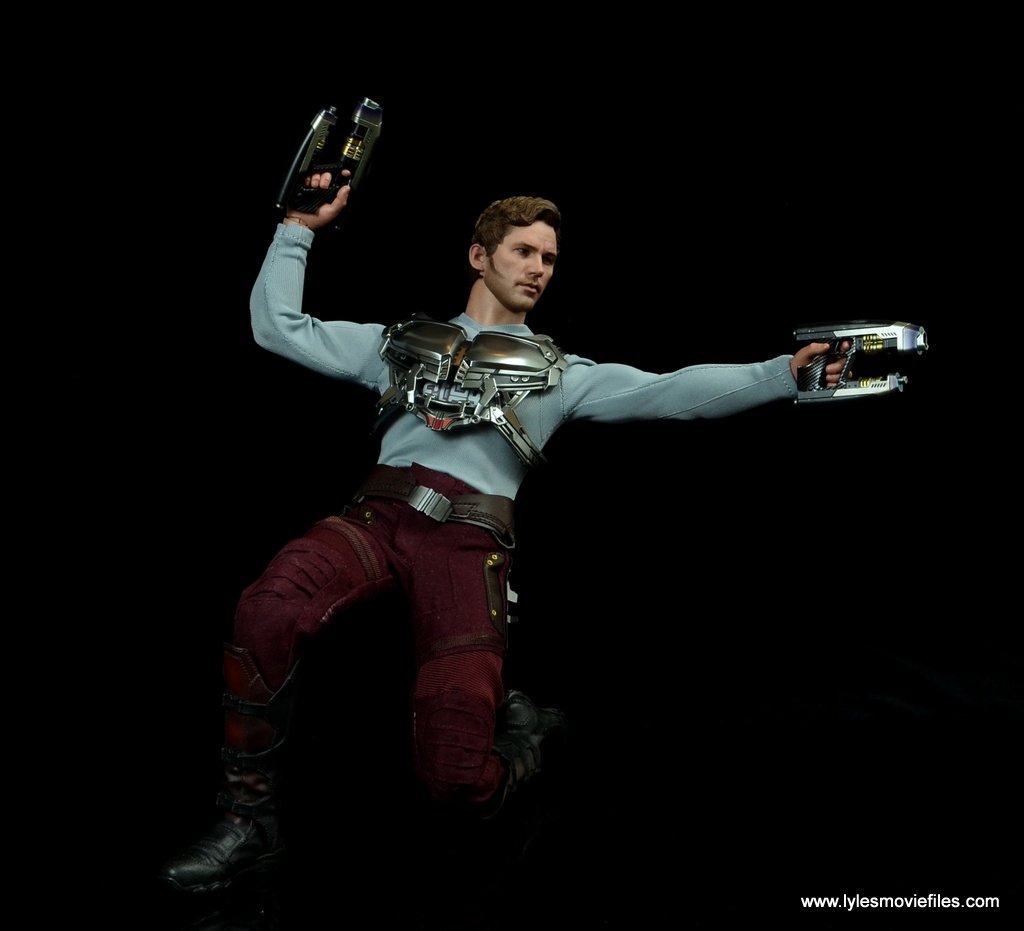 Accessories:  Give me a sec to catch my breath. I got the deluxe version because Hot Toys knows I’m a sucker for a comprehensive figure. 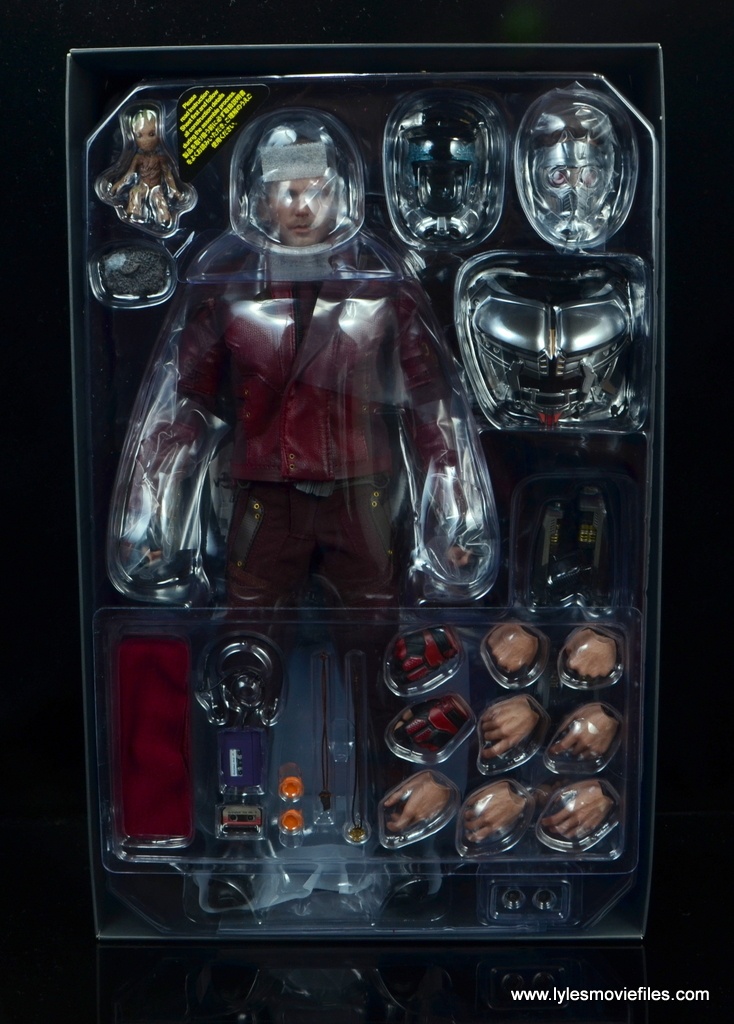 Next up is the air rig. This snaps onto the figure easily enough even though I could never quite manage to get it as snug as I’d like while on the figure. The material is just soft enough that I didn’t want to push it too aggressively.

There’s two necklaces as well and they’re tied in a way so they hang at different lengths. 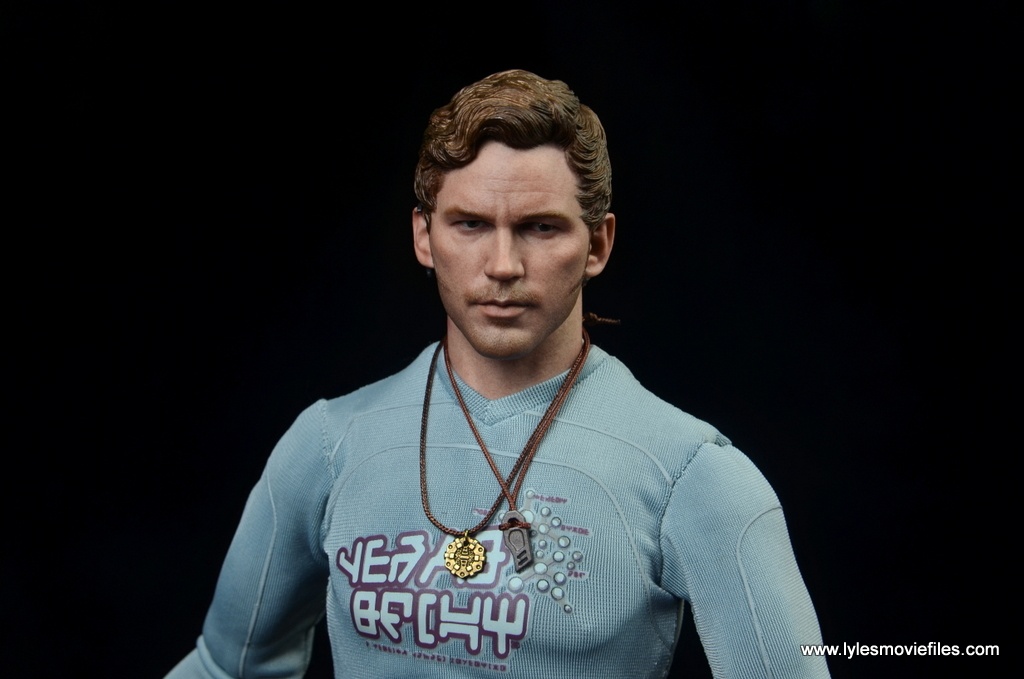 Another exclusive to the deluxe figure is the transitioning helmet. This fits along the unmasked head sculpt and fastens with a magnet in the front. It’s a cool effect and another great bonus. 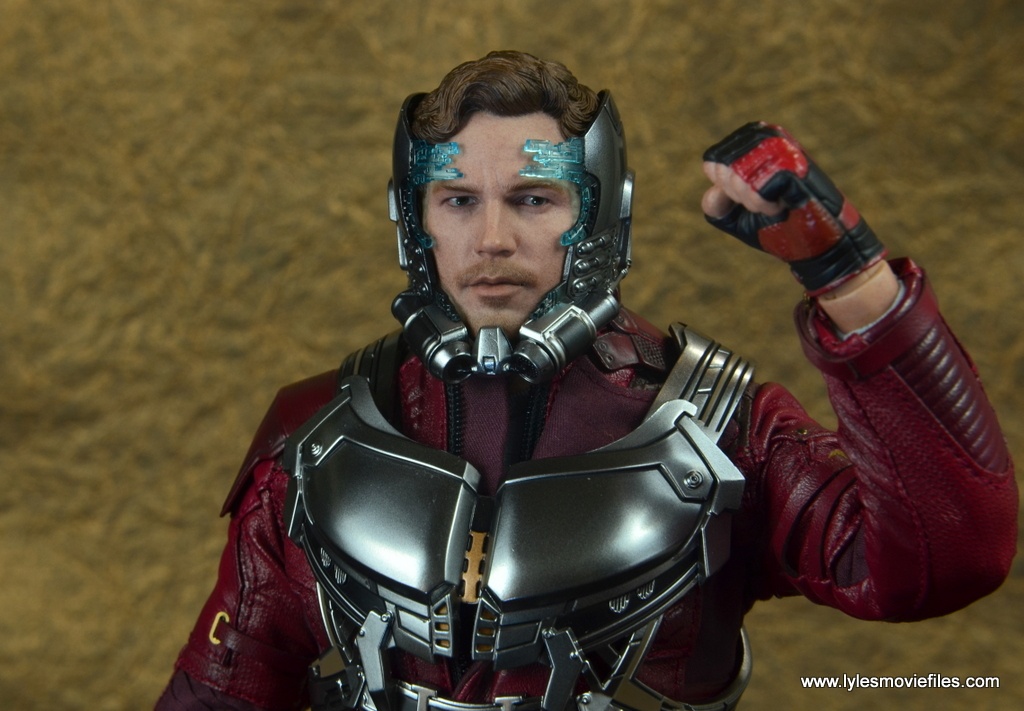 Next up is Star-Lord’s blasters. Hot Toys didn’t half-tail these as there’s plenty of sculpted detail and paint effects like faded barrels and gold accents. They snugly fit into the gun holding hands and don’t come out without significant effort. 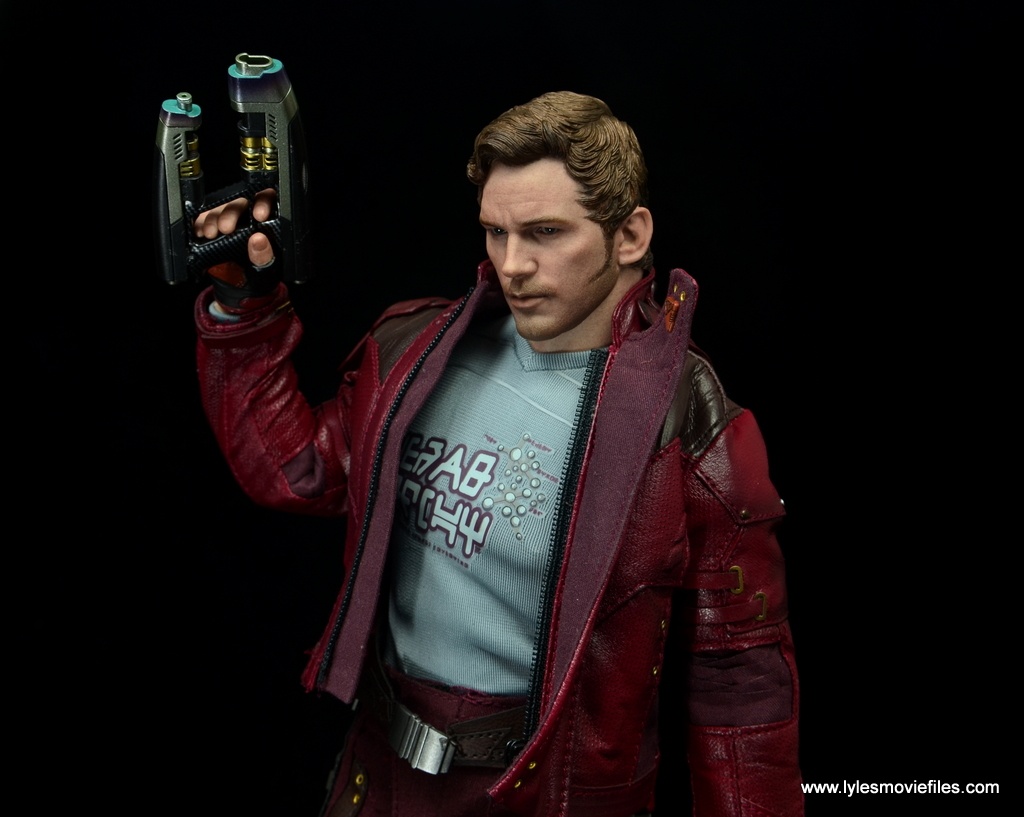 To help keep the mood light during battle, Star-Lord also has his Walkman with headphones and removable ear pads. The Walkman attaches easily on the belt. There’s also a separate cassette that does not go into the tape deck.

As usual, there’s a stand to help for more dynamic action poses. The base is very colorful and again really stands out from similar Hot Toys’ lines. 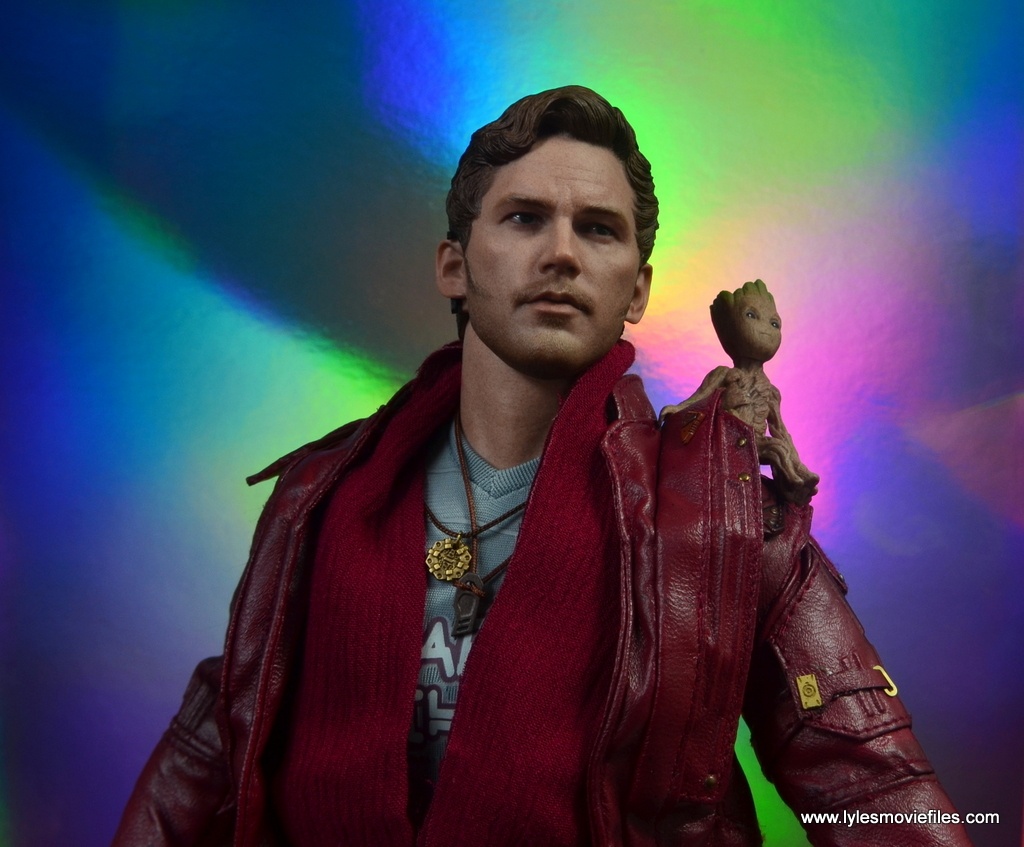 Finally, my favorite of the incredible array of accessories — Baby Groot. The little guy is a statue, but has soft enough arms that he can ‘hold’ on to Quill’s jacket. For a more secure fit, Hot Toys put a magnet on his butt. There’s also a very small rock like base Groot can rest on when he’s not getting a shoulder side view. Even at this small scale, Groot is really well done with excellent sculpting detail and paint especially the wet eye look. 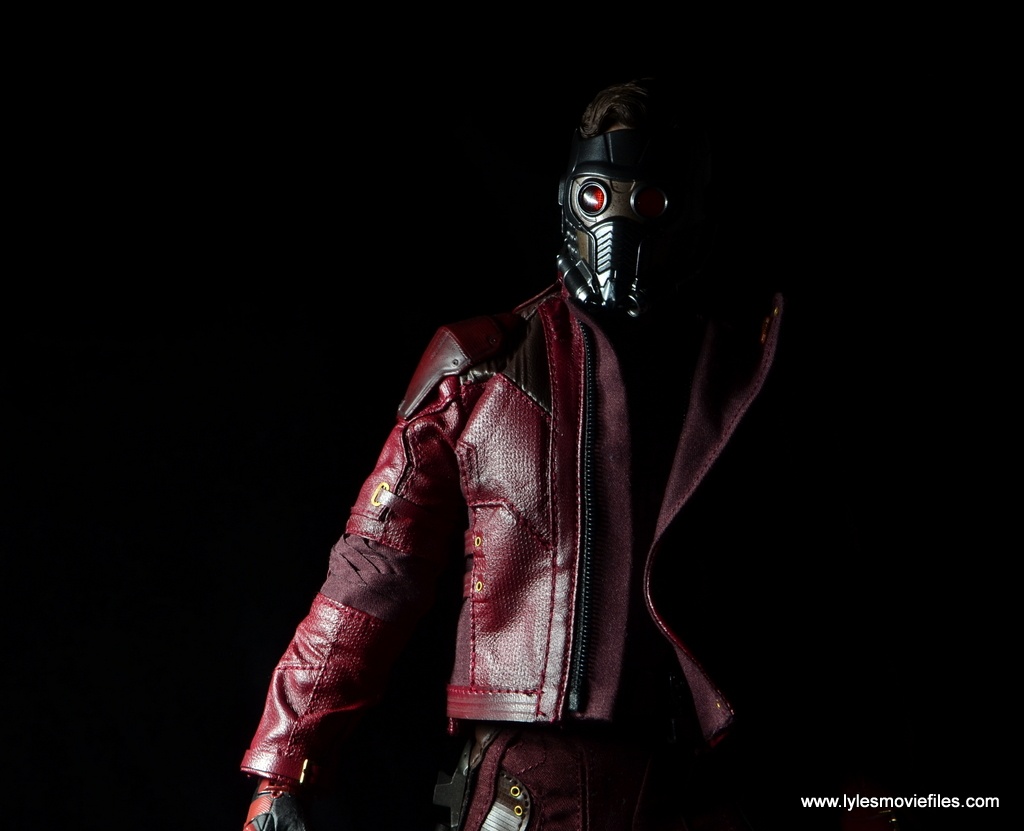 Light-Up Feature:  Hot Toys puts together some amazing figures, but they’re sadists when it comes to ease of the light-up component. His helmet lights up, but that is a far easier said than done feature. 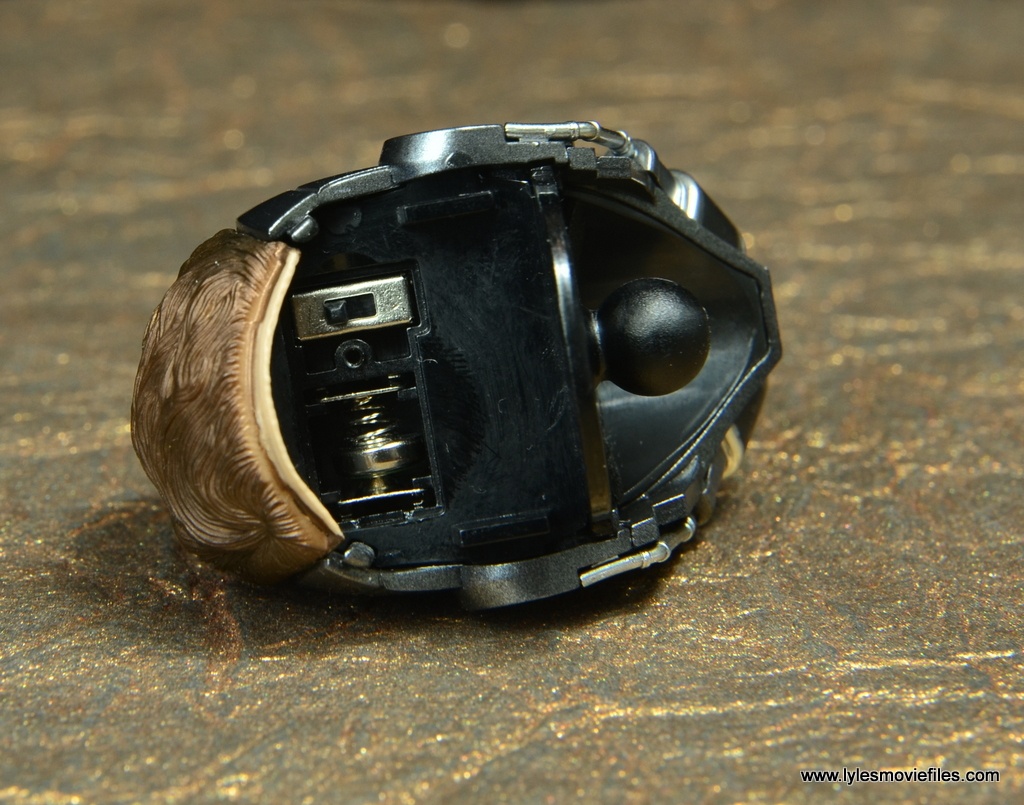 It took me a very frustrating 30 minutes to properly install the batteries. They’re tiny and the compartment to place them in seems made for children or people with baby hands. Once I managed to get them in place, the light effect was OK. 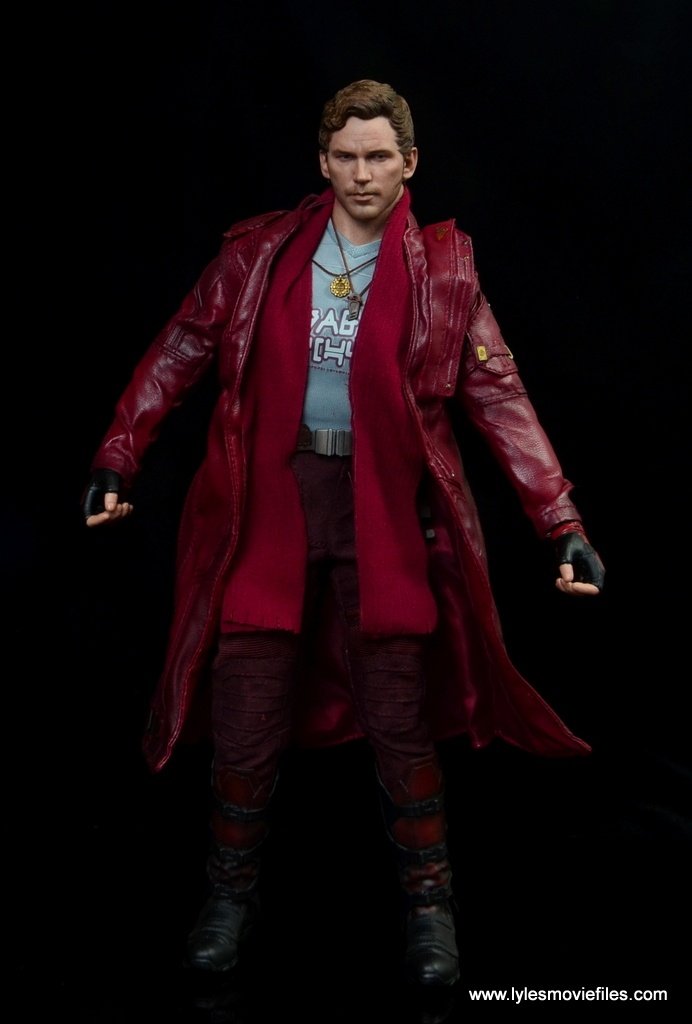 Worth it?  Hot Toys charged $251 for this figure. There’s other figures that are slated for the rest of the year that aren’t this well done or packaged with accessories. I definitely think for the price point and what all is included this was a fair price. 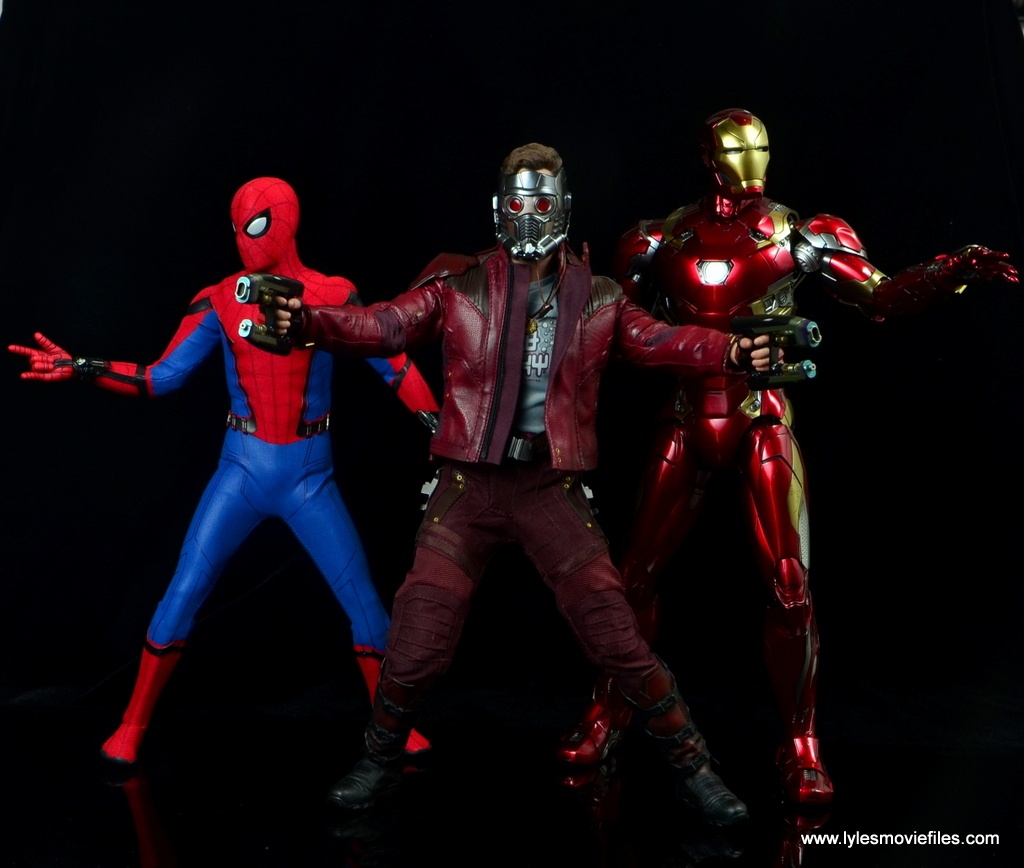 For Marvel Cinematic Universe Hot Toys figures, it doesn’t get much better than Star-Lord. The upcoming Doctor Strange and Thor might rival it, but I’m thinking this one is my Hot Toys MCU figure of 2018 easy. 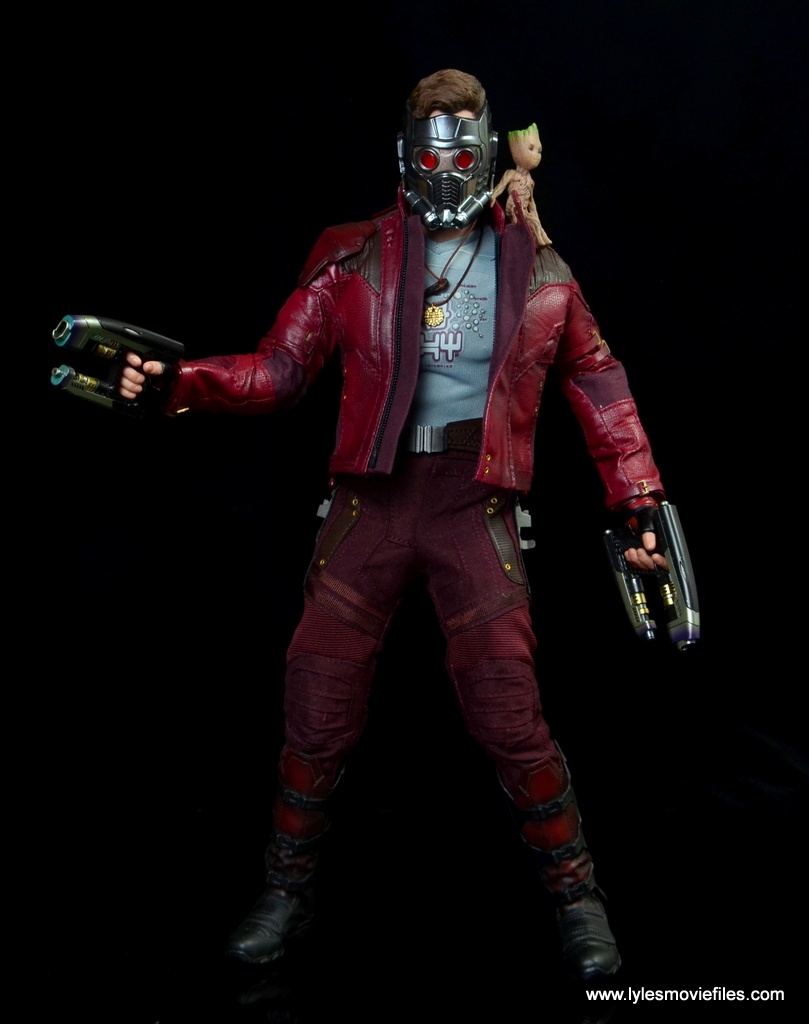 Where to get it?  Sideshow Collectibles sold out of Star-Lord so the best bet is eBay. The good news is you can find some reasonable auctions. Hot Toys hasn’t revealed an Avengers: Infinity War Star-Lord figure so this is the one to get now. If you find a good deal, I’d definitely recommend grabbing it ASAP.