The Code revealed a few important things this week on Fear the Walking Dead. That big storm was actually a hurricane so the flying walkers made a lot more sense. And maybe, just maybe there’s some hope for humanity left. Failing that, at least we got some interesting and mysterious new characters to keep things interesting.

Striking out in his efforts to find Alicia, Morgan waits the storm out in a semi. He’s hit the mother load of supply caches as it’s stocked with the take what you need, leave what you don’t boxes. Morgan gets to enjoy the ‘good life’ with lanterns, blankets, food and water. And just in case, there’s bullets and knifes too.

He awakens to find the semi has gone for a ride. Now he’s at a truck stop stocked full of supplies, power and best of all a working toilet. With magazines no less! Yes Morgan, it’s time to believe in Santa Claus again.

But this being Fear the Walking Dead, Morgan can’t have nice things as a guy orders him out. At least he’s decent enough to let Morgan finish his bathroom business. The guy (Daryl Mitchell, Galaxy Quest) is in a wheelchair and he’s very reluctant to lower his shotgun.

It’s not until his sister, Sarah (Mo Collins), arrives that Wendell eases up and fully hears Morgan out. Turns out Wendell and Sarah are a few of the remaining good folks left as they’ve been dropping off these supplies at random stops along the way to help others out. That’s a welcome shift from the normal FTWD/TWD mindset where most strangers are trying to rob, kill and destroy. 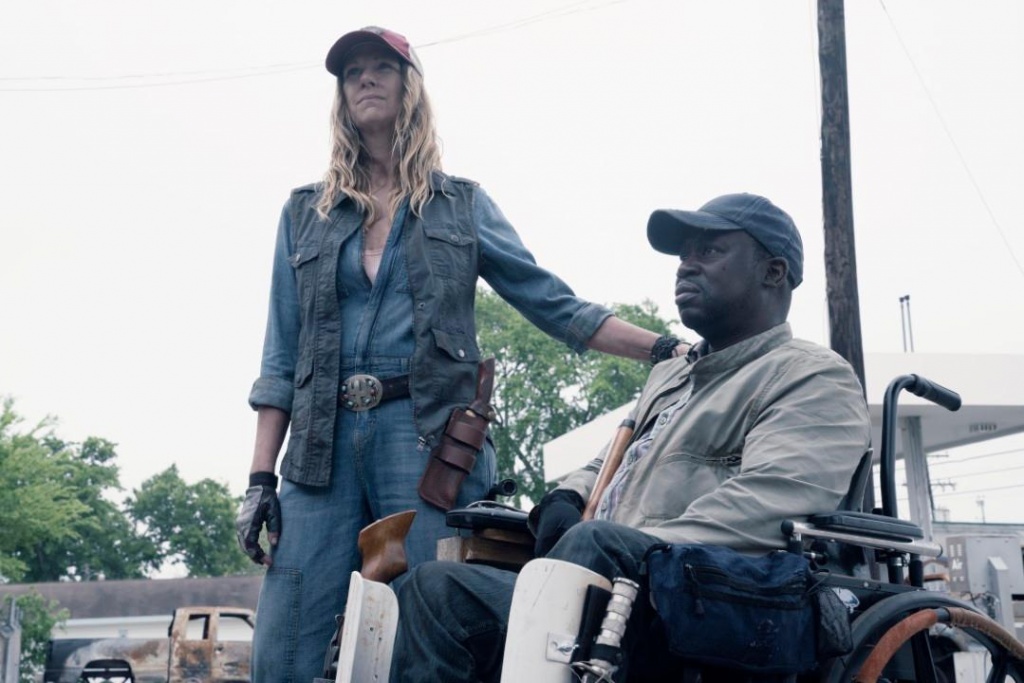 Wendell can relate to Morgan people as he lost his dog in the hurricane. When Morgan says he wants to try to find Alicia and company, Wendell provides us with the first bruuuh on The Walking Dead universe. I’m instantly a fan of this guy. Loaded with supplies, Morgan sets off to find his recent crew, but has second thoughts. He gets on the radio and tells Wendell and Sarah the bridge is out and he’s rolling with them to his friends in Virginia. And he’s not taking any comments about his other pals.

While he’s waiting to reconnect with Wendell and Sarah, Morgan spots a man running in a field with a bag over his head frantically trying to avoid walkers. Despite Morgan’s rescue, the man (Aaron Stanford) isn’t overflowing with gratitude. After calming down, Jim tells Morgan he was kidnapped for his beer recipes. Jim is ready for the return of normal society and he’s all set to be the beer man.

Jim represents a rare character who has business goals in mind once society gets back on track. He was on the verge of getting paid before the walkers arrived and he’s ready for his second chance. Daryl and Strand alone would keep Jim flowing in the green for years.

The second Jim hears Sarah on the radio you know what’s going on. Wendell and Sarah kidnapped Jim for his beer recipe. That was not a solid plan. But it’s all good now that Morgan brought him back to them. Turns out they’re not really such Good Samaritans after all. They stole the truck and supplies since the real driver of the take what you need movement was too predictable with his route.

Morgan realizes he’s shared too much about Alexandria. It’s a little frustrating how every time Morgan tries to open up, he gets burned. Althea and John had to hang out with Morgan for weeks before they got much of a peep out of him. Now with these random strangers he pretty much shares his life story. This won’t do much to help his cynicism.

The truck gets weighted down so it’s time to lose some cargo. Jim sizes up his options and agrees to partner with Wendell and Sarah on the beer, but while pleading his case, he accidentally sends Morgan down into a nearly dried out stream. And with a slew of walkers surrounding him, Morgan hops atop a car as the walkers have now forgotten how to climb. Wendell and Sarah force him to give up the Alexandria details before saving him. Thankfully, Morgan wasn’t stupid enough to give them the real information since they left him.

Morgan gets on the radio to explain why he didn’t return to Alicia, Strand, etc. He’s a coward and thought they needed something he couldn’t give them? That was a tad weird as Alicia’s clearly the leader that group needs once she recovers from grieving Nick. Strand is the salty wheeler and dealer. Luciana is the infantry. John is the quick draw gunslinger with June the nurse. Althea is the transporter and Charlie is the forager. What does Morgan provide exactly?

After meditating for way too long, Morgan realizes he can just hop over the walkers. Ironically, he finds the contents of a take what you need box and uses a knife to free himself and a street sign to kill walkers. It’s no staff, but it’ll do in a pinch. 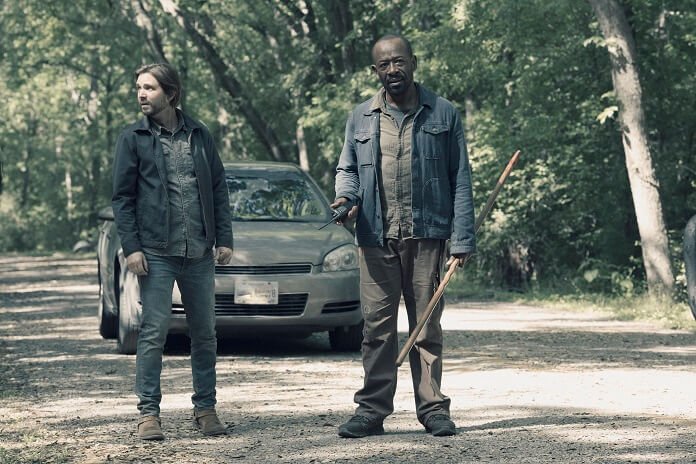 Wendell and Sarah find Morgan walking along the road. They’d gone a couple hundred miles before realizing his directions were bogus. Morgan uses the power of his indomitable will to convince them not just to kill him, but to help him find Alicia and the others before they can go to Virginia. And along the way back to Texas, they’re going to drop off some of the boxes too.

The Walking Dead can be a cynical universe. It operates on the basic principle that out of every 10 people, 9 are despicable murderous cretins. The remaining one wants to do right but gets killed off. The Code suggests that even the worst people can change given sufficient incentive. I’m not sure if that will work in Morgan’s case. If nothing else there’s three more people to get killed off in the dramatic season finale. Hopefully the ride will be fun in the meantime.