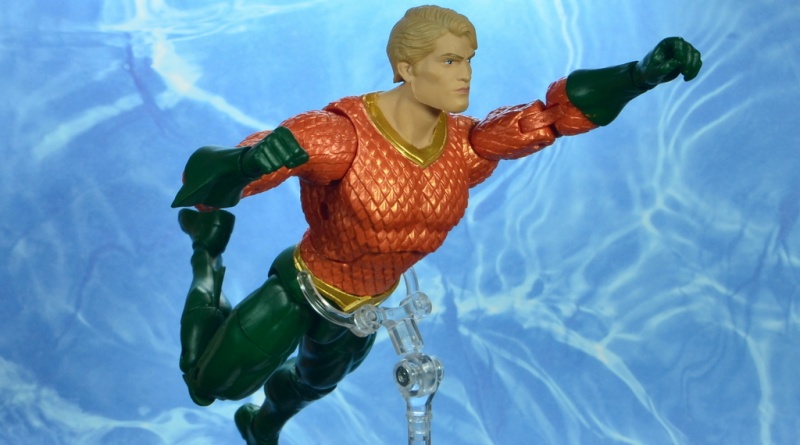 Aquaman is having a pretty good 2018. His comic book remains one of the most fun in the DC Rebirth era. He’s starring in a feature film this December and he’s getting a ton of figures like today’s feature, the DC Essentials Aquaman figure.  With DC Collectibles recently releasing a Rebirth era Aquaman it’s time to see how this new version compares and which one is the true king.

Packaging:  One of the benefits of the DC Collectibles lines is seeing how the various packages line up next to each other. Aquaman has a yellow orange accent against the white. It does have a nice degree of shelf pop.

There’s nothing to discuss this outfit and the character’s history. I’m pretty sure the first wave of DC Essentials had a token reference about the character. Now the write-up area is just DCC patting itself on the back. At least the figure is easy to pull out of the package. 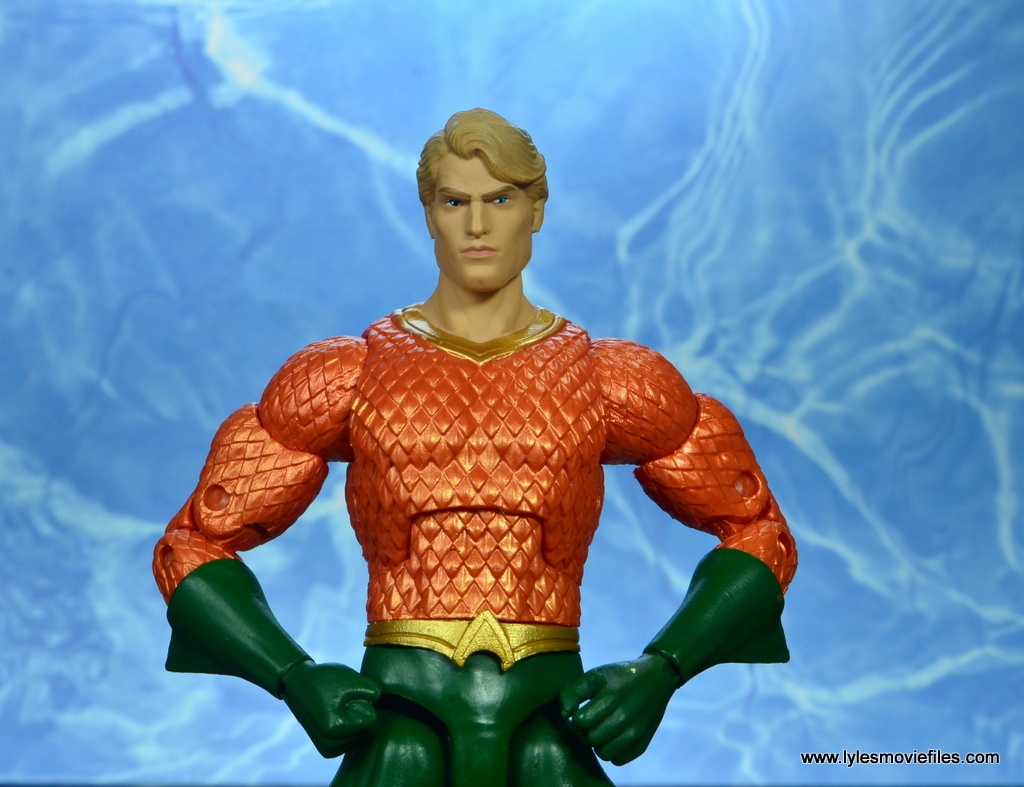 Likeness:  This version of Aquaman skews to the more modern Rebirth appearance… before he started growing his hair and beard out again. That means a gold collar and extended A on the belt. Beyond that, this figure retains all of the classic components of the character.

For all the concerns with DC Collectibles re-using parts for the line, Aquaman has all the necessary dedicated sculpting elements like the chainmail shirt and fins. The chainmail looks outstanding with a nice layered appearance.

When the Essentials line was debuted, Aquaman had easily one of the best head sculpts. There’s some softening from the prototype with less defined cheekbones and chin, but otherwise this is still a good looking figure. 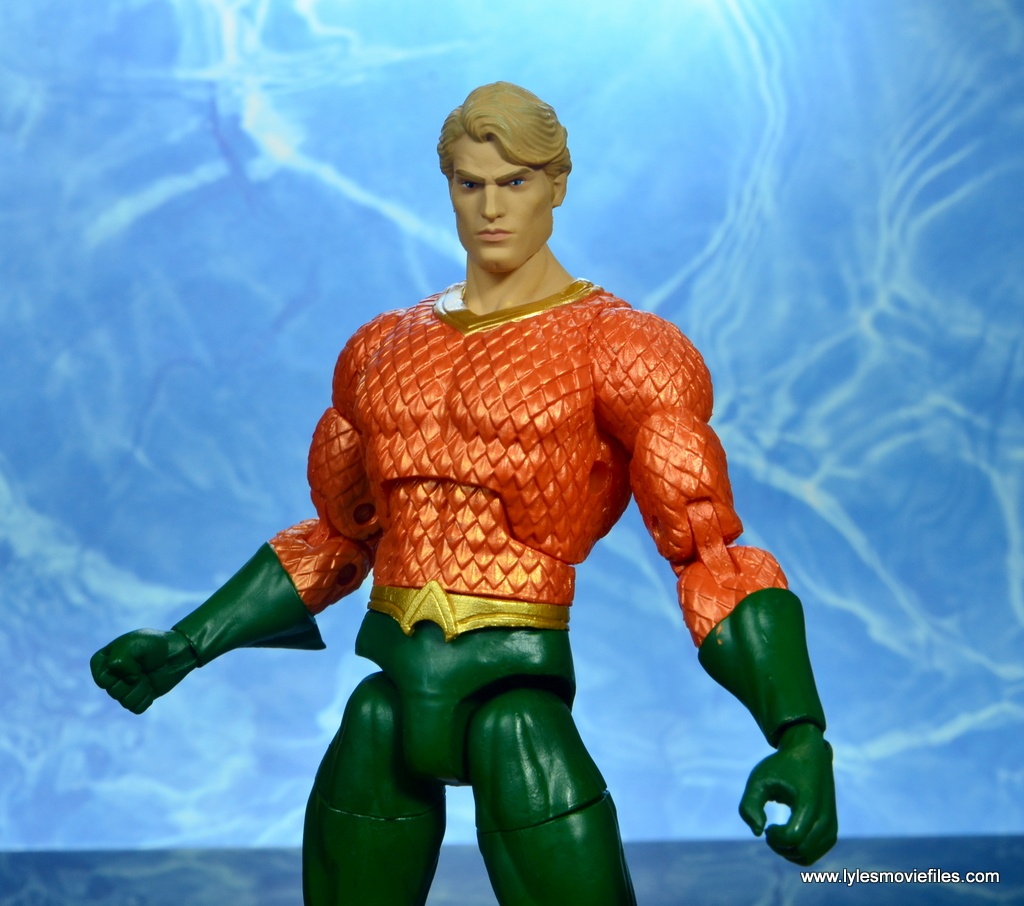 Sculptor Paul Harding has infused the right amount of personality to the respective characters and Aquaman looks nice and contemplative.  He has a definite heroic look to him.

Scale:  Just to keep people annoyed, the Aquaman is on the same seven inch scale as the other Essentials figures including Superman. DCC isn’t as focused on scale as say Mattel is with its WWE line. 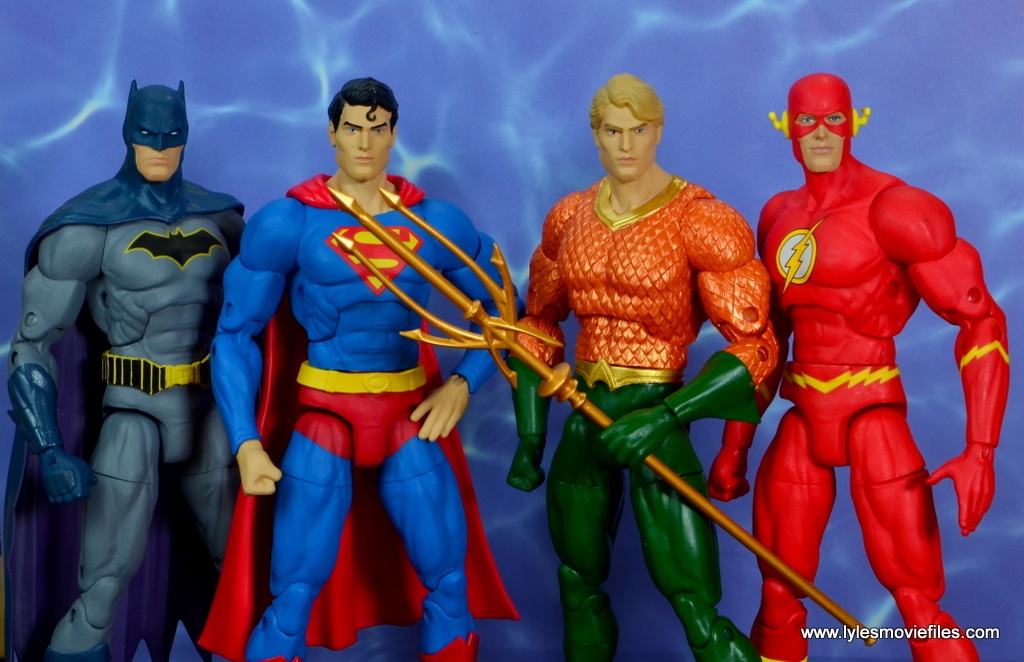 Paint:  With this line, I haven’t seen a lot of paint problems outside of Deathstroke. That pattern continues with Aquaman. DCC went with a shiny metallic paint for Aquaman’s orange shirt and a consistent shade for the collar and belt. I only noticed a slight bit of orange slop on the left glove.

Maybe it’s just me, but I wouldn’t mind Aquaman getting a darker shade as he looks so pale the blonde hair doesn’t register as strongly as it should.

Articulation:  Here’s the big selling point of the Essentials line — the super articulation. Aquaman can handle any kinds of swimming and combat poses. I really wish DCC had given him some alternate hand sculpts so he could summon his aquatic friends and really sell the swimming illusion. 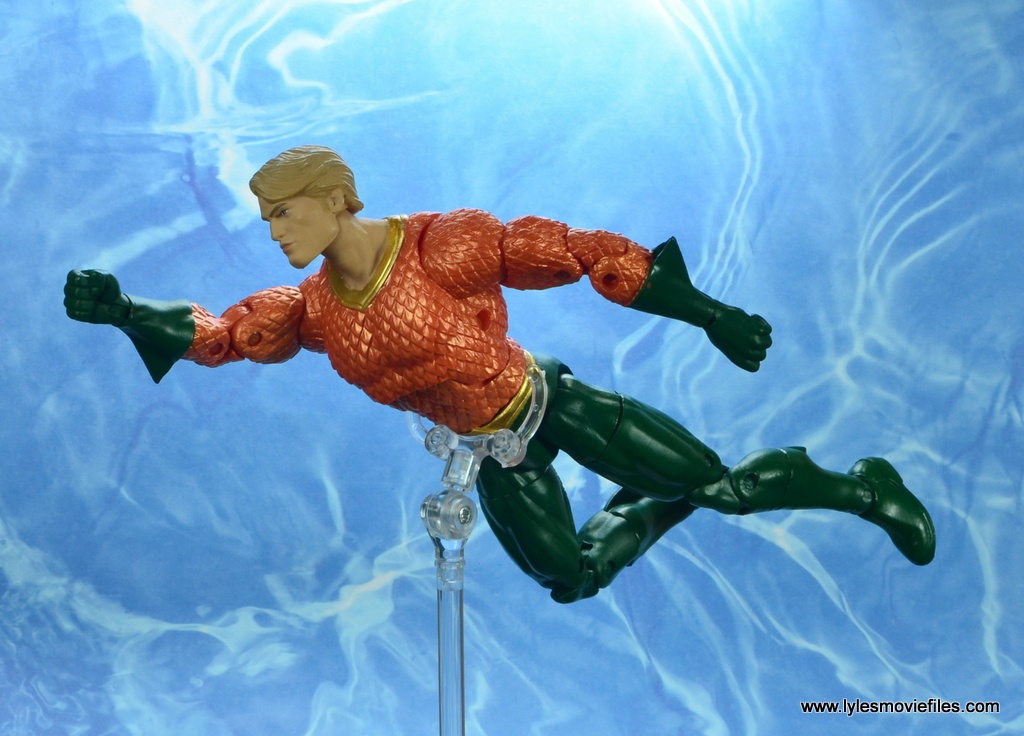 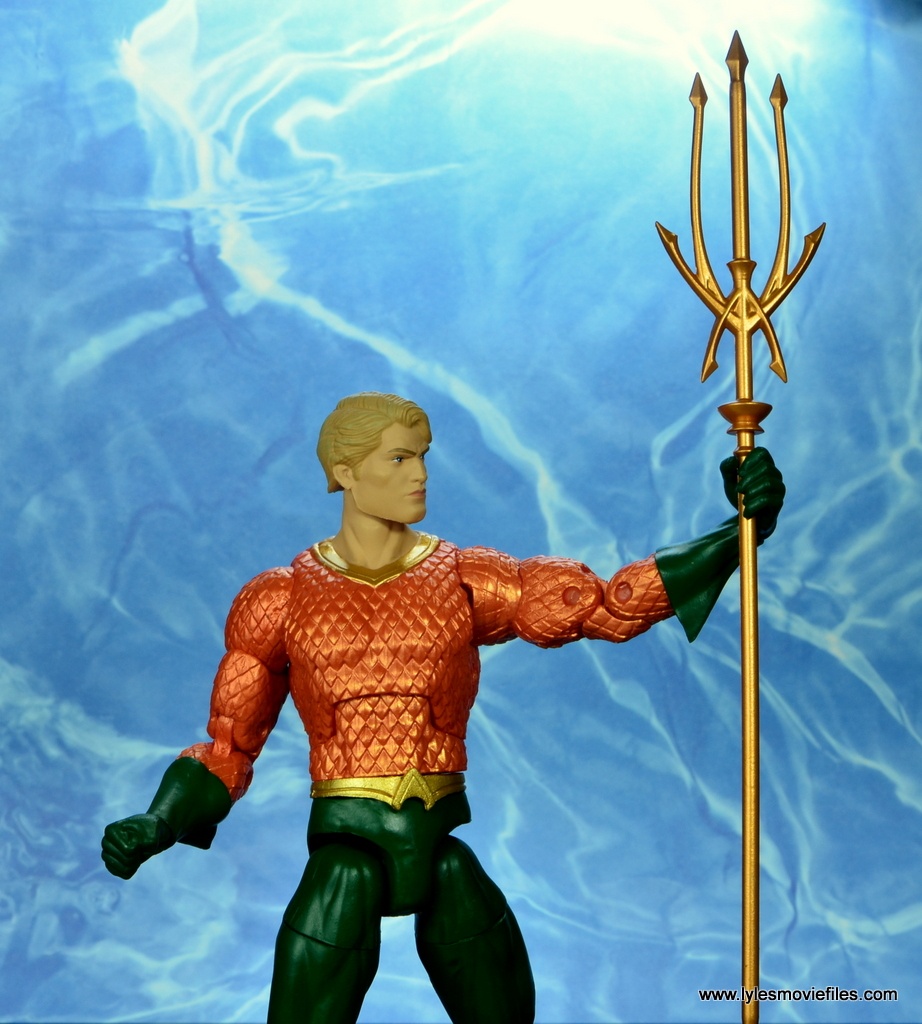 Accessories:  Hey now, maybe it’s too early to give up hope in this category? While the norm has been minimal/no accessories for this line, Aquaman gets his signature trident. It’s scaled appropriately with a surprising level of detail right down to the A in the mid-section. Aquaman only has one open hand though so you can’t pull off the full stabbing gesture with it. 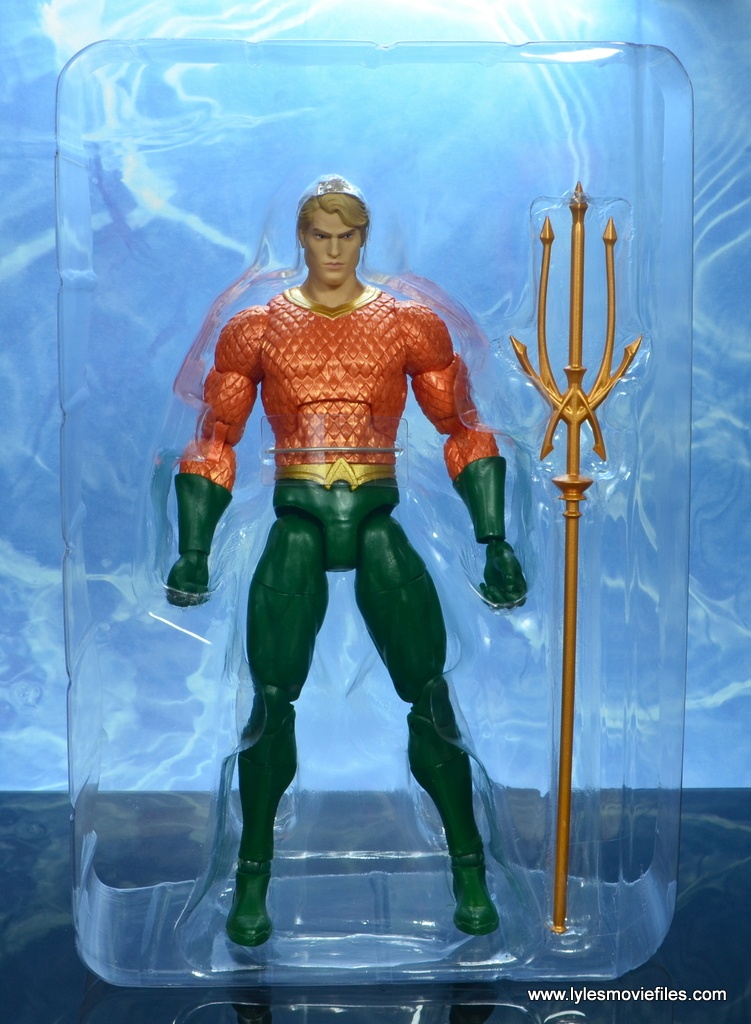 So to recap, Aquaman would benefit from an alternate set of swimming hands, another open gripping hand at least. I hope DCC considers releasing an accessory pack with some of these essential bonus parts. 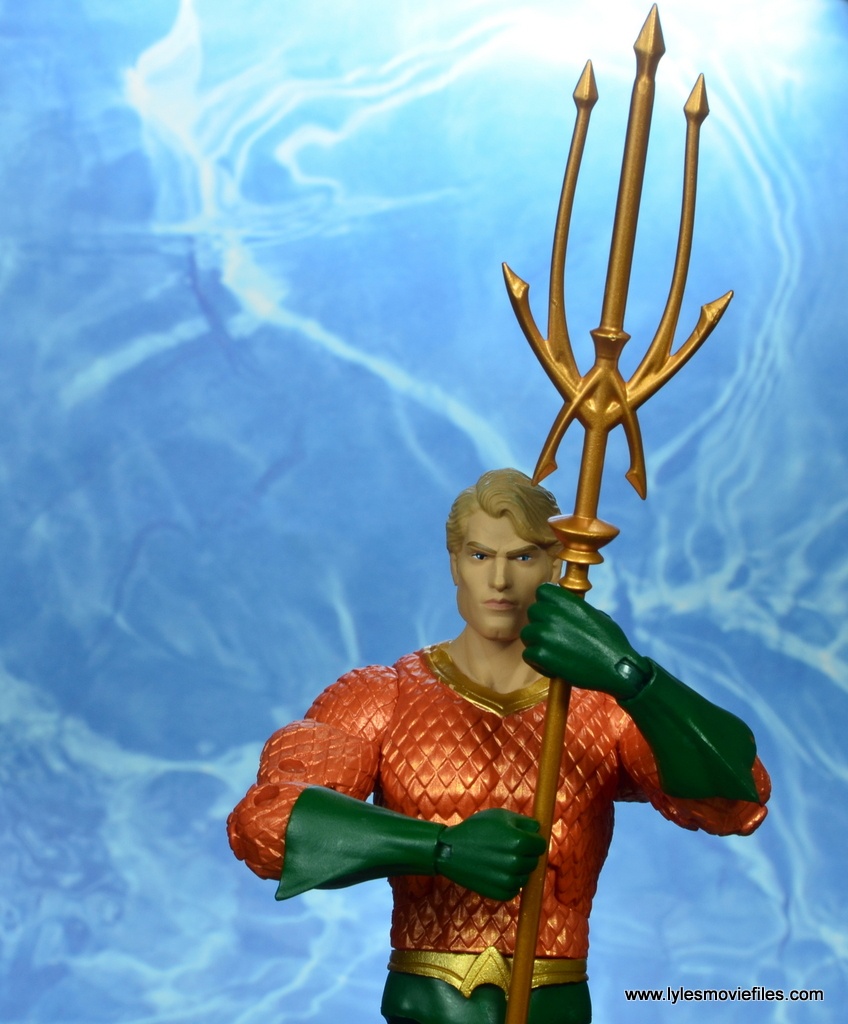 Worth it?  Clocking in at $26 without multiple accessories or a Build a Figure part is a tough sell. I like the figure and he’s a better value than the Icons figure, which lacked size and some useful articulation.

Having a significant accessory helps Aquaman come off as a better value than some of his Justice League pals. This is DCC’s definitive take on Aquaman and well worth grabbing for fans. 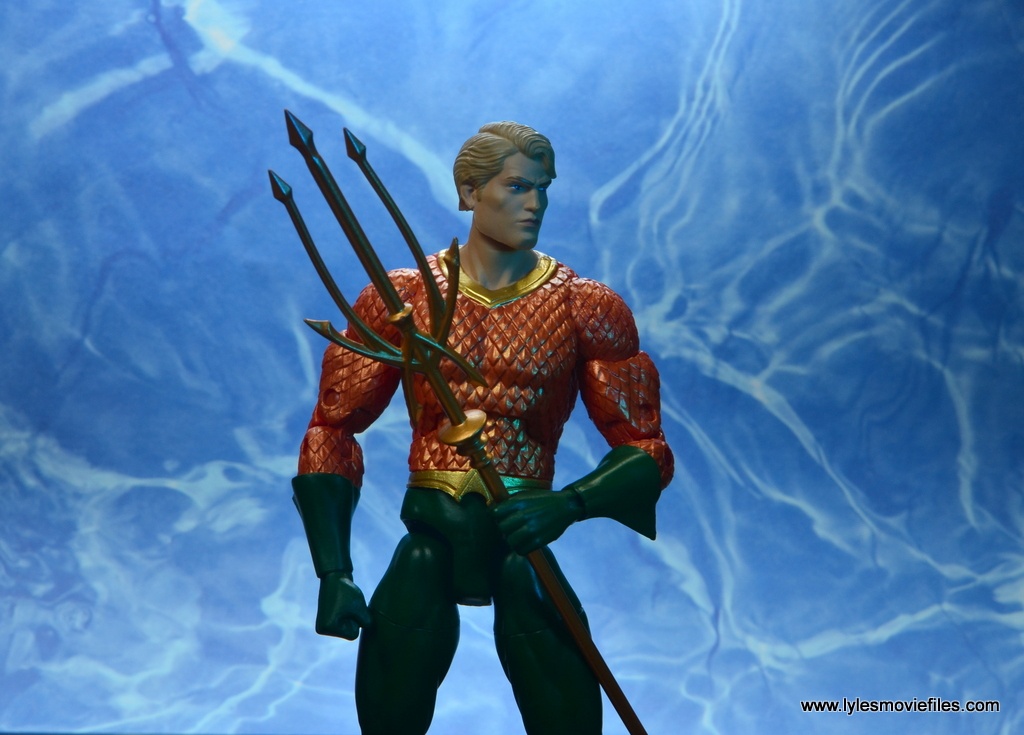 Where to get it? Comic book stores are your best friend here. Sure, you could pay marked up prices on Amazon or eBay, but why would you?