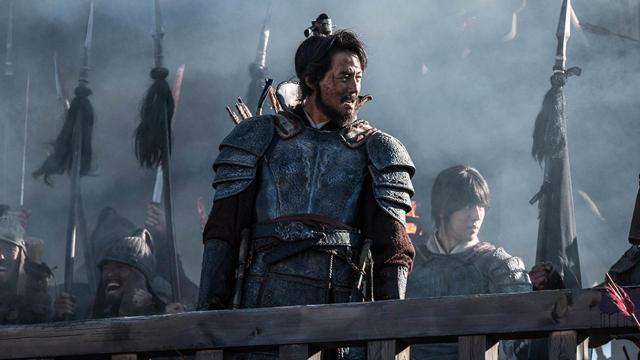 A lot of movies try to be epic. Most fail miserably making a film with a not so humble title like The Great Battle even more special.

It’s been a while since the last great siege defense battle scene. Zack Snyder’s 300 was pretty great, but the last one to set the standard was The Lord of the Rings: The Two Towers. Peter Jackson basically crafted the end all/be all of valiant heroes desperately fighting against an indomitable army constantly raising the stakes to overthrow their fortress.

If you can imagine a film featuring multiple Helm’s Deep battles you’ve got a good idea what’s in store with The Great Battle.

The film is based on the 80-day siege of Ansi Fortress during the 600s where Yang Man-chun led Goguryeo troops in repelling the 500,000 plus Tang dynasty soldiers.

Right from the opening scene Director Kwang-shik Kim crafts one incredible action sequence after another. Any one of the major action sequences would be the epic final battle in most war films. Kim might be indulgent with the slow motion and video game-like zooms, but they bring a certain sense of vitality and energy to the fight scenes that make them exhilarating.

After the opening battle, the film slows down a bit. Sa-Mool (Nam Joo-Hyuk) is sent to Yang’s outpost to infiltrate Yang’s (Zo In-Sung) camp and assassinate him for failing to aid in a disastrous Goguryeo campaign against the Tang army.

It doesn’t take long for Sa-Mool to question his orders as Yang proves to be a kindly and charismatic leader who long ago earned the respect of his troops. As much as the walls fortify them against invaders, Yang is the heart of the fortress and emboldens them to face insurmountable odds.

Joo-Hyuk does a solid job of showing this conflict of duty and a growing admiration for Yang. In-Sung humanizes a legend managing the challenge of making Yang both larger than life and a man of the people. Bae Sung-Woo, Park Byung-Eun and Oh Dae-Hwan have strong supporting roles as Yang’s lieutenants. Park Sung-Woong makes for a terrific smug bastard as Li Shimin, the emperor of the Tang army.

Commendably for a war film, the women have more to do than sit and watch the guys on the battlefield. Nope, in The Great Battle they’re slinging arrows, slashing with swords and just as importantly, being treated as viciously as any other player on the battlefield. Kim does this in a way so it’s not gratuitous, but the reality of war.

Seolhyun has a key role as a leader of an archery unit who also happens to be Yang’s sister and the love interest of cavalry leader Paso (Um Tae-Goo). The film doesn’t treat Baek-Ha or her unit with kid gloves and they’re just as capable as any other soldier. One of the film’s standout scenes features Baek-Ha causing some major damage to the Tang soldiers.

At two and a half hours, the film certainly has an epic length, but it never loses steam. That smooth pacing is especially helpful for Western audiences who will appreciate the prolonged action sequences with shorter subtitles. There’s just enough character development to get invested in the characters and care when some of them get killed.

The Great Battle truly earns its title and provides plenty of blockbuster thrills. It’s an easy recommendation for war genre fans and those looking for a throwback action film where combat is waged with flaming arrows and swords instead of guns and cannons.