First Man feels like a film very much designed with Academy Award voters in mind. Director Damian Chazelle constructs a technical marvel with some incredible imagery and a commendable commitment to creativity over CGI, but it lacks the heart to truly be memorable.

The film centers around Neil Armstrong (Ryan Gosling, reuniting with his La La Land director Chazelle) and the U.S. efforts to get the first man on the moon. In 2018, it’s hard not to watch this massive use of resources and loss of life and question was this really just to beat the Russians in saying ‘First!’

Back in the 1960s, the Space Race was a major deal, but First Man doesn’t do enough to really sell the significance for both nations in getting to the moon first. It makes the end game somewhat understated when it’s portrayed more as a mission instead of a pursuit of some seemingly impossible goal. 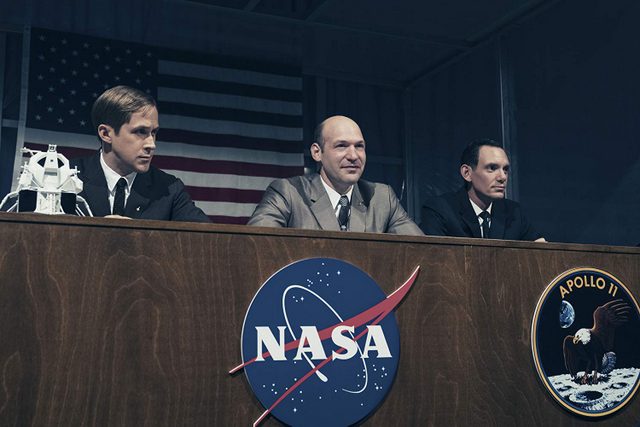 First Man suggests Armstrong essentially went into a shell following the death of his infant daughter. Singer’s script asks the audience to consider his thoughts instead of sharing them. Armstrong was a product of his times and isn’t one for sharing his innermost thoughts. That hurts in a film that tries to present him as more three dimensional. As it stands, he just comes off like a detached person who’s an absentee husband and father even when he’s home.

Claire Foy (The Crown) ends up doing most of the film’s heavy lifting as Armstrong’s increasingly frustrated wife, Janet. It’s Janet who has to keep the family afloat while Neil is too distracted or uninterested in being involved in his household.

Another underlined issue with the film is the time period seems like such a relic with the women doting on their husbands as they do the ‘real work’ and few minorities in sight. Yes, it’s a time capsule of a particular point in American history, but First Man doesn’t do enough to show other sides of 60s America save one black poet questioning sending white men to the moon with so many problems in the nation.

Singer doesn’t dive deep into Armstrong’s psyche to connect the dots that space is Armstrong’s obsession and focus after his daughter’s death. That wouldn’t excuse him for being such a lousy husband, father, friend and co-worker, but it would at least offer some explanation.

Gosling isn’t a showy performer in general, but this role requires him to speak softer and have little presence. That results in several scenes where Gosling barely registers when sharing scenes with co-stars Foy, Jason Clarke and Corey Stoll in particular.

Stoll offers so much needed energy as fellow astronaut Buzz Aldrin that it raises the question if Aldrin wouldn’t have made for a better central character. True, Second Man doesn’t have the same ring to it, but it probably would have led to a more interesting film.

Chazelle shoots much of the non-space segments like 8 mm home videos with jumpy movement, jarring close ups and distracting focusing on character faces. It provides the desired effect of a vintage visual, but it quickly grows tiresome.

While Armstrong the man is underwhelming, Chazelle does a far better job of conveying Armstrong the astronaut and the very real danger associated with the space race. The astronaut POV scenes are amazing and brings that sense of claustrophobia, the lack of control and wonder all at once. There’s no shortage of space films, but Chazelle still manages to make it feel new, exhilarating and dangerous. 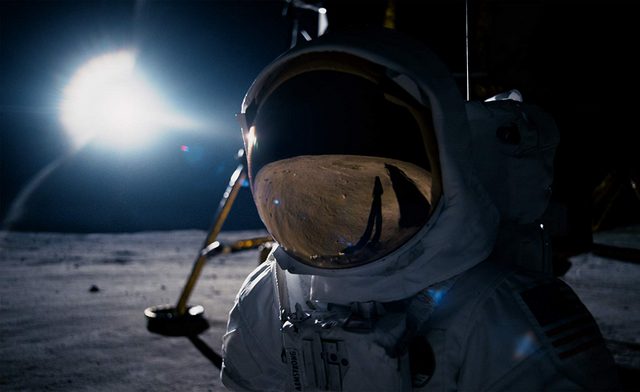 When Armstrong and Aldrin land on the moon it feels like a well-earned, long awaited moment. This is First Man at its finest complete with mesmerizing viewpoints of the moon that puts viewers in Armstrong’s suit as he descends onto the surface for one giant leap for mankind. It’s spectacular and the biggest reason you should see the film in theaters.

But is it enough to justify the lengthy run time, which feels longer than 141 minutes? That largely depends on your interest in getting a sense of being in the cockpit during a space expedition. It’s a revelatory experience, but it’s too bad First Man offers so few insights into the man behind this historic achievement.