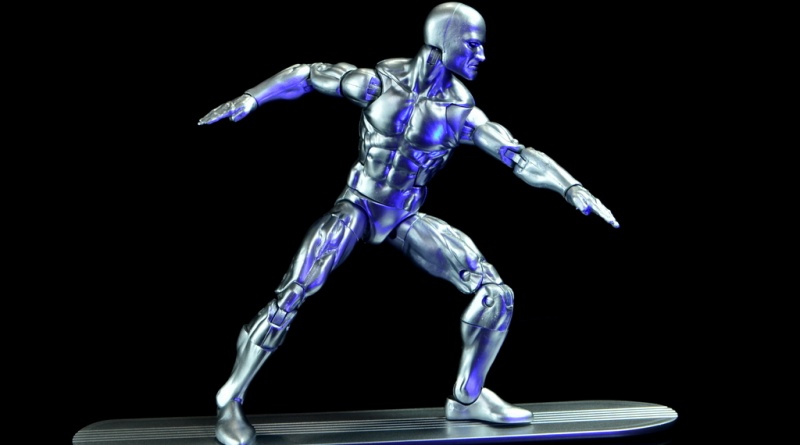 Every so often things work out for you as a collector. I’d placed an order on Walgreens.com for their Marvel Legends Silver Surfer only to get it cancelled. Three days later I find it in stores minus the ridiculous shipping charges. I’ll chalk that up as a big win. Let’s catch the wave and see if this Hasbro take on Norrin Radd was worth the wait.

Packaging:  At this point I think we’re all in agreement that the Walgreens exclusive line was basically a Fantastic Four wave spread out over months/years. Silver Surfer maintains the black and blue color scheme. That makes spotting the figure on the pegs from the top harder since the black and blue lettering don’t play well with each other. 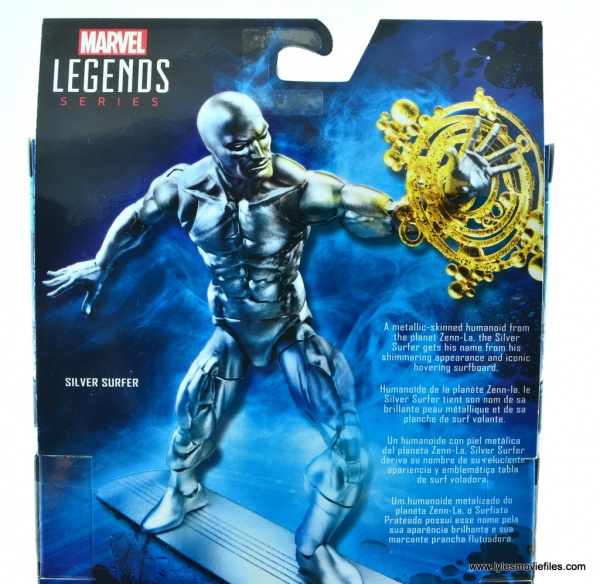 The side portrait is in full color, which has become more of a trend with the latter half 2018 releases.  Sufer’s bio offers a nice summary of the character without explaining his past with Galactus and connection to the Fantastic Four. 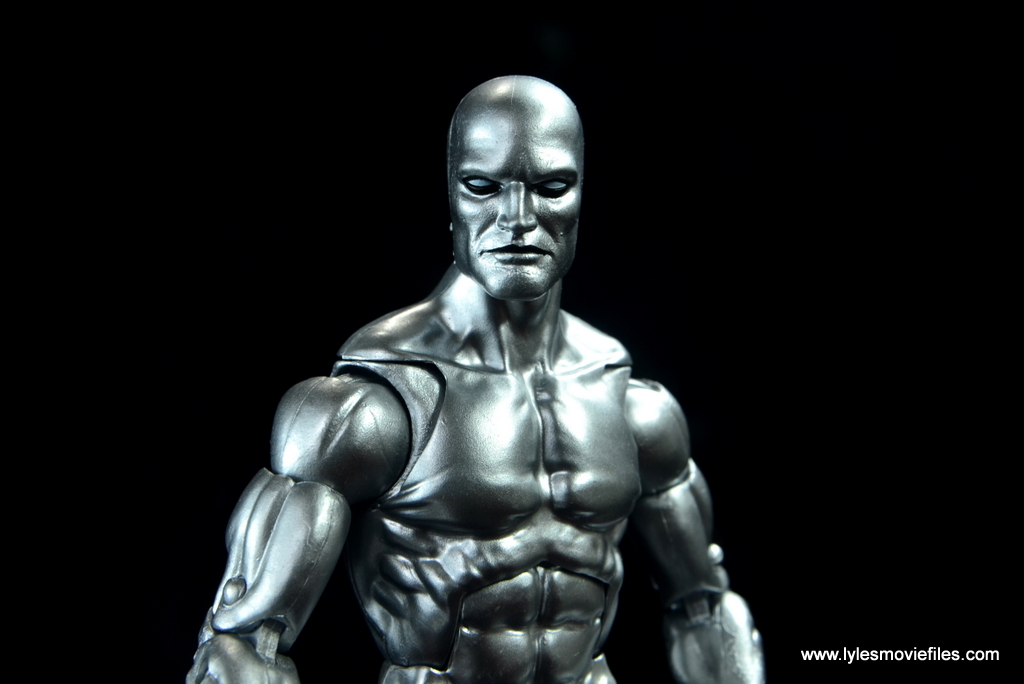 Likeness:  With a chrome dome and sunken eyes, Surfer looks alien enough. Clearly the gist of the likeness if from the paint job, but the figure embodies how I envision him looking. 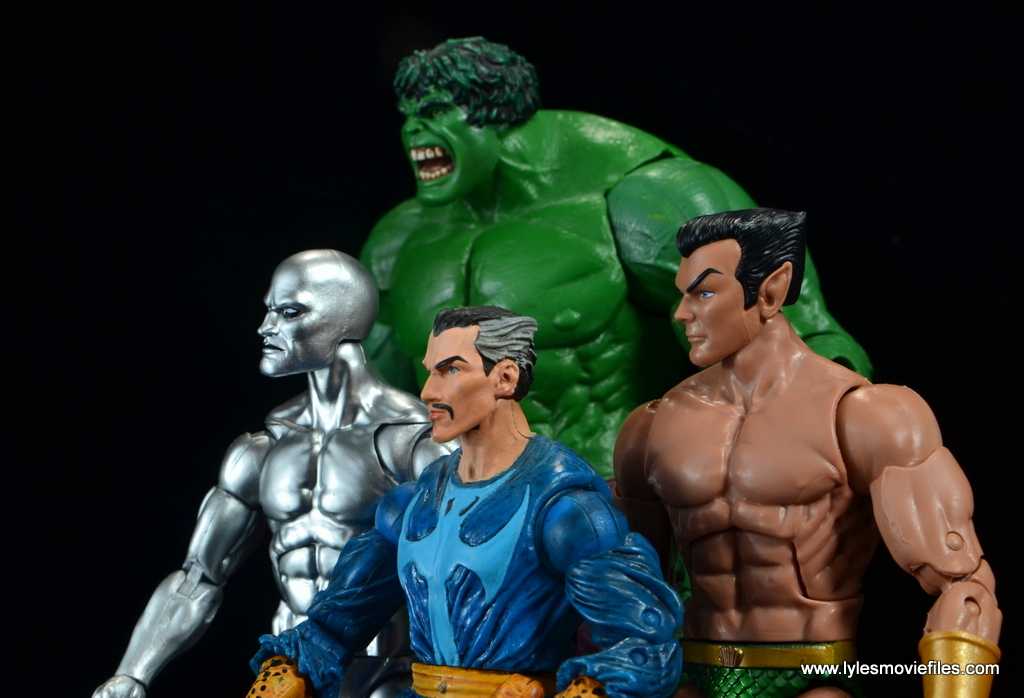 Scale:   Silver Surfer uses the Sunfire buck. I’ve read a lot of collectors don’t like this choice and wish he were bigger. I’ve never viewed Surfer as a particularly thick guy so this makes sense to me. I definitely wouldn’t want him using the Grim Reaper body as that’s too big for him. 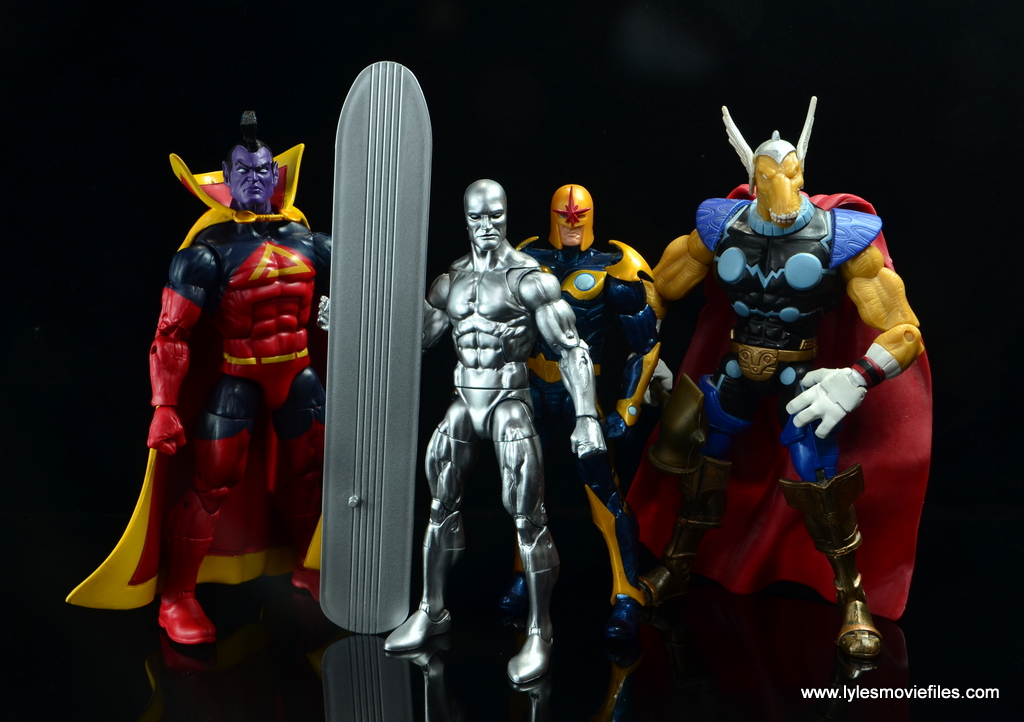 His height is another story as he’s a tad shorter than Human Torch and Mister Fantastic. Ideally, he’d be taller while having the same slender frame…just like a surfer. 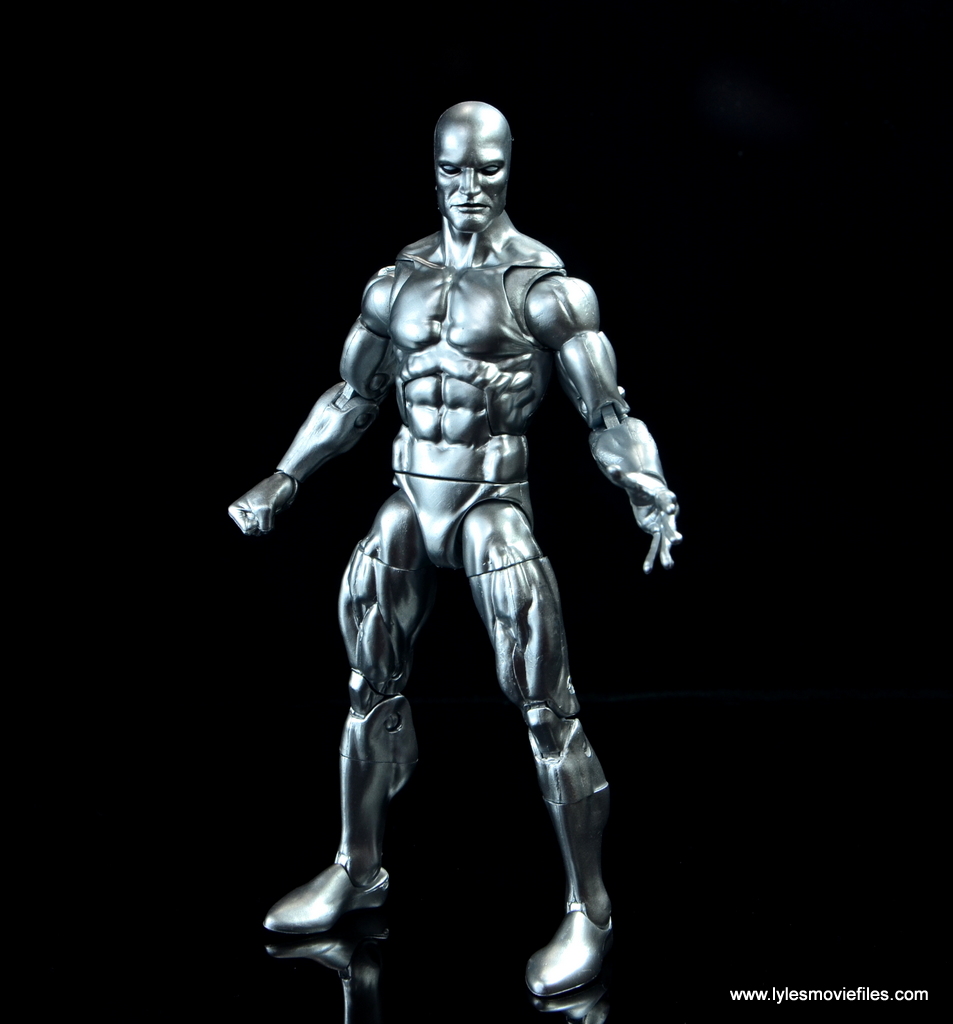 Paint:  Here’s where this guy earns his name. Hasbro opted against a silver chrome finish and instead went with a silver paint job that has just the right amount of sheen without making him a mirror.

Consistency is the key here and there’s no fingerprints or other weird marks throughout the figure. It’s nice and smooth baby. The only switch in color is the black around the eyes to further the sunken look, plain white eyes and a black upper lip. 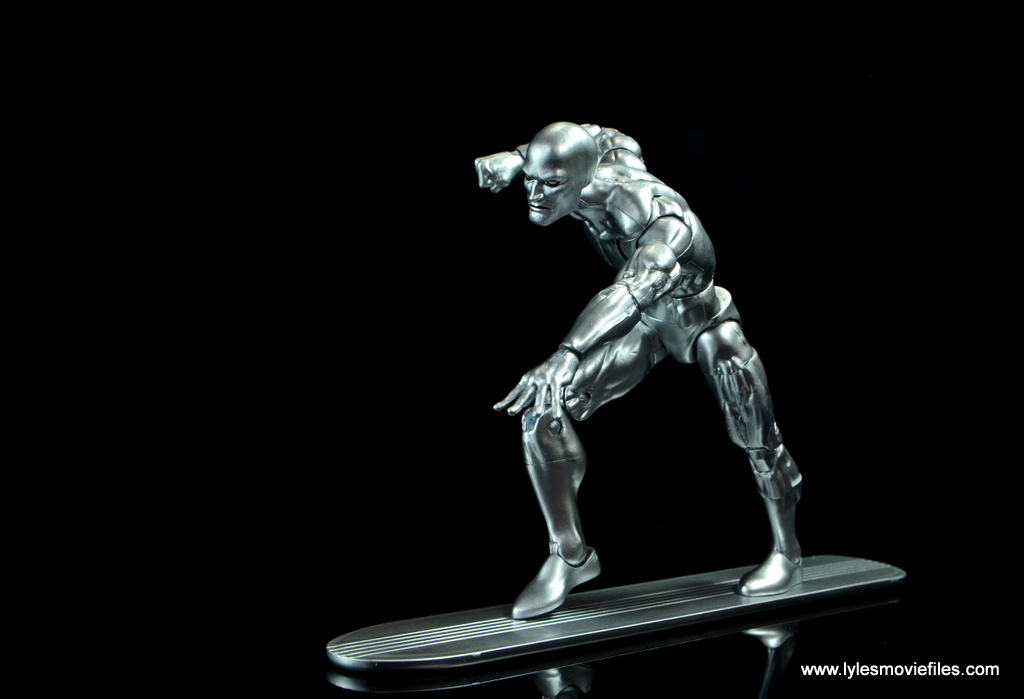 Articulation:  The Sunfire base body allows for some very effective posing. Surfer can handle any hang 10 poses you can imagine and launch his power cosmic in some dynamic ways. Again, his only real limitations are your imagination. 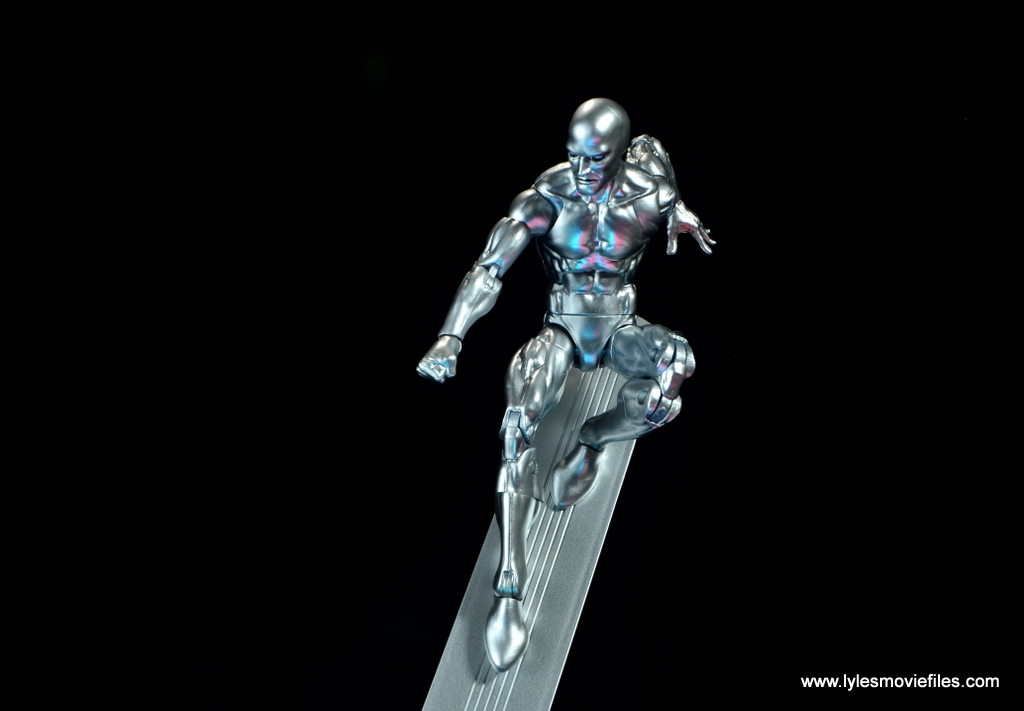 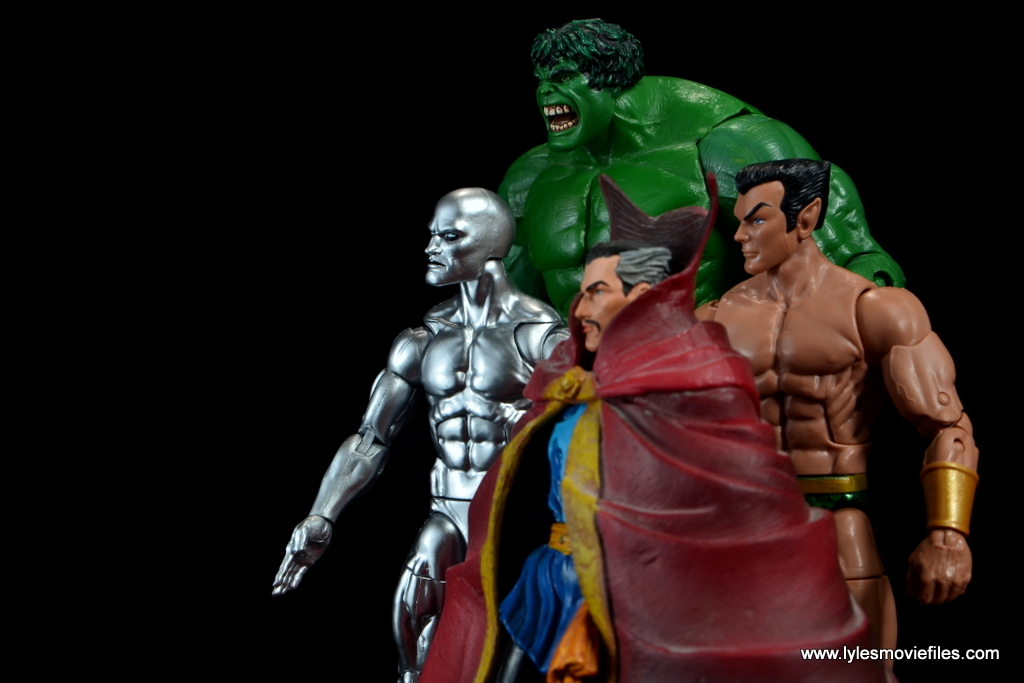 Accessories:  For starters, Surfer comes with his most important accessory — his surf board. It’s too thin for others to hop a ride on with him, but I’ll imagine he enlarges it as needed. The board is cast in a duller shade of silver so there’s some distinction here. 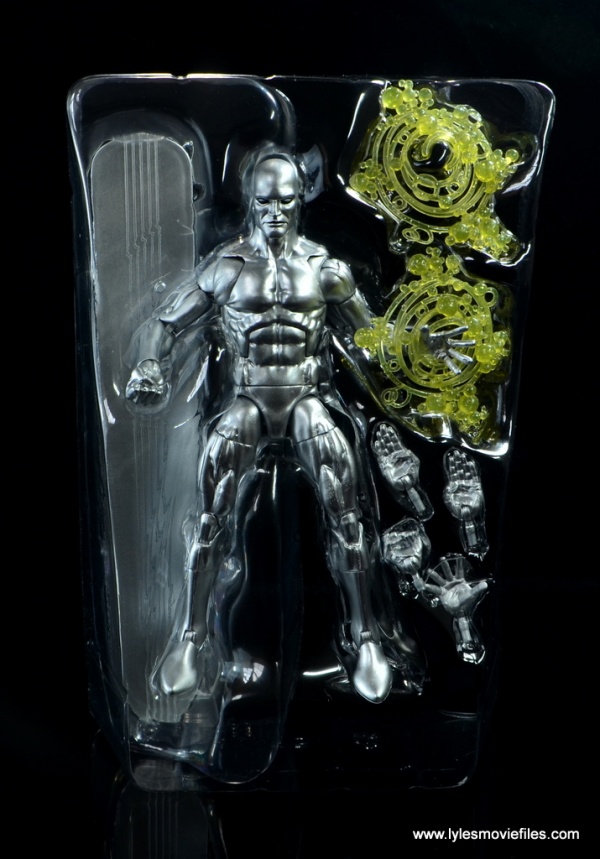 But Hasbro went the extra mile and included two other pairs of hands — one a hands outstretched to better enact surfing poses and fists/gesturing/power blasts hands. That really adds to the value of the figure and display options. 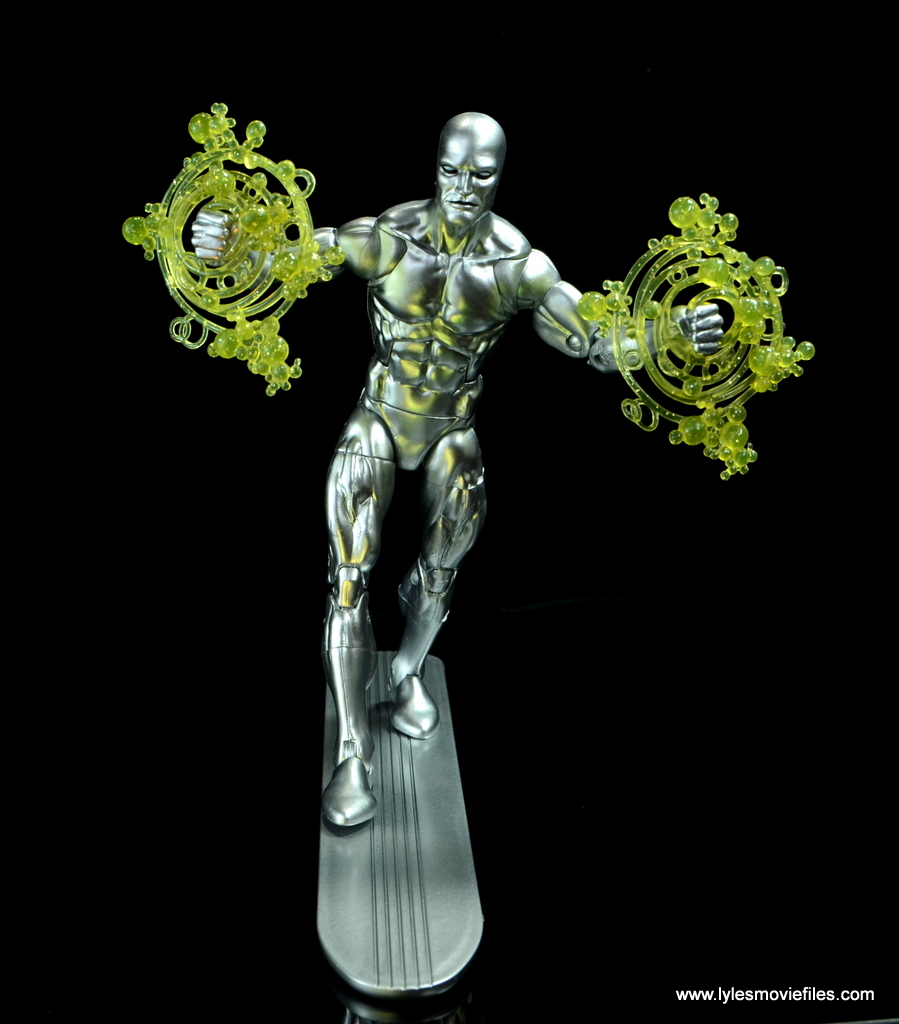 Finally, there’s a pair of energy blasts, which is the closest to the Kirby crackle. They’re cast in translucent yellow this time and are an ideal inclusion for Surfer. The one ‘missing’ accessory is a stand for the board. 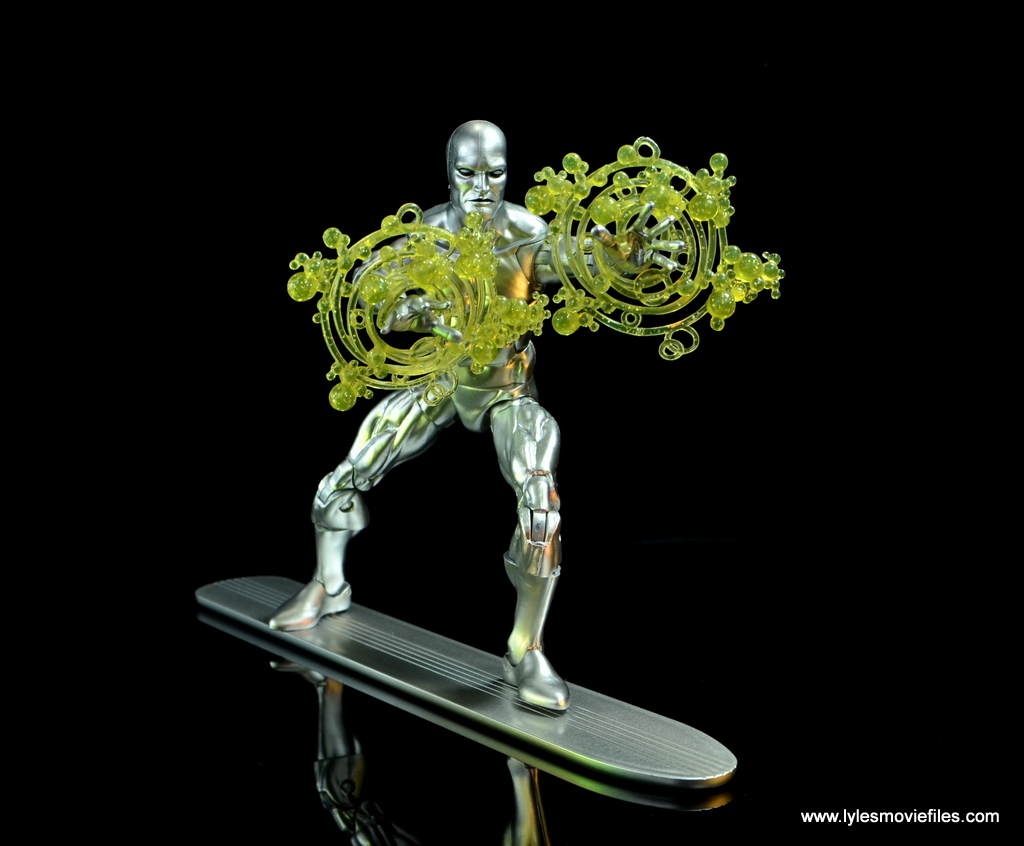 We didn’t get that with other gliders like Green Goblin or Hobgoblin so that’s not a surprise, but it is really missed here. Time to track down some appropriate figure stands. 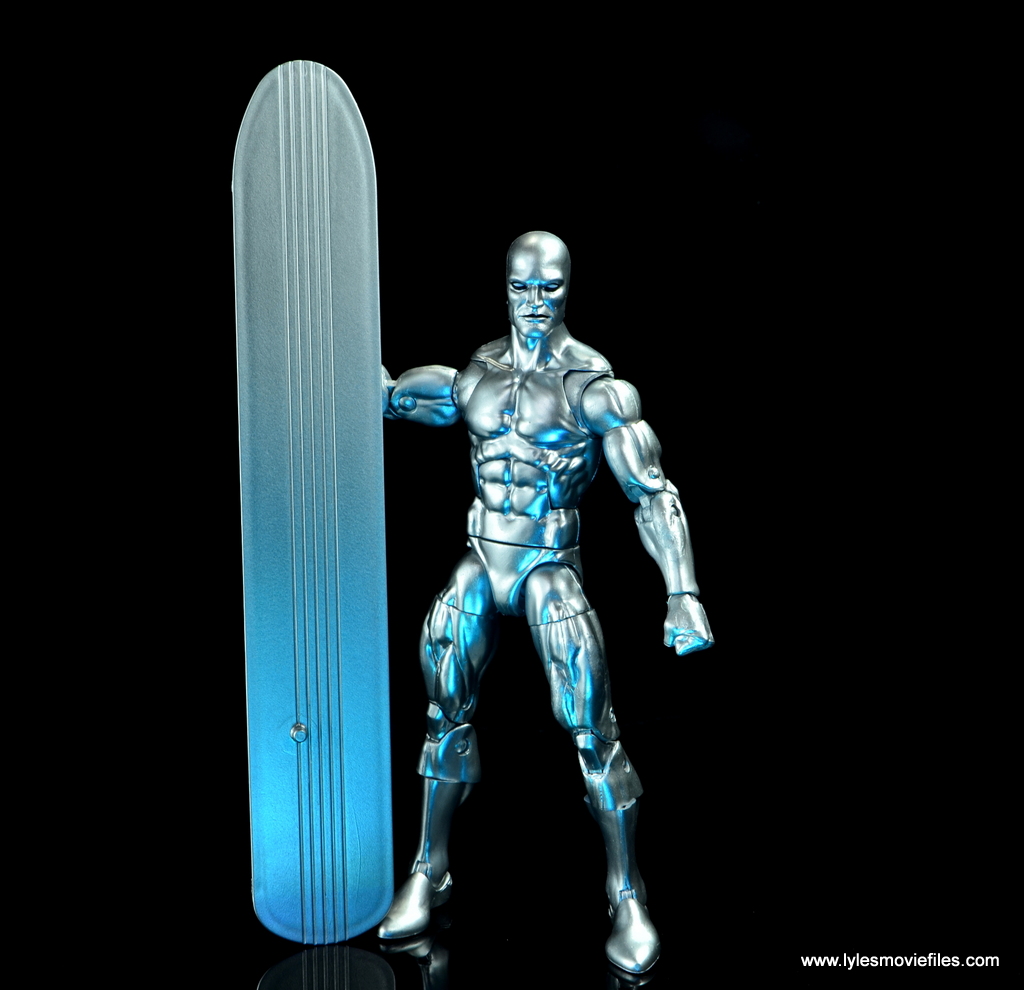 It also would have been nice to have some sort of strap on the bottom of the board so Surfer can stand it up when he’s not riding. 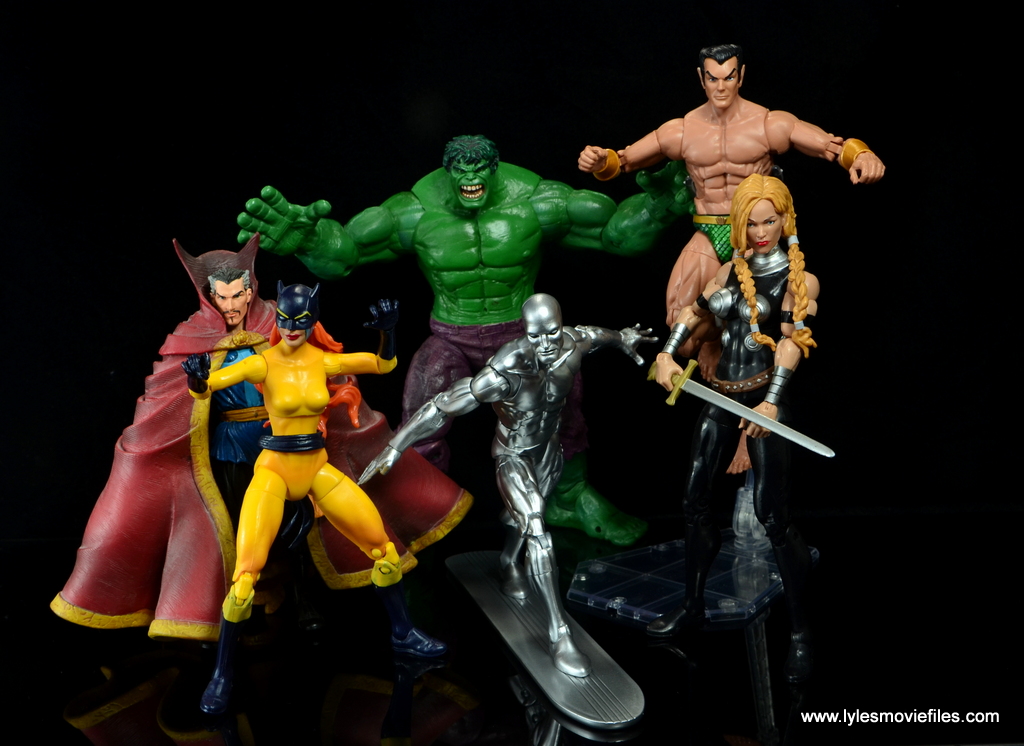 Worth it?  Silver Surfer clocked in at $22. That’s more than the standard ML that also gets a Build a Figure part. But in terms of store exclusives, Surfer packs a great value since he’s more than a figure. 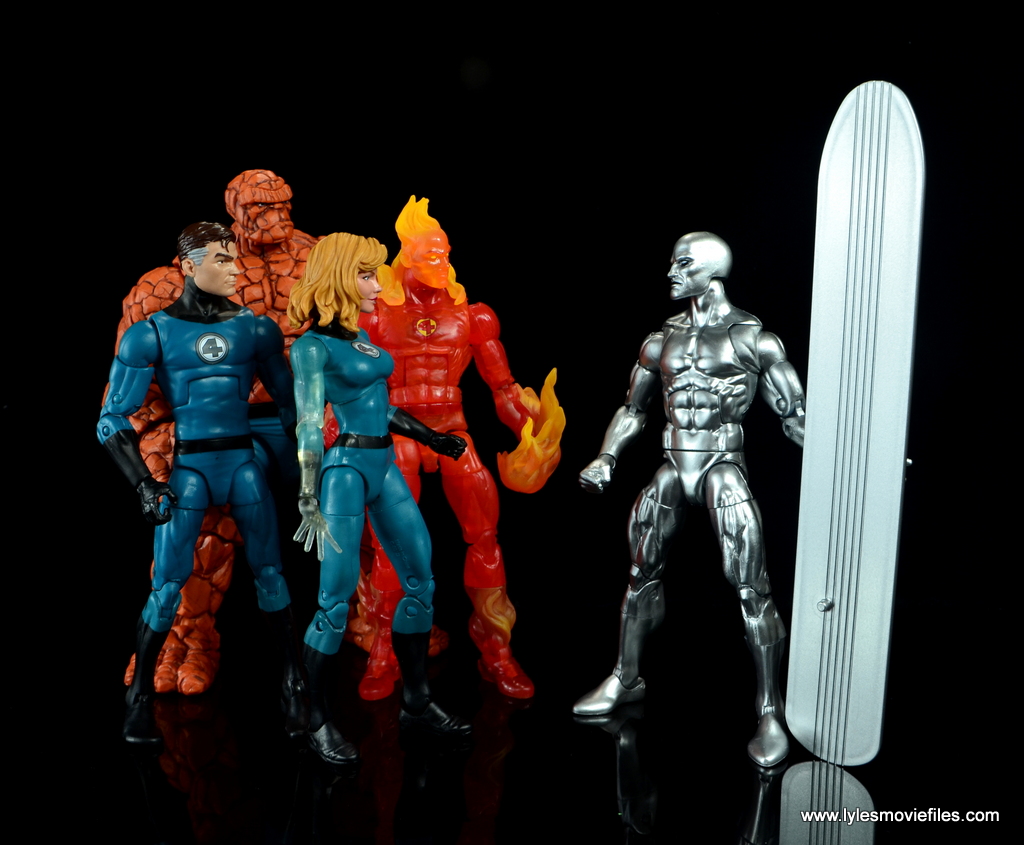 The lack of a stand proves somewhat annoying for him, but otherwise Silver Surfer is a very high quality figure. I don’t care about being a broken record — this is the best time to be a collector of Marvel figures right now thanks to the outstanding consistent work from Hasbro right now. 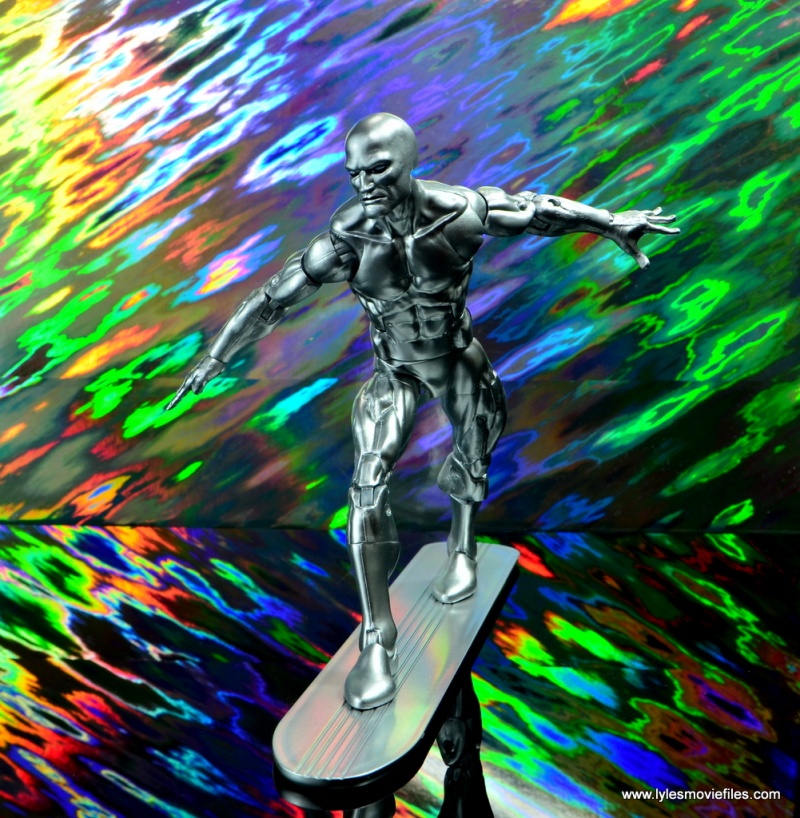 Where to get it?  Walgreens is the most sensible option here. Amazon re-sellers will eventually put him up, but Walgreens does an exceptional job of stocking its exclusives.