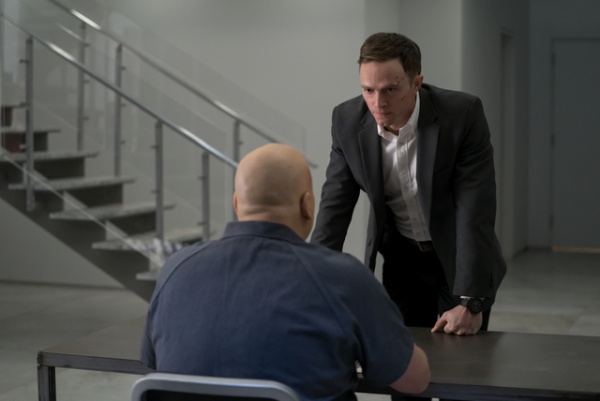 Blindsided dialed the intensity up big time in the best episode of the third season so far.

Poindexter hoped to rattle Fisk with an early morning check up, but Fisk isn’t big on surprises and was already waiting on him. We’re starting to see that Poindexter is realizing Fisk is not a typical common crime lord and Fisk’s eerie coolness is stoking his curiosity.

Matt goes back to his place to get suited up…well, a three piece suit at least. He’s headed to the prison to get some leads on Fisk’s link to the Albanians, specifically why he ratted them out. Using Foggy’s name to gain access and dragging up Fisk’s name seems like the exact opposite of trying to keep him safe.

Sure enough, Matt ticks off his contact and gets escorted to the infirmary…for liability purposes. But the doctor is more interested in knocking out Matt than helping him. In some yet to be explained manner, Fisk saw it all via prison cameras and communicates through the room’s intercom that he knows Matt is indeed Daredevil. He was prepared to let their feud die, but Matt threatened Vanessa, which Fisk can’t forgive. Now it’s time for Matt to feel the pain.

Of all the Marvel Netflix shows, Daredevil always has the best fight scenes. They’re so brutal, physical and expertly shot. This fight through the prison is easily one of the Top 5 in the series. Matt only survives thanks to the help of the Albanians. After a brief deliberation, their leader, Vic, agrees to help Matt escape if he makes good on his promise to take Fisk down. Fisk has lined up everything according to plan, including hiring a lifer to stab him convincingly enough to warrant Fisk’s relocation to the Presidential Hotel. Matt’s only lead is the now released lifer Jasper Evans.

Foggy meanwhile is freaked out over Matt’s return and Fisk’s likely payback for Foggy’s role in his imprisonment. Marci suggests a far more interesting strategy — challenge Blake Tower for the District Attorney seat as a run-in candidate whose platform is to put Fisk back in prison.

It’s always good to see Det. Mahoney as he and Foggy always have fun chemistry. Foggy needs Mahoney’s help in speaking to the police union to get their endorsement. With so many of their pals gunned down by Fisk’s men, they get over their initial reluctance and back Foggy’s write-in campaign.

Not shockingly, Karen was pissed upon learning Matt is still alive and didn’t contact them. Matt is a lousy friend and has a lot more in common with Jessica Jones than I realized. That’s not a compliment. Karen is doing her own investigation and has found the connection with one of Fisk’s shell companies that can link him as the owner to Presidential Hotel.

Turns out Poindexter’s daring shootout wasn’t so warmly received by everyone. There’s an internal investigation into the events. Ray gives him the heads up because he appreciated Poindexter’s actions, which saved his life. Poindexter checks out the interrogation held without him and sees Fisk lied about him executing the surrendering Albanians.

Poindexter knows he’s being worked, but wants to know Fisk’s angle. Fisk also knows he’s got his claws in and shares the newspaper headline, which calls the mission a disaster. Fisk offers sympathy that Poindexter is being vilified by the press without taking into consideration his efforts saved lives. There’s a reason he’s The Kingpin.

Matt wakes up to find his cabbie is still driving and quickly picking up speed. His driver has been replaced by a guy who jumps out of the cab just in time to send it (and Matt) off the pier. That’s a crazy cliffhanger.