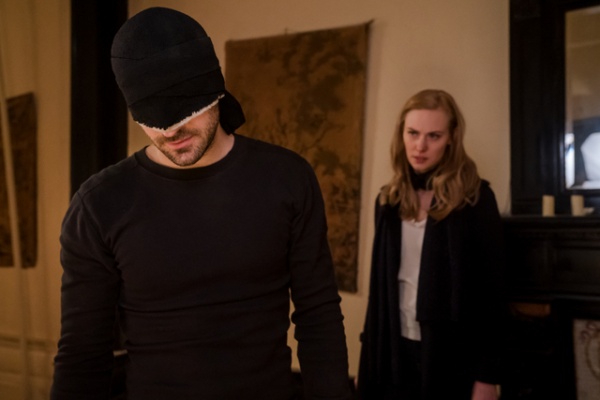 Well things have certainly escalated. This has been building all season and it more than lived up to the hype. Seriously, taking the Marvel Cinematic Universe approach of adapting popular comic arcs was long overdue for Marvel Netflix, but The Devil You Know was a tremendous way to get it started.

Karen is worried people are coming to get her. Whether it’s Kingpin’s goons or the FBI, she’s got a right to be paranoid. This rustle is just Matt. Thankfully, Karen is annoyed and not so quick to forgive him. Her instincts are right as Matt just wants her help tracking down Jasper Evans. It’s bad when his friends can assume the worst in Matt and always be proven right.

Dex is in a bad way after the fiasco with Julie. But after thinking it over he realized Fisk orchestrated their meeting just for it to collapse. Dex is hip to Fisk’s game from one angle, but he’s completely missing the big picture including Fisk rocking the white suit for the subtle message of being a good person and a bright North Star for him. For me it’s just cool to see Fisk actually looking like The Kingpin again.

Fisk has fully got Dex hooked now and the poor guy doesn’t even realize it. He relays a story of how he killed his father at 12 to further draw parallels to their childhood while painting a picture of society punishing people like them. Just in time for Dex to see the new headline where he’s the scapegoat for the Fisk convo incident. Clearly, it was Fisk who set all this motion, but it’s too late as Dex has fully bought into the narrative now.

Forced to give up his badge, Dex doesn’t feel like he’s got a purpose anymore. The tapes aren’t helping anymore and he’s out of options. Just before he pulls the trigger to kill himself, Fisk calls. He shares that his mother kept the hammer he used to kill his father, an acceptance of him without shame. That’s what Fisk offers Dex. If he truly wants that, Uncle Wilson has something else for him. Felix Manning is at the door and offers him a ride.

After a chat with Foggy, Karen agrees to help out Matt and agrees with his idea that Matt needs to turn himself in. Despite Matt’s knack for being a crappy friend, Foggy insist he won’t bail on him. Karen tracks down Sister Maggie, who reiterates that Matt pushes people away when he needs them most.

Properly encouraged, Karen finds Jasper Evans at a drug house, but needs a Daredevil save. Jasper agrees to reveal all of Fisk’s plan as long as he can still be around to help his son from following in his path. At this point, I’m wondering why Matt hasn’t ditched the Version 1 costume and gone with the more tactical and protective Version 2 attire. I miss the red costume.

Ray is a good man, good enough to want to follow Foggy and Karen’s lead on Evans even if it will completely derail his new promotion. But he’s gonna need to hurry…

Matt and Foggy share a laugh over Matt’s peace offering — a new wallet — but the moment quickly fades as Matt hears screaming. Karen and Ellison are interviewing Jasper when the power goes out. That’s a terrible sign. Sure enough, Karen opens the door to find Daredevil killing her office mates. Good thing she’s still packing her gun.

Foggy unfortunately isn’t in the office and is staring at the man in his best friend’s costume. Just in time to see a staff come flying at his throat when the real Daredevil catches it. We got a teensy tiny glimpse of how cool Bullseye could be in live action with the 2003 movie, but The Devil You Know shows him at his most terrifying.

Director Stephen Surjik reimagines Bullseye like a stalking horror movie villain with pinpoint ricochet talent that even catches Matt off guard. Our first Bullseye/Daredevil encounter more than lives up to the hype and is every bit as physical and brutal as anything we’ve seen in the season so far. 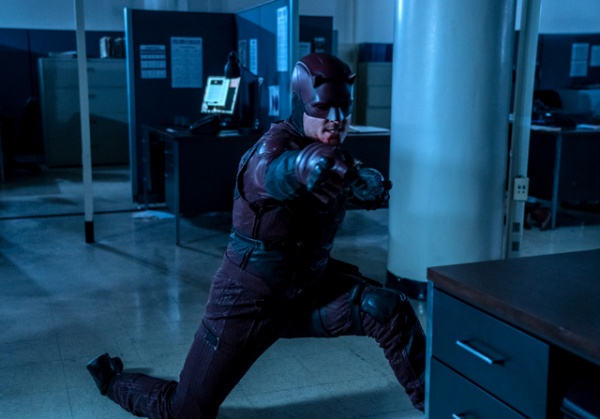 It’s legit surprising that Matt loses and Dex casually walks into the interview room, seemingly kills Ellison with a dagger and blows out Jasper’s brains. He smiles and leaves Karen unharmed. In a very minor gripe, it seemed weird that Karen wouldn’t be more distraught about Ellison’s death. Instead, she runs out to check on Matt, who barely manages to avoid Ray’s men. In hindsight, Ellison thanking Karen for encouraging him to get this story out should have been a dead giveaway he was about to get killed.

Ray has a run-in with Dex Daredevil, who repays the favor of his support through the investigation by sparing him. Not that Ray gets any of that. For him, there’s one clear and very present danger and it’s time to take down Daredevil.

Fisk has systematically worked to destroy both Daredevil and Matt Murdock. All from his ivory tower and now he’s got a master assassin on his payroll to carry out his dirty work. Matt is desperately in need of some positive news, but there’s none anywhere on the horizon.

The Devil You Know marked an amazing first encounter between Daredevil and Bullseye making the two season wait worth it. Add in Fisk’s manipulations and this is Daredevil operating on an extremely high level. It can’t miss right now.