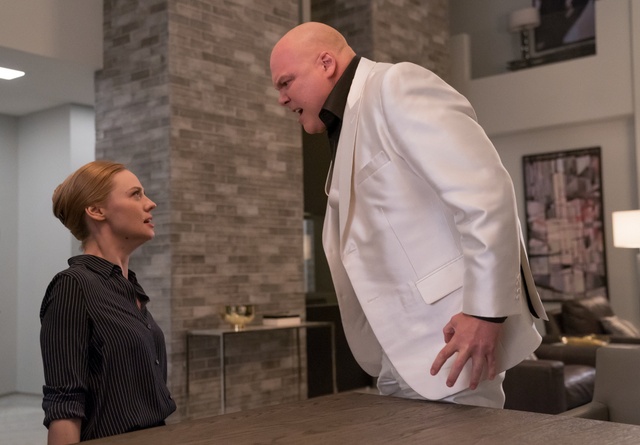 Upstairs/Downstairs finds both Matt and Karen making some seriously questionable moves that are bound to get somebody killed. In other words it’s just another crazy episode of Daredevil.

I’m proud of how the writers are handling Ray. He’s not that bumbling, idiot law enforcement agent who’s another obstacle when he should be an ally. Upstairs/Downstairs puts him squarely on Team Devil as he works with Matt to get Dex out of his house so they can check it. The guise of having a lawyer arrange a case for Dex was pretty smart. Not having his lawyer pal call to tell Ray that Dex left was the exact opposite.

Dex is already stressing as Fisk has someone respond from Julie’s phone asking Dex not to contact her again. This is all a ploy to have Dex unhinged and completely under Fisk’s thumb. Although he can’t find the suit, Matt thinks they’ve got more than enough of a case to take Dex down. It’s odd that Matt, the lawyer, thinks the flimsy evidence would make a convincing case. As he and Ray argue, Dex grabs some slivers from the chandelier as throwing daggers.

Matt’s reflexes really crapped out here as with a bit more head’s up they could have put everything back in place. Naturally, Dex is looking for his intruders and does some trick shot ricochets to shoot Ray. Through a broken mirror, Dex makes out that Ray is with Daredevil. That’s not good for his family at all. Barely managing to get away, Matt snagged one of the tapes.

Dex has reached Cracked-ville and burns the rest of the tapes. That’s not good for anyone as those tapes were the only things helping him stay in line. 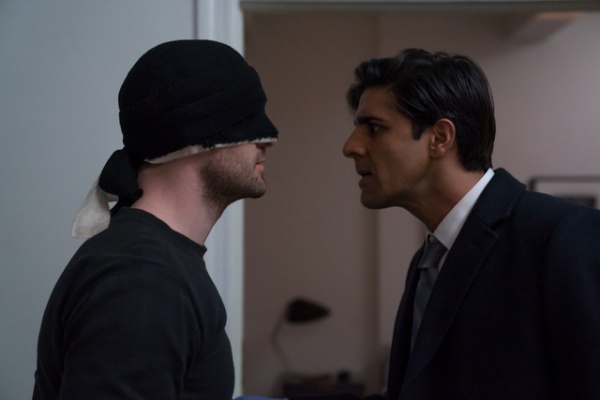 Foggy might be the smartest character on the anti-Fisk side. He realizes Fisk is methodically using the FBI to take out his rivals therefore making it easier for him to regain his status as Hell’s Kitchen’s Kingpin. Foggy tries to get Karen’s help, but she’s still shell shocked after Dex ran wild on the Bulletin staff. I appreciate the real world feel as Karen did in fact lose her job over her refusal to out Daredevil’s identity.

Recognizing that perhaps he’s gone a little too far, Dex reaches back out to Julie. And against all common sense, she agrees to help the stalker nutjob. I will give Julie credit for being appropriately leery. Sadly, Dex wasn’t the one she needed to be worried about as Fisk was watching this bond play out over his voyeur surveillance web.

To keep Dex compliant, Fisk has his men kill Julie! That was cold and cruel in addition to a good reminder why Matt told Betsy to get out of town ASAP. No need to become a loose end to get wrapped in plastic.

Foggy confronts Tower and gets some nice sound bites for the big fundraising crowd. But just when he’s really on a roll, he realizes why Karen isn’t around — she’s gone to confront Fisk. This is such a bad idea. Vincent D’Onofrio’s take on Kingpin is so menacing that he gets your attention from the small things like a twitchy right hand and his glares like he’s thinking how swiftly he could snap Karen’s neck. He’s all menace.

Fisk and Karen trade thinly veiled threats back and forth before he catches her off guard by mentioning Matt’s secret life. She counters asking about Wesley and says she killed him. Oh Karen, Fisk is cray cray and not the cool kind like Trish.

This was a great scene and I loved how Karen never backed down and was fully willing to get hurt if it meant triggering Fisk into something to get him sent back to non-luxury prison.

Fisk’s fixer summons Dex to Fisk’s hideout where he shares that Ray is onto him. That’s good villain communication. Fisk assures Dex that won’t be a problem. For now, it’s time for Dex’s rage to go somewhere. This is like winding up a torpedo in a lake. Dex is going to go off on everybody!

After another verbal sparring session, Sister Maggie is frustrated so she goes to pray. And this time she starts griping that her son is too much like you, Jack. Of all the ways to find out Maggie is his mother, this probably wasn’t the way Matt envisioned.

Upstairs/Downstairs doesn’t let up the momentum by solidifying the Daredevil/Ray alliance and shows Karen on the offensive.