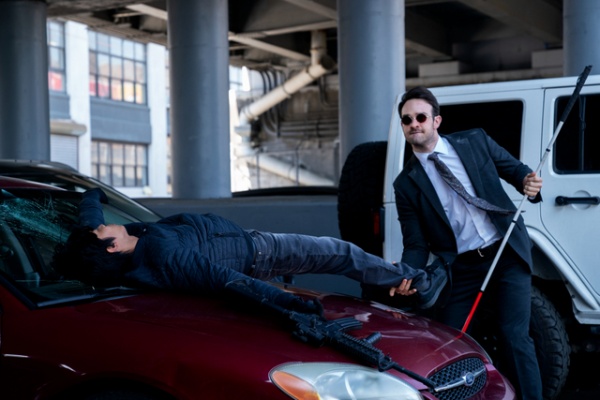 Daredevil’s third season found a lot of clarity with its penultimate episode. One Last Shot was an amazing episode that put the final pieces in motion for Daredevil’s big showdown with Wilson Fisk.

Vanessa has returned. So much of Fisk’s actions this season have been for this triumphant moment, but she’s a little cold and distant. Vincent D’Onofrio makes Kingpin so menacing that it’s nice to see this softer, more vulnerable side to Fisk. Sure, he may pummel a minion in his the backseat, but with Vanessa all he’s concerned about is breaking a few eggs for a nice omelette.

In the wake of his failure, Dex is struggling to decompress. There’s no more tapes and his only compass is too busy with his girlfriend to provide that needed guiding light. But Dex won’t sit back on his failure hoping for the best. He surprises Vanessa (and Wilson) by securing Rabbit in a Snowstorm. While Fisk has some moral code that won’t allow him to steal from a holocaust survivor, Dex has no problems. If it makes Kingpin happy, it’s done.

Vanessa can just consider Dex the new John Wesley. That’s an interesting statement on many levels. Fisk considered Wesley his most competent associate, who in many ways was his only friend. Dex desperately wants to be not just Fisk’s main hit man, but more importantly his friend. Clear I put too great a burden on your shoulders. And Vanessa seems to quickly understands Dex is a loaded gun just waiting for Fisk to aim him.

Matt is showing a rare side of humility. He’s fine going along with Foggy’s plan and is offering no blow back. Maybe, just maybe the legal system will work out and Fisk can be brought to justice? But first, they’ve got to keep Agent Ray Nadeem alive. Poor Ray. The guy was only trying to do the right thing and managed to completely lose his wife’s trust. Maybe even more than knowing Matt’s alter ego, losing his marriage seems to guarantee ‘ol Ray won’t be around much longer.

With Ray safe at Mahoney’s house, it’s time to get some representation from Nelson and Murdock Attorneys at Law. It’s rare when a Marvel Netflix show allows for a legitimate feel good moment. Matt and Foggy haven’t suited up together since Season 1 so this reunion felt very well-earned.

Foggy is hustling to make this work and seems reinvigorated partnering with Matt again. You know this won’t work, but Matt isn’t being the cynical best friend. He’s letting Foggy’s plan fully go to fruition.

Fisk’s fixer, Felix, has read the tea leaves and figures Ray is testifying. The call goes out — make sure Kingpin is not indicted. This leads to a rare daytime fight where Matt leads Ray through a gauntlet of Fisk’s assassins. It was a thrilling sequence and a welcome change of settings from the standard darkened alleys and buildings. 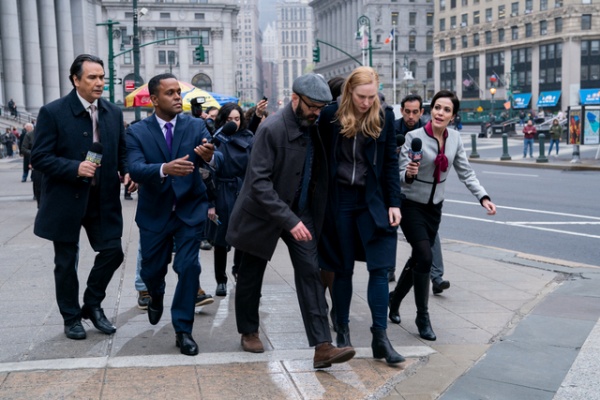 With Ray safely escorted and ready to testify, Karen has Ellison organize a press conference so she can hit Fisk from the media side as well. But we all knew this wasn’t going to work. Kingpin’s already gotten his paws onto the jurors. There will be no indictment today.

Ray understands his family will never be safe…not as long as he’s alive. He ditches Foggy and goes home making sure he’s visible on the security camera as if inviting Fisk to come get him.

Vanessa explains why she’s been so distant — she doesn’t want to admire Wilson’s world, she wants to live inside it. This leads to a great sequence where Ray is recording a message for his family and tells his son the meaning of his name is elevate. Just as Ray says he wants his son to elevate his mother, we cut to Fisk leading Vanessa down to his lair. That’s pretty strong symbolism and a terrific bit of editing.

Felix seems pleased to not have to speak in code around Vanessa anymore, but the bigger shocker is Vanessa is all in with Fisk’s world. It’s Vanessa who strongly suggests that Wilson kill Ray so he can’t be turned against him. And have Dex do it. D’Onofrio does an excellent job here in keeping Fisk’s expression stoic. Is Fisk happy about this new turn of events? Does he need to worry about Dex earning a favored status with Vanessa? Or is he simply concerned that he’s corrupted the love of his life.

Dex does arrive at Ray’s place and Ray knows what’s about to happen. But he gives one last shot at trying to appeal to Dex to partner up so they can take Fisk down together. It’s pointless of course and Ray forces Dex’s hand by reaching for his gun and getting killed. Ray lands in the dug up ground he had set up for the family pool. We’ve seen countless bit characters killed in the Marvel Netflix world, but Ray ranks right at the top as one whose death had meaning.

Matt seems to think so too as Foggy gets the word and he storms out. He tried it Foggy’s way and now it’s Matt’s way.

One Last Shot set up an immediate next episode button press. It hits all the right notes to ensure this season’s final episode is going to be eventful and memorable. This season hasn’t had a let down episode and with the way it’s built up, it’d be highly unlikely for the ball to be dropped in the finale.