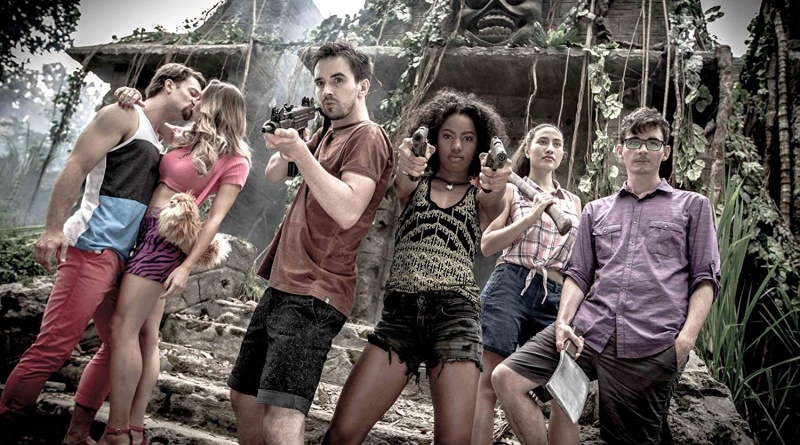 Dead Squad: Temple of the Undead had potential to be a fun, 80s style horror film, but it’s undone by humor that’s cheesy unsteady of campy. The film probably would have worked as a lower budget 80s monster horror film, but the questionable decision to play it for laughs with comedy was a bad choice.

Dead Squad: Temple of the Undead might have been passable entertainment, but the zombie romance, attempted rape and multiple zombie oral sex sequences are among the worst scenes I’ve ever seen.

Two sets of friends visit an island resort only to stumble onto a set of ruins filled with zombies created from a Nazi experiment. After taking in the scenery and pairing off, it’s time to figure a way back to the resort before sunset. As in most of these films, the six potential victims have to willingly put themselves in harm’s way to find trouble. At least there’s some forces working to steer them along the path of trouble.

In true old school horror fashion, two characters (Carma Sharon, Bianca Zouppas) only seem to be around until their topless scene. Zouppas at least seems to have some fun playing her exaggerated dumb blonde character Tiffany. Although there’s never any explanation as to why Tiffany’s carrying around a dog stuffed animal as if it was a real pet. 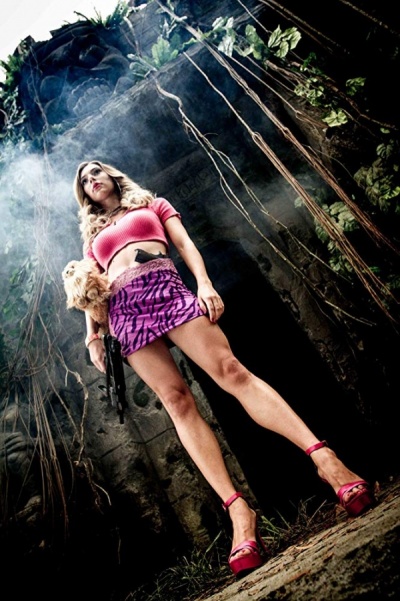 Most of the male performances are bad with Jonathan Looper in particular struggling to bring out any kind of natural emotion. He plays the brainy, likable member of the bro trio, but he lacks any presence. Still, Looper is at least nowhere near the level of the obnoxious performance from Guy Talon. He plays Ethan, the super bro, with no trace of subtlety. Ethan is the character viewers will be rooting to get killed quickly.

The film’s biggest saving grace is the one black character (Alina Carson) isn’t the first victim and is the one capable character. It’s rare when the black character gets to be competent in these movies let alone be a bad a$$. Carson is a lot of fun as well and after the initial shaky setup with the awkward introduction of the groups, she stands out.

Elizabeth Morse is decent as the virtuous Jennifer and I appreciated the diverse cast.

In another plus, the character design for the main monster is surprisingly good. He somewhat reminded me of the Resident Evil villain Nemesis. Considering the far too frequent goofy moments the design team probably worked too long to make the monsters look credible since the script makes them bumbling idiots.

Maybe what’s most disappointing is the film actually has potential. The action sequences are well staged with some creative deaths. For some reason the effects team is never able to make convincing looking blood. It looks like watery sludge and doesn’t remotely look like blood.

And ultimately all of the weird zombie sex and stupid humor ruin what could have been a welcome addition to the zombie genre.