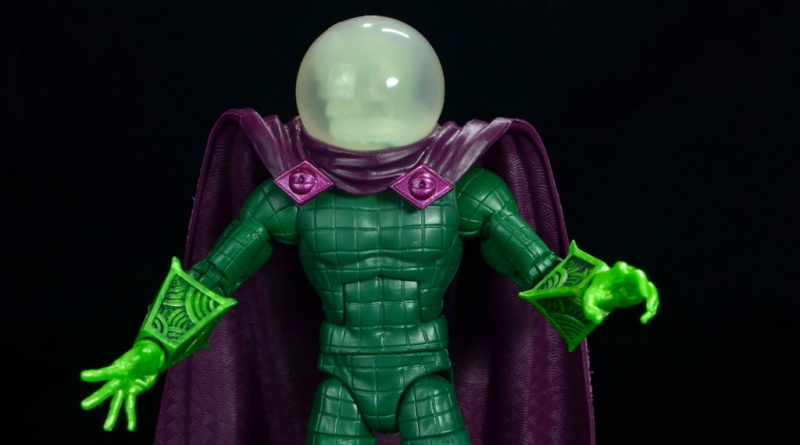 In between cranking out a million Deadpool variants, Hasbro has been hard at work knocking out some Toy Biz Marvel Legends figures badly in need of updates. With most of Spider-Man’s main villains updated, it was time to get another classic one off the list — Mysterio. I’ve always thought he had a great look, but ironically it wasn’t until his appearance in Daredevil that I really viewed Mysterio as a great villain.

Fortunately with Hasbro there’s so need for smoke and mirrors as this Mysterio update is the real deal.

Packaging:  There’s no need to go into a long drawn write-up here. You know what you’re getting from Hasbro at this point.  I love figures like Mysterio that have so much stuff crammed into the package. This is the rare case where the colors of the BAF match the figure so closely I had to look closer to make sure everything was included. 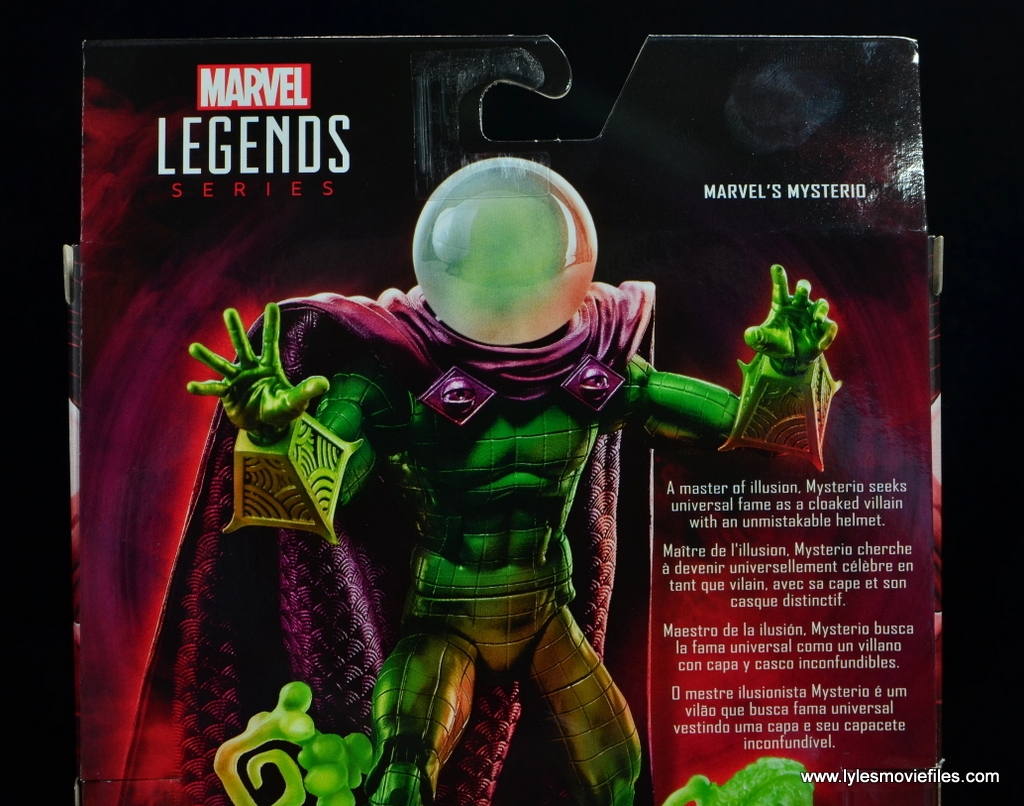 The side drawing was fun with the reflection of his hand on the dome and a faded bottom portion channeling Mysterio’s illusions in action. As far as the bio goes, it was fairly comprehensive on the basic aspect of the character. More could definitely be done on that front however.

Likeness:  Mysterio was not going to be a simple repaint figure for Hasbro. He required all-new tooling and  Hasbro delivered. The Toy Biz figure was pretty close to being perfect, but suffered from an enlarged head and small frame. 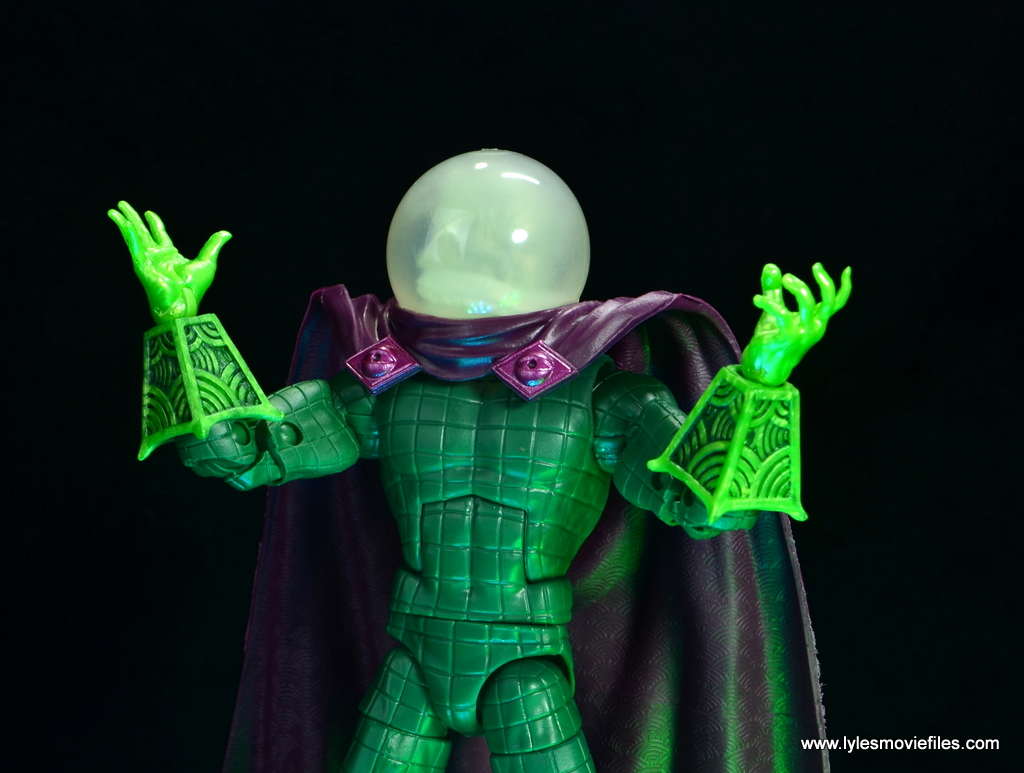 Hasbro’s take captures Mysterio’s elevated cape better with raised shoulders and eye-like cape clasps. The gauntlets have an intricate sculpted design and the boots have a terrific design as well. Mysterio’s signature quilt like outfit is faithfully captured and it looks great.

The Hasbro version is much thicker and solidly put together than the Toy Biz figure, which suffered from long arms and awkward proportions. 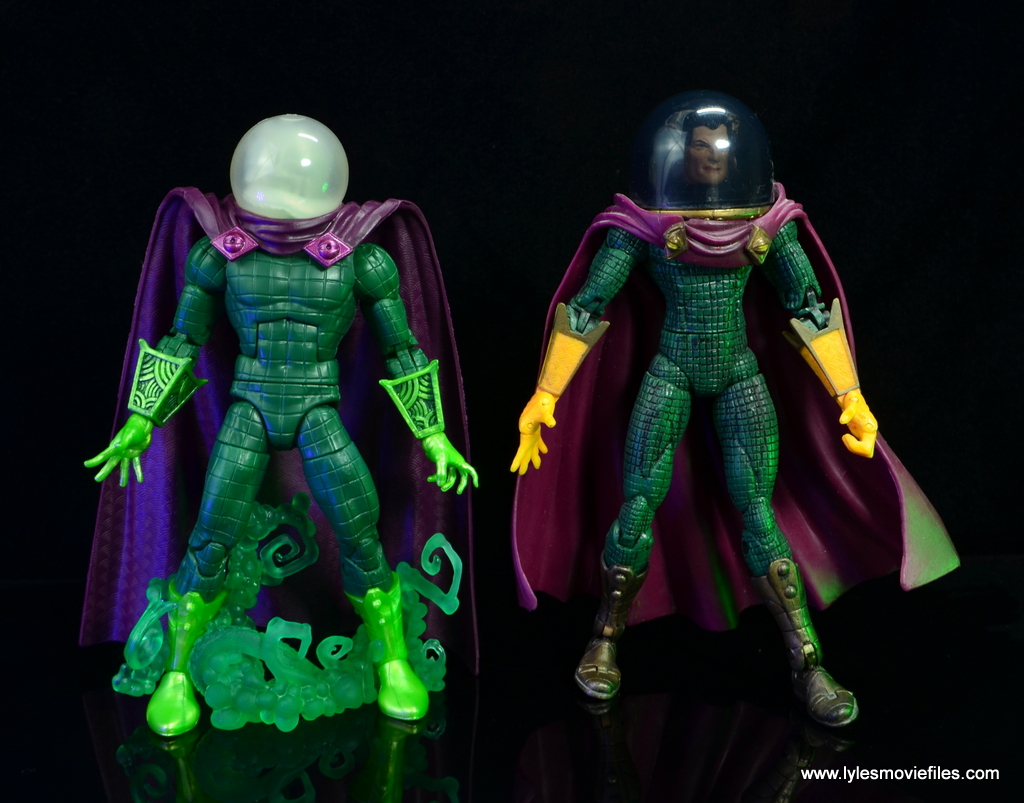 This attention to detail carries on to the intricate cape pattern as well. I can’t think of who else Hasbro could use with this sculpt so it’s appreciated they made essentially a one-off sculpt for one of Spider-Man’s main rogues. 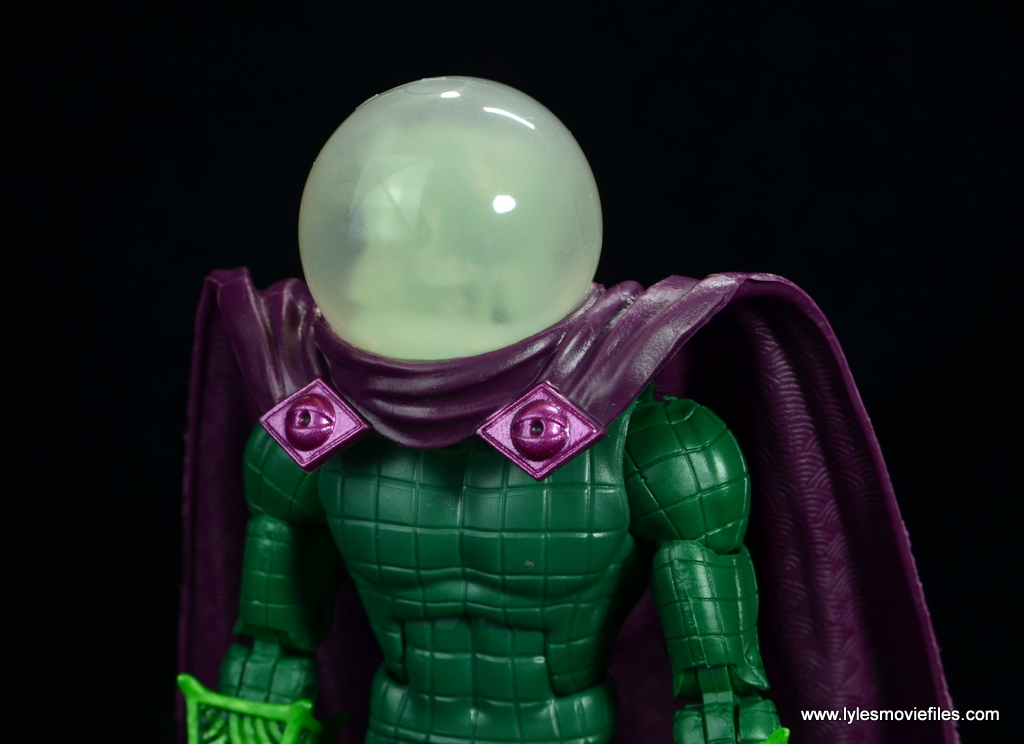 Hasbro has slowly started to trickle out variants/running changes to figures. Fortunately, I got the globe head with the white head underneath. I don’t know why Hasbro went with a green head underneath in the first place, but I’m glad I don’t have to worry about it. I still think I’d prefer a smoky non transparent globe though. The globe is removable so you can see the nightmarish sculpt underneath. 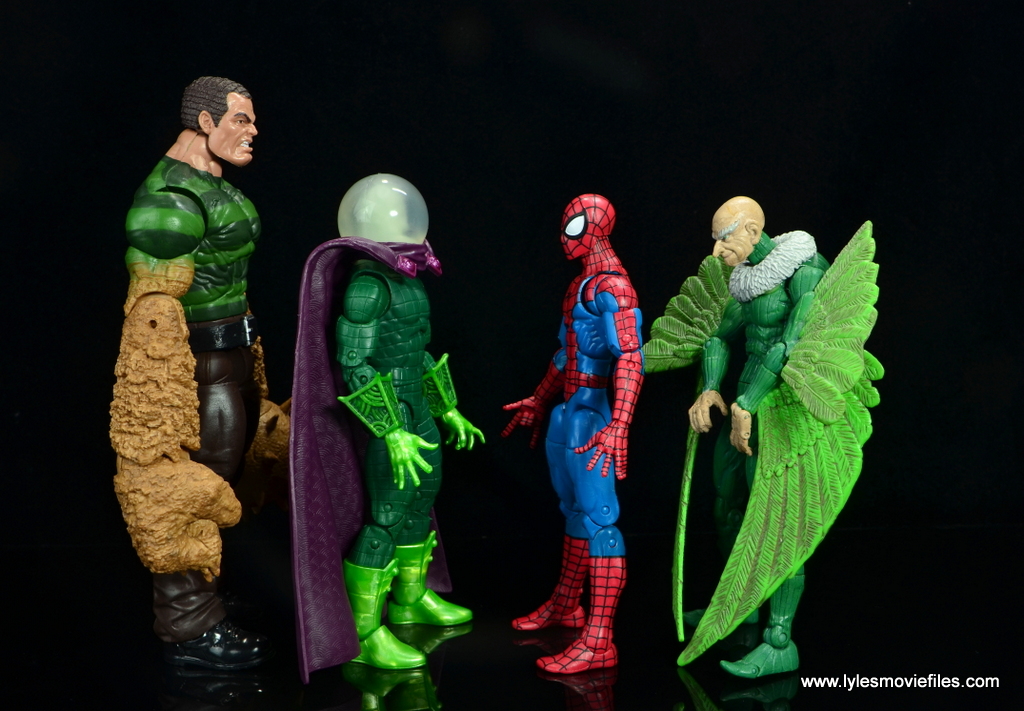 Scale:  Despite the globe dome, Mysterio stands about the same size as a standard Marvel Legends figure and is just a bit taller than Spider-Man. 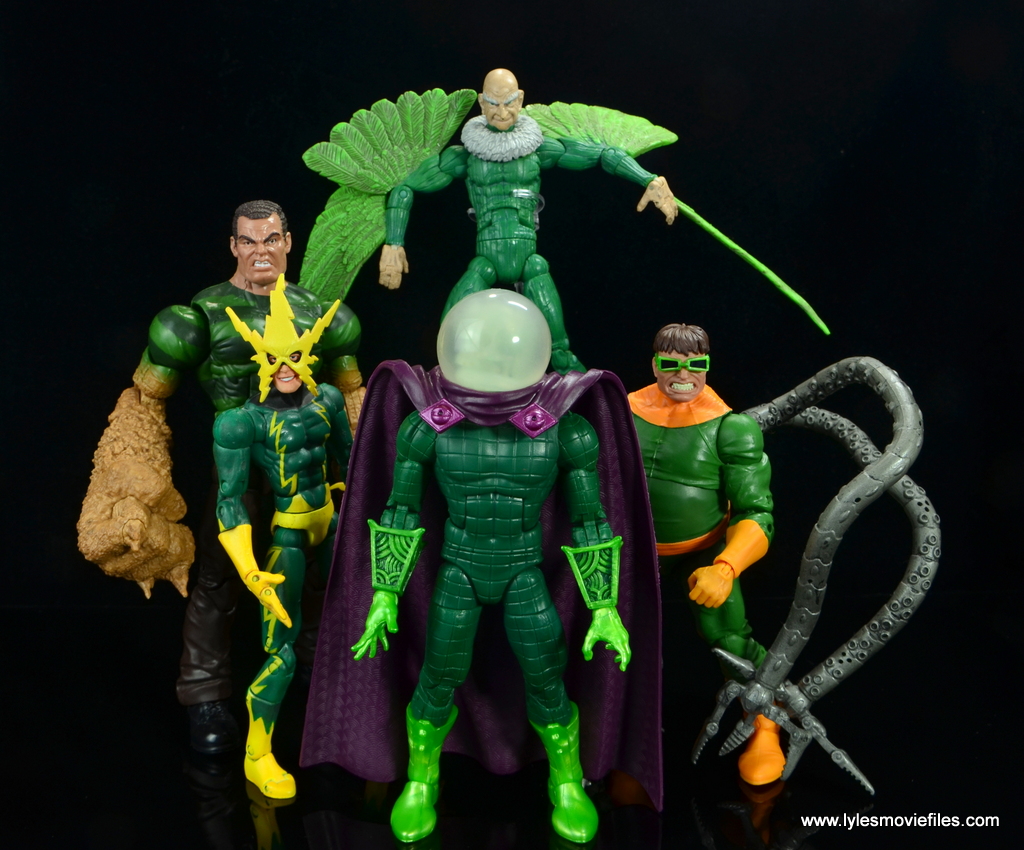 Paint:  My classic sensibilities have me wishing Hasbro went with gold/yellow gauntlets and boots, but I can’t find any other flaw with an otherwise sensational paint job. The color choice is really more of a matter of breaking up all of the green.

The yellow green Hasbro used is distinct, but not as obnoxious as the old school look. Mysterio is another character whose initial design was so perfect it couldn’t be improved upon. 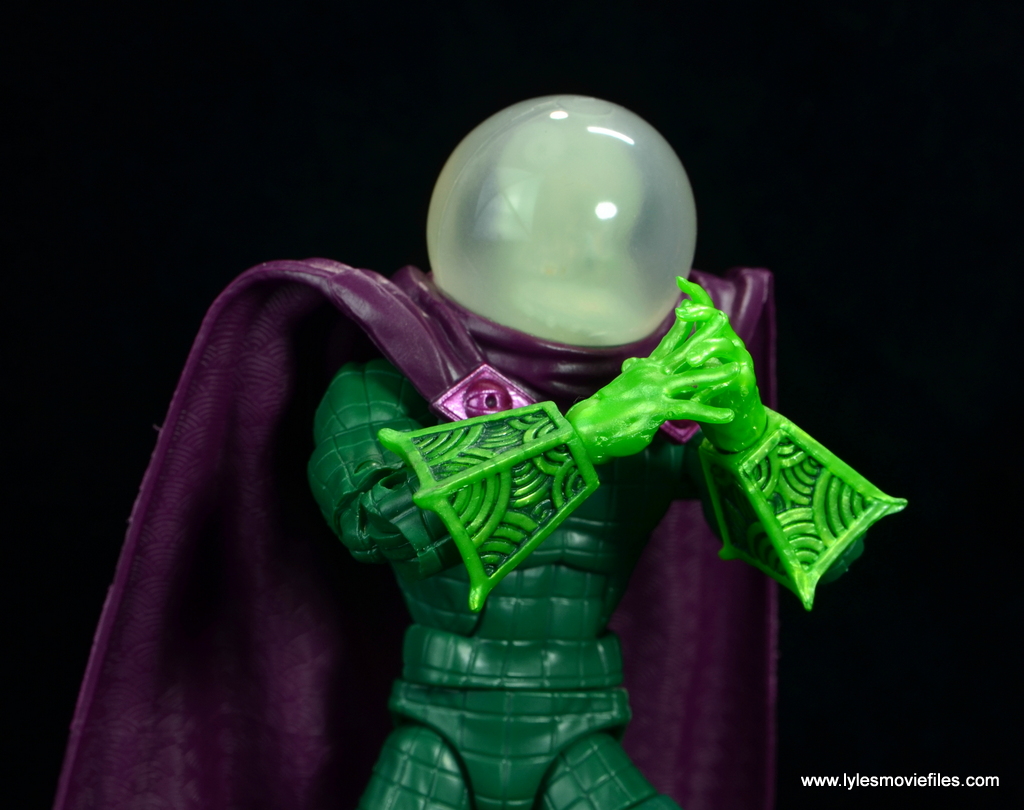 Articulation:  Mysterio is not a physical villain. To capture his signature poses, it’s just a matter of being able to raise the arms above the head and gesture ahead. Of course with the Marvel Legends’ articulation set-up he can do so much more allowing for a lot more creativity in posing him.

The only downside is Hasbro used a weaker plastic so his knees don’t provide the best support initially. I was able to get them in a sturdier position, but it impacted some more dynamic poses. 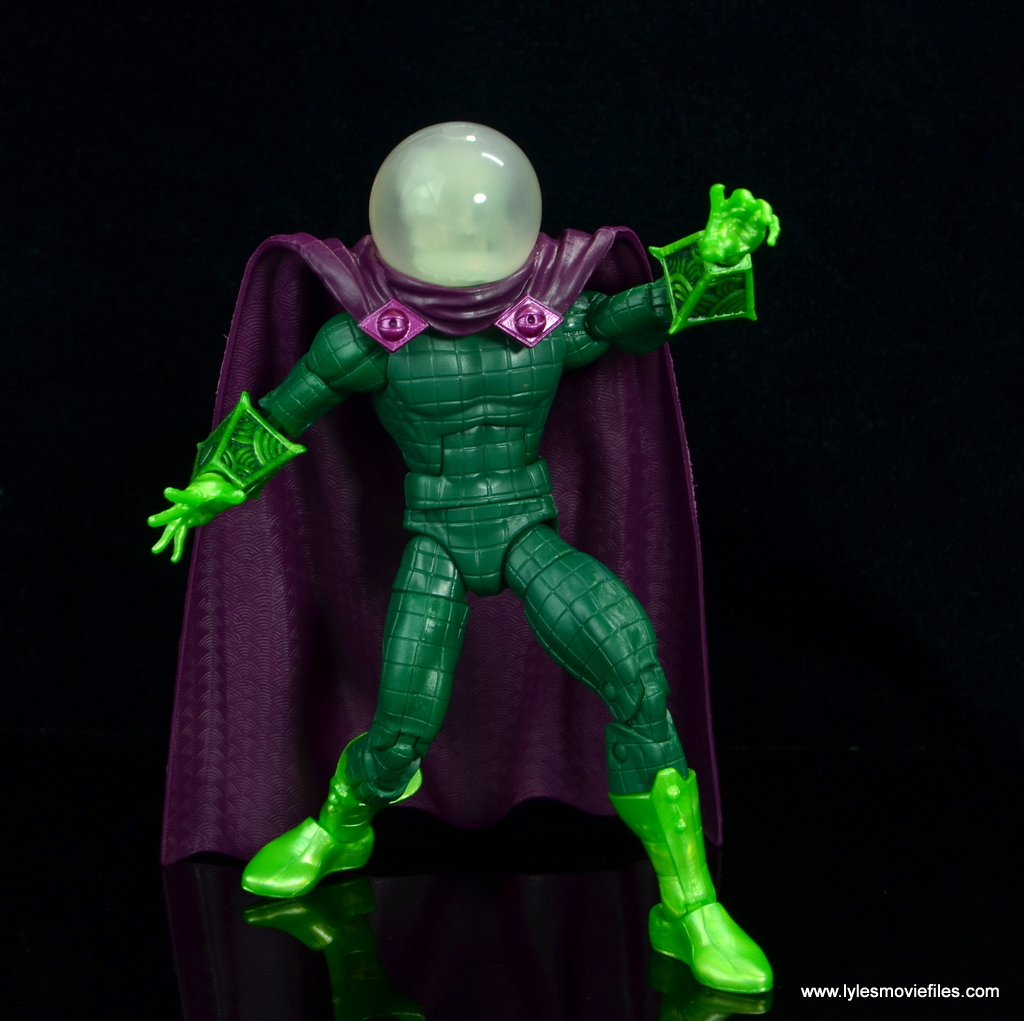 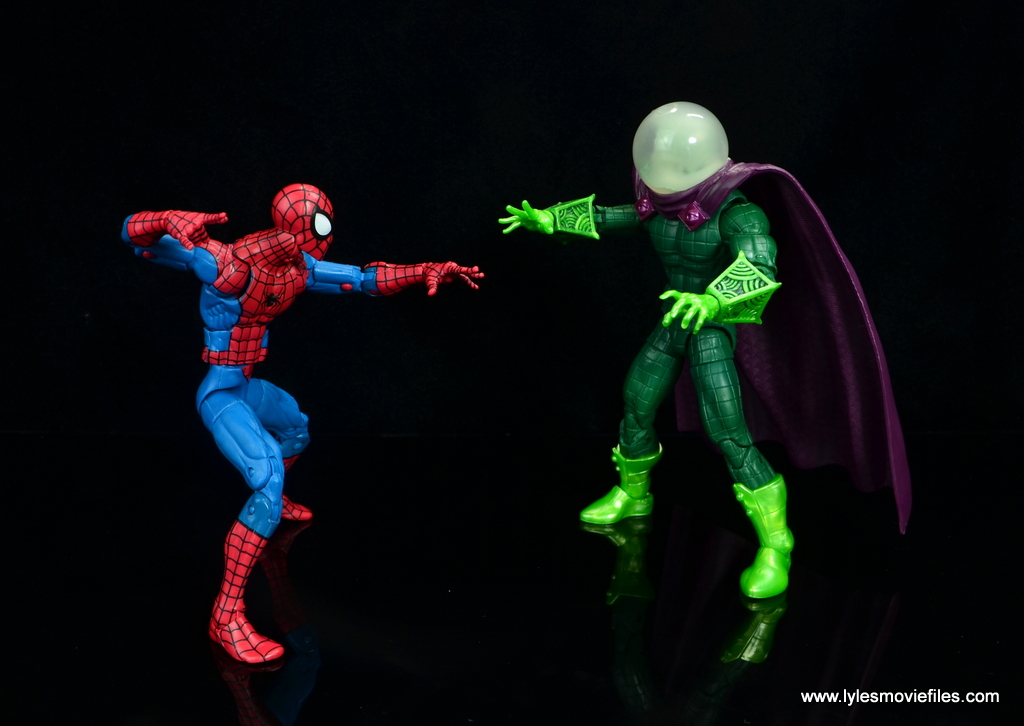 Accessories:  Mysterio has some two smoke effect pieces to simulate his dramatic entrance. They’re made of a translucent material so they’ll catch the light really well. That’s a nice character specific touch. I imagine Hasbro would do the same for the eventual Nightcrawler update. 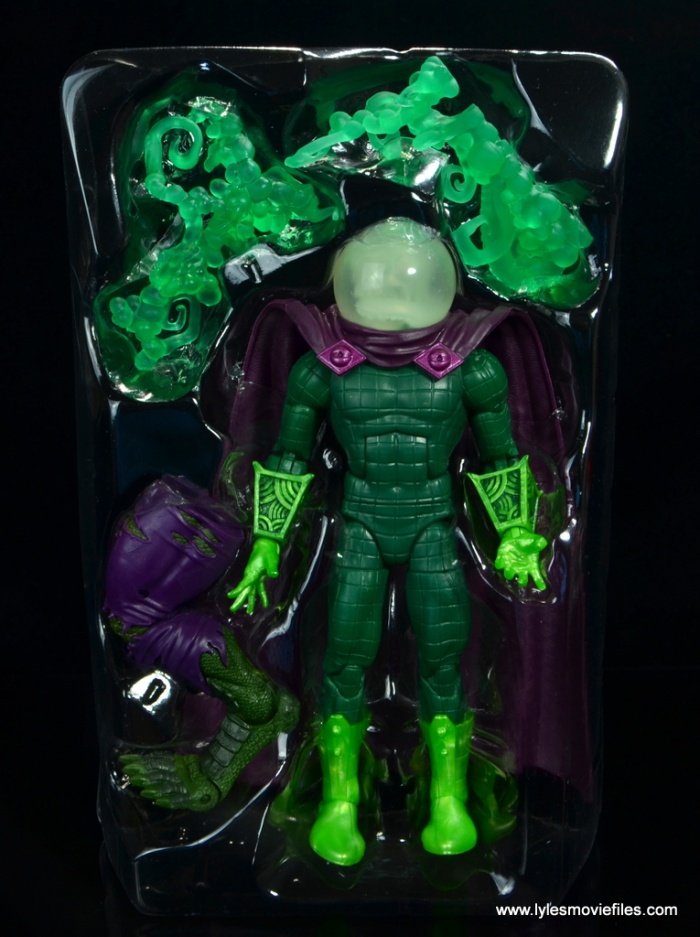 Mysterio also comes with the left leg of the Build a Figure Lizard. I’m really on the fence about building him, but since I’m on the hook for four figures in this wave, it’s probably a done deal. 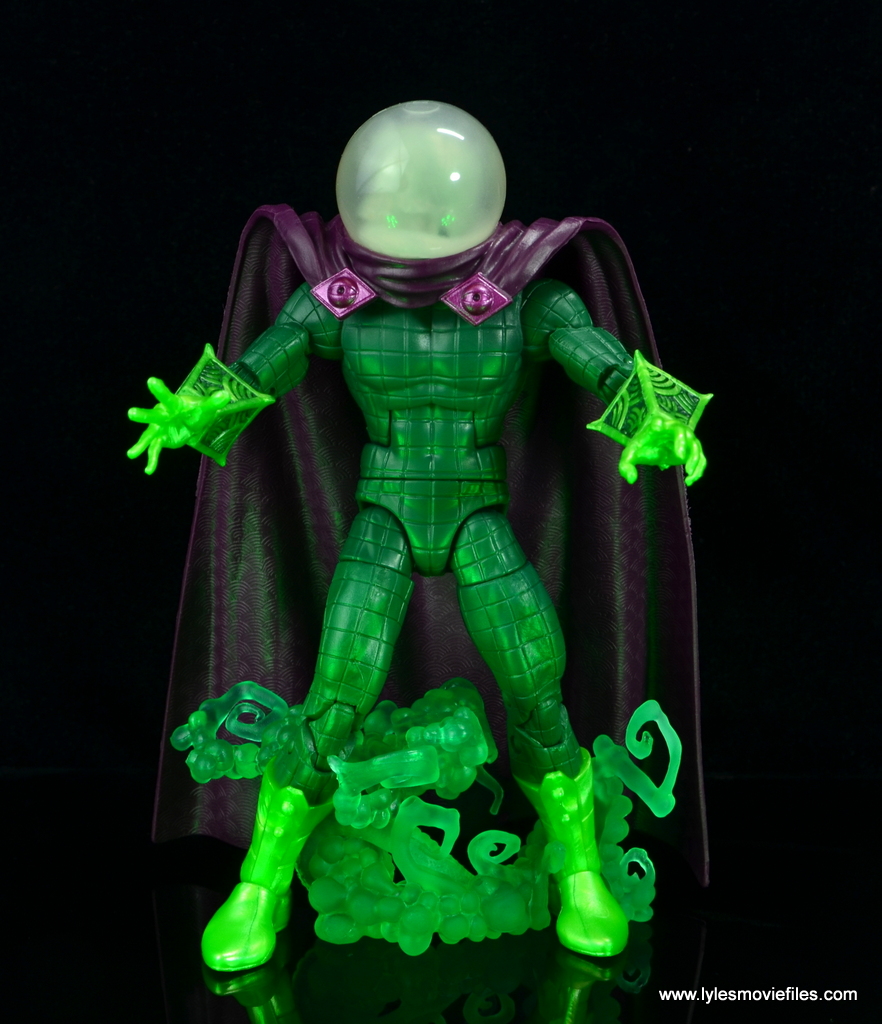 Worth it?  It took a ton of patience, but I eventually got Mysterio for $20. He’s easily proven to be one of the harder figures to track down for retail price. With the BAF Lizard wave slowly losing peg space for newer waves, paying the slightly above retail price might be the smart move.

The weak knees are a pain and while I like the white head sculpt piece, I’d rather the globe not be transparent. The amount of sculpting here is impressive making this a tremendous update and another big winner from Hasbro. 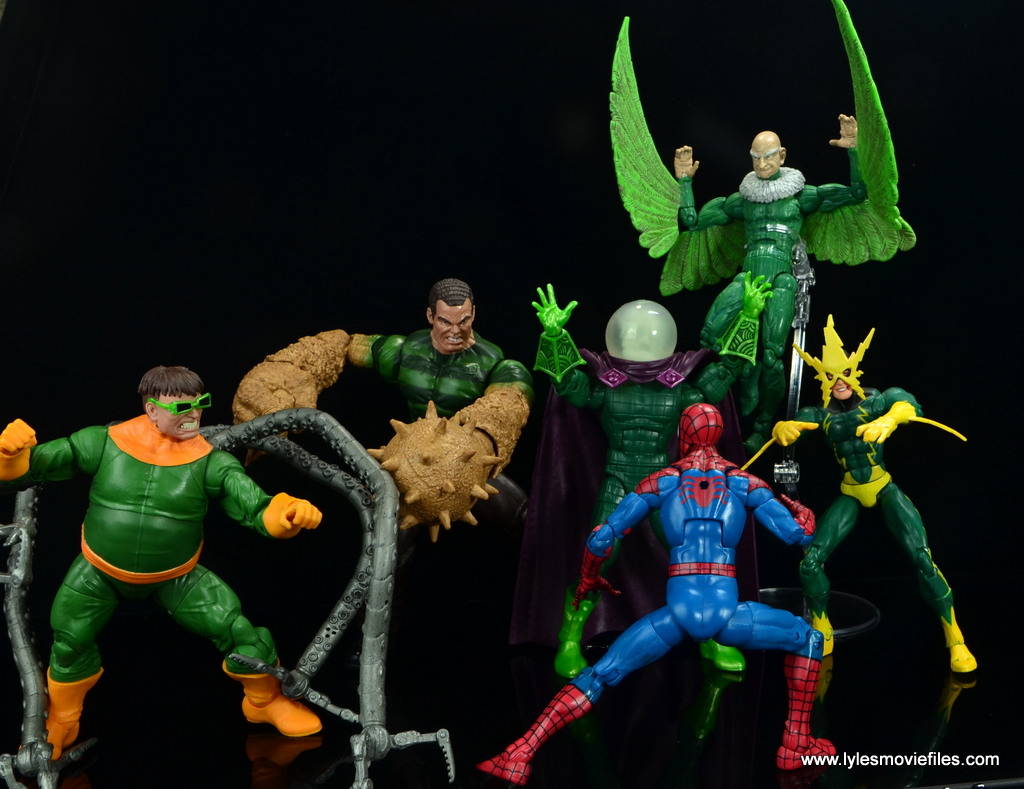 Where to get it?  I got Mysterio thanks to some stalking on Amazon.com. I’ve also seen him one time at Target so consider your options carefully. Otherwise you can grab the full case at Entertainment Earth.com, which is probably a better deal at this point.