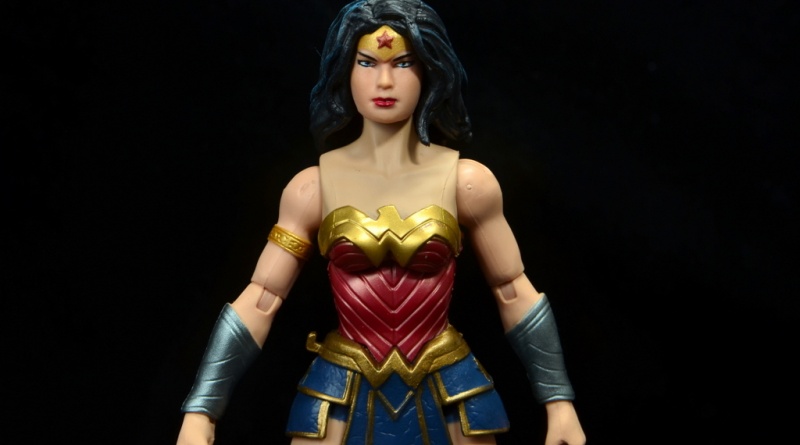 It’s only felt like it’s been a year since we’ve gotten new DC Multiverse figures. Given the retail challenges of the line, I jumped at the chance to get the Rebirth era Multiverse Wonder Woman figure. She’s the first official figure I have from the Collect and Connect Super Lex wave. Let’s see if she was worth the extended wait.

Packaging:  I’m still a fan of the blue package scheme, the big portraits on the side and the unnecessary, but cool ridged base. It’s always problematic to use a Jim Lee drawing for figures not completely based on his style.  The bios remain short, but they effectively sum up Wonder Woman’s agenda at this point. 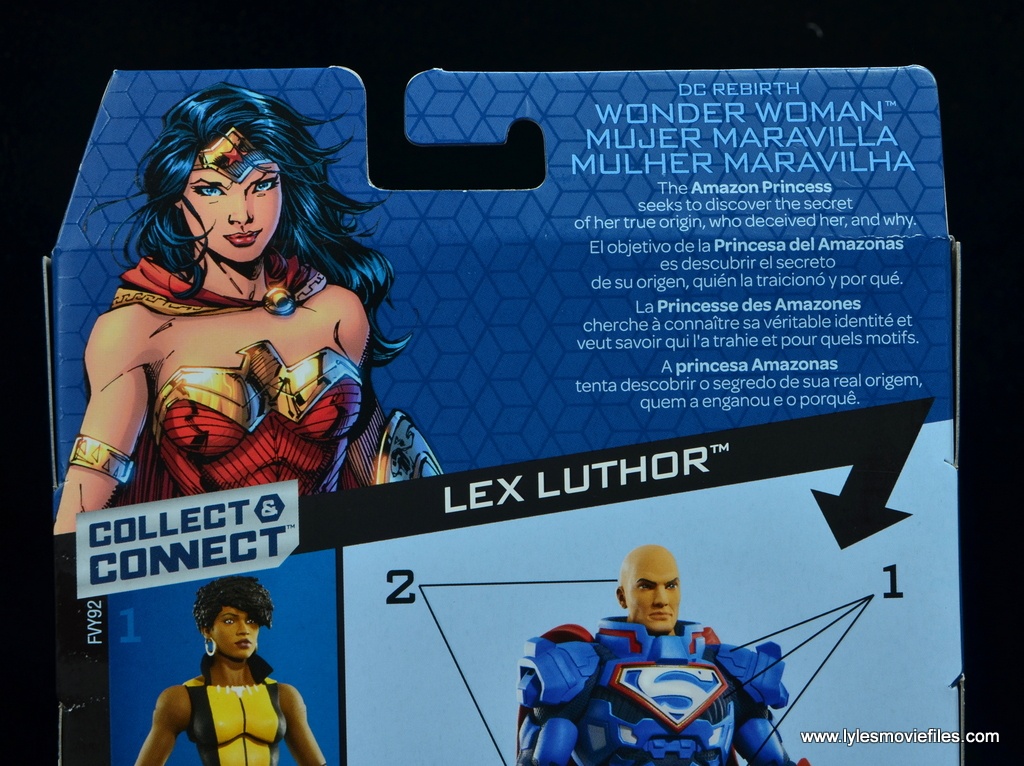 Unlike Spoiler and Harley Quinn, this package back does not include the shelved Simon Baz. 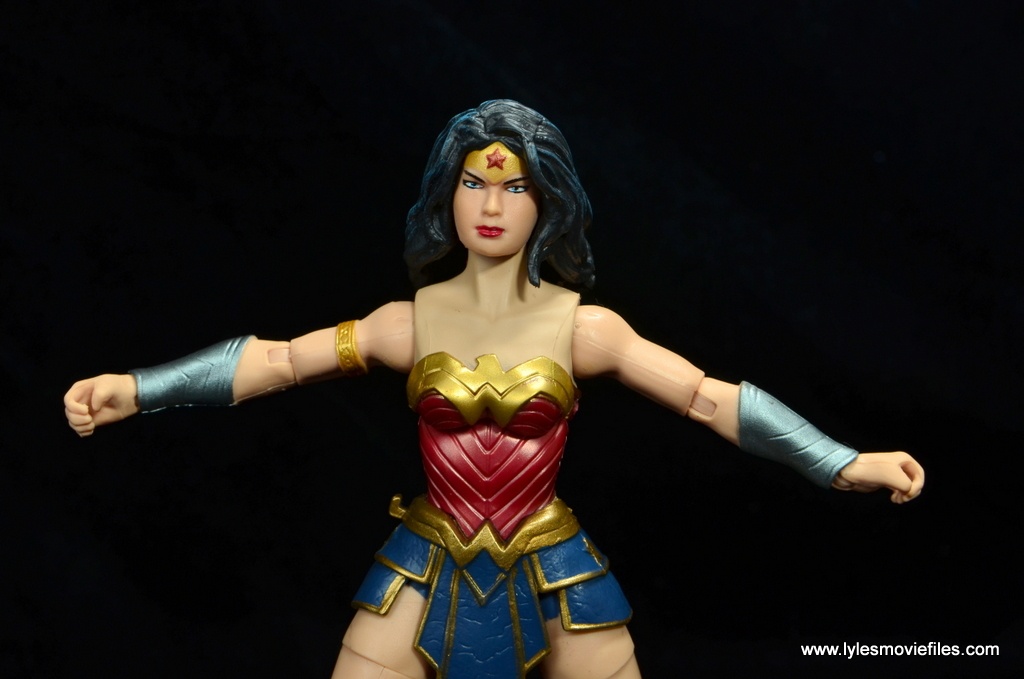 Likeness:  It’s not hard to see the improvements here even though Mattel still has some work to do in other areas. Let’s start with the positives. 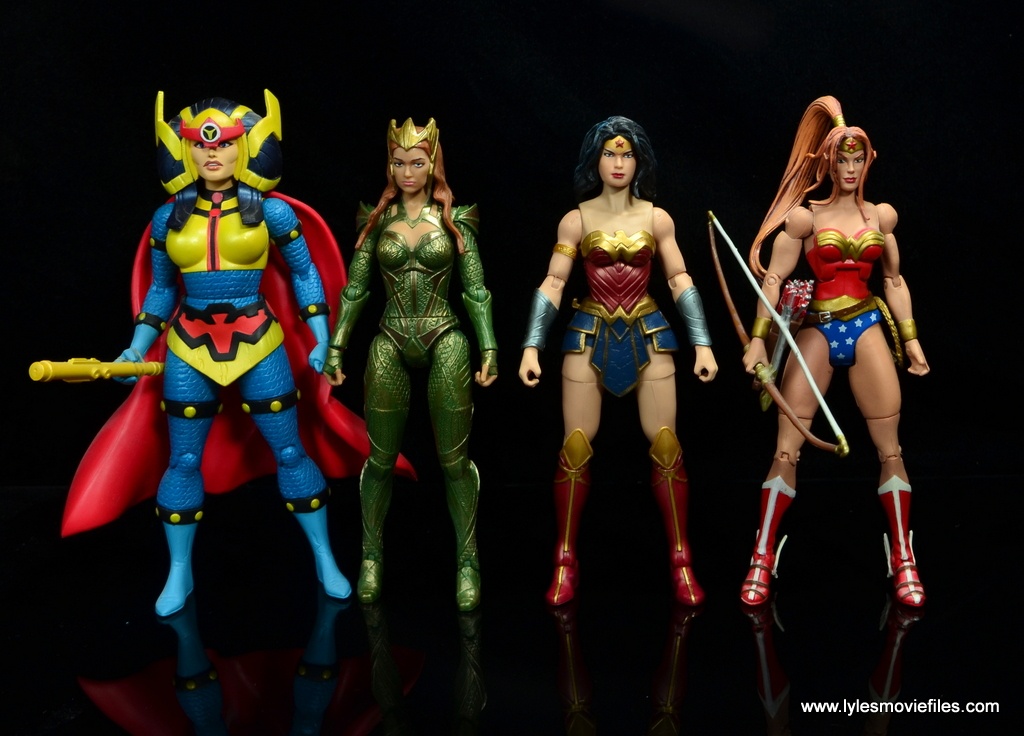 Frame wise, Wonder Woman looks good. The arms are thicker and flow more naturally than the ball-joint twigs we saw with the DC Classics figures. I really love the detailing on the armor. Mattel didn’t leave any sculpting work to be done by the paint job.

The arm bracelet has detailed sculpting with Greek-like runes. This detail carries through to the chest plate, torso armor, skirt, gauntlets, kneepads and boots. I was probably most impressed with the skirt, which has creases and indents like it’s made of leather. This is an outstanding level of detail and really makes the Multiverse Wonder Woman an impressive figure. Now for the areas that needed a little work. 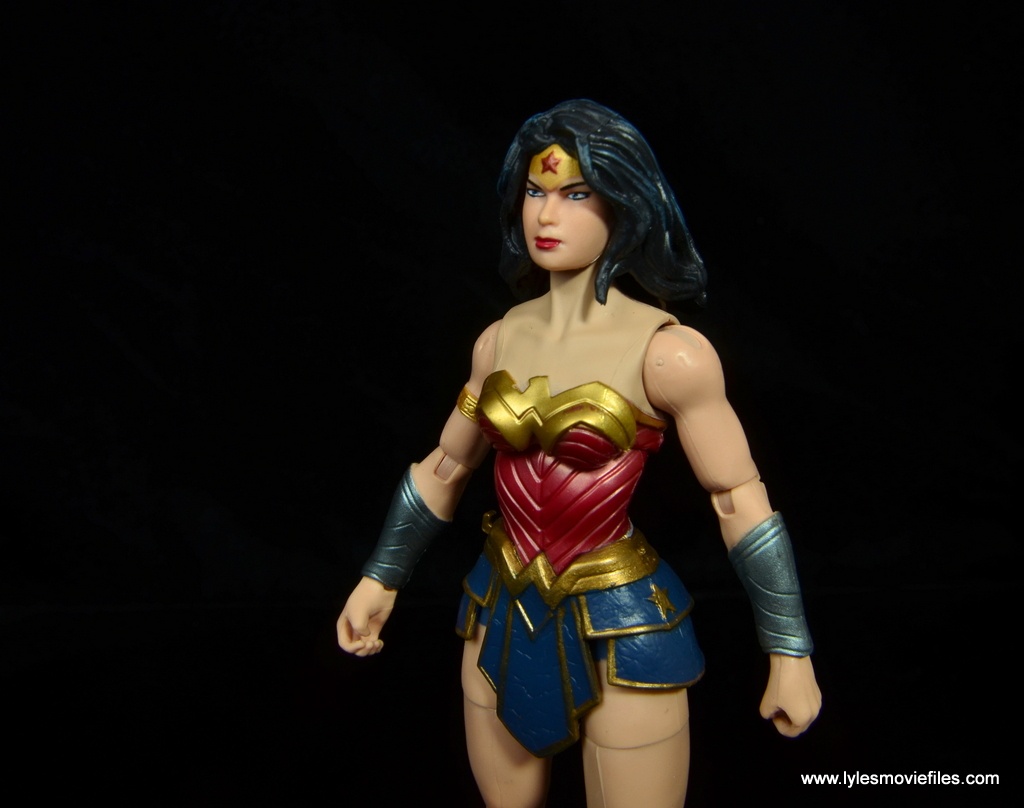 I’m not quite sure what’s throwing me off with the head sculpt. Maybe the eyes seem a bit too narrow and the lips need to be a little fuller. Mattel’s sculptors did the best they could with the hair to allow for articulation and functionality.

While the arms are fixed, Wonder Woman has a tiny waist. Too often sculptors think a wasp waist is necessary for Wonder Woman, who can be portrayed more accurately with a little meat on her bones. That’s very obvious in this case since the thighs and legs are sculpted with a more Amazon appropriate size. 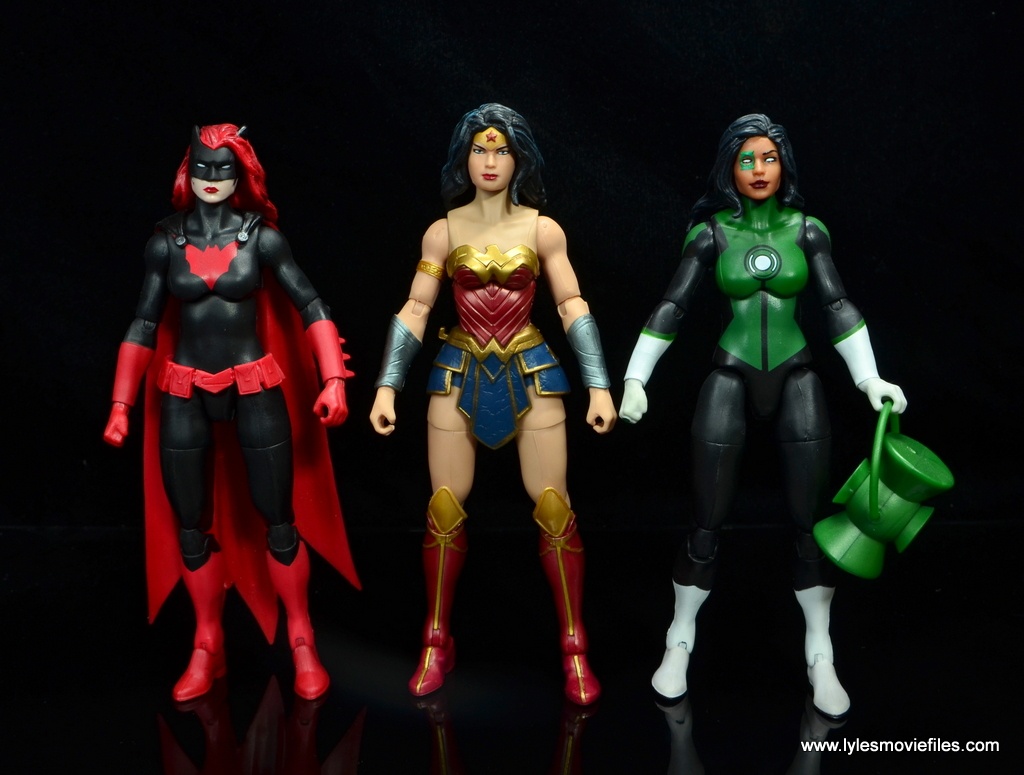 Scale:  As an Amazon, Wonder Woman shouldn’t be looking up at too many characters. Thankfully that scale is correct. It’s nice to see Mattel working in height scales in this new line instead of having everyone the same height.

Paint:  You’ve likely noticed the paint discrepancy with the limbs and the torso. While it’s noticeable in hand, the photos are making it look far more pronounced than you’ll notice in person.

The paintwork isn’t perfect, but perfectly acceptable for this scale. Considering the intricacies of this outfit, I’m more forgiving of the subtle paint slops.  The gauntlets actually have a metallic paintjob that came out great. 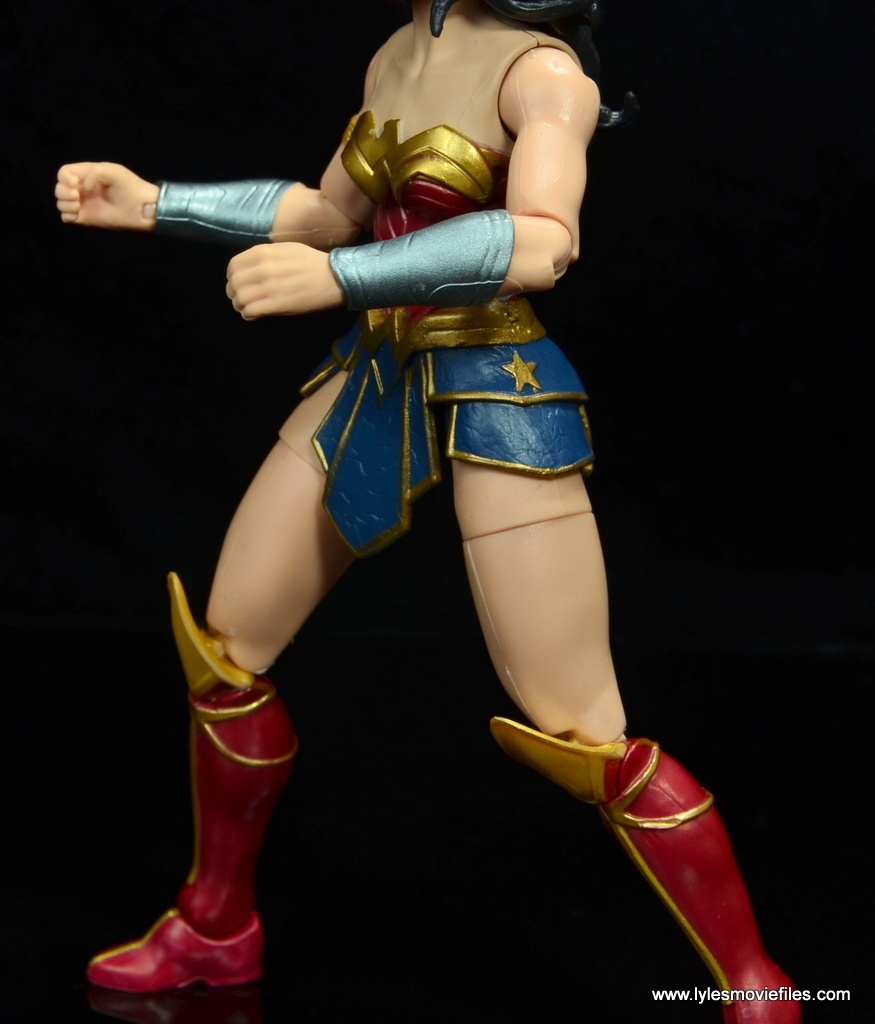 I love the flat gold paint for the armor and the red and blues match up nicely to the source material. The linework on the gold tends to get a little tricky at points. It’s so fine that I can understand the mistakes, but it’s certainly not so bad that I regret not picking one up at retail. 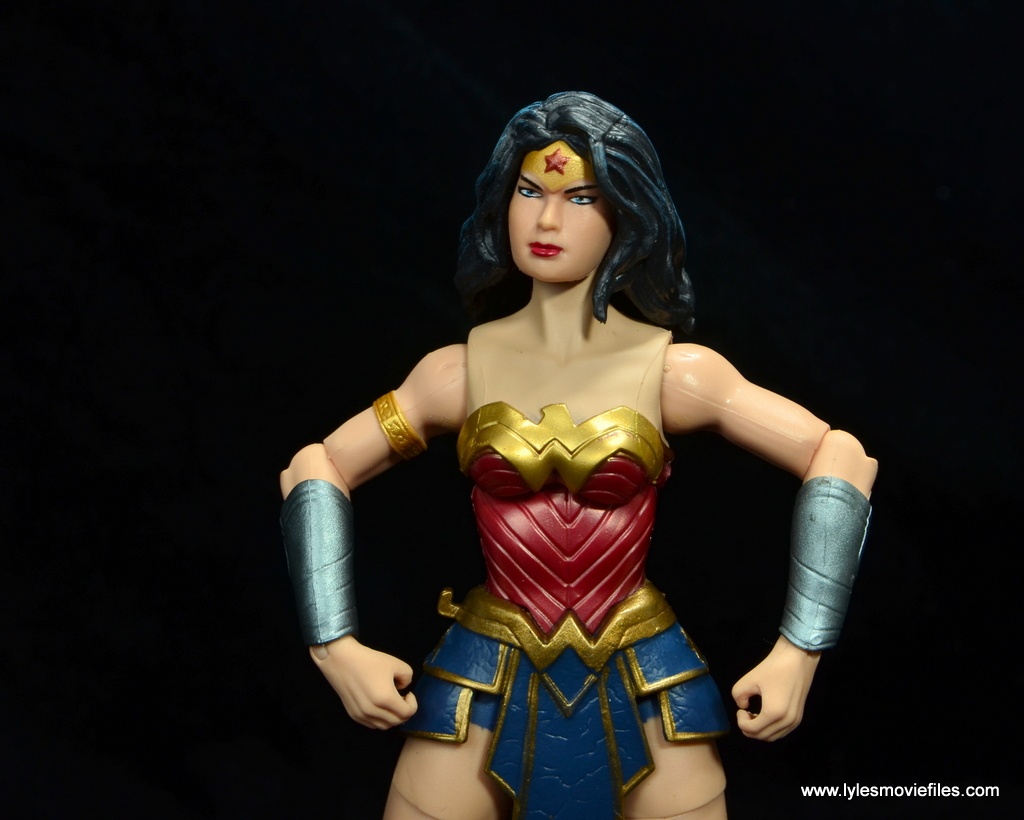 Beyond that, Wonder Woman sports all of the enhanced articulation we’ve seen from the Multiverse line since the Rebirth kick-off. It’s getting there, but not quite at the Marvel Legends level yet. The elbows need a fraction more range to pull off things like the bullet stopping/energy reflection. 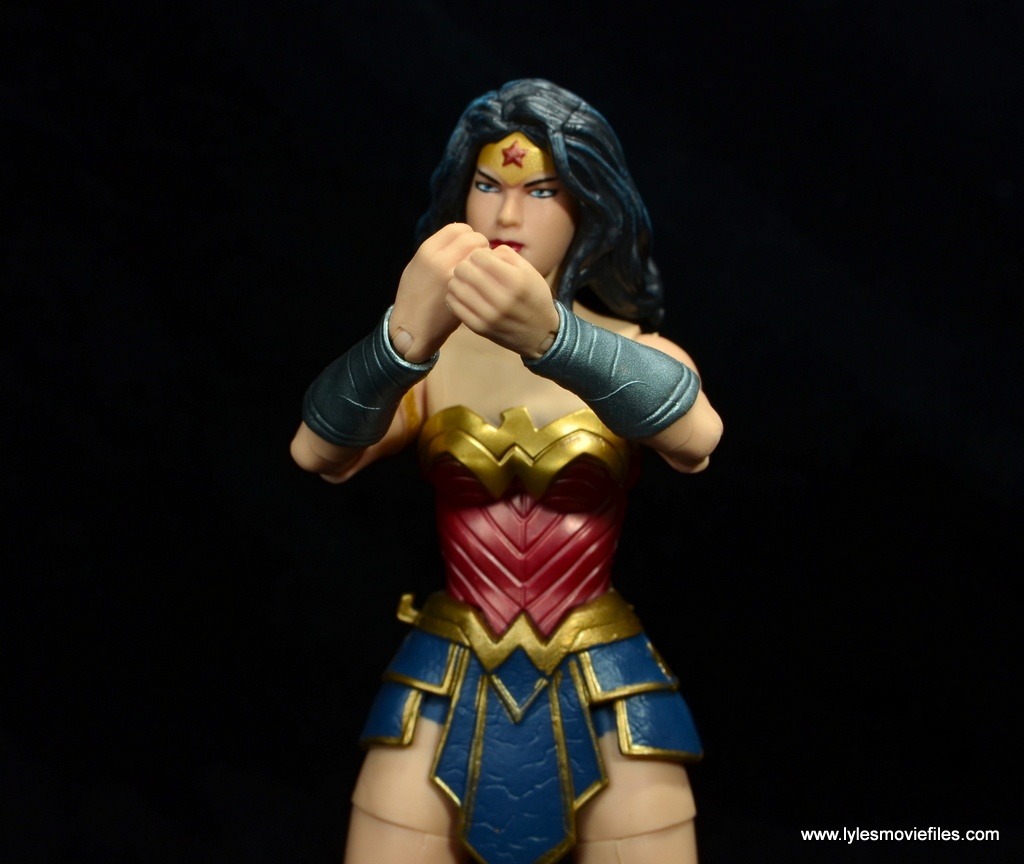 My figure’s torso was a little floppy, but that should be fixable. I didn’t have a big problem with the hair, but the neck joint doesn’t allow for much up and down movement. 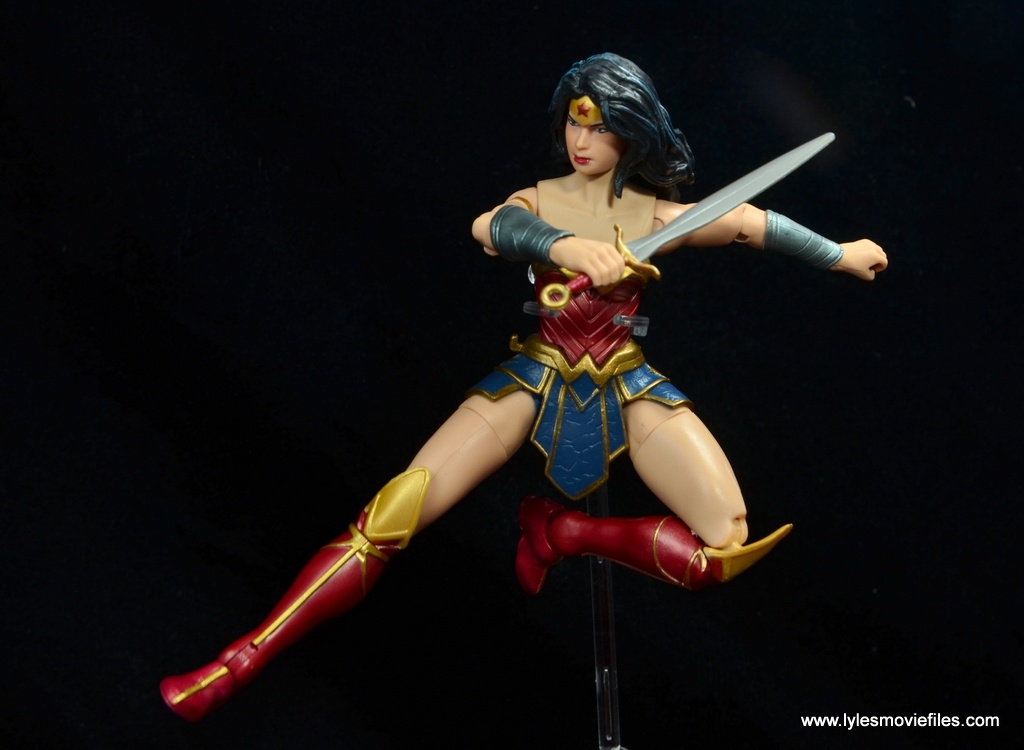 Accessories:   Mattel didn’t shortchange Diana with a nice array of accessories. That’s been a welcome change for the Multiverse line. You can actually see the effort put into the figures and the thoughtfulness of accessories. 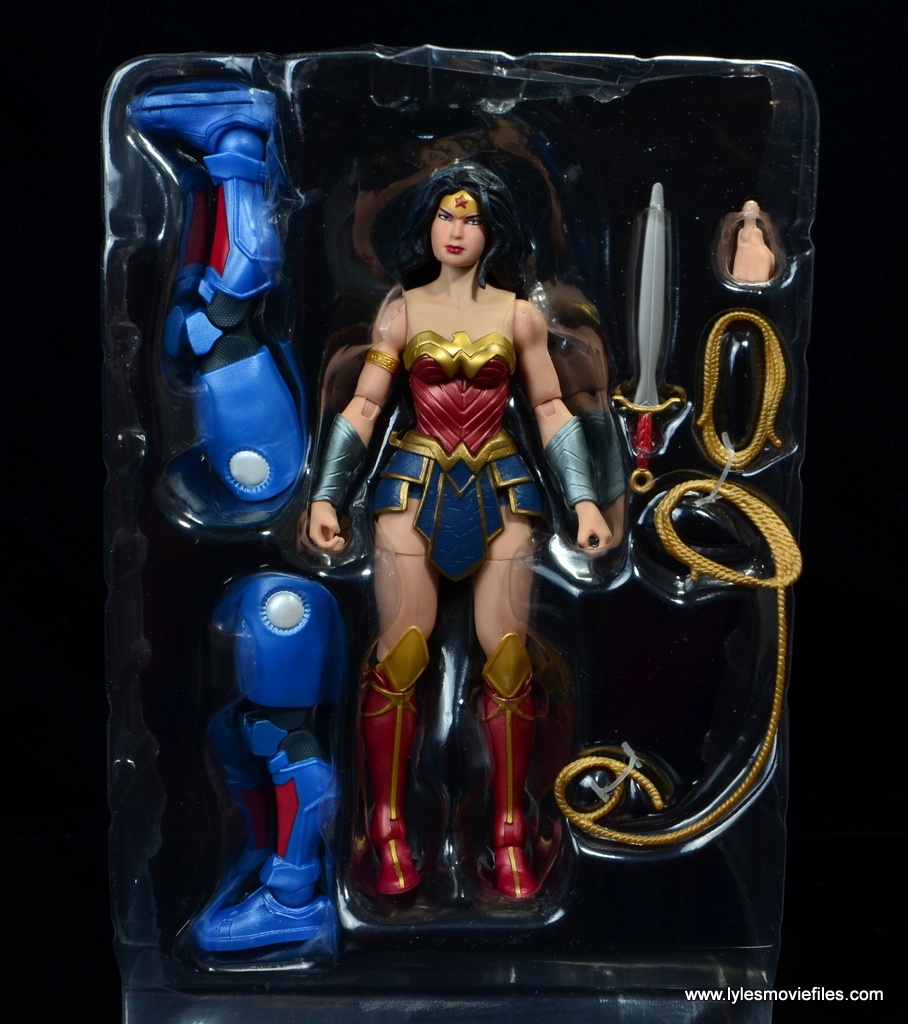 We get two magic lassos — one to rest along the belt loop. The smaller lasso doesn’t want to stay on the loop at all so it becomes frustrating. 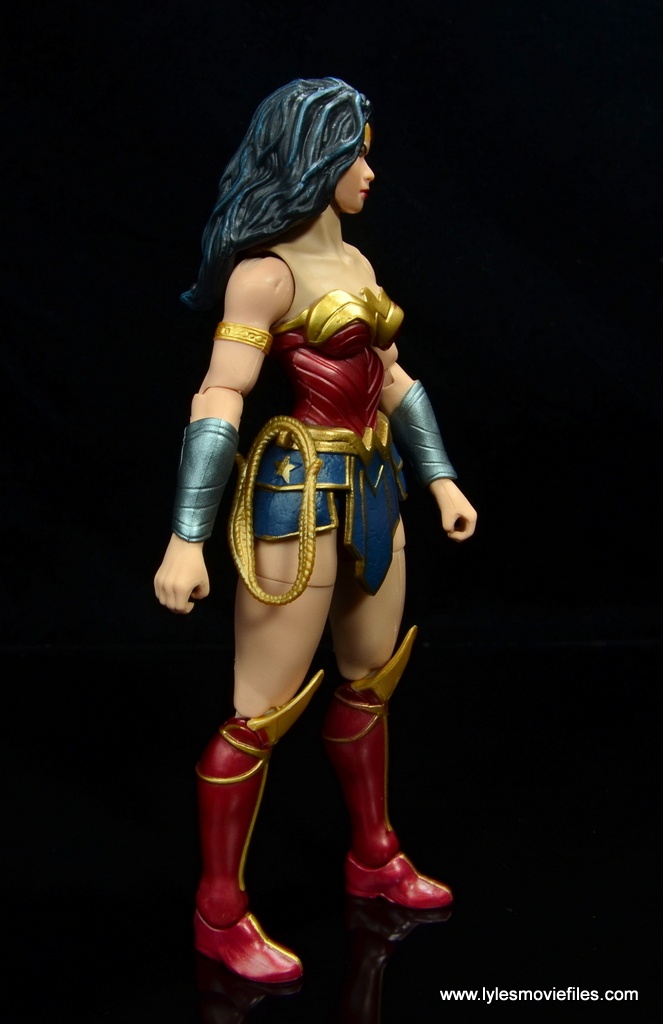 The other is extended for action shots. It doesn’t unravel, but the effort is there. I wish the wider part was more pronounced to fit around figures. Additionally, she comes with a right fist. It’s a little weird Mattel didn’t add a left fist as well.

She also has her sword. Mattel put some nice work in this as it’s got the blade, a painted and detailed hilt. How often do we get three tone swords these days? It also has a loop to fasten onto her belt. 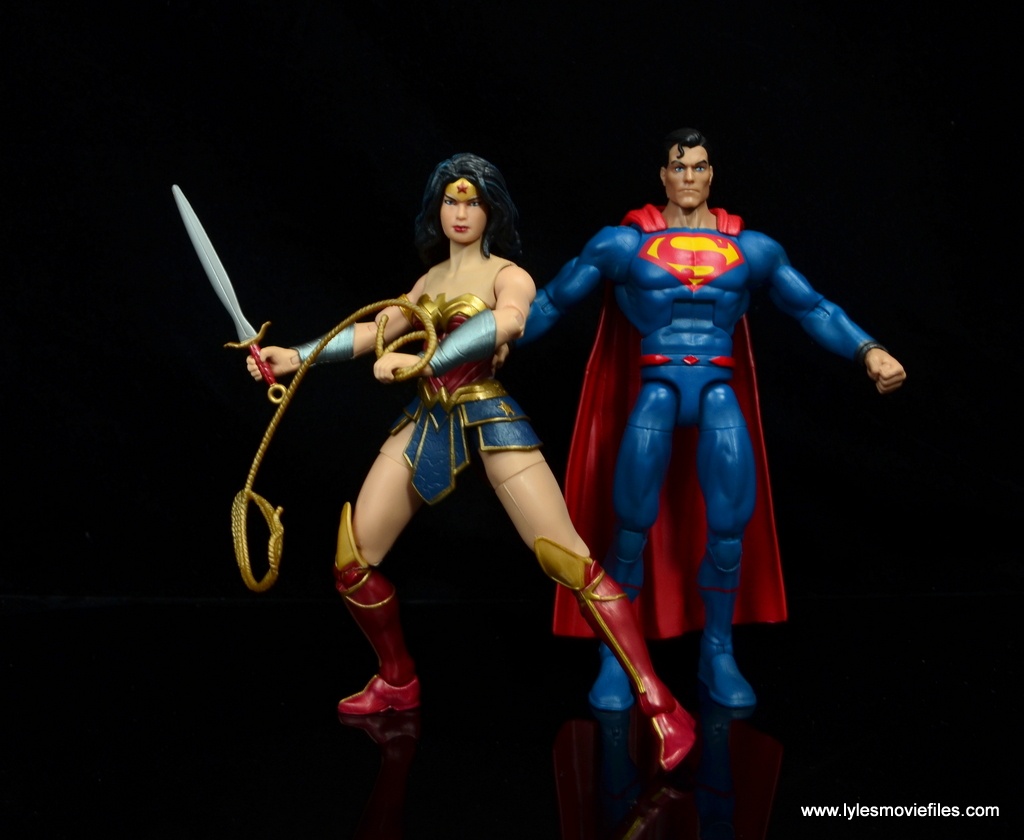 It’s hard to complain when there’s so much here, but I guess I have a few gripes. The package art shows Wonder Woman wearing her cape. While not completely essential, it helps to distinguish the Rebirth look. Also, I would have loved a shield as well. It’s not as important as the sword and lasso, but it’s become a signature part of her modern outfit.

Finally, she comes with the CAC Super Lex legs. It’s nice getting so much of a CAC/BAF with one figure. 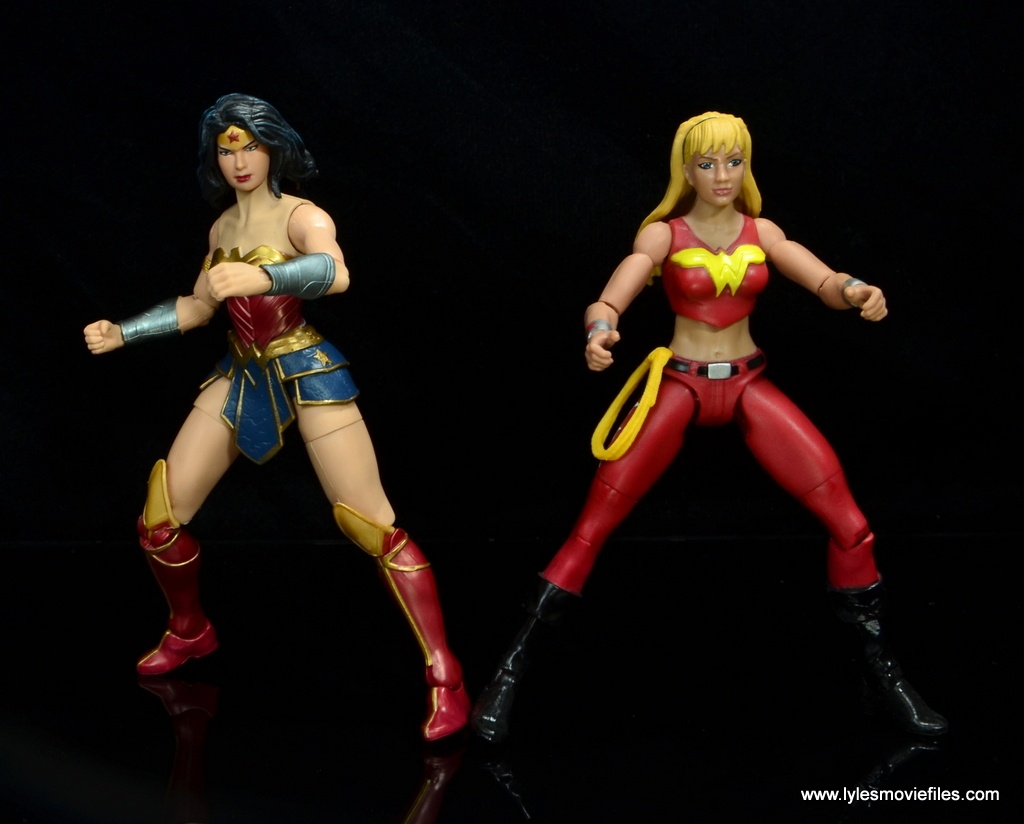 Worth it?  I got Wonder Woman for $19.99. That’s a great price for a 6-inch figure with so many accessories and enhanced articulation.

The DC Multiverse Wonder Woman is another step in the right direction for Mattel’s DC Multiverse line. In spite of the issues, I really like this figure and am looking forward to more figures from the wave. 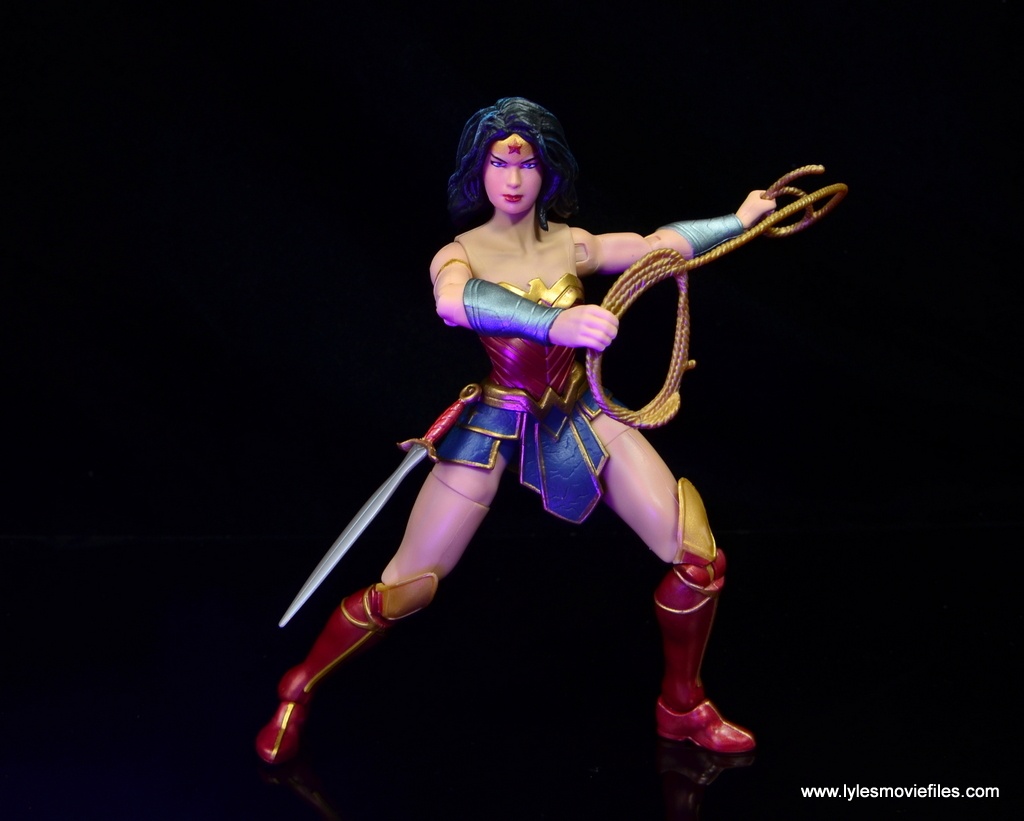 Where to get it? That’s always the question with this line. Eventually Wal-Mart and Target will get these in stock, but when is anyone’s guess. I ordered Wonder Woman from Paulmartstore.