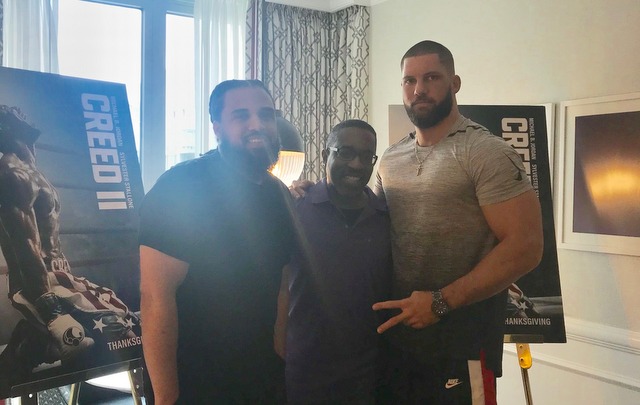 I’ll be sharing my Creed II review very soon. In short, if you’re a fan of the first one, you’ll love the sequel. Director Steven Caple Jr. and co-star Florian Munteanu were in town to discuss the film. Dealing with the expectations, what made them cry and why the Drago family couldn’t be cliche Russian villains.

Given Creed’s success did you feel any pressure to deliver on the sequel?

Caple Jr.: We both did him coming back as a Drago as a newcomer and me being a newcomer as a director, I think there was a lot of pressure behind both of us ultimately.

Munteanu: I knew I had it in me, but the most pressure I felt was not letting Steven, Mike and the whole cast down. They gave me the chance and you can’t take this chance for granted.

Caple Jr.: I had to narrow down so you won’t be sidetracked by all the commotion around so I stayed away from a lot of the material online just cause I didn’t want to try and fulfill everyone’s expectations and not be there for the talent. We realized what was really important were those small scenes that are intimate and personal that make the movie what it is and then you can add our special sauce to the fighting.

This was unusual as it was a sequel to both Rocky IV and Creed. How did you balance those stories?

Caple Jr.: It’s really making sure there is a story on this side to give you that because if it was just Drago ‘I must break you’ and that’s it and him and his dad weren’t having issues and were always on the same page. We wanted to cut that so every time you saw them you were entertained and wondering ‘Oh where are they?  Oh now they’re in Philly. Oh it’s getting close to the moment?’ Everyone had a story outside the ring. That was really the challenge. Finding all the stores that connected to the fight.

How did you juggle paying homage to what’s come before and create your own wrinkles?

Caple Jr.: I tried to grab what stood out in the other films that we could bring back like Apollo came out with big entrances. How do we do that with Creed that’s him still, but not? There’s moments where Rocky and Drago are staring each other down and it’s the same camera angles used in Rocky IV. I found the moments that were naturally there in the plot and then I went back to the Rocky and Creed movies that people responded to and then I went back and added my touch.

How did you make Viktor sympathetic?

Munteanu: All that credit goes to Steven. He wanted to not have this typical villain where you just have this killing machine with no emotion and that’s it. He really wanted to have two sides telling the background story of the Drago side and then actually there was a point where it’s not just Ivan 2.0. His key to success was to deliver real pain so I was trying to connect those bad memories from my personal life connecting it to the role so I could be as authentic as possible. It was real crying, real pain. We cried together. There was a lot of crying going on in the process.

Caple Jr.: Meeting with Sly and talking over the characters and how could we add more to the characters. How do we do that? We take them out of Russia. We gave them their story that made their story unique and dimensional. Especially when you look at the circumstances and people were like I’m sure we’re hitting on those politics and it’s like nah, it’s about human emotions. Nothing else.

You can check out the full conversation here. Warning, there’s some light spoilers from the film in the entire interview.