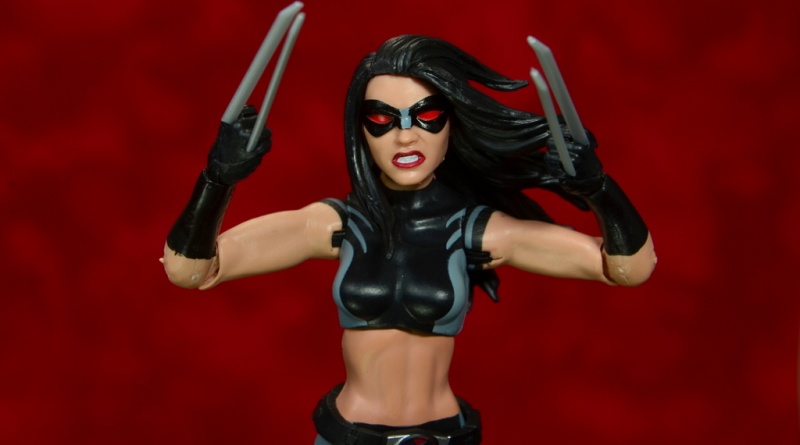 Somewhere along the way, Marvel writers got clone happy and started making DNA offshoots of seemingly everyone. One of the characters with some staying power has been X-23. I don’t like the idea of a watered down Wolverine, but X-writers have utilized her well enough that she doesn’t come off completely derivative. Her role in Cyclops’s black-ops X-Force team also made me more of a fan. It’s that look which Hasbro decided on for the first Marvel Legends X-23 figure. Let’s see if she claws her way to the top.

Packaging:  X-23 is included in the Deadpool Build A Sasquatch wave. It’s basically another X-Men wave with a slightly lighter red color scheme to differentiate it from the Spider-Man wave colors. 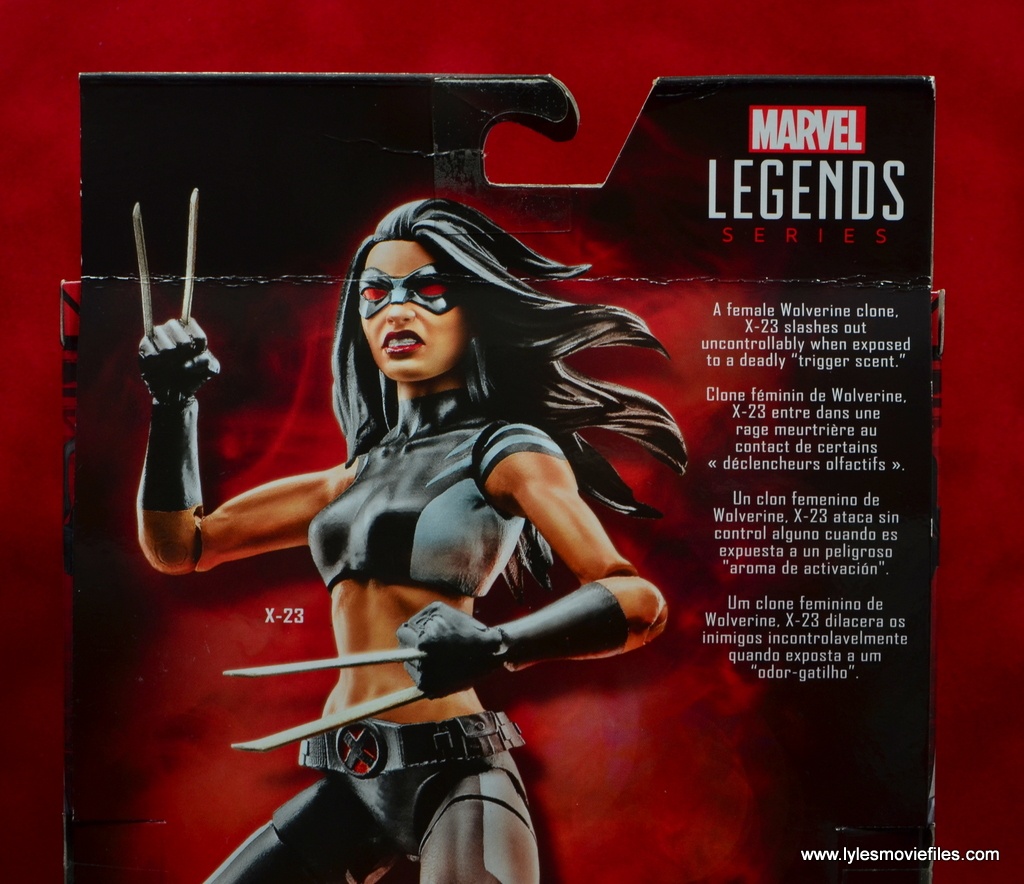 The side portrait is much darker as well, which fits this look for the character. The bio does a great job summarizing X-23, but one more sentence explaining her role with X-Force would be even better.

Likeness:  At this point in her superhero career, Laura is still young-ish, which explains her shorter stature and slim build. 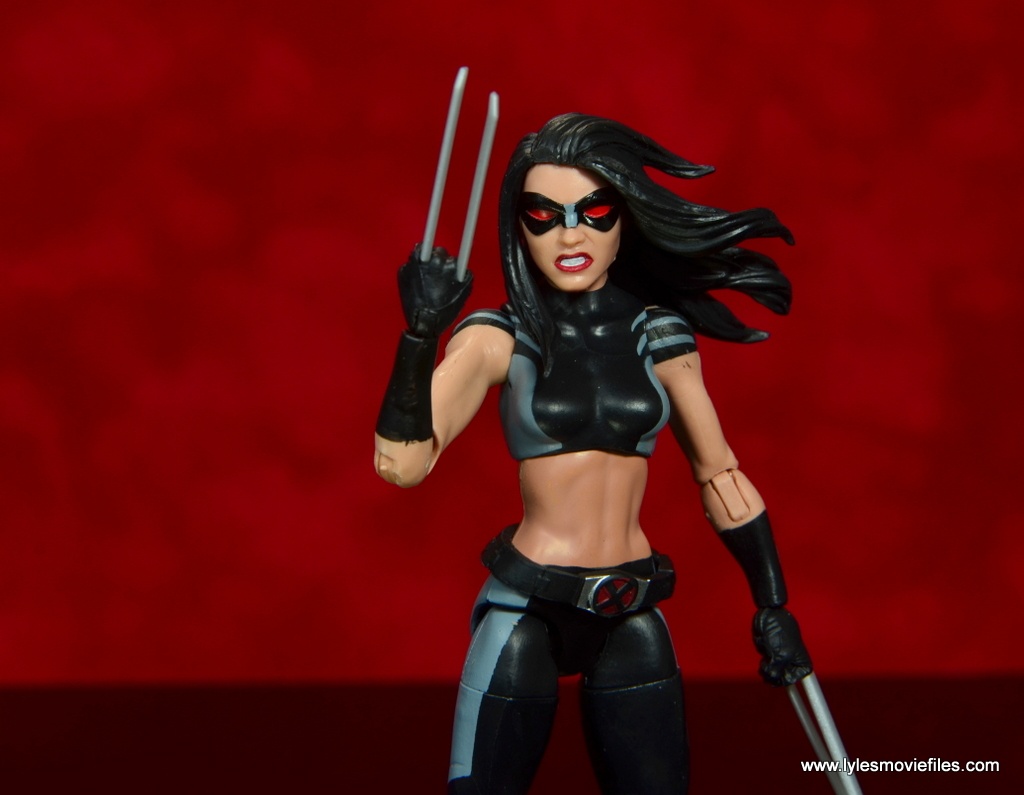 I really like the aggressive expression to show her trigger rage. It’s not something we see with a lot of Marvel Legends female figures and it looks great for X-23. I also like the windswept hair. Typically, I don’t like this more extreme headsculpt as it doesn’t fit as naturally for neutral poses, but this is what comes to mind for her especially during X-23’s X-Force days.

You’ll probably want to superglue her belt as it hangs loose around her waist. In another plus, Laura has some nicely sculpted boots, reused from Nico Minoru in the Doctor Strange line. That reminds me, I probably need to go ahead and pick her up… 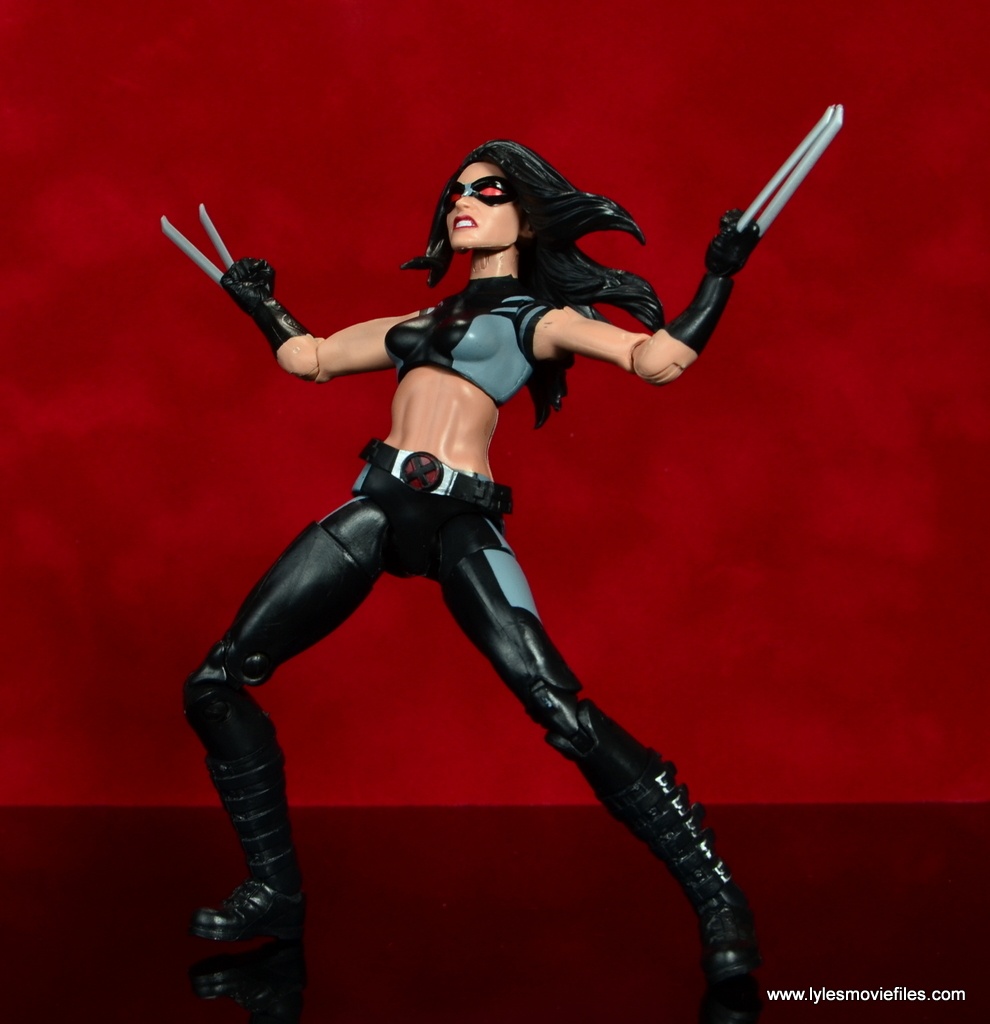 Some collectors were upset that Hasbro omitted X-23’s feet claws. I’m not invested in the character enough to care, but it’s addressed in the X-23 Wolverine figure so it all works out. Her regular two claws are styled in the same way as the more recent Wolverine figures. That means you can move them around somewhat to best position them. 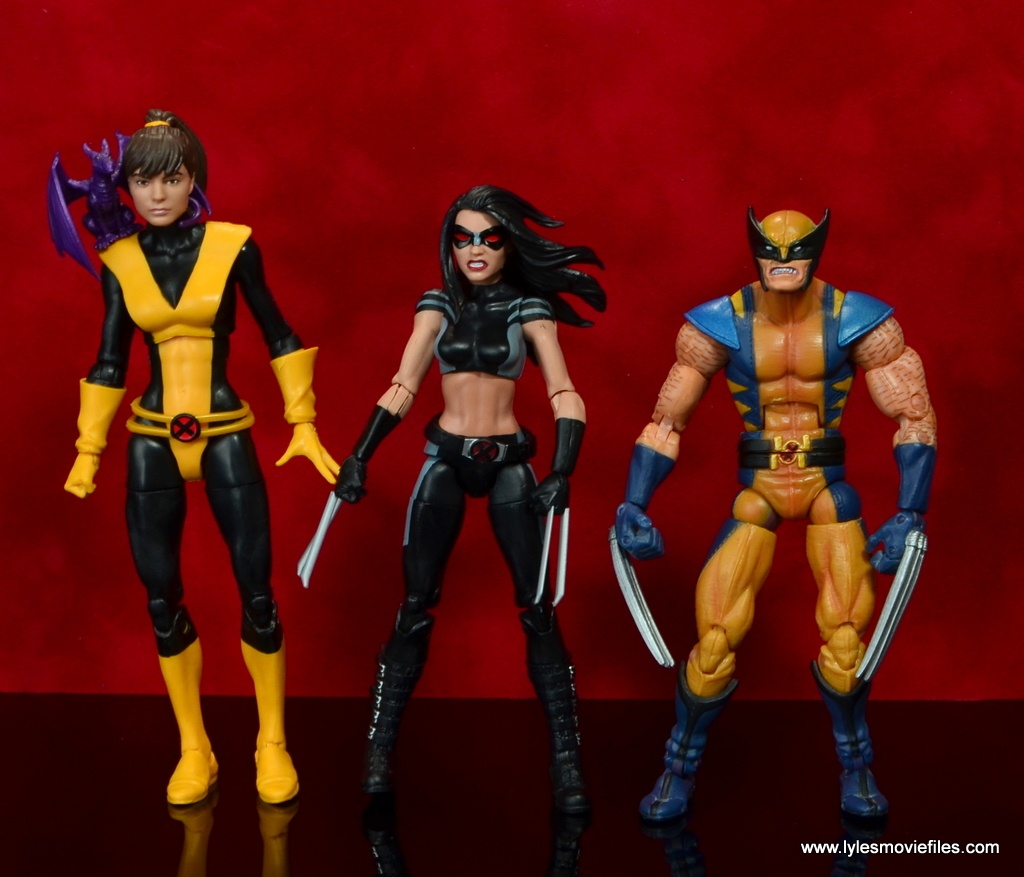 Scale:  Thanks to the teen buck, Laura is appropriately scaled shorter than the average character. That was very important here to sell the wild, younger Wolverine vibe.

Paint:  The black-ops X-Force colors make for a striking visual. Now that we’ve gotten the classic versions of the character, it’s time to get more members of the original team and a re-release of Archangel and Wolverine in X-Force colors.

Anyway, the black and grey came out pretty nicely. The buckles on the boots were well done as well. I’m glad Hasbro sculpted the mask as some of the edge work on the sleeves and gloves came out a bit rough with the line work. 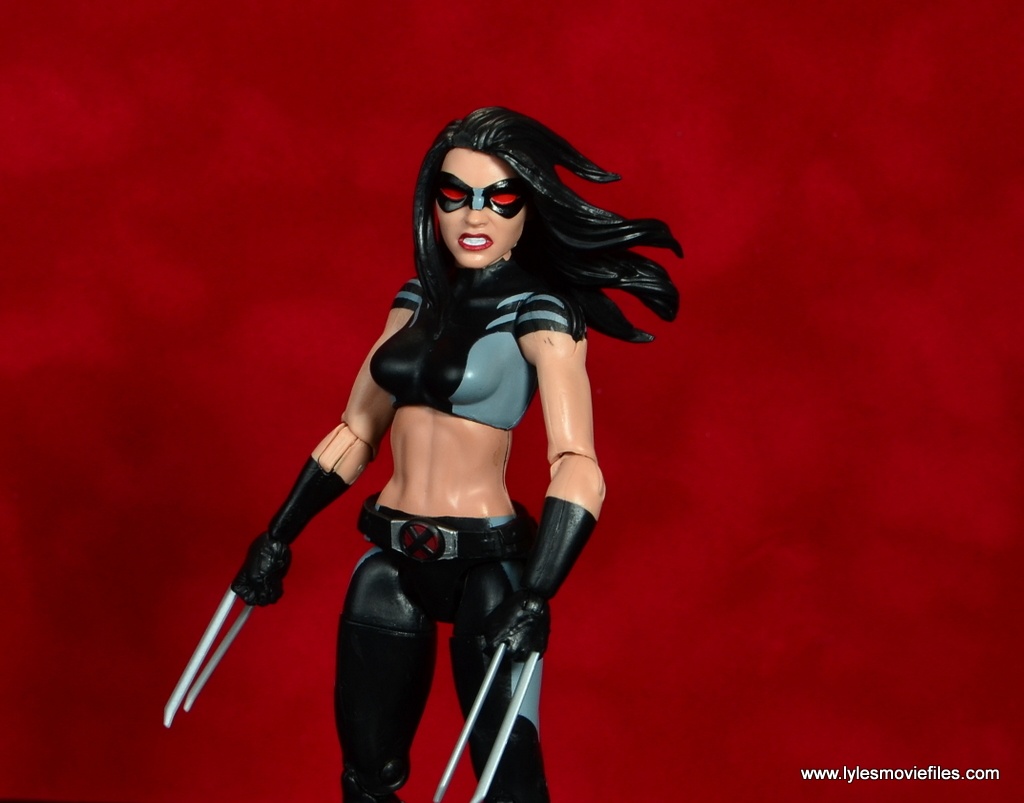 I appreciate that the red in Laura’s mask are a slightly lighter shade than her lipstick.

Articulation:  X-23 would be able to achieve a lot of the dynamic Wolverine poses with two things — a bicep joint and double-elbow articulation. You can still get some decent poses out of her, but you’ll definitely miss those two when trying to achieve maximum berserker barrage moments. The hair is soft, but does provide a barrier for more dramatic poses requiring up and down neck positioning. 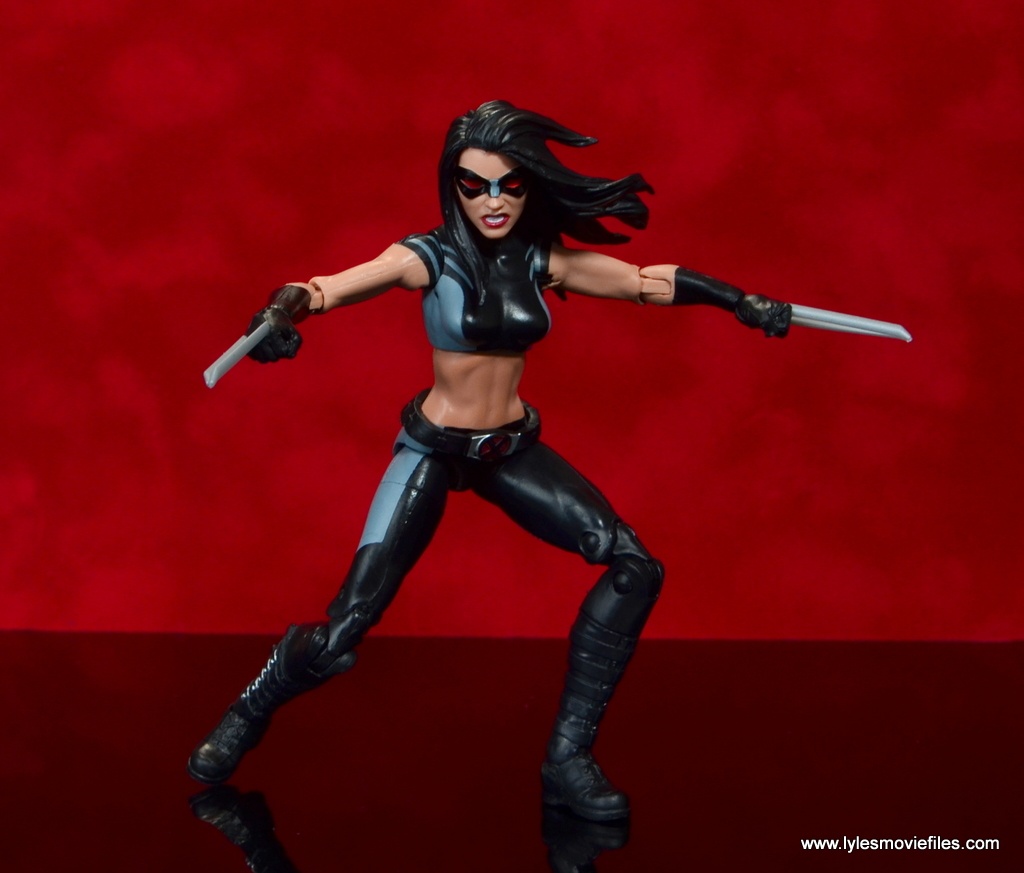 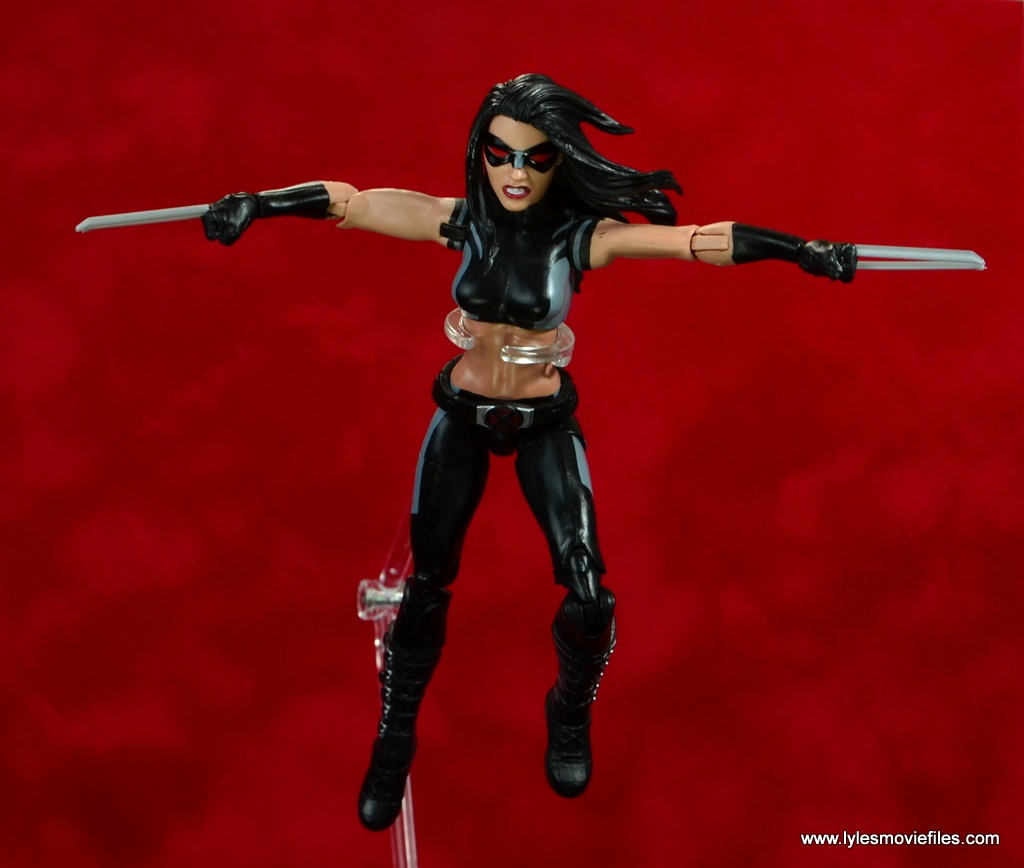 Accessories:  X-23 doesn’t come with any accessories. I have no clue what else she could have come with, but it still is a little underwhelming. 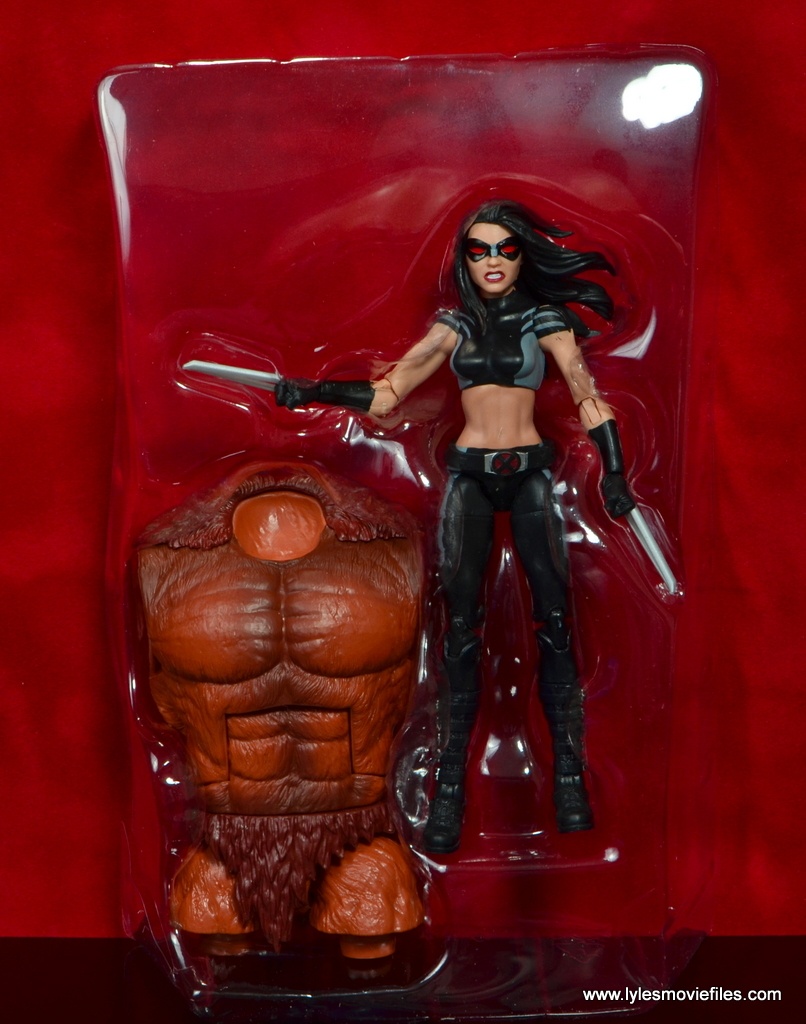 To make up for it, Hasbro packed X-23 with the torso of the massive Build A Figure Sasquatch. 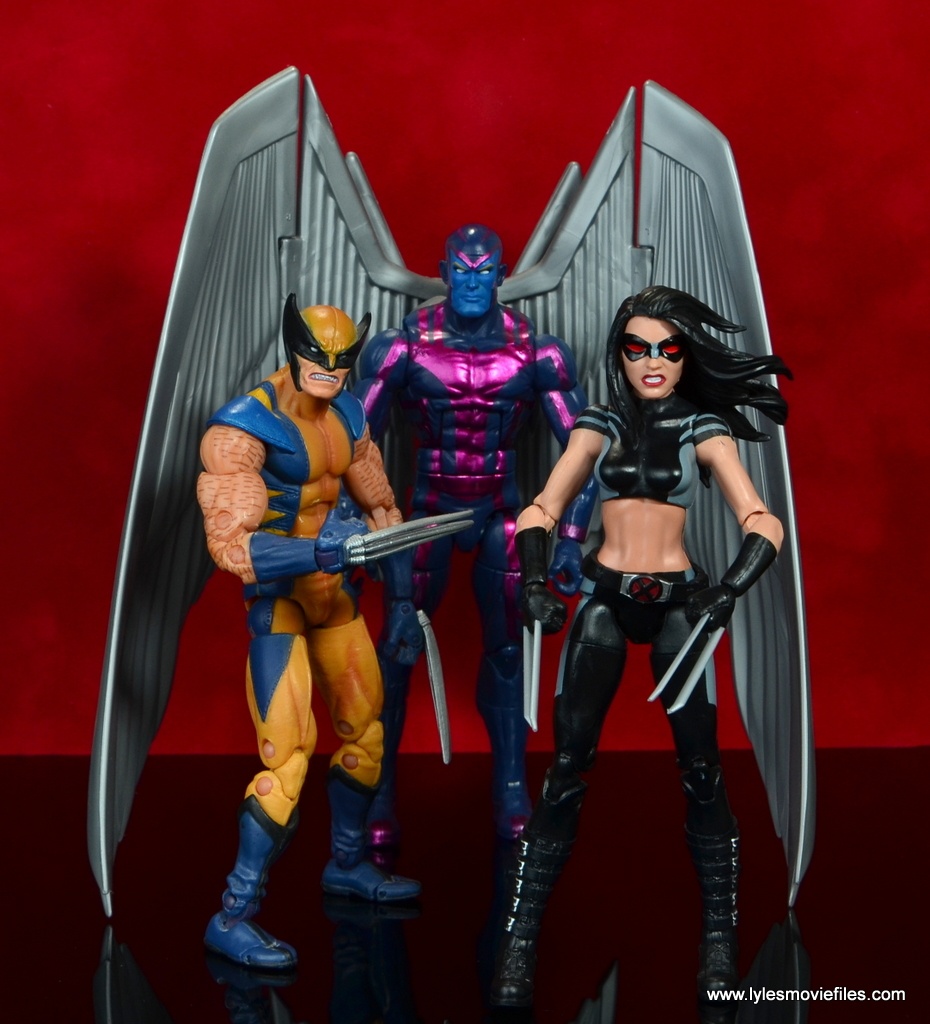 I ended up liking this figure a lot more than I thought thanks to the sharp colors and bad a$$ look. This is just a few articulation points away from being a great figure. 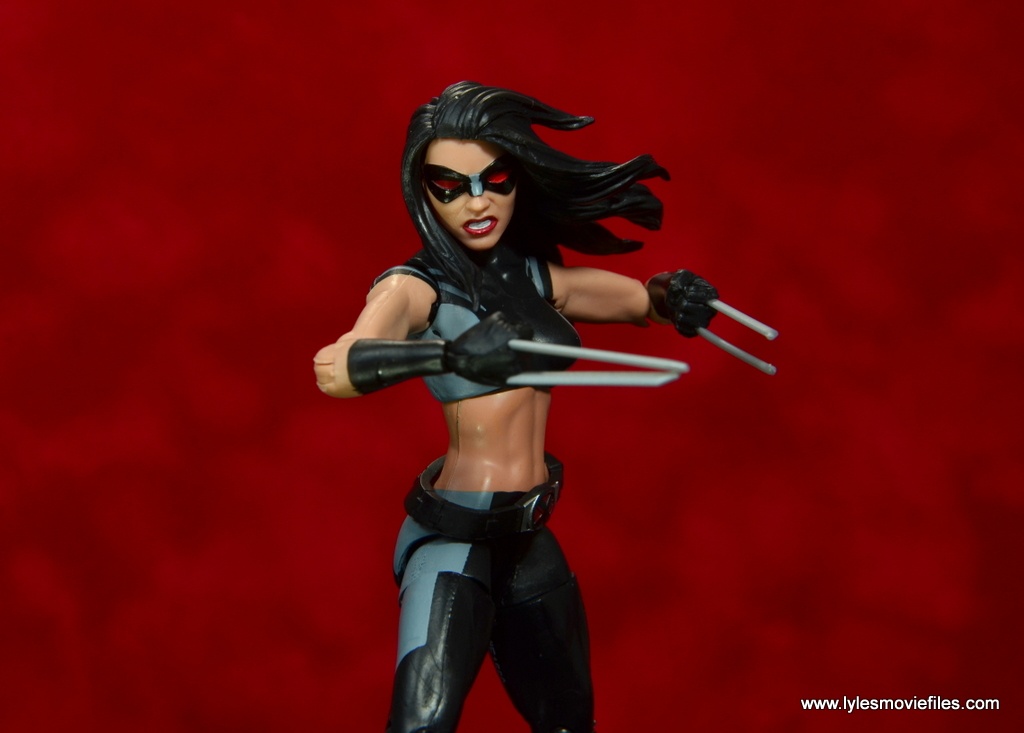