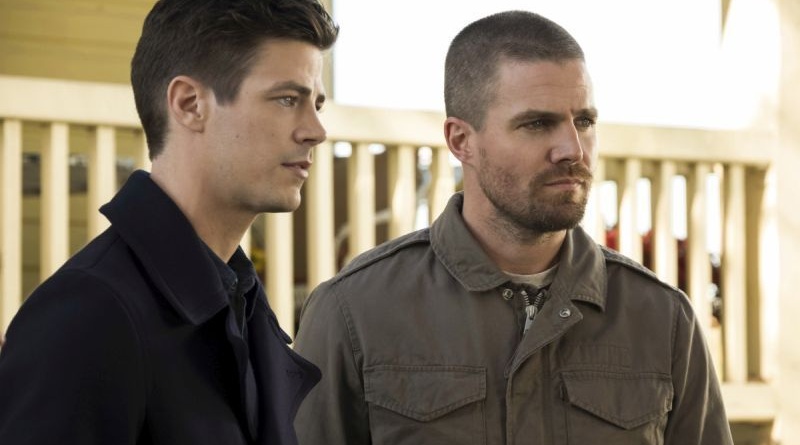 On the surface, Elseworlds Part 1 was a really fun opening chapter of this year’s Arrowverse crossover. But a few nagging problems seemed to hold it back.

Let’s get the biggest and most frustrating right out of the way. Currently on Twitter, #ElseworldsSoWhite is gaining traction and that’s not entirely unwarranted.

The CW pats itself on the back for being so diverse yet Elseworlds Part 1’s big hero rallying moment features Oliver, Barry and Kara. If the diversity is that Oliver and Barry aren’t blonde like the comics then yay(?), but it’s a bad look.

It’s why I’ve been complaining that Black Lightning should at least have been part of this crossover. Supergirl is on a different Earth, but that’s never stopped her from taking part in this big events. And it’s not like Team Flash doesn’t have a member who can easily hop into different Earths.

But hey, Black Lightning is sidelined. Both Flash and Arrow have a wide array of diverse characters. But somehow, Diggle’s contributions amount to the tired gag of him vomiting anytime he gets transported at super speed. This is the same guy that Oliver wanted to be his replacement as Green Arrow! It’s weird that a character on the show has more respect for another character than the writers.

Cisco gets back to the plucky transportation guy. And bizarrely there’s no mention of Nora, the most prominent new character this season. She’s got the same powers as Barry and would probably be helpful here. You know, if the writers gave this any real consideration they could have had William and Nora swap abilities. Oh that’s right, William is worthless.

At least Iris got a sufficient subplot as Barry’s dutiful wife. It’s interesting how in Lois Lane’s three minute appearance she talks about equal pay, cracking a big story and goes off to do something on her own. This is kinda weird, but is it possible that a woman doesn’t have to abandon everything for the sake of her man? 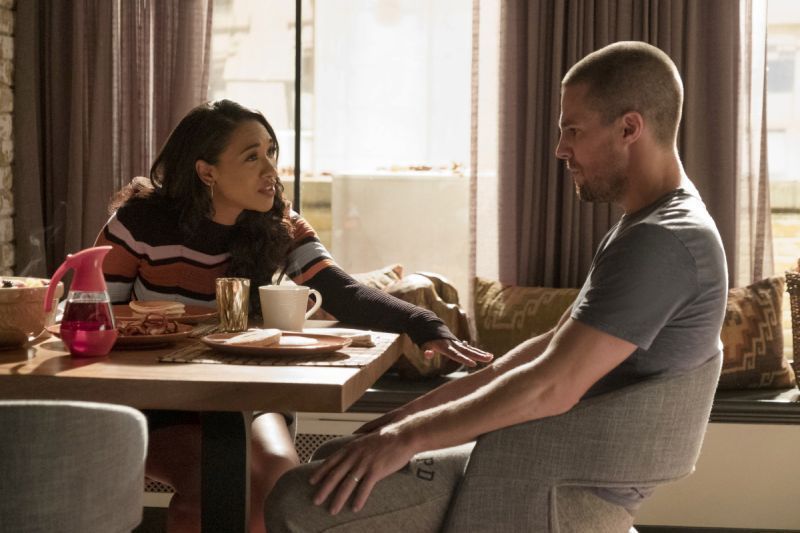 Maybe it’s from watching Titans being bolder with its casting choices. Having Gar be played by an Asian American. Hank Hall’s brother Don being biracial and the lightning rod of controversy for some idiotic reason is the orange alien being played by a black woman. Titans’ showrunners knew the toxicity of a certain segment of fanboys and didn’t lose any sleep over it. That’s diversity.

OK, I had more issues than I thought. Let’s break down Elseworlds Part 1 now.

We start off with the same opening we’ve seen on the last episodes of Arrow, The Flash and Supergirl. The Monitor (LaMonica Garrett) has beaten down the heroes of Earth-90 and The Flash is the only survivor. The Monitor then travels to Earth-1 and gives this magic, world-altering to Dr. John Deegan (Jeremy Davies).

Deegan immediately starts changing things up…or at least one thing as he’s switched Oliver and Barry’s lives. We’re picking up right after Cicada’s disappearance. I loved that Iris suggested Oliver/Barry take the day off after being off half of last season.

Easily the episode’s best moments was watching Barry and Oliver trying to learn each other’s abilities.

Stephen Amell was pretty fun playing a completely confused Flash. Seeing this season’s Flash costume on Oliver made it look even goofier. Grant Gustin is always amazing when he’s got good material and this was a terrific showcase for him.

I liked that neither could master those skills right away. It took Barry, Wally, Jesse, Nora, etc. months to master superspeed so it wouldn’t make sense for Oliver to get it on the first try. Ditto for Barry becoming an archery whiz immediately.

Barry had fun with the idea of them switching bodies right up until he realized Oliver would be in bed with Iris. That was great.

While they initially doubted them, the red skies and yellow lightning makes Team Flash reconsider. Cisco gets a vibe of The Monitor and is even more open to the possibility that weird stuff is happening. Iris stops hearing with her eyes and recognizes the real Barry. That was a quality WestAllen moment.

With no one on their Earth believing them, Barry and Oliver decide to try Earth-38. Is it weird that no one has felt the need to explore Earth-27 or 30? 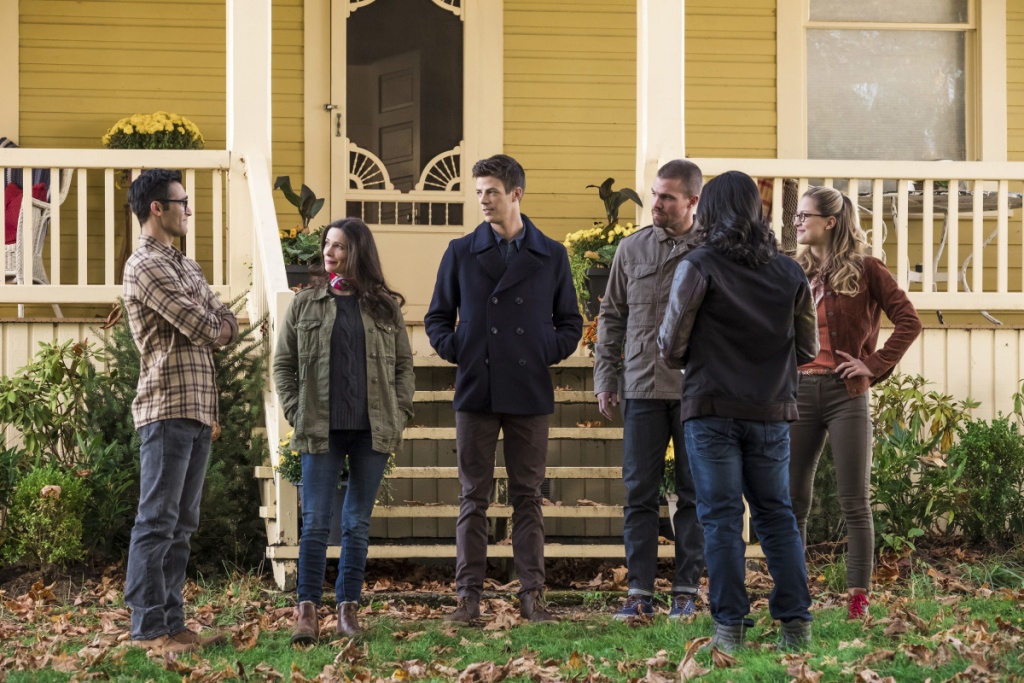 In one of the absolute best Easter Eggs we’ve ever gotten from the Arrowverse, Remy Zero’s Save Me plays as we turn to the Kent Farm.

Lois and Clark are back from their trip to Argo City. Lois wants to write about it it since she’s still having to work harder without getting the same pay as Clark. That would work in a lot of settings (cough Iris cough), but there’s no chance Perry White is so pig headed as to not make sure his star reporter isn’t his highest paid reporter.

Tyler Hoechlin is such a great Superman. It’s always a treat when he appears. Kara can tell the difference, which raises some big questions on Doctor D’s control of the multiverse.

In another fun scene, Barry and Oliver try to teach each other. Barry finally pays Oliver back for the crossbow bolts (no blood?) and the two start sniping about their relationships. I wish Barry called Oliver out for Felicity wedding crashing their wedding, but saying she invented quarterbacking was also pretty great. Lois proves a quick study and assess that Oliver is a jerk.

Barry and Oliver reach an understanding on their abilities. Oliver draws on the darkness every time he draws back his bow while Barry runs faster when he’s happy. That’s a great summation of the difference between the characters.

Right after they make up, Cisco arrives to get Barry and Oliver’s help. Ivo’s robot, Amazo, has already stolen Killer Frost and Elongated Man and there’s no better way to stop him than by bringing the two most powerful heroes in the universe. This tactic needs anyone to think it through for even a second.

Sherloque was back to being in clown mode for most of this episode, but did offer the suggestion to use a virus to kill Amazo. Or just have Cisco warp him to a world of machines? Just a thought… 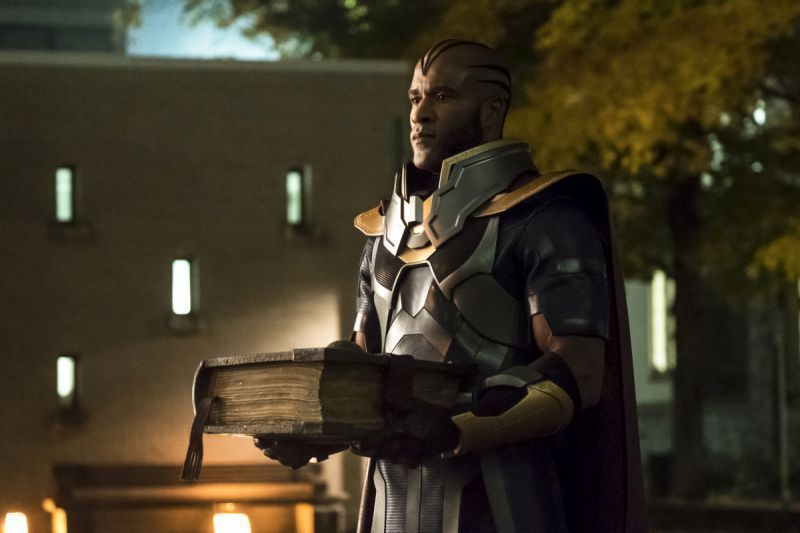 I did love the obligatory ‘Amazo you have failed this city’ line. The problem with Amazo is he always has to get defeated in this weird cheap manner despite being so over powering. Hopefully when he returns again he’ll have a better outfit than generic robot No. 4.

Although Amazo is defeated, Barry and Oliver’s problems aren’t over. Cisco offers to vibe them so they can see The Monitor and in a very cool moment, he sees them and starts trash talking that they can’t stop him. If they treat this right, The Monitor could be sizing these worlds and heroes up to test them for the real threat against the Anti-Monitor. Yes, I’m still trying to make an Arrowverse Crisis crossover happen.

Oliver recognizes the tower Dr. D and Monitor were around and now it’s time to head to Gotham City.

Elseworlds Part 1 was a solid start to the annual crossover despite some questionable missteps. Next episode we see the debut of Batwoman and maybe Diggle gets something more to do while Team Felicity runs the world?